After hearing the praises of one speaker after another, Carla Peperzak did what’s she’s done all of her 98 years.

She grabbed a shovel and got to work.

The occasion was the official groundbreaking for the new middle school that will bear her name, but it doubled as a tribute to her inspiring work.

She was 16 years old and had just graduated high school in Amsterdam when the Nazis occupied the Netherlands in 1940. Two years later, she joined the Dutch resistance at 18 and put her life in danger to help save others.

Peperzak moved to Spokane in 2004 to live near their oldest daughter and her family. Though retired, she shared an important message with students in Spokane.

Having endured the horror of the Holocaust, “she also had the courage to speak about the harrowing experiences,” state Sen. Andy Billig told a crowd of more than 100 gathered Tuesday afternoon at Mullan Road Elementary School.

As Spokane Public Schools prepared to build three new middle schools, it also cast about for worthy candidates. Out of hundreds of names, Peperzak’s rose to the top of the list. 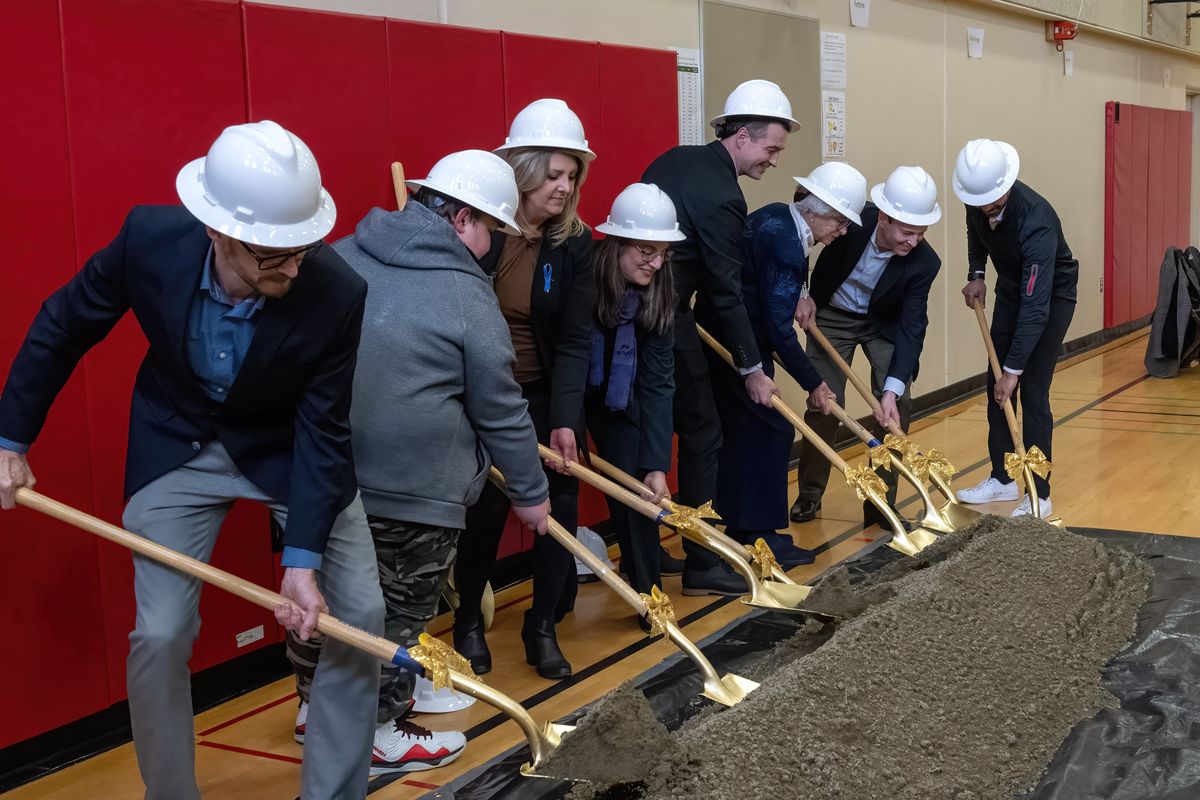 Because of the weather, the ceremonial shovel turn of soil by dignitaries was held indoors during the Carla Olman Peperzak Middle School groundbreaking ceremony, Tuesday, March 15, 2022, in the Mullan Road Elementary School gym. Building construction is scheduled to be completed in August of 2023. (COLIN MULVANY/THE SPOKESMAN-REVIEW)

On Tuesday, speakers explained why.

“Carla is very much a hero in this community, with her grace and her warmth and her willingness to tell her story,” said Rabbi Tamar Malino of Temple Beth Shalom.

Spokane Mayor Nadine Woodward praised Peperzak for “your strength, your compassion, your dedication to teaching.”

“You have inspired countless people in the city of Spokane,” Woodward said.

Andre Wicks, the school’s principal, looked ahead to the opening of the school in the fall of 2023 and the opportunity to share Peperzak’s story with generations of students.

“We’re honored to tell your story over and over again,” Wicks said.

Because of blustery winds and the threat of rain, the ceremony was held in the Mullan Road gym. Just to the west on 63rd Avenue, the site already was filling with construction equipment.

Scheduled for completion in August 2023, the school will accommodate about 850 students. The $61 million project is financed by the $495 million capital bond approved by voters in 2018 to build multiple schools and facilities.

Designed by Integrus Architecture of Spokane, the roughly 145,000-square-foot building will include a nutrition commons, learning commons, gymnasiums, a music suite and a visual arts classroom, in addition to the general classrooms.

The property overlooks the rolling hills of the Palouse to the south.

The project hasn’t been without controversy. To accommodate the new school, the city was forced to close a popular dog park.

And because the district chose to build on the southern edge of its boundaries, it will have the most affluent demographic in the district – at the expense of other middle schools.

But like the other new middle schools, it’s expected to be a major improvement over the current two-year model, as the district moves sixth-graders out of elementary schools.

On Tuesday, school board president Michael Wiser recalled the “disorienting” experience of spending only two years as a student at Sacajawea Middle School and said he looked forward to students making a “better connection.”

When complete, the school also may have a connection to Peperzak’s home town.

The Peperzak family is working to secure a commemorative sapling from a Horse Chestnut tree that stood in the courtyard at Anne Frank’s home in Amsterdam.

Frank mentioned the tree in her diary.

“We are having a superb spring after our long, lingering winter,” Frank wrote in April 1944.

“April is really glorious, not too hot and not too cold, with little showers now and then. Our chestnut is already quite greenish and you can even see little blooms here and there.”

The tree collapsed in 2010, but seeds were germinated and saplings have been donated to schools and other organizations that share Frank’s humanitarian message.

“We haven’t heard anything yet, but it looks very promising,” Peperzak told The Spokesman-Review earlier Tuesday.