Dozens of cigar-sized fish wriggled in Vince Peone’s net, their silver-green scales glinting in the sun.

A moment later, the yearling chinook salmon disappeared into the rushing brown waters of Hangman Creek. And a second after that, a juvenile bald eagle soared 50 feet overhead, as if on queue.

“That right there, that’s a huge sign for us,” the Coeur d’Alene tribal member said. “He’s flying over us to let us know that what we’re doing is a great thing.”

On Wednesday, the Coeur d’Alene Tribe released more than 500 summer chinook into Hangman Creek – also known as Latah Creek – just a few miles south of downtown Spokane. The release marks the start of a pilot study years in the making that will help assess the feasibility of reintroducing salmon into parts of the Upper Columbia River currently blocked by dams.

Chinook salmon are critically important to Pacific Northwest tribes, and they’re one of the region’s species of beleaguered anadromous fish.

Before the installation of hydroelectric dams along the Columbia River and its tributaries, chinook migrated to the Spokane River and Hangman Creek by the tens of thousands every year. Today, chinook that complete the trek from the Pacific Ocean to Washington hit an impenetrable wall when they reach Chief Joseph Dam near Brewster.

The loss of salmon comes with a host of harmful ecological effects, and for multiple tribes, the disappearance of fish that sustained their ancestors is painful and unacceptable.

In 2015, the Upper Columbia United Tribes – which include the Coeur d’Alene Tribe, Confederated Tribes of the Colville Reservation, Kalispel Tribe of Indians, Kootenai Tribe of Idaho and the Spokane Tribe of Indians – launched a four-phase effort to reintroduce salmon into the dam-blocked regions of the Columbia River.

The first phase entailed planning for reintroduction. It showed that the Inland Northwest has hundreds of miles of suitable spring chinook and summer steelhead habitat. 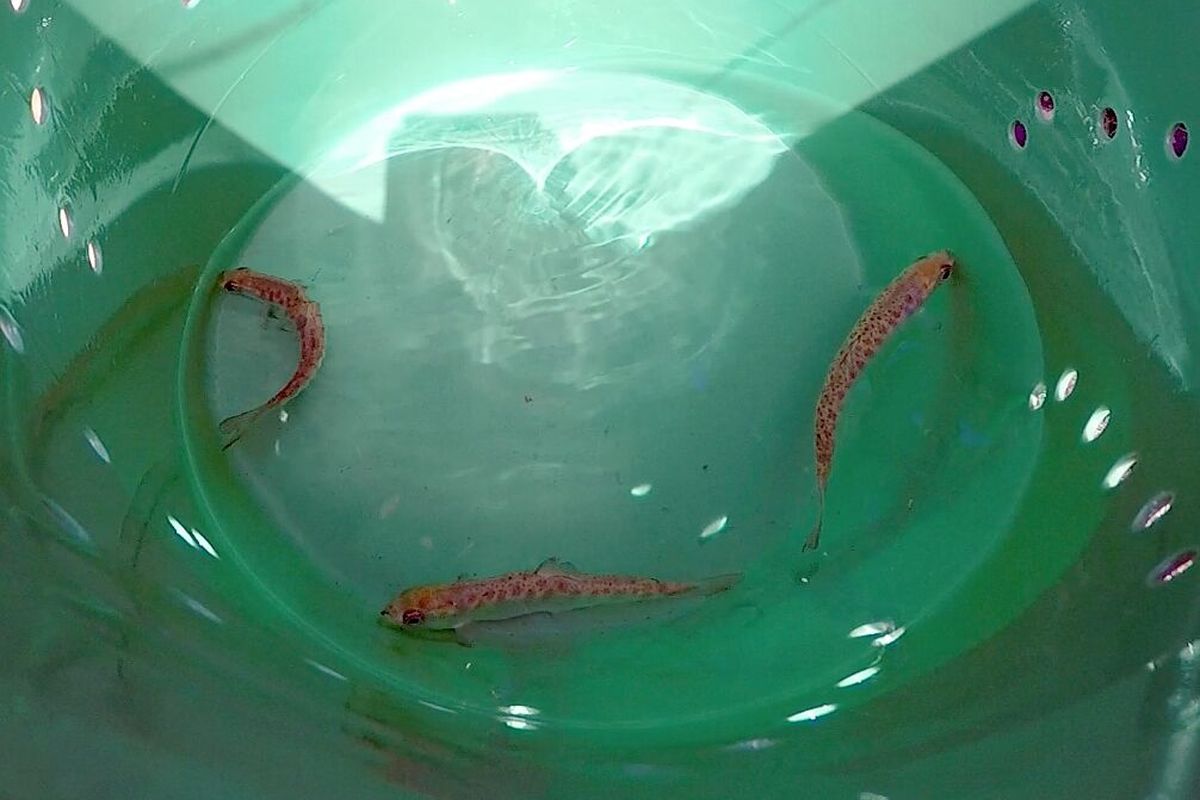 Finger-sized chinook salmon swim in a bucket before being released into Latah Creek on Wednesday, as part of a major release of tagged salmon to be tracked through the Spokane and Columbia rivers. (Jesse Tinsley/THE SPOKESMAN-REVIEW)

In a broad sense, the study will help determine if chinook reintroduction is feasible. More specifically, the pilot study will answer a few key questions about salmon behavior in the Columbia River upstream of the Chief Joseph Dam.

How many hatchery chinook will survive the journey from the Inland Northwest to the ocean? Will they pass over or through Eastern and Central Washington dams? Before crossing a dam, do they congregate in any specific areas? If they do, would it be possible to build fish passages at those sites that could help them complete their journey?

There will be seven more chinook releases in the next few weeks. Each chinook is fitted with a tag allowing researchers to collect data on the fish as they make their way past dams.

“This is data that we’re going to gather to make decisions on how reintroduction could work up here,” said Tom Biladeau, anadromous project lead for the Coeur d’Alene Tribe.

Before releasing the salmon by net and bucket brigade, two dozen or so people gathered near the bank of the creek to offer a prayer. Many shed tears.

Hemene James, a member of the Coeur d’Alene Tribal Council, said that salmon played an integral part in the tribe’s creation story.

“The salmon gave himself up so that we as our feeble human beings could survive,” James said. “They spoke up for us when we couldn’t make it. It’s time for us to speak up for them. That’s what today starts.”

Previous generations of the Coeur d’Alene Tribe lived through atrocities, Peone said. They made sacrifices so that their descendants could have a chance to bring salmon back.

“They went through that so we could have days like today,” he said.

“I’m sure all these fish will be in the Spokane River tonight,” said Bruce Kinkead, project lead on the Coeur d’Alene Tribe’s Hangman Creek restoration project. “They’re seeking out clean and quieter waters, so that’ll take them right to the Spokane.”

Some of those fish, and the thousands of others being released in the next few weeks, will likely make the arduous trek over hundreds of miles and many dams to the ocean. They’ll never return to Hangman Creek.

But someday, salmon could come back.

Maybe someday, the grandchildren or great grandchildren of the men and women at Hangman Creek will see a Spokane River full of chinook. Maybe they’ll get to net a fish like their ancestors did for thousands of years before them.

“A lot of the work we do is work that we will never see the fruits of,” James said. “But that’s the mindset that Indigenous people have had since the beginning of time, that you work for the next generation. It’s only ours to borrow, ours to hold for a little bit.”

If that day does come when salmon swarm Inland Northwest rivers again, it’ll be due in part to efforts like this, Peone said.

And there’s no doubt in his mind that day is coming.

“Those young ones will know what it means to be salmon people.”