The Spokane Lilac Festival is back this May, and a new queen is ready to lead the way.

The Royal Court, made up of seven area high school girls, held hands on stage before last festival’s queen, Julia McIntyre, announced Huber as queen and winner of the Ralph Husom Past Presidents Queen’s Scholarship. Each of the princesses received at least one scholarship. 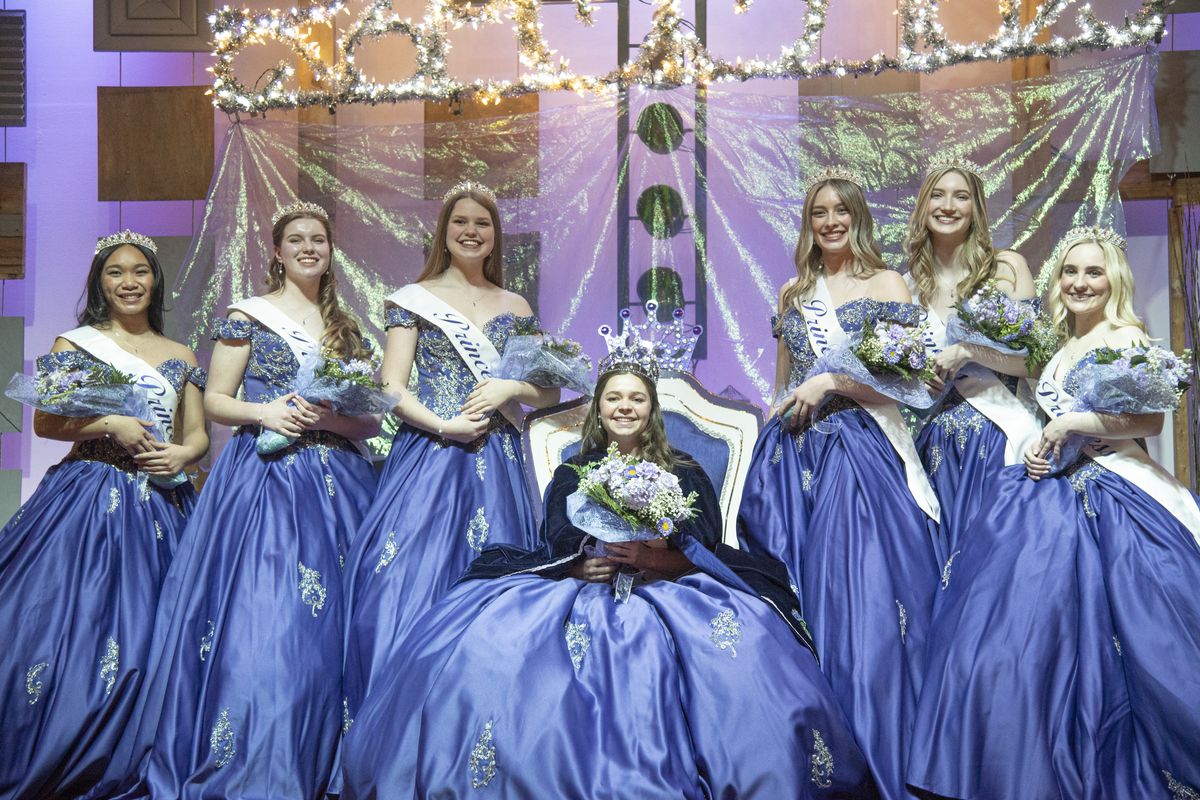 Janna Huber takes the throne after donning the tiara and cape of the Lilac Festival Queen and poses for pictures with the other six princesses: from left, Velerie Dancel; Megan Tallman; Taryn Frerichs; Ryan Ham; Shelby Zehm and Ella Hilliard, Saturday, Mar. 26, 2022 at First Church in north Spokane, the site of the Lilac Festival coronation program. Huber was chosen from seven princesses selected for the Lilac Festival court. She and the six other princesses will serve as ambassadors of the city and attend events and ride in parades. (Jesse Tinsley/The Spokesman-Review)

The crowd of roughly 150 people erupted in applause as McIntyre placed the queen’s crown on Huber’s head.

Huber then made a brief speech and sat on a throne, posing for photos with the other six princesses standing on either side of her.

“I’m so honored because these ladies are so wonderful in their own ways,” Huber told the audience. “I’m just so honored to be serving Spokane and to reinforce belonging in our town because it’s so important, and that’s what makes Spokane Spokane.”

The theme of this year’s festival is “Our Town,” and Huber and the other six royalty members – all donned in purple dresses – delivered on Saturday a rehearsed two-minute statement on what community means to them.

“The way I define it is a collaborating community where people with a variety of strengths and backgrounds come together,” Huber said. “This kind of community is welcoming, and people look out for one another no matter the circumstance. It has synergy and there’s this sense of belonging where every person has a purpose.”

The Spokane Lilac Festival, held each May, was canceled in 2020 and 2021 because of COVID-19, but organizers put on a revised parade in November that drew thousands of attendees downtown.

“This is well overdue,” 2022 festival President Alan Hart told The Spokesman-Review. “I’m very proud of the fact that we actually had the first event coming back in November out of all the events.”

Hart said 2020 and 2021 royalty members participated in the November parade.

“I’m so excited just to see every different kind of person in the community just come together and celebrate how wonderful Spokane is,” Huber said of the upcoming festival.

The latest Royal Court started their journey late last year when Spokane County high schools were eligible to present a candidate from among the senior class, according to a festival news release. Candidates participated in a five-week preparation course in character building and servant leadership, with a focus on community service, integrity and teamwork. The final seven Royal Court members were selected during an interview in February.

Huber told The Spokesman-Review the preparation was “a lot of dedication of time and getting over nerves.”

She maintains a 4.0 GPA, plays the clarinet in her high school bands and is section leader for the school’s wind ensemble. She’s on the student council and is co-captain for her tennis team at Mead.

The queen and Royal Court will represent the Spokane Lilac Festival Association at the annual Armed Forces Torchlight Parade at 7:45 p.m. May 21 in downtown Spokane. They will travel with the festival float to over a dozen community festivals across the Pacific Northwest this summer.