By Albert James The Spokesman-Review

Senate Bill 5615 was signed into law on Monday. The law designates pickleball as the official state sport.

Pickleball became Washington’s official state sport on Monday back where it all began.

Gov. Jay Inslee on Monday traveled to Bainbridge Island and signed the bill making pickleball the state sport on the court where the game first originated.

“We hold these truths to be self evident,” Inslee said. “That all are created equal. That they are endowed by their creator with certain inalienable i rights. Amongst those rights being the right to life, liberty and the pursuit of pickleball.”

According to the USA Pickleball Association, the sport was created on Bainbridge Island in the summer of 1965 by Washington state Rep. Joel Pritchard – who would later go on to represent the state in Congress and serve as Washington’s Lieutenant Governor.

One day, Pritchard and businessman Bill Bell wanted their families to make use of Pritchard’s badminton court but could not find any badminton equipment. They improvised using some ping-pong paddles, a wiffleball and a modified badminton court. Later, they introduced friend Barney McCallum to their activity, and the three men created rules for the new sport. 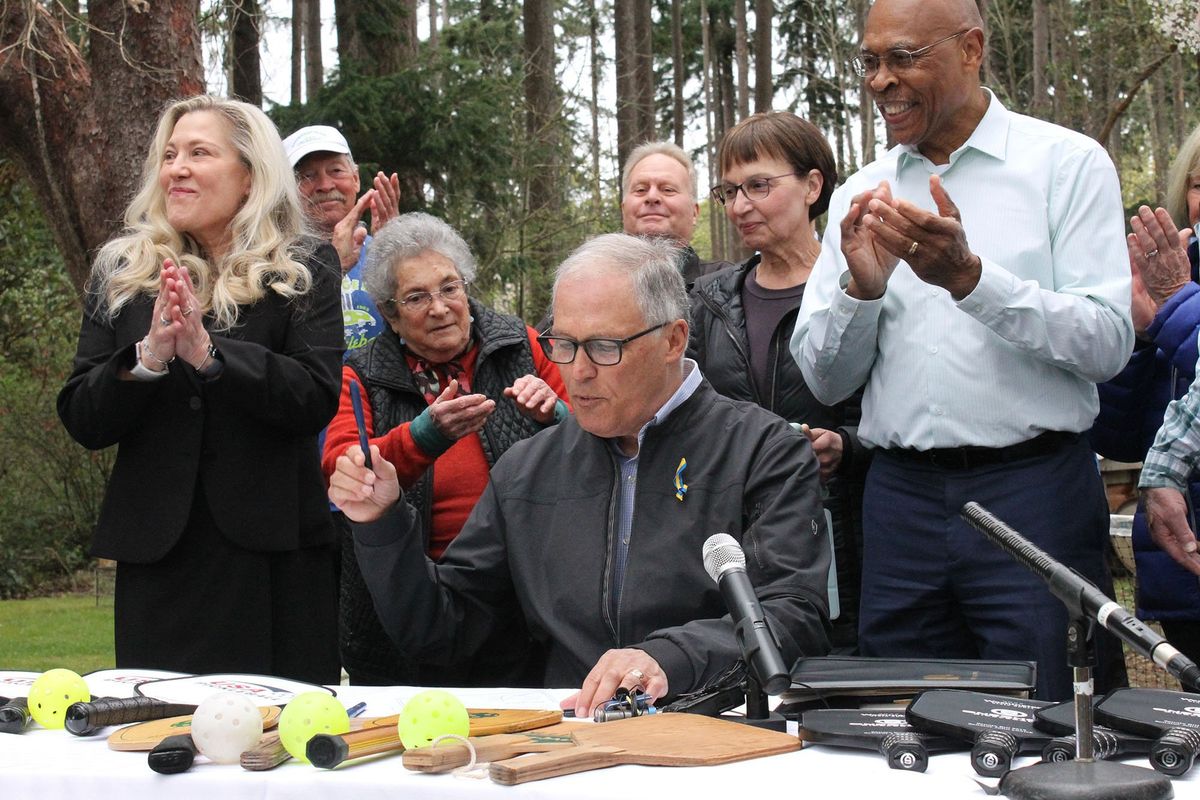 Described by supporters as one of the country’s fastest growing sports, hundreds of people sign up for dozens of pickleball tournaments all across the country. Eastern Washington University’s campus will serve as host for USA Pickleball’s Pacific Northwest Diamond Regional Tournament in early July.

Inslee described the sport as one beneficial to all Washingtonians.

The sport has taken pickleball enthusiast Roger BelAir to a handful of prisons across the country.

Intrigued by a “60 Minutes” piece on CBS about the Cook County Jail in Chicago, the retired author and public speaker said he knew pickleball could help detainees get active and learn valuable skills.

After a bit of convincing, he was invited to the facility to work with their inmates. The task was initially daunting and came with some hurdles, but he soon saw how the sport changed the jail.

BelAir recalls a conversation he had with a Cook County inmate.

“He says, ‘Look out there, Roger. You got guys that wouldn’t even talk to each other before pickleball and now they’re out there playing together and they’re laughing together,’” BelAir told The Spokesman-Review. “That’s like magic to me.”

USA Today caught word of what was going on and did a cover story about BelAir’s work in Chicago.

He was soon invited to other correctional facilities all over the country, including three in Washington. While each institution had its own dynamics at play, pickleball had a consistent positive effect on those who played, he said.

Sen. John Lovick, D-Mill Creek, sponsored the measure to make pickleball the state sport. He said the sport has been the source of a lot of conversation for him.

“Every time I type ‘pick up’ in my phone, it autocorrects to ‘pickleball,’ ” Lovick said.

Inslee said Washington now has its place in the sporting world.

“London can have Wimbledon, Rome can have the Colosseum,” Inslee said. “We have the epicenter of the sporting world today at the pickleball court where it all started on Bainbridge Island.”

Pickleball is now immortalized among other official state symbols, including the orca as the state marine mammal, bluebunch wheatgrass as the state grass and the pseudacris regilla (Pacific chorus frog) as the state amphibian.