WARSAW, Poland – Early in the morning on Feb. 24, Yaryna Valkov and her two children, Lukian, 10, and Solomiya, 7, fled from their home in Irpin, Ukraine, as Russian tanks and soldiers surged into her home country. Valkov said she’d been planning the escape for a few days, gathering documents, obsessively watching the news and packing the bare necessities.

Still, the single mother doubted Russia would invade. She was wrong, and they were some of the first to flee.

More than a month later, the trio is in Warsaw. Valkov, who was a dance teacher in Ukraine, is taking Polish lessons, and her two children are back in school, two of the more than 150,000 Ukrainian students who have entered the Polish educational system in six weeks, according to the Polish Minister of Education and Science. It’s estimated that number could grow to 700,000.

But, unlike most of those children, Valkov’s kids attend a Ukrainian school – a testament to their desire to go home.

The Ukrainian Materynka School in Warsaw was founded in 2014 by Nataliya Kravets, a Ukrainian immigrant who fled from Crimea after the Russian annexation. She has taught Ukrainian immigrants since then, but now, she’s helping refugees continue their education as if they are still in Ukraine. The hope, she said, is to give those children some consistency instead of throwing them into a foreign school system. 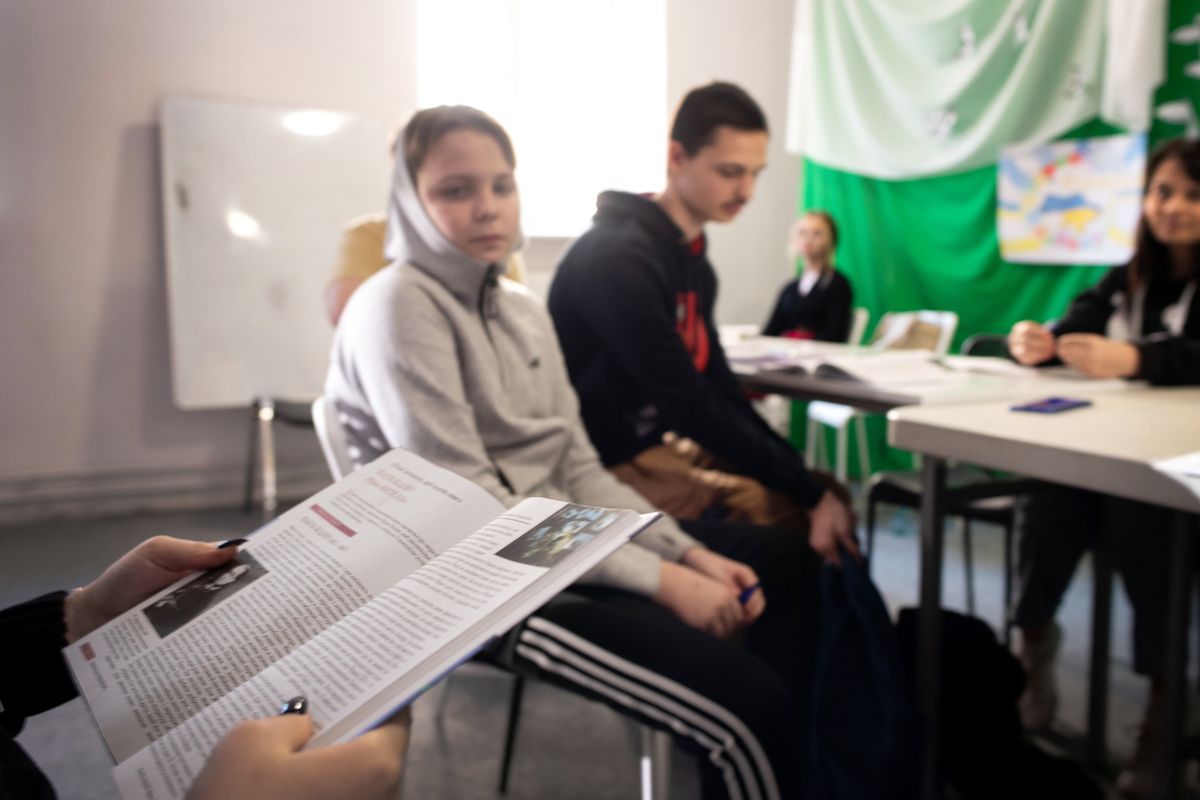 Ukrainian refugees sit for a lecture on March 21, 2022, in an all-Ukrainian school. The school, which is run by Nataliya Kravets, has been open since 2014. However, since Russia invaded Ukraine in February the school’s enrollment has swelled from 250 to more than 900 in kindergarten through 11th grade. (Eli Francovich/The Spokesman-Review)

Integrating Ukrainian refugees into the Polish school system has been tricky. Most of the Ukrainian refugees don’t speak Polish, and education systems differ in how they’re structured and what they teach. Meanwhile, Poland has one of the better education systems in Europe and routinely outscores the United States in reading, math and science, while Ukraine routinely ranks in the middle of the pack, according to the Programme for International Student Assessment. At the same time, Poland has struggled to find enough teachers since the pandemic, with an estimated 13,000 teaching vacancies nationwide prior to the start of the war.

In September, the school had 250 students. As of last week, there were more than 900 students in the school’s three locations. Next to her desk in a cramped office sits a pile of applications, she estimated 1,000, a visual representation of the need. She has 40 teachers, many who also are refugees from Ukraine. School runs from 9 a.m. to 2 p.m., but teachers stay around until 5 p.m. Kravets has brought therapists to the school, and 1,000 meals have been donated by the U.S.-based World Central Kitchen. Despite that support, the educational and emotional need remains overwhelming.

“The kids are crying,” she said through a translator. “They want to go back to Ukraine.”

That need is apparent nationwide. Earlier this month, the Polish Ministry of Education and Science temporarily changed its rules, allowing more students to be in a single class.

“We are here to take care of them at least for the time being. We are aware that the majority of them or maybe all will return to Ukraine,” deputy education minister Dariusz Piontowski told a Polish public radio station earlier this week.

During that same interview, Piontowski said Poland would welcome those refugees who opted to stay in Poland. About 2 million children have fled Ukraine in the past six weeks of war. Of those, 1.1 million came to Poland. It’s estimated an additional 2.5 million are displaced within Ukraine. And the need likely will increase.

“The situation inside Ukraine is spiraling,” UNICEF Executive Director Catherine Russell said in a statement Wednesday. “As the number of children fleeing their homes continues to climb, we must remember that every single one of them needs protection, education, safety and support.”

UNICEF estimates 100 children have been killed and 134 injured in the conflict.

Valkov, the dance teacher from Ukraine, said she was glad she fled when she did. Her kids have been sheltered from “seeing the disaster.” A friend of hers left on March 19 with her husband and daughter. As they drove, they were caught in a firefight, her husband killed and her 5-year-old daughter shot near the heart. Now, that little girl is in a hospital recovering.

“She danced in my dance studio,” Valkov said of the child.

Valkov has started applying for jobs, although she is doubtful of her chances, considering she doesn’t speak Polish. More than anything else, she hopes she can go home. Every day, she calls friends still in Irpin checking if her apartment still stands, she said in an interview last week. As of then, it did.

Spokesman-Review reporter Eli Francovich is in Eastern Europe to cover the stories of people with ties to Spokane and those affected by the war. Francovich’s articles will appear throughout the week. His trip was paid for largely by Spokesman-Review readers who have donated to the Community Journalism Fund and through the newspaper’s Northwest Passages event series. To help support this trip and similar newsroom efforts, contributions can be made at www.spokesman.com/thanks