Dressed in camouflage, 9-year-old Corinne Holmes positioned herself against fallen pine trees for cover, with a shotgun on standby.

Her father, Joshua Holmes; Marie Neumiller, executive director at Inland Northwest Wildlife Council; and Grant Samsill, wildlife conflict specialist at Washington Department of Fish and Wildlife, accompanied her for a turkey hunt last month on a steep mountainside near Colville.

Samsill had set three turkey decoys and made several slate calls to try to draw turkeys into Corinne Holmes’ shotgun sight. It was cold and raining and the sun had already started to set behind the mountain.

Samsill located turkeys at the top of a ridge but was unable to convince any of them to venture down the mountainside toward the group.

“A big part of hunting is not getting discouraged,” he said. 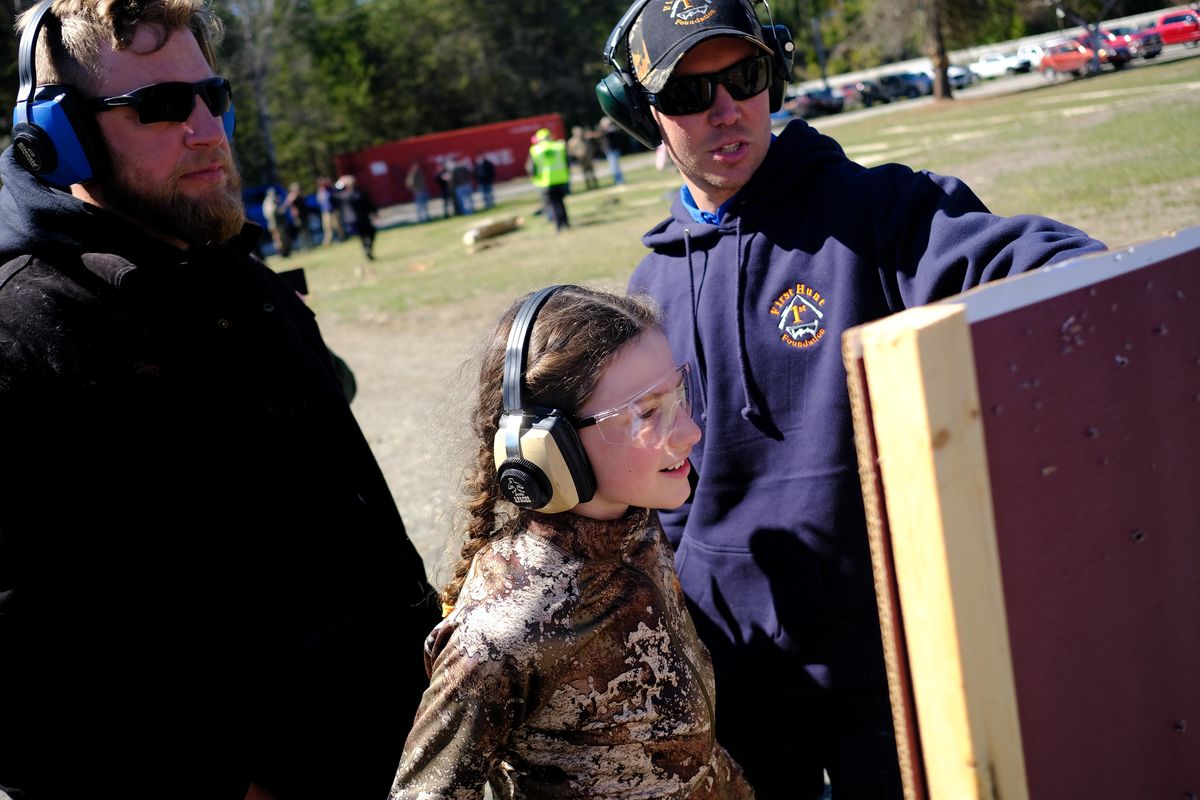 Apparently, the Holmeses were not discouraged as Joshua Holmes shot a turkey the next night, April 23, near Lake Roosevelt outside Kettle Falls.

Samsill said he, Neumiller and the Holmes’ were well camouflaged in some brush waiting for turkeys that night.

Samsill called it a “textbook hunt,” saying the turkeys responded to every call he made.

“They walked right into us,” he said.

Joshua Holmes took the shot with a 12-gauge shotgun from 20 to 25 yards after Corinne Holmes passed on taking the shot.

Joshua Holmes said he was extremely proud of his daughter for passing off the shot to him since the bird was at a distance outside her comfort zone.

“He took a beautiful tom,” Samsill said. A tom is a mature male bird.

Joshua Holmes said the turkey is packaged at home and they plan to make turkey tacos with it.

The Holmeses were two of about 30 hunters who attended a mentored turkey camp hosted by the Washington Department of Fish and Wildlife and other groups, like First Hunt Foundation, April 22-24 at the Locust Grove Campground near Kettle Falls.

Staci Lehman, WDFW communications manager, said the hunters, many of them first-time hunters or new to turkey hunting, came from all over Washington.

Joshua and Corinne Holmes traveled 5½ hours from their home in Snohomish, about 35 miles north of Seattle, to attend the camp.

He said he hunts deer and is introducing his daughter to hunting.

This was her first hunt and she has her own hunting tag, or permit, to kill a turkey.

“I’d never turkey hunted and she’s a new hunter, so I figured it’s a great program for her to get involved in,” Joshua Holmes said.

He said the hunt with his daughter was an awesome experience and he plans to go on many more.

Lehman said the state agency initiates one-on-one mentored hunts where an experienced hunter will take a new hunter on a hunting trip and teach tips and tricks of the trade, but it had never done a mentored hunting camp of this scale.

The first day of the camp mostly consisted of instruction, including hunting ethics, turkey calling and target shooting.

A row of hunters, most of them wearing camouflage jackets and pants, shot 12- and 20-gauge shotguns from a seated position late in the morning of April 22 at the Fort Colville Gun Club.

Aaron Garcia, WDFW South Central Region hunter education coordinator, told the hunters almost all turkey shooting is performed from a seated position with their back against a tree. Some used shooting sticks to rest their rifle and others rested their elbow on their knee before firing at the targets about 30 yards away.

The hunters were aiming for the head and neck of their paper turkey targets. Shooting a turkey in the body often won’t bring the turkey down and the hunter might end up wrestling the large bird.

“They’ll beat the crap out of you,” Garcia said.

While one group of hunters was target shooting, the other group received turkey calling lessons from Richard Mann inside one of the gun club’s buildings.

Mann, Save the Hunt coordinator at the Washington chapter of the National Wild Turkey Federation, laid out the various calling instruments, like slate and box calls, on a table in front of the hunters and their mentors.

Mann performed the calls, demonstrating their pitches and volumes.

“You’re going to find the ones you like,” Mann said of the calls.

He said many turkey hunters, especially new ones, call too much, but added there are times they have to “hammer” the call.

“I have better luck finding them and then calling sparingly and getting them to come to me,” he said.

Mann, who is in his 33rd year of turkey hunting, said hunting turkeys is addictive and that he loves the challenge.

He said mentoring turkey hunters is a way to get them into the sport that he and many others love.

“There’s something about watching somebody get that first bird,” he said. “It’s a blast.”

Neumiller, the executive director of Inland Northwest Wildlife Council in Spokane, which helped sponsor the event, said working with first-time hunters is her favorite because they are curious and excited.

“It’s just fun to relive that excitement of the first experience,” she said.

Samsill said he got into hunting later in life and it became a passion.

He said he mostly learned through reading and watching videos and by trial and error in the woods.

He said he wanted to give back and help people navigate those steep learning curves and teach them lessons that took him years to learn.

He said hunters should take time to scout the hunting ground before the hunt.

He recommended scoping the area a couple of weeks prior to the hunt so they know it well.

“Typically, the people who are successful are doing that,” he said.

Patience was his second tip. He said turkey hunters need to be calm and willing to sit for a while to allow the birds to come to them with a good call.

The most common law violation he and WDFW police deal with is trespassing, Bahrenburg said. He said hunters should learn landownership in the area they’re hunting, adding that many cellphone apps and the county assessor’s website will show property ownership.

Ernie Gregory, an area landowner, told the hunters that those who ignore “no trespassing” signs drive him nuts.

Gregory recommended they ask private property owners a few days before the hunt if they can hunt on their land. Chances are he’ll allow it in those instances.

“We want you guys to come out,” he said.

Bahrenburg said hunters should always know their target and backstop.

A lot of first-time hunters are quick on the trigger. They see something move and shoot because they’re so excited to kill a turkey, often resulting in a friend or fellow hunter being shot.

Mann told hunters at the Kettle Falls campground to identify their target completely before pulling the trigger. The best equipment is common sense, he said.

“Use it out there,” Mann said.

Bahrenburg said another violation first-time hunters often commit is not tagging their game immediately upon killing it.

He said many hunters are thrilled they finally kill a turkey and want to drive home quickly to show their friends and family. But they forget to fix their hunting tag to the turkey.

Washington’s spring turkey hunting season started April 15 and ends May 31. Male turkeys and turkeys with visible beards can only be hunted during that time.