KELLOGG – Every year on May 2, Stanley Payler stands beneath the 13-foot-tall statue of a miner commemorating his 91 co-workers who died in the Sunshine Mine disaster.

This year, 1,000 people joined Payler on the 50th anniversary of the fire that traumatized North Idaho’s Silver Valley and changed the mining industry.

“Part of you can forget it,” Payler said. “The other part never will.”

On that sunny morning in 1972, 173 miners descended into the mine for their shifts. Just before noon, miners began to notice smoke. Conditions quickly worsened and only 80 miners, largely from the upper levels of the mine, were able to escape.

Payler was a “cager,” trained to run every type of lift in the mine. He immediately volunteered to help.

He was joined by rescue teams from nearby mines, such as Bunker Hill.

“It was just about this time we were called out from underground at Bunker to come up here,” John Connell, said Monday morning.

Connell, 85, was called in to help rescue the trapped miners.

It was “just a big disaster,” Connell said. “You never want to do that kind of thing.”

He remembers the following two weeks as “long, tedious and stressful.”

Rescuers worked for nearly two weeks but found only two survivors. The other 91 trapped men perished.

Bill Delbridge remembers waiting for word of his loved ones as the search went on.

Delbridge, now 75, worked at a local grocery store after deciding mining wasn’t for him. But his father William Delbridge Sr., 54, brother Richard L. Delbridge, 24, and his cousin, James Michael Johnston, 18, all worked at Sunshine.

Delbridge had tried to convince his brother to go into another line of work, but the money was good and he enjoyed the work.

“He liked mining and he got to work underground with my dad,” Delbridge said with a smile.

All three men worked at the 5,200 level of the mine, one of the last to be reached in the rescue efforts.

“It was terrible,” Delbridge said of the waiting.

Ultimately, all three men were found dead and were some of the last to be removed from the mine.

During the past 50 years, Delbridge has worked to make sure the memory of the miners who were lost will be remembered.

The tragedy “rippled through Idaho,” Little told the crowd.

Union leader Paul Sala reminded the audience of the somber weeks waiting for news of the rescue efforts. Sala, then in grade school, recalled a radio playing quietly in the corner of all his classrooms; lessons were widely ignored as the students strained for news of the mine.

Once, an administrator asked one of his classmates to step into the hall and the whole class knew, “a father had been found.” 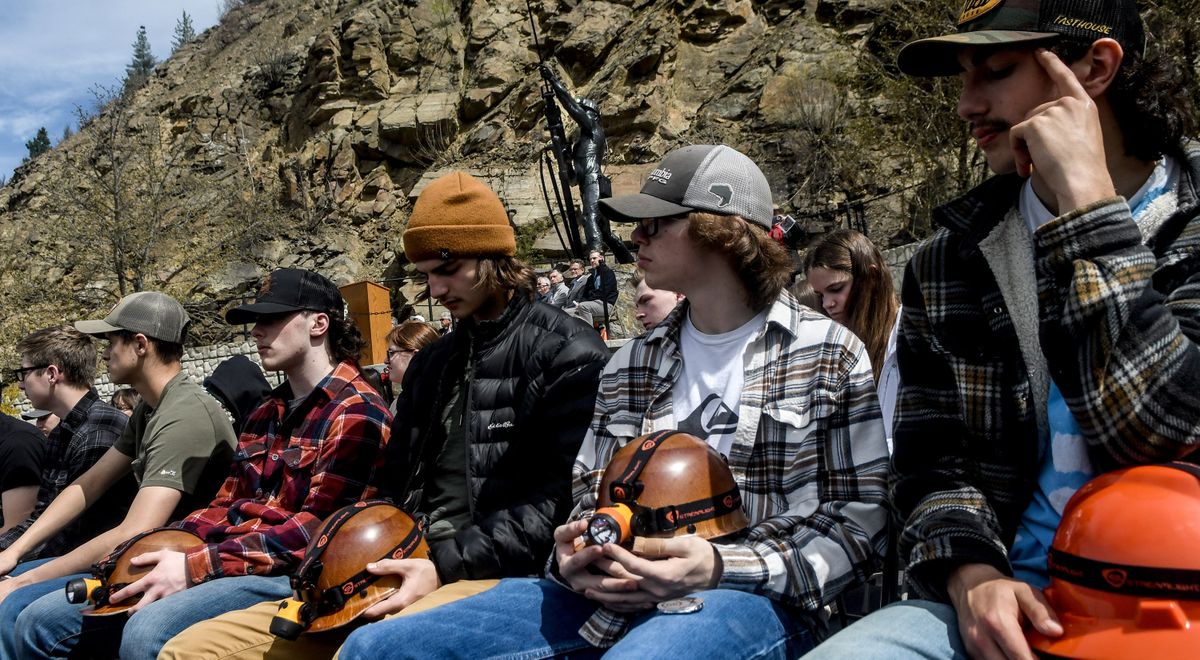 Students from Kellogg High school hold miners hard hats representing the 91 men that died during the 50th Anniversary Memorial Ceremony of the Sunshine Mine disaster in Big Creek on Monday, May 2, 2022. (kathy plonka)

Students of a new generation learn about the disaster in school, keeping the history of their community alive.

Kellogg High School students participated in the memorial Monday by turning out the headlamps on 91 miners’ helmets as the names of those lost were read to the crowd.

Onlookers could be seen brushing away tears, often followed by a supportive embrace from family members or friends.

The tragedy brought about change.

“The standards of the day were not sufficient to make sure every miner makes it home at the end of the day,” Peter Cheesbrough, chief executive officer of Sunshine Mine and Refining, said.

Cheesbrough’s company is working to get the mine operational again after a long pause. He reminded the group of how important the industry is in creating things used in everyday life.

“If it isn’t grown, it has to be mined, ” Cheesbrough said.

After the scheduled speakers, families got up to reminisce about the lost miners. The line snaked down the ramp up to the statue and into the crowd, with sometimes five generations represented as they stepped up to the mic.

Loretta Turback was just 11 when her father, Juan R. Serrano, 36, died in the mine, leaving behind seven children.

“It’s still as sad as it was the first day,” Turbak said.

Her mother, Julie Serrano, had to work three jobs to support her children.

As the oldest daughter of the family, Turback took over as a second mother to her siblings.

“The only thing that kept pushing me through was my dad in my head saying, ‘You can do this princess,’ ” Turbak recalled with tears in her eyes.

She attended the memorial with her siblings and her granddaughter, Melina, 12. The young girl said she has heard about her great-grandfather ever since she can remember and hoped to “honor” him by attending.

For some families, the event was a rare chance to honor the loss that continues to plague their lives.

Keri Orozco’s dad, John W. Davis, died on his 28th birthday in the mine. Orozco was only 2.

It’s “emotional,” Orozco said through tears. After having her two daughters, Orozco said the loss of her father was renewed as she came to understand parenthood and missed sharing that with her dad. As her girls become adults, she sees her father in them.

Her father had brown eyes, Orozco has brown eyes, “and this is my brown-eyed girl,” she said, pointing to her daughter, Kiki Orozco, 19. “And I just know he would get a kick out of that.”

“The hole it leaves in your life,” Orozco said, “never goes away.”