Alec Gomez carried a shutout into the fifth inning and Connor Coballes provided the needed pop as Gonzaga topped Washington 5-2 on Monday at the Patterson Baseball Complex and Coach Steve Hertz Field.

The 12th-ranked Bulldogs (29-13) have won the previous five meetings over the Huskies (18-24). GU has also won five straight against UW in Spokane.

Gomez has thrown 14 innings with one earned run on five hits and nine strikeouts in the Bulldogs’ last two victories over UW.

“He just does a great job of mixing and matching,” assistant coach Brandon Harmon said. “He’s not going to overpower anybody … he just does a really good job of landing pitches at all counts.”

Coming into the game, Gomez’s previous longest outing this season had been three innings, due to a back ailment limiting him earlier this season.

“Just mixing speeds, I think they knew kind of what I was trying to do, (but went) off speed heavy, I think I surprised them with good location,” Gomez said. “I missed one and it went over the fence. I feel like I executed pitches, got ahead as well as I could.”

GU had the first chance to threaten the Huskies in the second as Ezra Samperi dropped a two-out double into the right-center field gap, but Savier Pinales grounded out to shortstop to end the inning.

In the third, Connor Coballes kept UW out of the hit column when he fully extended behind second base to snare a Josh Urps liner.

It wasn’t the only web gem for the Bulldogs as Enzo Apodaca and Cade McGee provided the crowd with highlights behind Gomez. 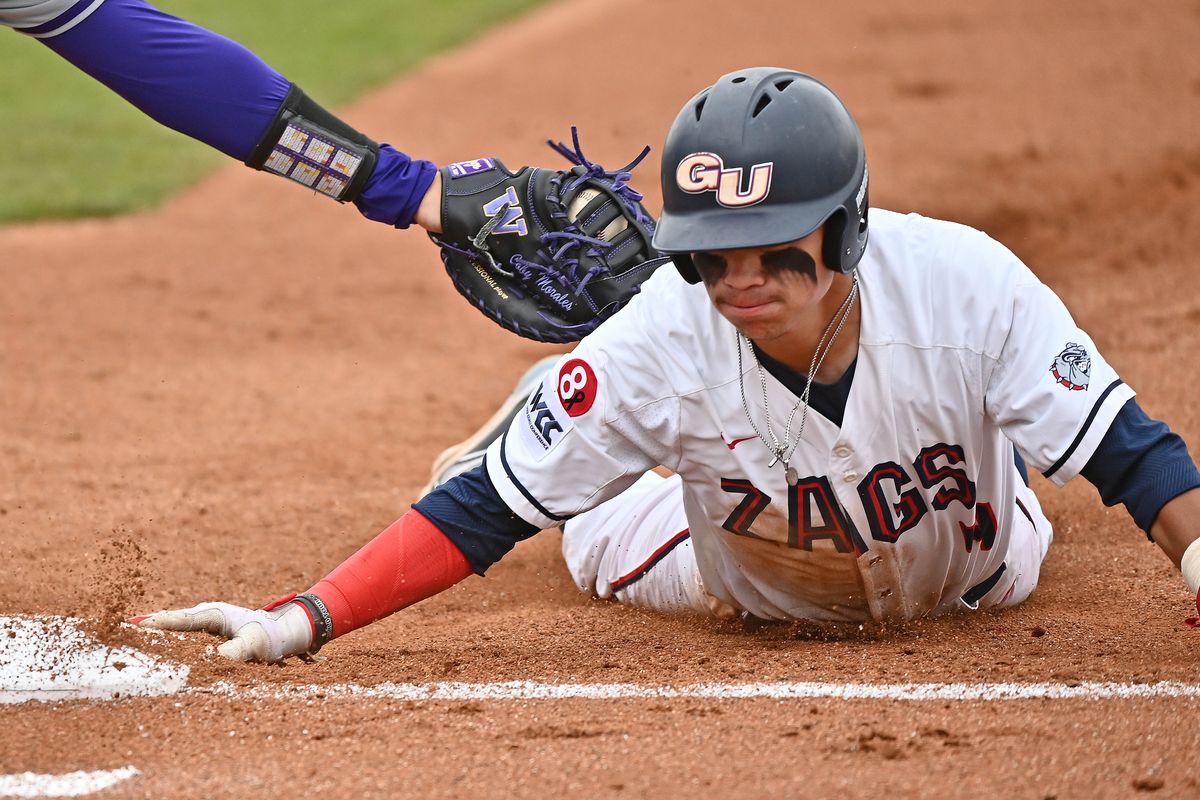 Gonzaga this baseman Connor Coballes (4) dives under the tag attempt of Washington first baseman Coby Morales (26) during a college baseball game at Patterson Baseball Complex and Coach Steve Hertz Field on Monday May 2, 2022 in Spokane WA. (James Snook/For The Spokesman-Review)

Apodaca tracked a Johnny Tincher liner into the left-center field gap and at the last second, lunged into the air and grabbed the out.

In the eighth, McGee reacted to a Tincher one-hopper that had a funky bounce toward his face, but he backhanded it and fired a strike to first.

“It’s just fun playing behind a defense like that, today they really had my back, made some outstanding plays for me and I pitched with a lot of confidence knowing that they’re laying everything out on the line,” Gomez said.

But dominant pitching and rock-solid defense doesn’t matter if runs don’t find their way across the plate.

In the third inning, Coballes lifted a ball into the blustery sky and the east-blowing wind helped carry the ball over the left field fence for a two-run homer.

It was the first extra base hit and homer in a Bulldog uniform for the former Gonzaga Prep Bullpup.

“He’s kind of been an unsung MVP of the team,” Harmon said. “He’s played lockdown defense at shortstop and has just been a really consistent piece in the middle of our lineup.”

On the mound to start for UW was redshirt sophomore Stu Flesland – a former Mt. Spokane standout.

“I’ve known Stu since he was probably six years old and he’s a guy that we recruited a little bit after he transferred out of Boise State and he did a really nice job for them tonight, he just made the one mistake to Coballes,” Harmon said.

The only run Gomez gave up was in the sixth inning when Cam Clayton smacked the first pitch of the inning that narrowly cleared the left field wall for his fourth home run of the season.

In the bottom of that inning, Grayson Sterling just missed out on a grand slam as his fly ball to left field needed an AJ Guerrero jumping catch at the wall to keep it from turning into extra bases.

It was enough to score Tyler Rando from third as the Zags extended their lead to 3-1.

After another walk, Savier Pinales lined a fast ball to center as two Bulldogs made their way home to help the lead grow to 5-1.

But UW didn’t go away quietly as the Huskies picked up a run in the ninth.

GU reliever Nico Zeglin got the first two Huskies out via a strikeout and groundout before allowing a walk, RBI double and walk.

Gonzaga coach Mark Machtolf jumped out of the dugout, pointing out at the bullpen, ushering in Jacob Rutherford.

Rutherford came in and slammed the door shut, striking out the only batter he faced to earn his first save of the season.

The Zags and Huskies were slated to play March 1, but an avalanche warning on Snoqualmie Pass squashed those plans, meaning the two intrastate schools will finish the season with the Bulldogs nabbing the lone win.

“It feels good … kind of a big brother, little brother thing,” Gomez said. “We definitely try to handle our instate schools. We like to continue to schedule with them and play against them.”

Bulldogs are back in action on Friday at 6 p.m. for the first of game of a three-game home series against Santa Clara.