A crowd protested in downtown Spokane against the U.S. Supreme Court’s possible overturning of the Roe v. Wade case that established a right to abortion nationwide.

The “Rally for Choice” protest in front of the Thomas S. Foley United States Courthouse drew about 125 people Tuesday. They held signs and chanted slogans, including “My body, my choice” and “Repro rights are here to stay.”

Five speakers talked from a microphone during the hourlong protest, including Planned Parenthood leaders and the organizers with the Peace and Justice Action League of Spokane.

“This morning was hard, and we are tired, heartbroken and angry, but we aren’t giving up,” said Paul Dillon, vice president of public affairs for Planned Parenthood of Greater Washington and North Idaho. “Last night’s draft makes it clear that our deepest fears are coming true. Don’t let them gaslight you because you know the writing was on the wall for decades and this is the blueprint to overturn Roe.”

‘They will be welcome’: Inslee, Washington Democrats commit to ‘sanctuary’ for those needing abortions in other states

Inslee, joined by a number of other Democratic politicians in Kerry Park in Seattle, made clear on Tuesday the state will remain a safe place for those who need to access abortion. Washington will become a “sanctuary” for those who need it, he said. | Read more »

A draft Supreme Court opinion was published by Politico on Monday, although a final opinion isn’t expected until this summer. The draft has Justice Samuel Alito saying that nothing in the text of the Constitution supports a right to abortion, and that the authority to regulate abortion belonged to the states.

Dillon called it a crisis that will only get worse, citing an increase already in patients from abortion-restrictive states such as Idaho who have sought services in Spokane. He said people who are for abortion rights are ready for the fight.

“We’re smarter, fiercer and more strategic – because we’ve had to be,” he said. 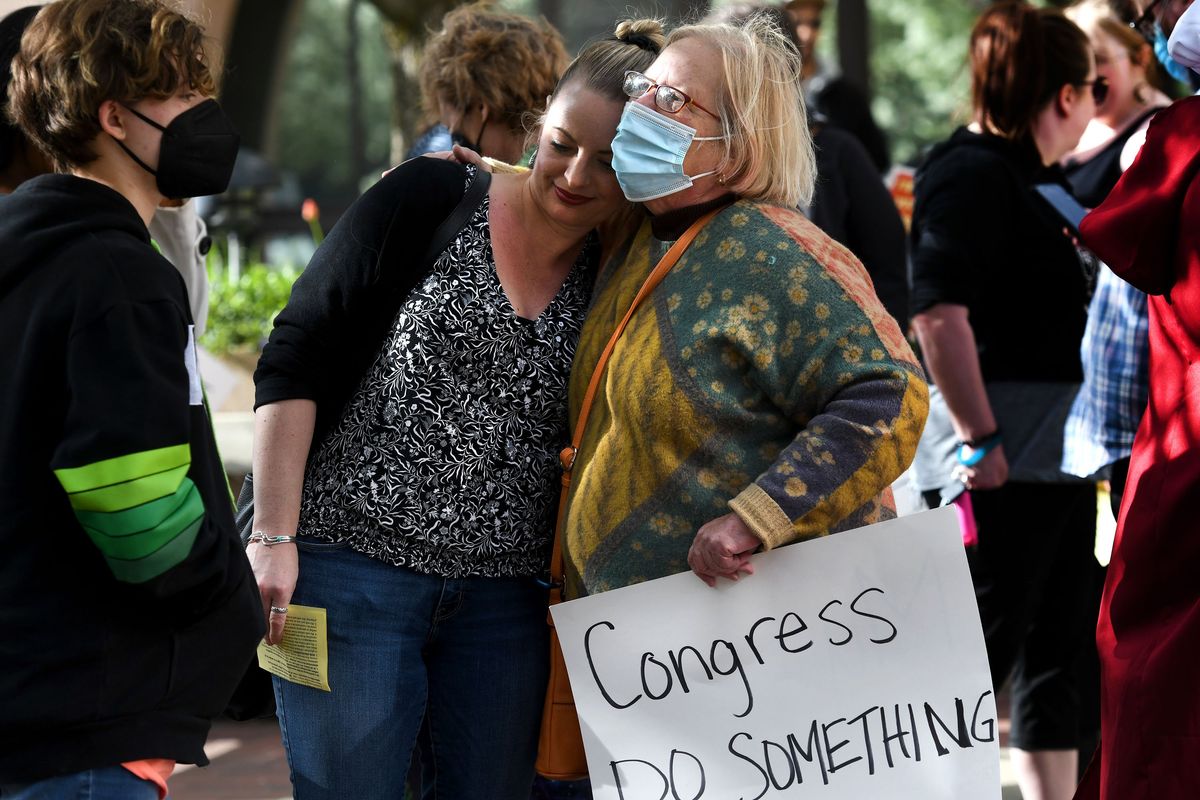 Aileen Luppert, left, gets a hug from her aunt, Eve Luppert, during the abortion rights rally Tuesday in front of the Thomas S. Foley U.S. Courthouse in Spokane. (kathy plonka)

Colleen Patrick, a Spokane resident, held a sign that urged people “to follow the money.” She argued that overturning Roe would do harm to “poorer women having babies.”

“I was just coming through the area and saw this going on so I stopped, because I believe strongly in abortion rights,” Patrick said. “When they start telling us you can’t have abortions but they don’t make child care affordable or raising a child, then you wonder, why are they doing this? … I think there are alternative motives to keep women oppressed and having babies, and fill that labor force of poor, uneducated people.”

“I became sick when I saw it, but it’s my feeling that if I don’t have full agency over my body, then I’m not treated like an equal human being,” she said. “Abortion rights are human rights.”

She’s the aunt of Aileen Luppert, who in 1992 as a Lewis and Clark High School student gave a pro-choice speech at the same site. Aileen Luppert was there with daughter, Evan Luppert.

“Actually, we weren’t sure about coming down because she wasn’t feeling well, but when I told her what’s going on, she told me, ‘That’s an injustice, we have to go.’ “

If a majority of justices finalize that draft opinion, it would quickly split the country into states with abortion access and those that outlaw it.

Some states are preparing for the potential that the high court could weaken or overturn Roe. But the leak of the draft opinion appeared to accelerate that drive, setting the country on course for a mixed landscape of abortion rights at the state level, before the court even issues its ruling.

“It does not represent a decision by the court or the final position of any member on the issues in the case,” the office said in a statement.

Leaks, abortion as a ‘fundamentally different’ issue than same-sex marriage and more: What does the Supreme Court draft opinion say about the future?

The leaked draft decision indicating the Supreme Court’s conservative majority’s position on abortion access has implications on issues tied legally to the landmark Roe v. Wade decision, including same-sex marriage and contraception. Those implications will likely not be clear until a final decision is rendered before the court recesses at the end of June, local legal and court experts said Tuesday. | Read more »

Jac Archer, with Peace and Justice Action League, urged the group to use anger, but no physical force, as action for change.