Sixty-five red dresses hung from the ceiling on Thursday, as part of the Kalispel Tribe of Indian’s commemoration of Missing or Murdered Indigenous Persons Awareness Day.

While some tribes may have opted to honor a broader community of murdered and missing Indigenous people, the Kalispel tribe focused on Native women.

“With this installation, the Kalispel tribe and Northern Quest Casino brings attention to our mission mothers, aunties, sisters, cousins, daughters and nieces in an effort to raise awareness for the violence of this epidemic,” said Nick Pierre, a Kalispel member.

According to a U.S. Department of Justice study, Indigenous women are 10 times more likely to be murdered than all other ethnic and gender groups in America.

The Kalispel tribe organized a comprehensive list that featured 60 Indigenous people who are missing. The list is vast, spanning from Janice Hannigan, who was reported missing in March 1971, to Dawson A. Poorbear, missing since April 13. The list also details which law agencies the report went to, the Seattle Police Department to the Yakima Community Service office.

There are reportedly 126 people missing within Washington who are not included on the list because those cases have not been investigated. Before the day of awareness, five more names were brought to the Kalispel tribe and did not make the list.

A moment of silence for 126 seconds was held to honor the missing people.

Above the list, nearly 60 red dresses of all sizes hung in a display. Indigenous Canadian artist Jaime Black created the first display in 2011 at the University of Winnipeg. This work of artistic activism has been adapted all over North America.

“Red is a powerful color that transcends the physical world and calls to our ancestors in the spiritual world,” Pierre said.

They pulled at heart strings, as if onlookers envisioned the vanished spirits missing inside the clothing. In the center of the dress display was a jingle dress, specifically designed for the MMIP day of awareness by Kalispel tribal member Stephanie Shoop. In the center of the velvet dress was a red handprint, the symbol usually painted across the mouths of MMIP supporters. Shoop used deer bone embellishments carved into the shape of elk teeth, which are a symbol of value of the girl or woman gifted the teeth. 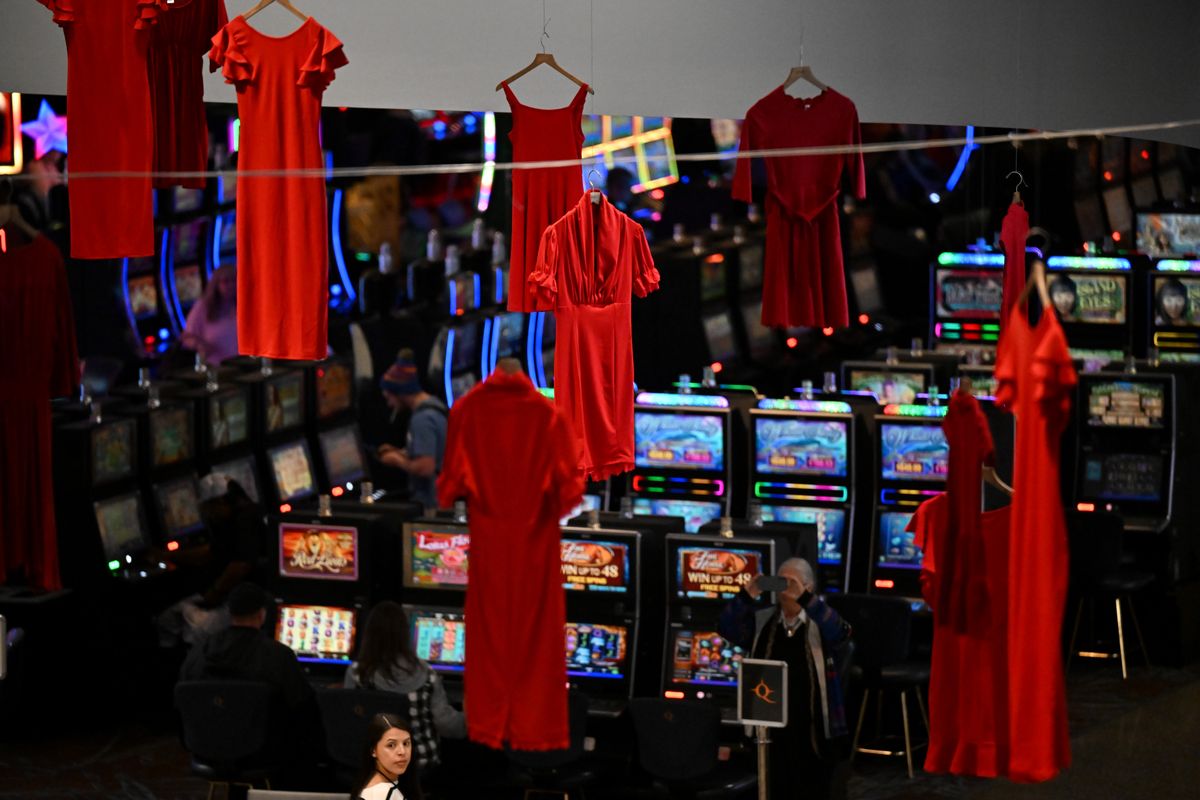 Red dresses symbolizing missing and murdered Indigenous women hang from the ceiling during a ceremony to bring awareness to the 60 Indigenous women missing in Washington State on Thursday, May 5, 2022, at Northern Quest Resort and Casino in Airway Heights, Wash. (Tyler Tjomsland/The Spokesman-Review)

“It was really important that we find dresses of all different sizes and shapes and styles and age ranges to reflect the diversity of the Indigenous women that are missing. We tried to be mindful of … the proportions of young children that are missing out of the Indigenous women population,” said Kalispel member Kyndra Gamache. “It’s hard to wrap your head around the 65 women who are missing, but you can’t not understand how big of a problem this is if you see all these dresses and how many there are. It’s a great way to give it realness instead of people think it’s some abstract number.”

Kurt Holmes, a Kalispel member also spoke to the ongoing crisis. Holmes’ daughter is expecting soon and, as his family prepares to welcome a new spirit, he recalled feelings of guilt and worry for his unborn grandchild.

“Part of that’s like … should I be hoping for a boy because they’re a little more safe?” Holmes said. “That’s the world we’re living in right now, and that’s not OK … this stuff is still going on, that’s what it’s saying, that Native women are less important and don’t mean as much. We have to bring awareness to this.”

Tribal elder Shirley Blackbear fought through tears in the event’s closing remarks, citing an appreciation for those who attended for Native women.

“These women that are lost, children, the aunts, the mothers, maybe even grandmothers – they are important part of our Native culture, they are our givers of life, they protect the home, the healers,” Blackbear said. “Each red dress represents what we truly believe … this is an important day for us all to remember who we come from and honor these ladies and children that are missing.”

After the event, Blackbear referred to her role in eldership as a generational responsibility, especially being close with survivors of violence against Indigenous women, which she called a “crisis.”

“Events like these are well received, needed and with the crowd that formed here, it was something that was appreciated,” she said.

Editor’s Note: An earlier version of this story stated that Kurt Holmes was expecting a child. However, it is his daughter who is expecting. The story has been updated with this correction.