With an average enrollment of 69 students, Wellpinit High School, located on the Spokane Tribe of Indians Reservation 40 miles northwest of Spokane, is one of the smallest in the state.

Despite the school’s size, it already boasts one of the finest basketball gyms in the 2B/1B classifications. In the fall, it will add that distinction to its football field.

The school, through a grant by the NFL Foundation Grassroots Program, will be installing a new turf field over the next few months with the hope of breaking it in for the upcoming fall football season. The school district was granted $250,000 from the program, with plans to match up to $750,000. 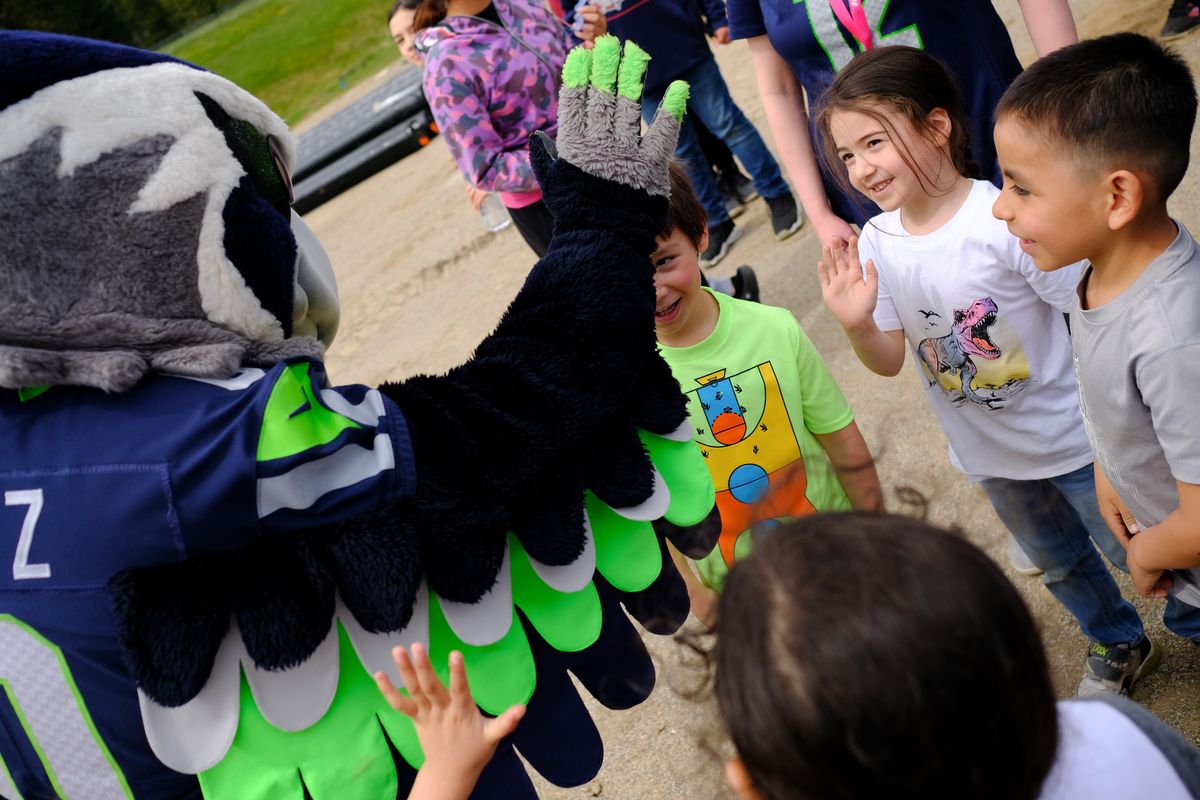 Kindergartner Grayson Wynecoop, right, in t-rex shirt, smiles before grabbing a high-five from Seahawks mascot Blitz after a groundbreaking ceremony for a new football field on Wednesday, May 4, 2022, at Wellpinit High School in Wellpinit, Wash. (Tyler Tjomsland/The Spokesman-Review)

“It’s going to be a great opportunity for our kids and our community,” Wellpinit athletic director Clark Pauls said after the groundbreaking ceremony on Wednesday.

“It was really surprising that we actually got the grant because of just of all the possibilities that we’re going to be able to use it for. The facility is going to be top-notch. I’m just excited and anxious to see what it really looks like when it’s all said and done.”

Pauls said it was happenstance he heard about the grant.

“I was just looking for (grants) for some new equipment – USA Football has a lot of those. I saw this and I immediately went to my business office manager and asked, ‘Hey, this is a grant I think we should go for,’ and she’s like, ‘Yeah, we can make it work.’ ”

Construction crews have already torn up the baseball outfield and scraped and leveled where the new football field will be installed. Pauls said construction and installation of the playing surface should be done by late June.

“The hope originally was for next year’s seniors to be able to get at least one game in next season,” Pauls said. “But as long as we don’t have too many weather delays, it looks like they’ll get the full season.”

He said other Northeast Washington schools are requesting to play on the turf field on Saturdays in the fall.

Once the playing surface is done, the second phase of the project will be to install a grandstand, and, Pauls hopes, lights in the next couple of years.

Two of the most prominent words uttered during the comments before and after the ceremony were pride and community.

“I’ve been here for 15 years and that’s probably the one thing that’s great about our community, is that we always come together regardless of what it is,” Pauls said. “Any type of fundraiser, our community will always come to bat for our kids, which is great.

“With it being such a small community, almost everybody is related in a way, and if they aren’t related they’re practically brothers and sisters because they’ve been around each other their entire lives.”

“It’s really good for the high school and the community and actually even for kids in lower grades,” said Greg Abrahamson, a councilman for the Spokane Tribe of Indians. “We have a lot of our youth participate in sports … and it keeps really growing so we’ll be able to hold those types of events here.”

Abrahamson said when he was growing up on the reservation, youth sports were held at the pow wow grounds.

“From the growth back in the ’70s to now is just astronomical for the community,” Abrahamson said. “Seeing things like this happen, we’re trying to do the best we can for our community and our children that are here in school now and those coming up.

“It’s going to be a source of pride for them growing up here with great sports facilities.”

The Grassroots program is a partnership between the NFL Foundation, which provides funding, and LISC (Local Initiatives Support Corporation), which provides technical assistance and manages the program.

The program distributed grants to 30 cities and towns in the past year totaling $6 million dollars.

“I think it’s just a special community here, and we’re so glad to be able to invest in the future of kids’ sports,” she said after the ceremony. “To be able to see all of the people come together – that part is really special to me.

“One of the things our organization is really proud of is our sports and rec program, and we do a lot of economic development and community development work. Sports and bringing people together and the aspect of team is a really important part of building a sense of community.”

Vlasaty emphasized the importance of bringing this type of opportunity to rural and Native communities.

“There are a lot of rural communities that are very underinvested,” she said. “And certainly our First Nations people have experienced that. We’re really happy to give back and be able to see this community excited about the project.”

Vlasaty said the Wellpinit field replacement is the only one of its kind in the state this year.

Paul Johns, former Seattle Seahawks receiver and the organization’s director of youth and high school programs, helped with the groundbreaking – along with Blitz, the Seahawks’ mascot.

“This means so much, because we’re all about community,” Johns said. “Not just for Western Washington, but for eastern and all of Washington. For LISC to be a part of this, and the NFL Foundation and the Seahawks to be a part of contributing to having a multipurpose field means the world to the Seattle Seahawks organization.”

Johns said the new playing surface will open up opportunities for youth and flag football, which hasn’t been possible in the past while trying to maintain a field for varsity use.

“We’re going to start talking about how we can bring an NFL flag (football) league here, so they can have their own flag league, just the beginning of some good things. It’s really nice to be here for the groundbreaking ceremony as they open up their new field.”

The Seahawks’ presence at the festivities was a welcome part of the program.

“I’m a big Seahawks fan, that makes it that much more cool,” Abrahamson said. “A lot of times you see them doing things on the west side of the state. For them to come over to the east side of state, representing the whole state of Washington, to be able to participate in this is really cool.”

The groundbreaking ceremony took place just as school let out for the day, with the entire student body and faculty gathered.

The festivities began with a tribal prayer and drum ceremony performed by a group of kindergartners. Abrahamson said the benefits of the new field will affect the current student body, the younger ones in attendance on Wednesday and generations to come.

“Not only is there pride, but kids grow up so quick,” he said. “In an instant they’re in smaller sports, then in bigger sports, then you’re out of school and you’re having your own children.

“It makes a big difference to have a good-quality field and quality equipment to be able to participate in sports.”