Inclement weather grounded SkyFest’s headlining act – the Thunderbirds – but about 25,000 people were still able to watch other planes dance in the sky, climb aboard massive aircraft on the ground and enjoy other family-friendly activities during SkyFest Saturday at Fairchild Air Force Base.

A U.S. Navy F-18 cruised close to Mach 1 speed (about 760 mph) above spectators, who applauded the aircraft’s speed and loud noise as it passed by. The jet made multiple passes over the spectators at different speeds and altitudes, performing rolls in the sky at times.

“There’s something about the F-18 jets coming by,” said Will Birrenkott, who added the passing jet shook him.

Birrenkott attended SkyFest with his wife, Sarah, and their two children – 8-year-old Colton and 6-year-old Waverly.

Colton Birrenkott said the jet was “very loud” while his sister said she “felt it on the ground.”

“It was shocking how you don’t hear it until it’s almost passed,” Sarah Birrenkott said.

She said the family, who live outside Airway Heights, hears planes all the time at Fairchild.

“We’re right underneath the flight path so we literally see them and hear them all day long and so it’s kind of fun to watch (at SkyFest),” Sarah Birrenkott said.

She said SkyFest, which they had never attended, was a fun, free event to do with their children.

“I think all of it’s been great,” she said. “It’s been fun to see the static displays for the kids and just everything.” 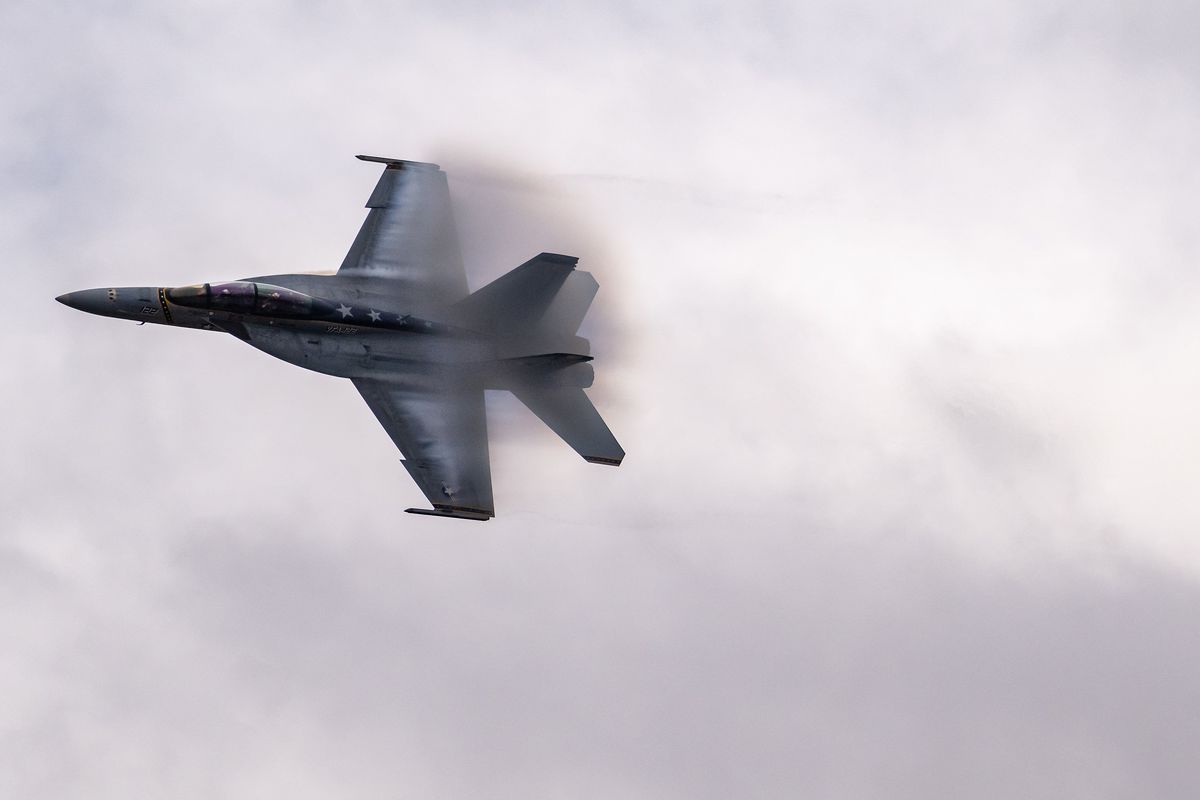 Many attendees, like Mike Johnson, hoped to see the U.S. Air Force Thunderbirds perform but Mother Nature had other ideas. The sky was cloudy and light rain fell at times Saturday.

One of the six F-16 Fighting Falcons, or Thunderbirds, took off prior to their performance to survey the airspace.

The conditions apparently were not favorable as Maj. Jake Impellizzeri of the Thunderbirds announced over the speakers that the popular air demonstration squadron would not perform. A collective groan from the crowd could be heard after the announcement.

Mike Johnson said he and his wife drove from Kettle Falls mainly to observe the Thunderbirds in action.

“It’s OK,” Johnson said. “We got to see the F-18 flying around so that was worth it.”Patrick and Courtney Carbaugh took their children to the airshow after Patrick Carbaugh flew in a Thunderbird with Impellizzeri Friday at Fairchild. The Thunderbirds nominated Patrick Carbaugh, a former U.S. Marine and current Airway Heights police officer, for its Hometown Hero flight.

“We came back today because the kids wanted to see the full aerial show,” Courtney Carbaugh said.

The family would have appreciated seeing the Thunderbirds perform but the decision to cancel made sense, she said. Plus, their children were excited to explore inside the aircraft on the ground.

Patrick Carbaugh said he was looking forward to seeing the Thunderbirds’ aerial maneuvers from the ground as opposed to in the air like he did Friday. There was so much happening during his flight – like focusing on breathing techniques to avoid fainting – that he did not get to fully appreciate the experience, Carbaugh said.

“That was kind of missed, so coming out here and getting to watch them would have been really cool,” he said.

The National Weather Service is calling for a mostly cloudy Sunday with a high temperature of 70. There is a slight chance of rain between 4 and 5 p.m.