The bridge bearing the name of Bloomsday’s originator and an early champion of the Centennial Trail will on Monday join the list of structures over the Spokane River being rebuilt.

The Don Kardong Bridge has long been in need of repair, trail and park officials said, and will close while Garco Construction performs a $3.2 million renovation of the structure. The bridge, originally constructed to carry Great Northern Railway cars over the Spokane River near Gonzaga University in the 1920s, is “a vital connection” along the roughly 40 miles of trail connecting Spokane and Coeur d’Alene, said Loreen McFaul, executive director of the Friends of Centennial Trail group.

“It’s beyond time to repair the bridge,” McFaul said.

The bulk of the money for the renovation is coming from federal dollars appropriated by Congress as part of the American Rescue Plan, the third round of stimulus spending intended to address the COVID-19 pandemic and ensuing recession. The Spokane City Council set aside $2.2 million in COVID-19 stimulus funding for the bridge project in April, increasing the initial outlay of COVID-19 stimulus dollars due to rising material costs. The Friends of Centennial group, as well as Gonzaga University, the Lilac Bloomsday Association and the University District Public Development Authority, also contributed funds to the project. The bridge will also be funded by a $726,000 grant from the Washington Wildlife & Recreation Coalition.

Spokane Parks Director Garrett Jones said collaboration with other groups ensures there will be community ownership of the bridge, and the relationships could offer other opportunities with Parks in the future.

“I think the perfect storm happened, with all these opportunities,” Jones said. 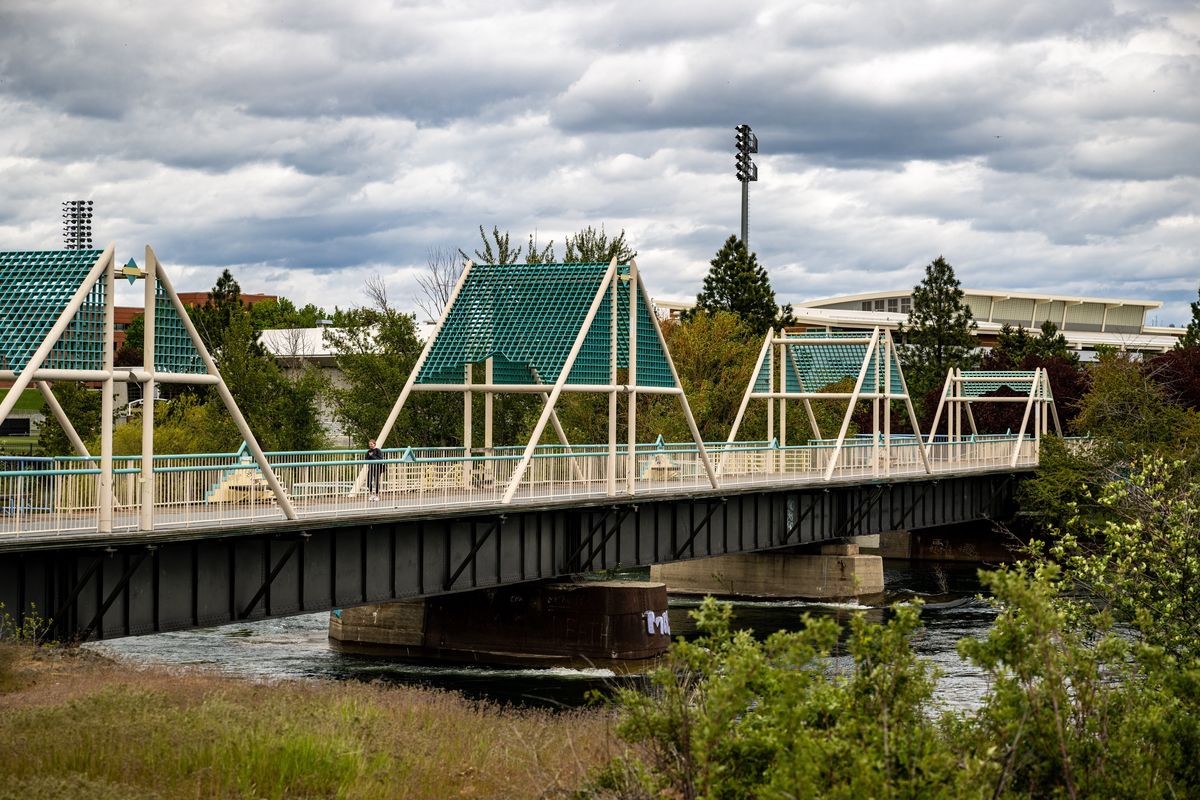 The Don Kardong Bridge near Gonzaga University will close Monday as crews begin a $3.2 million replacement project funded in part by COVID-19 stimulus money. A detour will take the roughly 160,000 pedestrians who traverse the bridge every year south to Spokane Falls Boulevard and through Gonzaga’s campus to stay on the Centennial Trail. (COLIN MULVANY/THE SPOKESMAN-REVI)

Abandoned during the rerouting of trains around downtown that occurred in the run-up to Expo ’74, the bridge was reopened with new decking and paint, and renamed for Kardong in summer 1988. A year later, the first shovels hit earth in the shadow of the bridge’s aqua-green trusses for construction of the Centennial Trail. But the decking had begun to rot, and safety concerns forced closure of the observation platforms extending down to the water line.

In the intervening years, a metal grate had been placed over wood on the east edge of the bridge that would freeze and get slippery in the winter, or warm to scalding temperatures in the summer, Jones said.

“We’re really stripping it down to that original railroad crossing, which is still in really good shape,” Jones said.

The new bridge will have a concrete deck, which will make maintenance easier and provide a better surface for walkers, joggers, cyclists and more during the winter months, McFaul said.

“We see our street intersections moving to concrete, and this bridge should follow suit,” she said.

The plan includes removal of the trusses, which are not structural, installation of improved lighting and guardrails as well as accessibility enhancements.

The new bridge will also pay homage to the medallions that were installed in the Centennial Trail’s pavement, known as the “Miracle Mile Medallions” sold in initial fundraising for the project more than 30 years ago. The designs will be included in the engraving of the railing for the repaired bridge, McFaul said, preventing the vandalism that had forced park officials to remove and safely store them in recent years.

The city’s Parks Department anticipates the bridge closing May 27, with completion of the project slated for April . In the interim, bridge users will be directed to a detour that will route south of the bridge site to Spokane Falls Boulevard, near the junction with the Ben Burr Trail. Pedestrians will be able to use that bridge to cross the river, then make their way back to the Centennial Trail along North Cincinnati Street on Gonzaga’s campus. River access will be closed at the bridge during construction.

The Don Kardong Bridge is the latest in a series of spans over the Spokane River that have been closed during reconstruction. The East Trent Avenue Bridge has been closed since June 2020 for a $25 million replacement project by the Washington Department of Transportation. The Post Street Bridge near downtown is also in the middle of an $18.6 million replacement project, expected to be complete next winter. The Parks Department has also closed the second suspension bridge in Riverfront Park ahead of a planned rehabilitation project.

Rerouting some Parks Department funding to make up the additional materials and labor cost will delay some projects in other areas of the city, Jones said. That includes irrigation improvements in Coeur d’Alene Park, some playground equipment in Wild Horse and Liberty parks, and a path for students to get to school through Franklin Park. Those projects will be deferred, but eventually funded by the department, he said.

McFaul said when the Don Kardong Bridge is rebuilt, it’ll be a more fitting tribute to its namesake

“This bridge needs to be worthy of him, and it will be soon,” she said.