A GRIP ON SPORTS • We have finished our journey. It’s been a long one. But now we can reveal why the Mariners have struggled so much the past two decades. It is a devilish plot, that’s for sure.

• Act Three, Scene One: A Sunday evening, early-August. Heat radiates around Steve Hardy’s front porch. He dozes in his chair, as Dave Niehaus’ voice describes the final run of an eight-spot in the third inning. The sound of Julie, his wife, playing her violin wafts through the open window. Life is good. And then Steve remembers. He awakes with a start. That man is standing on his porch, suit pressed, Indians’ hat atop his head.

“No, it isn’t,” Steve says, his voice cracking a bit. “I’ve go all of August, September, the World Series in October. Lots of time.” “That’s what everyone says,” the man chuckles. “But it all ends for you Sept. 30. Did you not read the fine print as I asked?”

“You took the contract,” Steve says. “How could I?”

A crack of thunder distracts Steve for a second and, when he looks at the man once more, he is holding the contract. The one Steve signed back in spring training. He hands it to Steve, who starts to read. Finally, he gets to the fine print. After 12 seconds, he drops the contract. His hands are shaking.

“The M’s don’t win the Series,” he asks, incredulously. “No, Mr. Hardy,” the man answers calmly. “You wanted them to win more games than anyone. That’s what you will get. They will win 117 games – in the regular season.”

“What are you two talking about,” comes a voice from the front door. It is Julie, holding her violin in one hand, the bow in the other and her eyes darting back and forth between her husband and the small man.

The man looks at her. Sees the violin. Makes a small noise and steps back, almost falling off the porch. “Is that a fiddle?” he asks. “I hate fiddles.”

“Yes, yes it is,” Julie says, noticing the man’s discomfort. “And I know who you are. I wondered why Steve has been sleeping so poorly. Now I know. You aren’t getting him Beelzebub.”

Steve stares. The man, sweating a bit, seemed disconcerted. Then slowly smiles. “There is nothing you can do about it,” he finally says.

“Oh, yes there is,” Julie answers. “My maiden name is Webster and I know all about you and your contracts. There is a mistake in there somewhere. Always is. But instead of wasting time finding it, let’s make a deal.”

“What type of deal,” the man answers, still looking at the violin.

“Steve keeps his soul. You leave. That’s the deal.”

Julie hesitates. “After this season, they don’t make the playoffs for another 10 years,” she says. The man takes off his Indians’ hat, revealing, for the first time, two small horns. He scratches them. “Twenty-five years,” he responds. 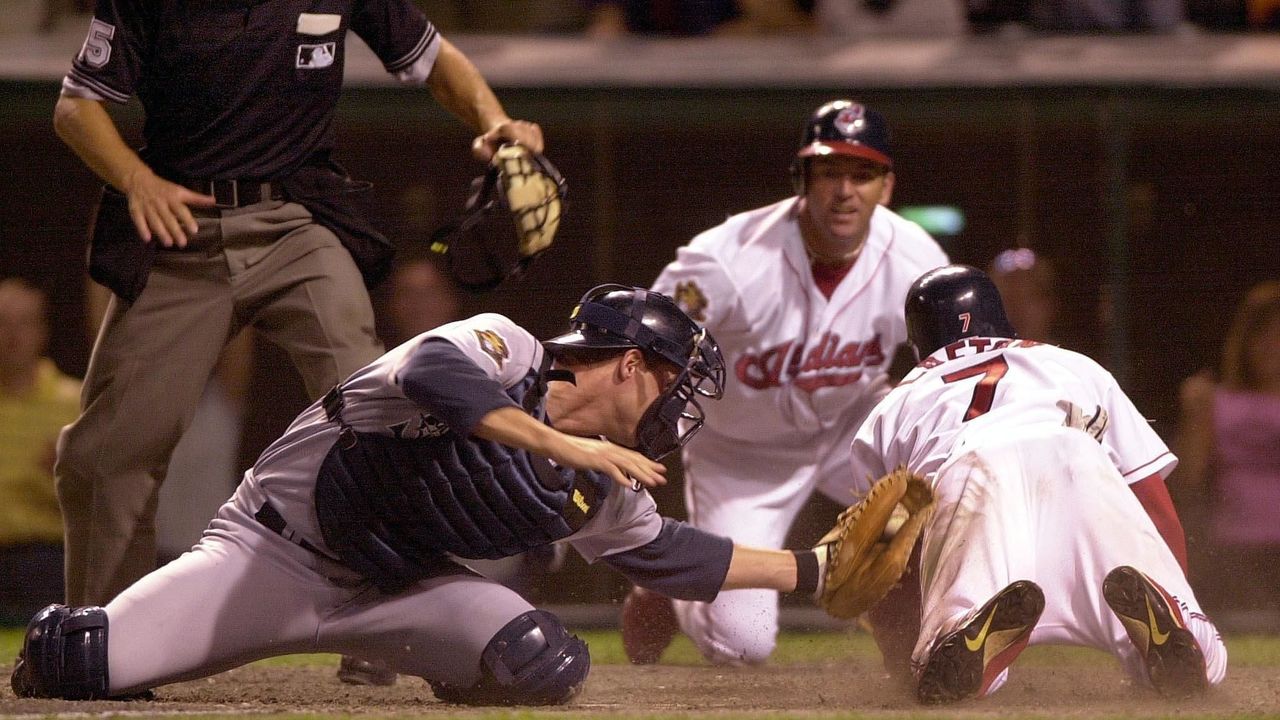 Steve gasps. “No, that’s not right. …” His voice trails off.

Within seconds they shake hands, the man has gathered the contract and has disappeared in a puff of smoke. Steve stands on the porch, crying. Julie consoles him. Dave Niehaus is yelling something about Kenny Lofton scoring and the M’s losing, 15-14. No one notices.

• And that, my friends, is why we have to go through all this crud with the Mariners every year and will for at least a few more. 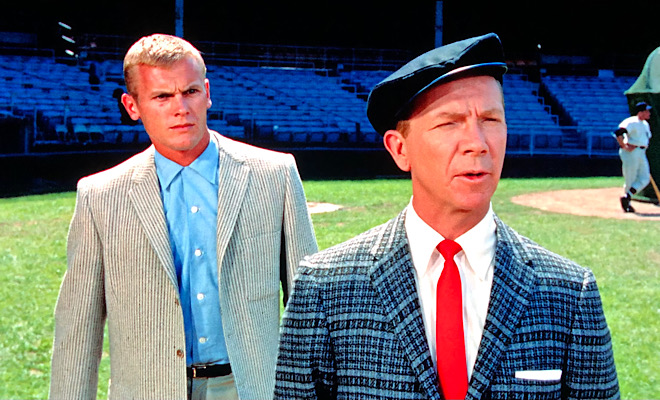 We spent some time looking for Mr. Hardy – not his real name – over the past couple years but he seems to have left Spokane. Hopefully, wherever he is, he’s happy. And he and Julie are still together.

The little man who showed up on his porch that March day in 2001? We found him. Talked with him in early March this year. He cheated Steve and all of us, you know. The M’s were supposed to win 117 games that year. Set the record by themselves. But the little man didn’t like being bested by Julie, so he allowed the Indians to rally from a 12-0 deficit Aug. 5. That one game cost the Mariners the win record.

You can look it up.

As for the postseason, we tried to make some sort of deal to get them in this year. Offered to ghost-write his autobiography. Buy him a new Astros’ hat (his was looking a bit ratty). But he’s done making deals around here. He doesn’t see the need. As he said that day, everything is going his way anyhow. And, yes, his laugh is still pretty damn chilling. 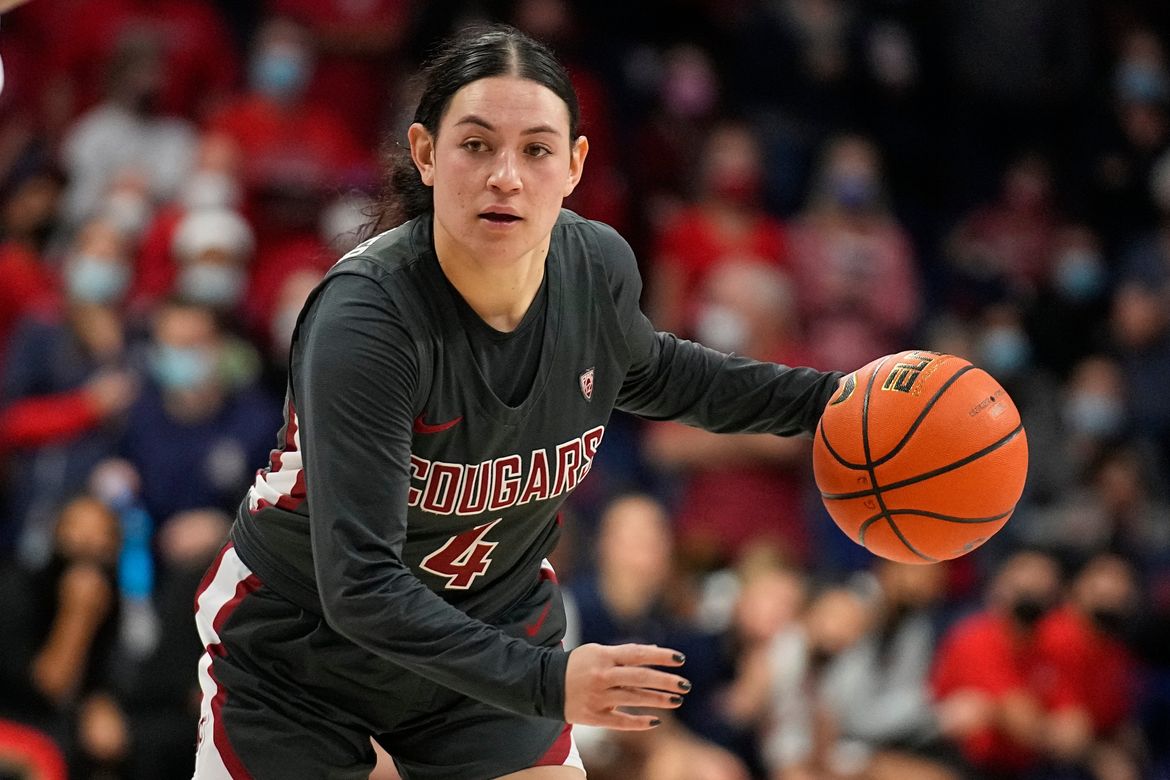 WSU: The news yesterday from Pullman via San Francisco seems a little odd. Tyrell Roberts, who moved from UC San Diego to the Cougars last basketball season, has moved back to California. He’ll play at USF this winter. Colton Clark has the story. And why do we think it’s a little weird? If Roberts had stayed, the Cougars would seem to have a better shot at an NCAA berth than the Dons. Then again, no snow in San Francisco. … Krystal Leger-Walker is headed home to play professionally. Colton tells us she has signed a contract with a New Zealand team. … Elsewhere in the Pac-12 and college sports, Jon Wilner may have figured out how much the Pac-12 Networks are worth. … Oregon picked up a win in court, not on the court. … The Ducks’ baseball team did lose in the Pac-12 tournament’s first round, 8-6 to Arizona. … Oregon State won, defeating Washington 13-8. … California upset UCLA 4-1 in the late game (it started after 10 p.m.). … Top-seeded Stanford topped Arizona State 6-3. … Oregon and Arizona State face off in an elimination game today, as do Washington and UCLA. Oregon State faces California while Stanford and Arizona meet in the winners’ bracket. … Stanford won the Pac-12’s 200th women’s NCAA title yesterday, defeating Oregon 3-2 in the golf finals. … Five Pac-12 schools, including Oregon State and Arizona, will compete in softball’s Super Regionals this weekend. … In basketball, Arizona has picked up another international recruit. … The UCLA player who was cited for spiting at fans after the Arizona game has been sentenced. 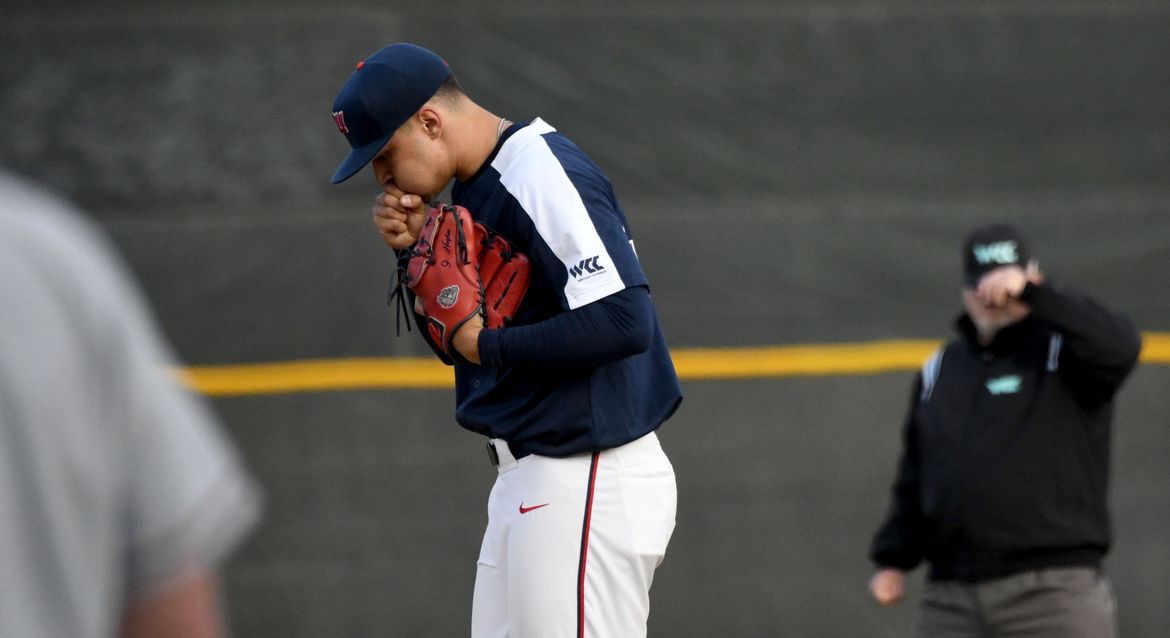 Gonzaga: Before we get to the sports competing now, we want to call your attention to this story about Braden Huff, the Zags only incoming high school recruit this season. … Now to baseball. The Bulldogs begin the WCC tournament today in Stockton, Calif., facing Loyola Marymount. Justin Reed has a preview. The Lions held off BYU to move on. The Zags had a bye. … Around the WCC, San Diego rallied past USF 10-5 to advance to the double-elimination round of the tournament. 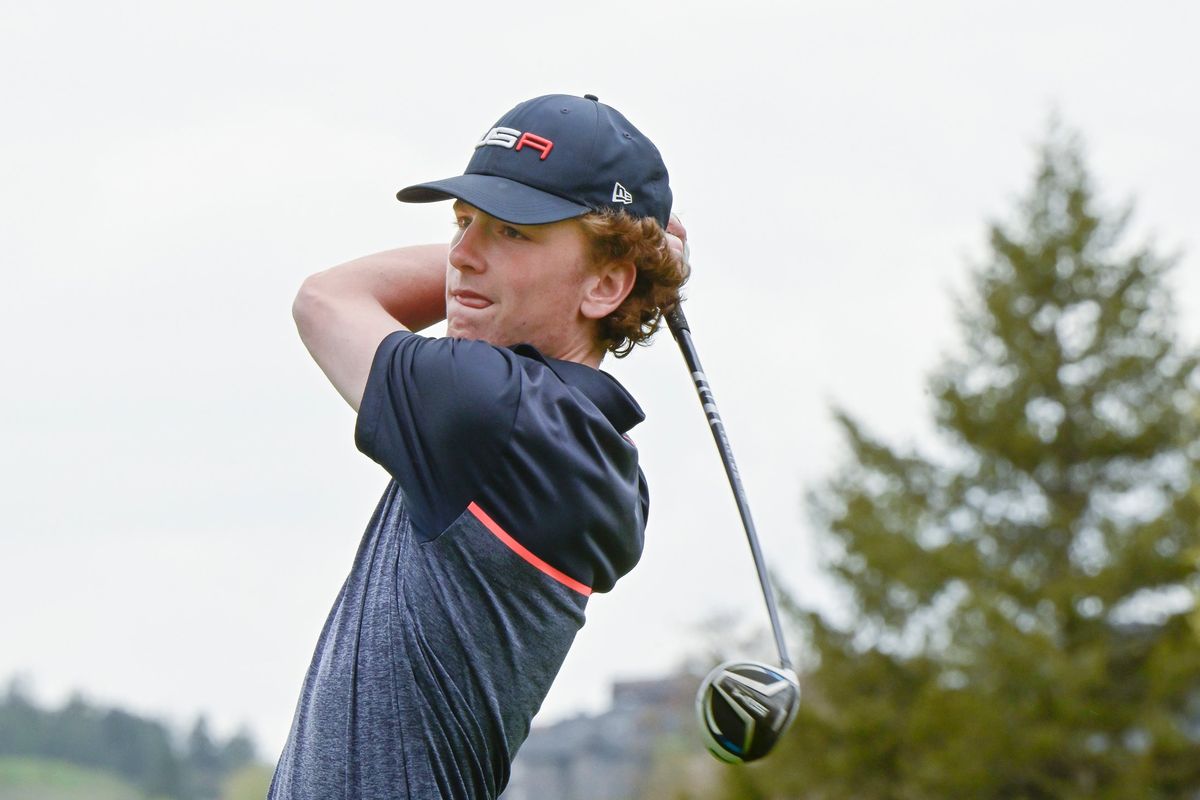 Preps: The State events are going on in Washington, with golf leading the way. Jim Meehan has this roundup of all the tournaments that finished yesterday. … State track is this weekend. Keenan Gray has a preview. … Justin returns with a look at girls tennis and the return to prominence of Gonzaga Prep.

Indians: Spokane is on a roll. The Indians won again Wednesday night, topping Everett 6-5. They have won seven of eight games. Dave Nichols has the coverage. 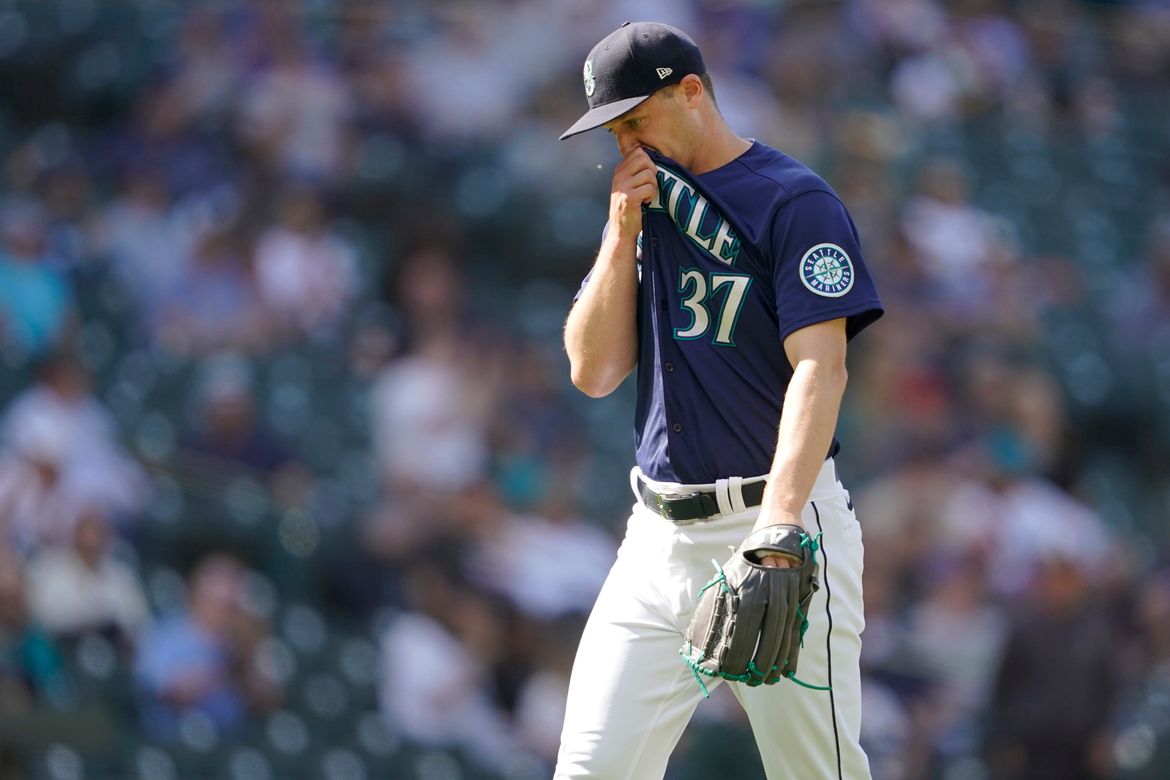 Mariners: If you thought the season of hope couldn’t get any worse, you were wrong. The M’s are now in last place in the American League West after a 4-2 home loss to the A’s. Oakland is tanking and still is doing better than Seattle. Let that sink in. … The M’s are no longer maddening. They are depressing.

Seahawks: For Seattle to be successful, a couple of recent top drafts picks, receiver Dee Eskridge (2021) and defensive end L.J. Collier (2019), need to do well.

Storm: The team is moving closer to a new practice facility.

• We have lamented our cold spring weather for a while now. It is supposed to leave us. For a few hours at least. A 70-plus-degree high is in the offing. And then it is supposed to rain and cool down. Great. Until later …