NATIONAL HARBOR, Md. – On Tuesday, 234 of the nation’s best spellers descended on this suburb of Washington, D.C., to kick off three days of tough competition that will crown the next Scripps National Spelling Bee champion.

Making it to Wednesday’s quarterfinals was no small feat, as nearly two-thirds of the contestants were eliminated in the three-question preliminary rounds. But Pullman’s Navtaj Singh correctly spelled “lemniscus” and “ergate,” and identified the meaning of “palazzo” to advance.

Singh, 11, won a regional spelling bee in Lewiston in March to earn a spot in the national championship. After a successful first day of the Bee, he had one word to describe how he felt: “Grateful.”

Emmie Rakes of Coeur d’Alene, 14, was tripped up by “gaillardia” and didn’t advance on Tuesday, but she was already looking forward to the rest of her time in the nation’s capital, including a trip to Planet Word – a museum of language in downtown Washington – and catching a Washington Spirit soccer match on Wednesday with her parents, Mark and Lisa Rakes.

“I’ve always just been a big reader, so words are just natural,” Rakes said. “It’s just something where I thought, ‘Why not?’ So I’m feeling OK. I just want to keep going and do the next thing.” 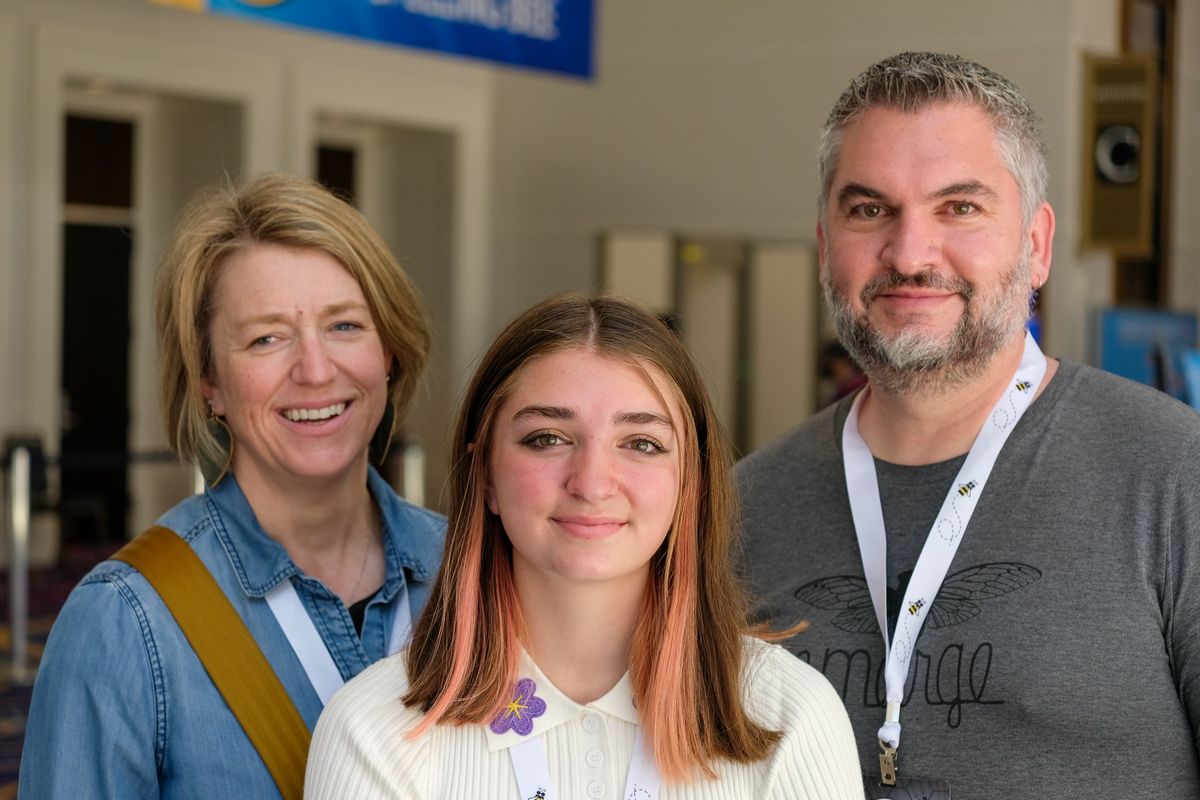 Emerson “Emmie” Rakes of Coeur d’Alene (front), with her parents, Lisa and Mark Rakes, after she competed at the Scripps National Spelling Bee in National Harbor, Md., on May 31, 2022. (Orion Donovan-Smith, The Spokesman-Review)

In its 94th year, the storied competition returned to near-normal after the COVID-19 pandemic forced its cancelation in 2020 and a scaled-back contest in 2021. After the 2019 Bee ended in a historic eight-way tie, a testament to how many contestants have mastered techniques to spell even words they have never seen before, organizers introduced a new component that requires spellers to choose one of three options to identify a word’s meaning.

That “word meaning” round tests a speller’s vocabulary in a way simply spelling a word doesn’t, and 28 contestants were eliminated by the new challenge Tuesday after correctly spelling their first words.

“I thought I was going to get out on vocabulary,” Singh said, adding that he was more comfortable with the spelling rounds after thoroughly studying lists of words that could come up in the competition.

Rakes, who said she had already devoured 22 books in just the first half of 2022, said she was looking forward to the vocabulary round.

“I think I would do very well in that round,” Rakes said. “It’s harder to study for that, because you have to read a lot more things.”

She hoped studying Italian and Spanish would help her with the spelling rounds, but the French-derived word “gaillardia” – a flower whose pronunciation belies its spelling – stumped her.

Words in the first spelling round and vocabulary round were chosen randomly from a list of 4,000 words, known as “Words of the Champions,” compiled by Bee organizers. In the more challenging third round, contestants had to spell one of the roughly 470,000 entries in Merriam-Webster’s Unabridged Dictionary.

Singh said he was inspired to compete in the Bee by his older sister Gurveena, a former competitive speller, and spent hours upon hours studying word lists and training with a spelling coach.

“I looked at languages like Latin and Greek, and I looked at the patterns of how they spell different sounds,” he said.

While he planned to brush up on the word lists ahead of Wednesday’s quarterfinal round, Singh said he was also looking forward to biking around D.C. with his sister and their parents, Gurvinder and Nav.

Several other spellers from the Northwest advanced on Tuesday.

Ava Anderson of Nyssa, 11, advanced after correctly spelling “cataclysm.” Sirjana Kaur of Seattle, 14, spelled “radiolarian” to earn a spot in the quarterfinals.

Saharsh and Deetya Vuppala, 13-year-old twins from Seattle, made it through all three rounds after spelling “deanery” and “ophic,” respectively.

Dahlia Cunningham of Portland, 10, secured a place in the next round after spelling “commensal.” Jia Xi Lu of Boise, 10, was tripped up by “caisson” but will have a shot to come back next year.