• If you haven’t had a chance to watch Leach fold up a chair (or two), so to speak, then find the video. It is just so Leach-like. Iconoclast doesn’t begin to describe the former Wazzu coach, does it? 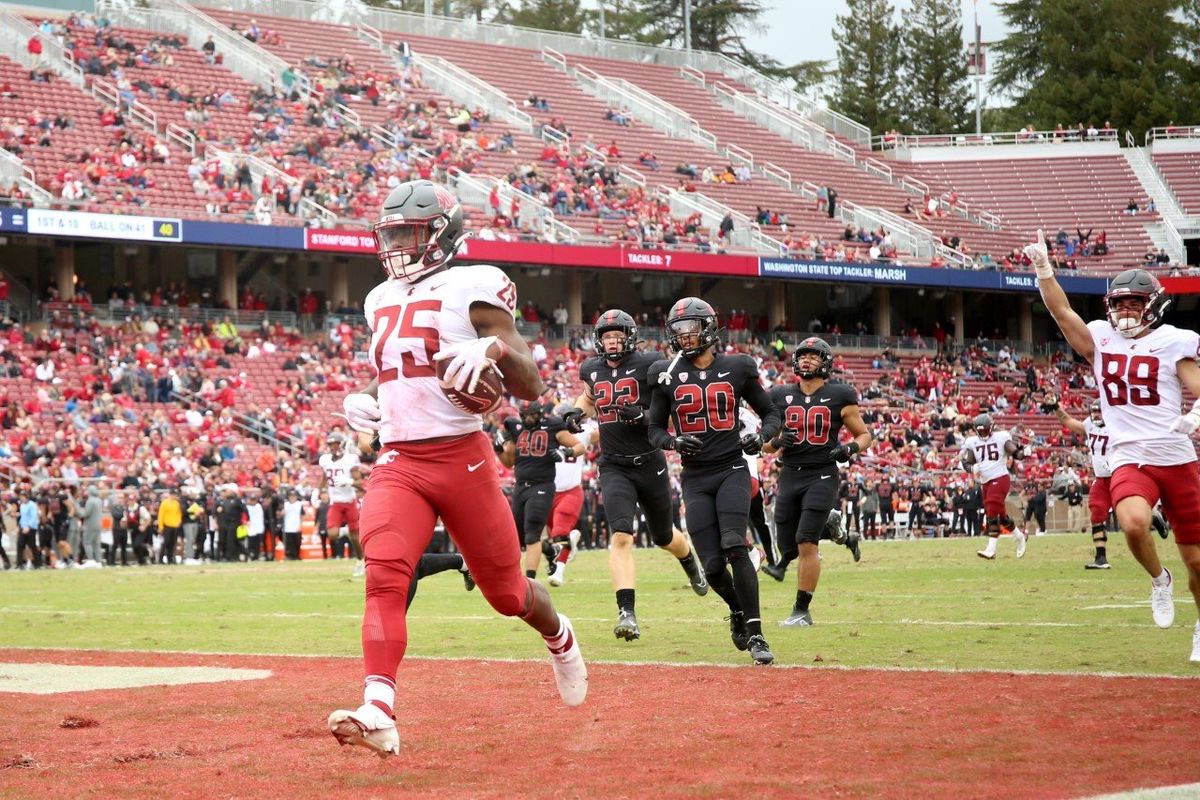 His old team, however, continued a streak he began. The Cougars won once more over Stanford, the sixth consecutive time that’s happened, which happens to be just two from the all-time series streak. But how the Cougs won is what was so odd.

They ran over the once physically dominant Cardinal. Backed up and ran over them some more. Then did it again. Thirty-eight times. For 306 yards, which includes 10 lost taking three knees at the end (thanks shotgun).

The 52-14 victory not only was Washington State’s biggest domination of Stanford ever, it also marked the end of the myth around David Shaw’s tenure at with the Cardinal. Nope, he’s not such a miracle worker he can make something out of nothing.

Despite Stanford having a quarterback who pro scouts drool over, the Cardinal, like everyone else, are only as good as the guys up front. And, for one game at least, the Cougars were better up front. On both sides of the ball.

Which means their offensive line played well. Better than it has all year, the main reason why the offense played better than it has all year. There were holes for a healthy Nakia Watson (and everyone else). There was time for Cameron Ward. Heck, if not for a case of drops – we counted at least five by the banged-up receiving corps – the Cougars may have had 600 yards of total offense. As it was they finished with 514.

The much-needed win not only snapped a three-game losing streak, it also moved the Cougs within a game of bowl eligibility. It won’t be easy getting there, however.

A much-improved Arizona State comes to Pullman next Saturday. Then there is a trip to Arizona and a much-anticipated reunion with Jayden de Laura. Finally, there is the Apple Cup, a rivalry in which the stakes are always high but were taken up a notch thanks to de Laura’s postgame antics last season.

If the Cougars’ offensive front plays like it did yesterday, however, anything is possible. Even a sweep. 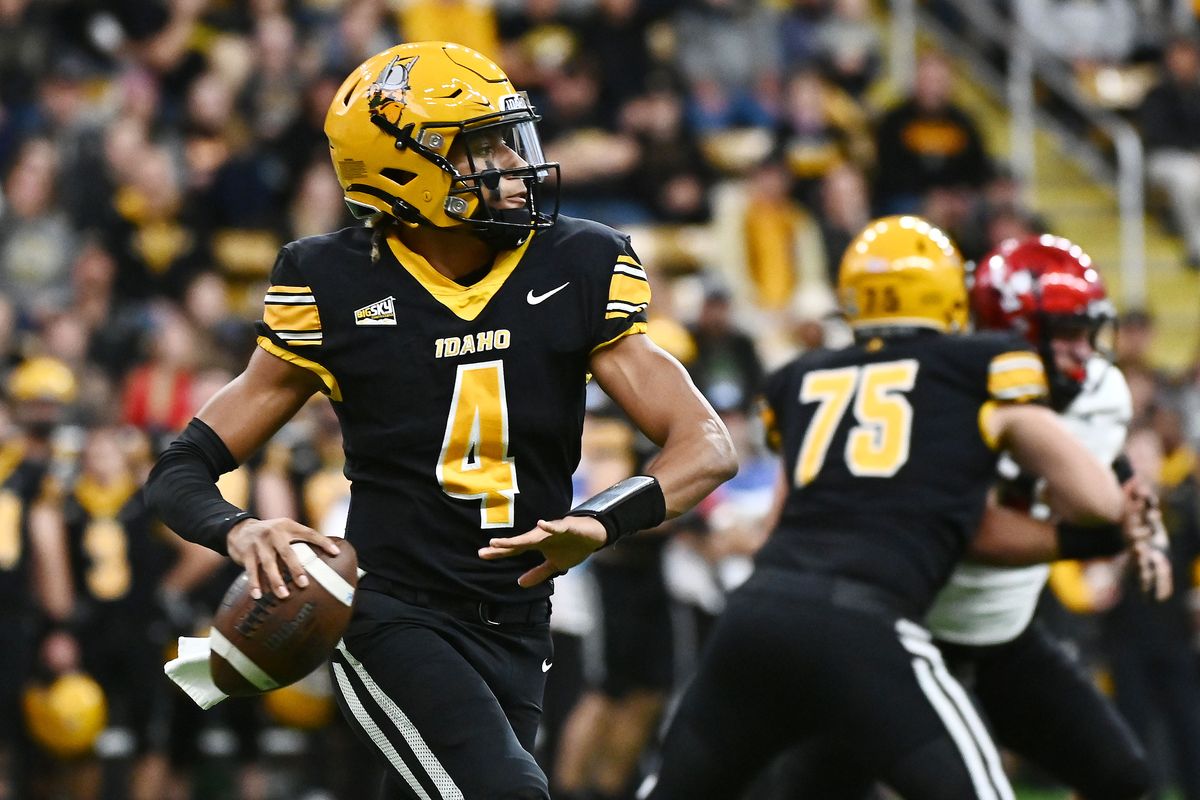 • When Eastern Washington was exceptional, the Eagles had a well-rounded offense and a solid defense. Sounds like the way the University of Idaho plays this season, doesn’t it?

The Vandals showed Eastern what most everyone in the Big Sky Conference has learned, that Jason Eck has negotiated one of the most-impressive one-year turnarounds in school history.

The 48-16 UI victory lifted Eck’s first Vandal squad to 6-3 overall, which is a fine record, especially considering the train wreck that was 2021 (4-7, including a 71-21 loss at Eastern). But if you dig deeper into this year’s mark you realize the three losses are to FBS Washington State, FBS Indiana and to the FCS’ second-ranked team, Sacramento State, all on the road.

To put it simply: The Vandals are for real. Find a way to get past suddenly hot UC Davis (5-4 overall, 4-2 in the Big Sky) next week and UI goes into the regular-season finale at woeful Idaho State (1-8, 1-5) as possibly the second-best team in the FCS’ best conference. That’s a turnaround for the ages. 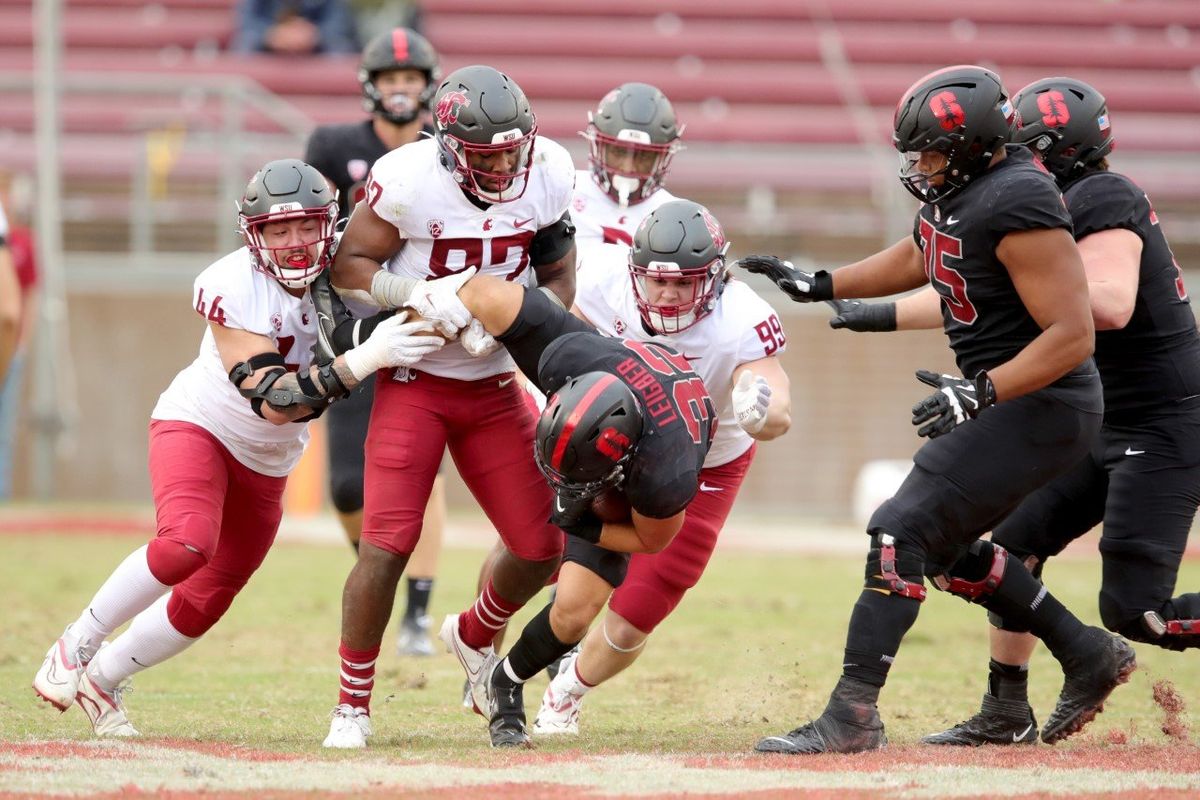 WSU: Maybe sports editor Ralph Walter had an inkling of just how dominant the Cougars would be. Not only is there the usual coverage, there is also some bonus items. Colton Clark supplied the usual, the game story, the difference makers and a couple of pre- or during-game stories. The former was on Watson’s return, the latter on an injury to Jarrett Kingston. … The folks in the office had the always fun-to-read recap with highlights. … After missing a couple games, we watched from home and put together our TV Take. … The surprise? Jacob Thorpe has a column on the Cougs’ emerging running game. … The Cardinal were gracious hosts, coming through with a slew of fumbles. … Elsewhere in the Pac-12 and college football, Jon Wilner has his usual Saturday Night Five column in the Mercury News. We can also pass along his mailbag, which we missed yesterday. … There were not a lot of big games, mainly because the Big Four were playing some of the also-rans. However, USC allowed California to hang around and make a game of it in the Coliseum at the end. The still shorthanded Trojans won 41-35. … UCLA built a big lead in Tempe but Arizona State rallied before losing 50-36. The Bruins were missing a weapon or two. … Utah had no trouble with visiting Arizona, which didn’t handle the miserable weather well. The Utes were able to play some backups a lot. … Oregon toyed with host Colorado, throwing the ball around and posting a 49-10 victory. The Buffs are not only bad, they are beat-up. The Ducks didn’t look ahead to next week’s game with Washington. … The Huskies put away Oregon State on Friday with a superb late drive. … In basketball news, Washington expects improvement this year with its men and women. … Oregon’s men are dealing with injuries.

Gonzaga: Around the WCC, USF’s men expect to have another great season despite another coaching change. 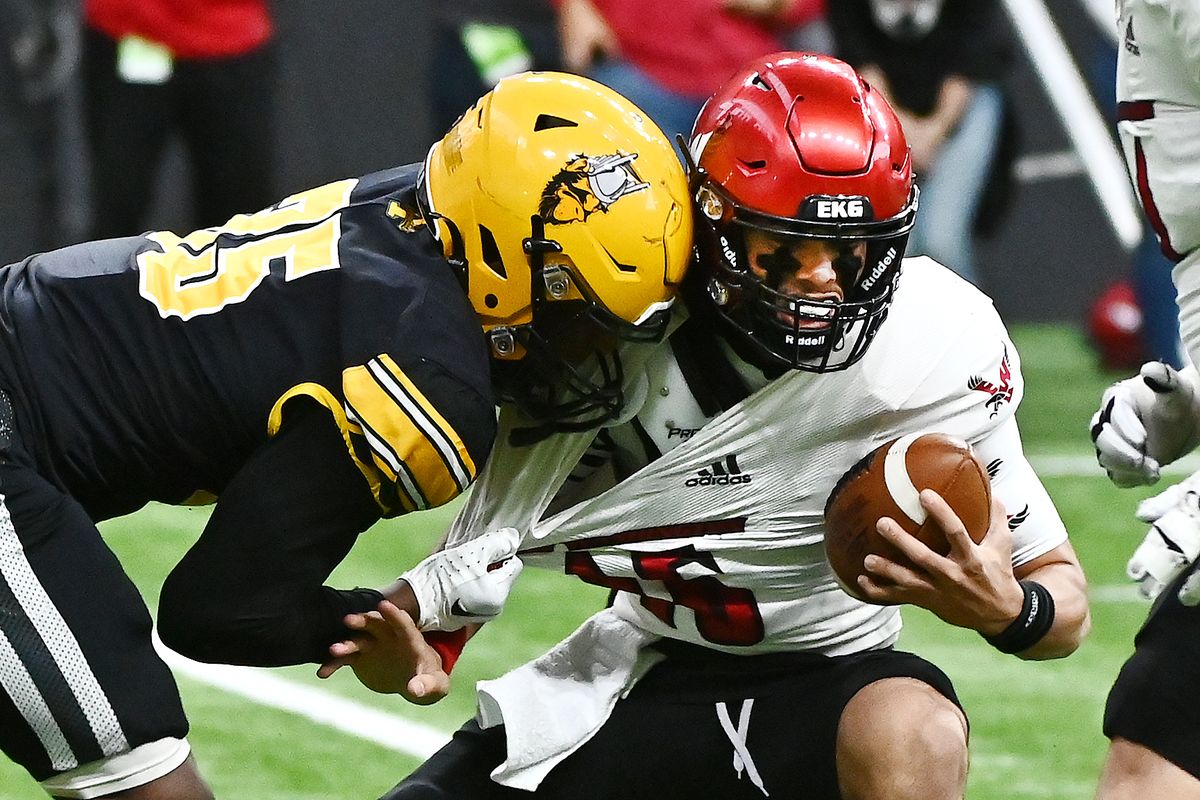 Idaho and EWU: The Vandals won, so we lead off the coverage with Peter Harriman’s game story out of Moscow. … We follow up with Peter’s story on John L. Smith’s induction into the school’s athletic Hall of Fame. … Dan Thompson has a column on the Eagles and where they stand. … Elsewhere in the Big Sky, Weber State once again helped a highly ranked opponent, this time Sacramento State, too often, leading to a 33-30 home defeat. … Montana State stayed tied for the top spot in the standings, edging host Northern Arizona on a last-second field goal. … It was snowing in Missoula and Montana plowed its way through woeful Cal Poly. … Idaho State isn’t very good either, losing 43-3 to visiting UC Davis. … Portland State is at least middling as it won at Northern Colorado 35-21.

Whitworth: The Pirates ran over Pacific 28-17 on the road, ensuring another winning season. 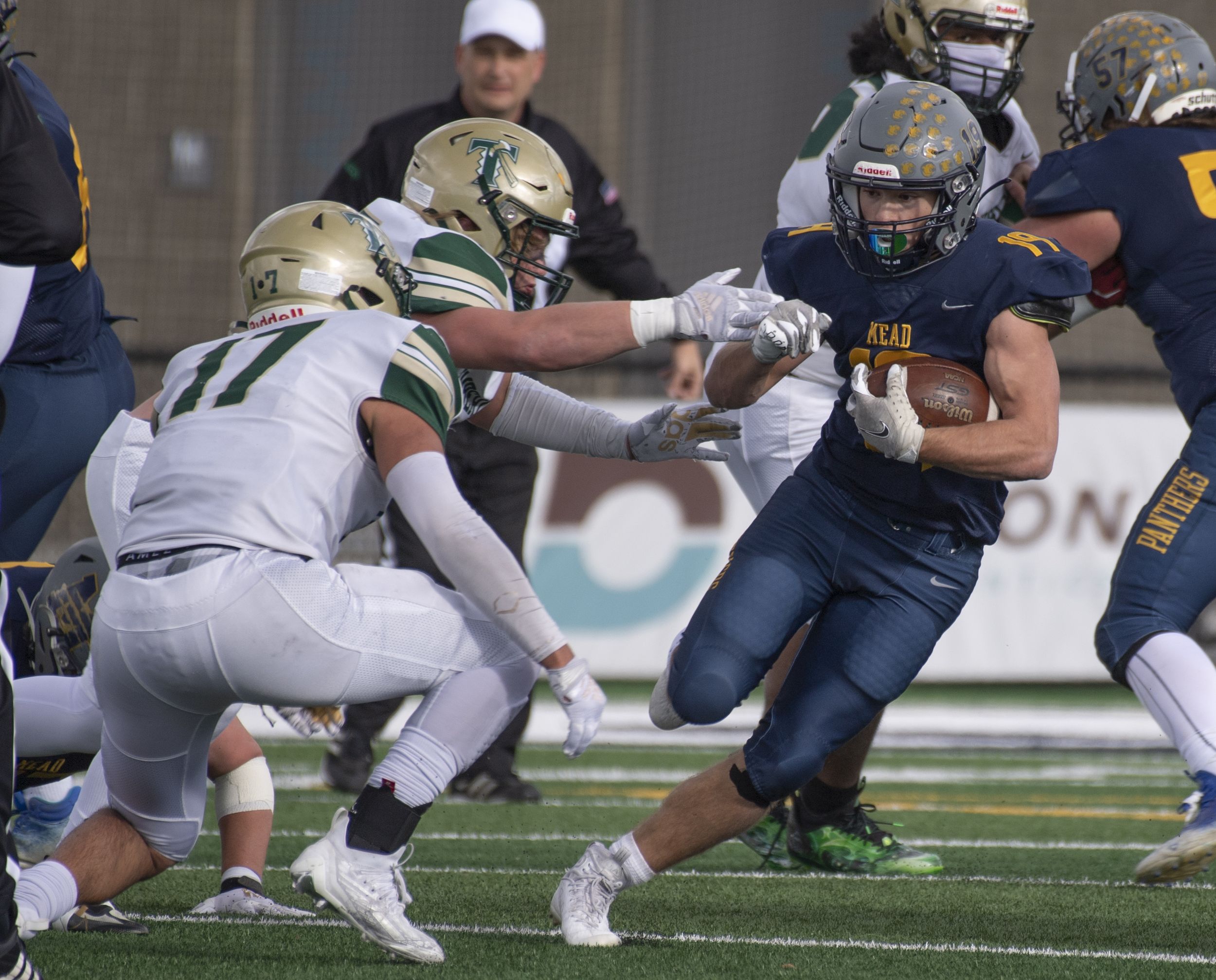 Preps: With the wind blowing upward of 40 miles per hour, the running game was paramount in Mead’s 28-7 playoff win over Timberline. The Panthers advance to state. Dave Nichols has the story and Jesse Tinsley the photo gallery. … Keenan Gray was at the State cross country races and has this story. … Dave also has a roundup of other action.

Chiefs: Spokane has lost seven consecutive games after Saturday’s 5-3 loss to visiting Prince George. Kevin Dudley was at the Arena and has this coverage.

Seahawks: The Cardinals are waiting in the desert with revenge on their mind.

Mariners: Houston, and Dusty Baker, have finally won a World Series title. If we were commissioner, the Astros’ 2017 title would have been expunged or carry an asterisk after they admitted to cheating. But by defeating the Phillies in six games, they have the 2022 title to fall back upon. Unless something untoward shows up later.

Kraken: Hottest team in the NHL? It may be Seattle, which won 3-2 last night in Pittsburgh. … The Kraken are killing penalties better.

• If you’re wondering, much of the tree limb is still sitting on our roof. But it doesn’t seem to have caused any damage. And we cleared off a lot of branches, filling up our green recycling bin in the process (if you live in Spokane, you know what we’re talking about). Until later …