A GRIP ON SPORTS • We’ve reached that point. The point in which college football and college hoops overlap. In which every morning is filled with story after story about good ol’ Whatsamatta U. and its conference rivals. You know, nirvana.

• Every year it arrives. It’s earlier these days than it was, say, a decade ago and a heck of lot earlier than back in the dark ages of the 20th Century. But it never seems to fail to surprise us. 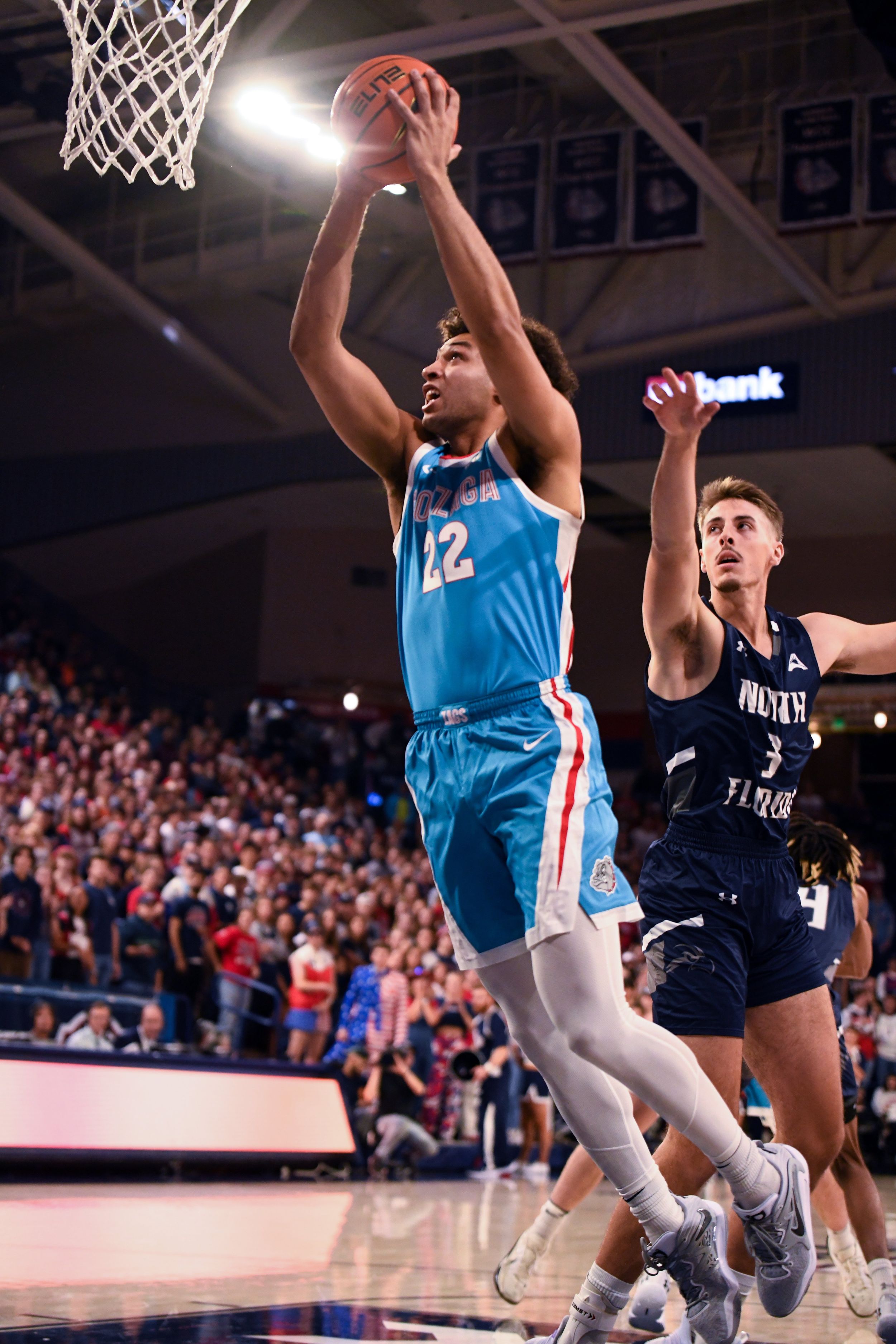 That extra hour of sleep we were granted this week didn’t even come close to the many hours we will have to devote to college hoops, did it?

Gonzaga opened its season last night hosting North Florida, which has a cool nickname – the Ospreys – but not much in the way of hoop talent. The Kennel wasn’t full – heck, even Greg Heister and Dan Dickau were somewhere else – thanks to the weather but it was loud enough to discombobulate the visitors. And help lead the Zags to another season-opening win.

Which seemed to be Monday night’s theme. Every Pac-12 men’s team played on the season’s first official day. And all but two won. Off the top of your head, can you name the two who fell short? Heck, we’ll give you one, because you would have picked California anyhow. The Bears are that bad and began this season with a 75-65 home loss to UC Davis.

Get the other one yet? OK, here’s a hint. The coach of the other Pac-12 school that lost at home once coached at the school that came in and embarrassed his team.

Give up? It is USC, who couldn’t but a pea in the Gulf of Mexico and fell 74-61 to Florida Gulf Coast. Maybe Andy Enfeld felt as if he owed his old school a win. Who knows? 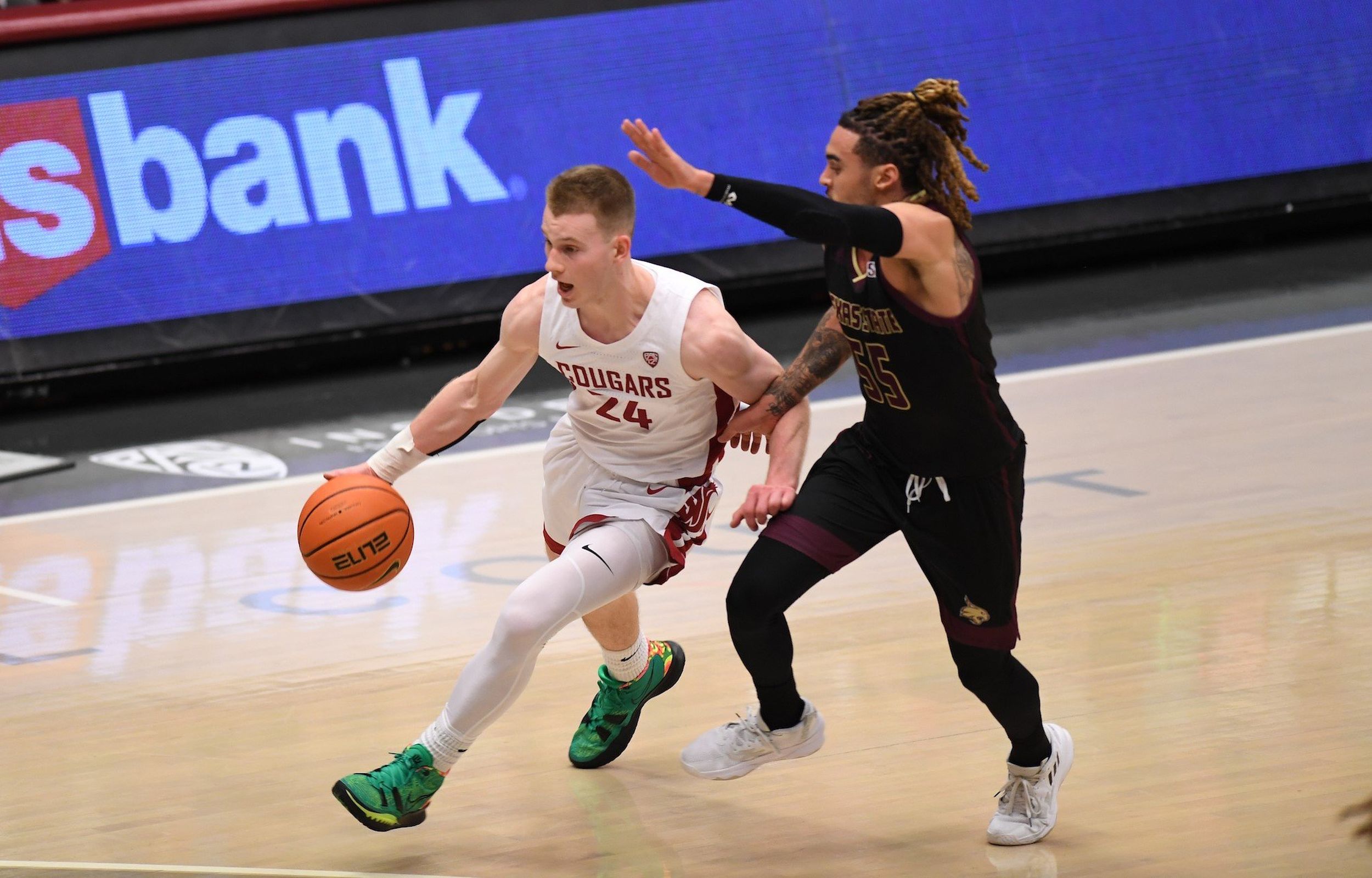 Every other Pac-12 team won, many by double digits. That latter group includes Washington State, which passed by Texas State 83-61 in Pullman. The Cougars’ transfer guard, Justin Powell, dished out 12 assists and Kyle Smith’s team showed a new-found propensity for sharing the basketball. That will bode well for down the road.

Speaking of down the road, Eastern Washington had to take to it last night, traveling to Santa Clara. The Broncos, who expect to have another successful WCC campaign, rallied for an 84-72 victory as Eastern was saddled with some foul trouble.

A visiting team’s best player picking up two fouls in 90 seconds? Yep, college basketball is back folks. In all its glory.

• Who knew Pete Carroll could be passive-aggressive?

The Seahawks’ coach always seems to be pretty tight lipped, not criticizing his players in any way. It’s always positive for him, even if the rest of the world sees only the negative.

Yet there he was Monday, talking about the smooth-running Seattle offense on a Seattle radio show and he managed to get a dig in. Not on Geno Smith, his current quarterback. Nope. He threw a jab at the former guy.

Brock Huard wanted to talk about how smoothly the offense was running, with fewer issues with the play clock and getting the unit organized pre-snap.

And Carroll had an answer.

“If you notice, Geno’s going off the wristband, and that’s a big help,” Carroll said on The Pete Carroll Show on 710 AM in Seattle. “It’s smoothed things out, sped things up, cleaned things up. And that’s part of it, too. We never did that before. There was resistance to that, so we didn’t do that before.”

Resistance? Guess who he’s referring to there. Yep, Russell Wilson.

What’s interesting about the statement, is it’s about as close as Carroll has gotten to criticizing his former quarterback. The first time we’ve noticed a crack in his speak-no-evil policy. There may have been others, but they flew right over our head. This one was too easy to miss.

Now we have to wonder. Will there be more? 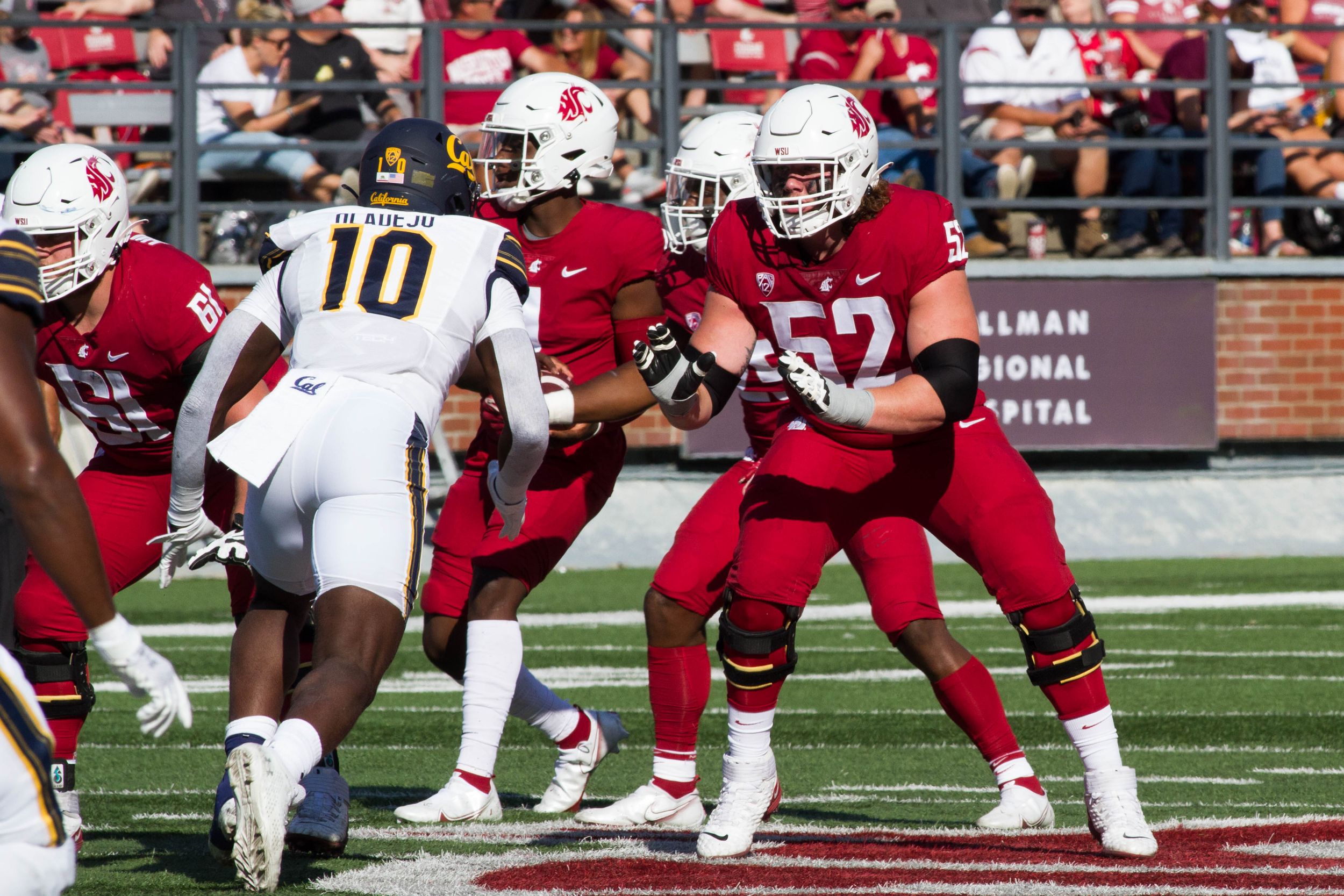 WSU: The Cougars win was not unexpected, as they were favored. But how they won seemed to open eyes among the school’s followers. That is, if social media is any indication. Smith, however, saw it coming. Colton Clark talked with him after the game and has this story. … Colton also shares the bad news left tackle Jarrett Kingston is out for the season after suffering a leg injury against Stanford. … Arizona State is worried about the WSU running game. … Elsewhere in the Pac-12 and college football, Jon Wilner has his power rankings in the Mercury News this morning, a column in which he also shoots down premature news about San Diego State and the conference. … John Canzano also covers that on his website. … Back to Wilner, he checks out the odds for the upcoming week. … Washington’s Michael Penix Jr. has proven he can bounce back from mistakes. … Oregon should be healthier for their matchup with the Huskies. Both are ranked and it should be a good game. … Oregon State’s Chance Nolan will be given a chance when he’s healthy. … It’s a short week for Colorado. … Zach Charbonnet is not 100% yet for UCLA. … Utah has lost its sack leader for the season. … In basketball news, we can pass along stories from wins by Washington, a couple each from Oregon and had-to-rally-to-win Oregon State, the same with Colorado and Utah, stories from Stanford, the USC loss and UCLA’s easy win, Arizona’s rout and Arizona State’s victory. … The Stanford women played to their No. 2 ranking. 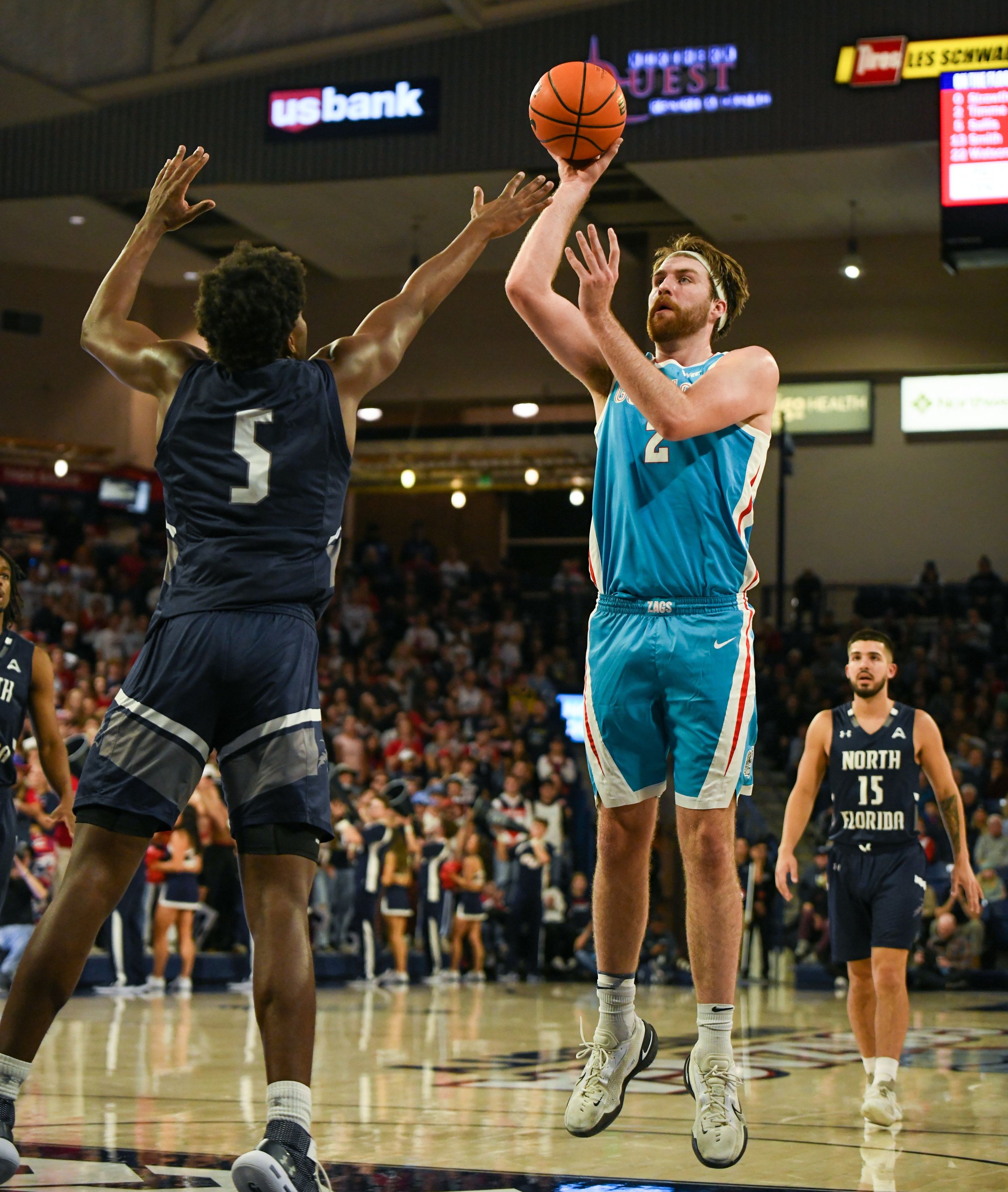 Gonzaga: We were in the Kennel last night – the ride to the game was interesting to say the least – and watched as GU went on a 26-0 first-half run to put it away. Jim Meehan has the game story and another on a Naismith list that includes Drew Timme and Julian Strawther. … Theo Lawson chips in with a look at the defense and the difference makers. … Jesse Tinsley has a photo gallery. … Quinn Welsch has this story on the Zags’ celebration of Native American History Month. … Jim Allen walks us through the nonconference schedule for the women. … Despite having just defeated Portland 2-0 recently (and finishing ahead of UP in the WCC), the Zag women’s soccer team was passed over for the Pilots by the NCAA soccer selection committee. Jim Allen has more. … Elsewhere in the WCC, BYU had to hit a last-second 3-pointer to top visiting Idaho State. … Pacific has forfeited an upcoming volleyball match at BYU.

EWU and Idaho: As we mentioned above, the Eagles lost at Santa Clara. The story also includes the Vandals’ loss as well. … Elsewhere in the Big Sky, just how good is Montana’s football team? … Montana State has a breather this week. … Idaho State is turning to younger players. … UC Davis, like the rest of the conference, is ready for major challenges. … In basketball news, the Griz open Travis DeCuire’s ninth season. … Montana State came close at Grand Canyon. … No. 3 Houston routed visiting Northern Colorado. … Weber State stayed with UW until the end.

Seahawks: Seattle is playing so well that, if it keeps up, there will be a lot of awards earned by the group. … Tom Brady will have to deal with the Hawks’ revitalized pass rush. … Questions? We have some answers to pass along. … It’s a long way from Framingham State to the NFL.

Mariners: No surprise here. Julio Rodriguez is an American League Rookie of the Year finalist and Scott Servais is the same in the manager category. … Free agency is upon us. The M’s have five. Will any be back? … The M’s are already making a big push to sell next year’s tickets. … We look at projected trades with a bit of a jaundiced eye. However, this one actually makes sense.

Kraken: Shane Wright has been helped by a teammate.

• Man, it is cold outside. Our weather app says 21 degrees. Really? Anyone else see Brandon Stark in their neighborhood? Until later …