A GRIP ON SPORTS • We’ve mentioned it before. We mention it again. It’s a weird weekend for local sports. Though today is pretty normal. 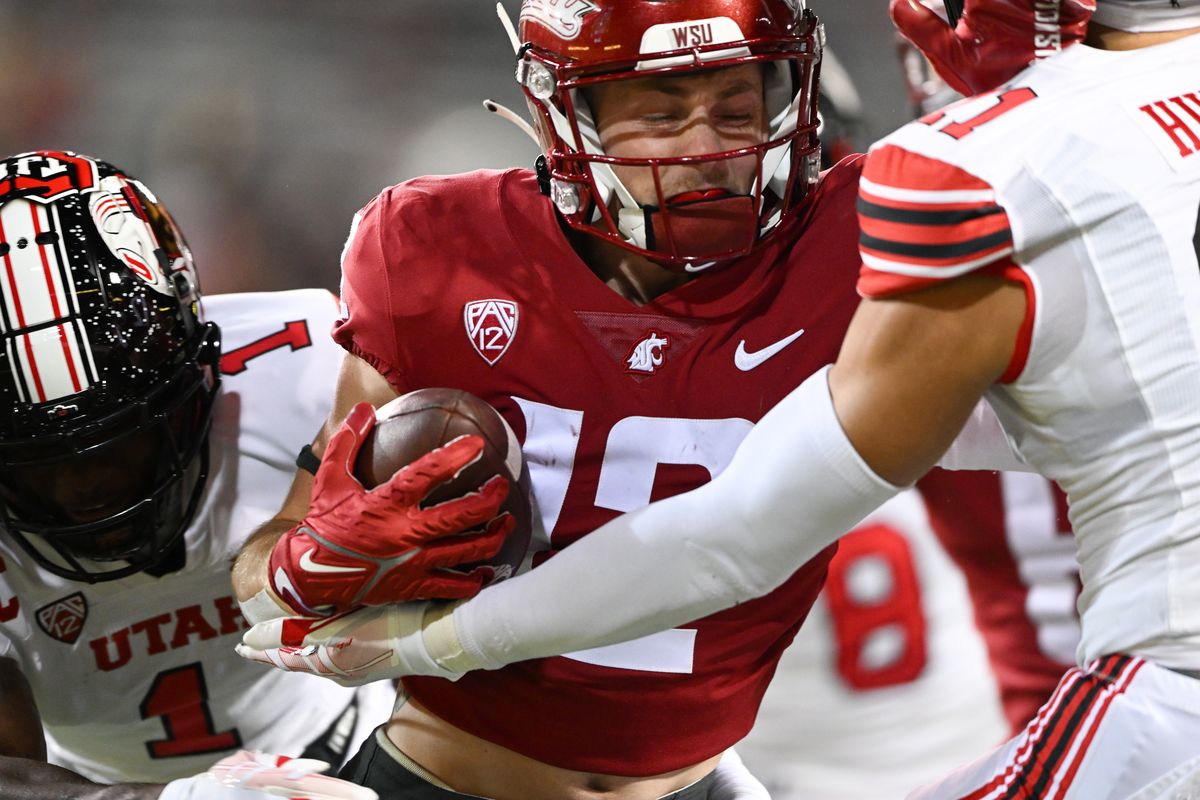 • The Cougars host Arizona State today. Nothing odd about that. A bowl is there for their taking. Nothing odd about that anymore either. A November afternoon with the highs in the 30s? That’s not all that normal but not out-of-the-ordinary either. Full stands? Well, we’ll see. That would be odd considering the early start time (12:30, Pac-12 Networks) and lack of palatable buzz about the Washington State football team this season.

There doesn’t seem to be a lot of emotion either way about the Cougars. No anger, not a lot of excitement. It goes with the 5-4 territory, we guess. The Cougs have won just about every game folks expected them to win. And, other than maybe the early matchup at Wisconsin, have lost games they probably should have lost.

They’re not mediocre of lukewarm, mainly because those words have negative connotations. Call them medium. That’s better. Not either hot nor cold, good nor bad. They are OK. But OK is good enough for the postseason these days in college football. And good enough in a top-heavy Pac-12 to win a decent amount of football games.

Like today’s. Win and the holidays in Southern California beckon. More practices. A bit longer season. And a successful one – even if not all that buzzworthy.

• Speaking of success, Gonzaga earned the most basic of definitions last evening in San Diego by the slimmest of margins. 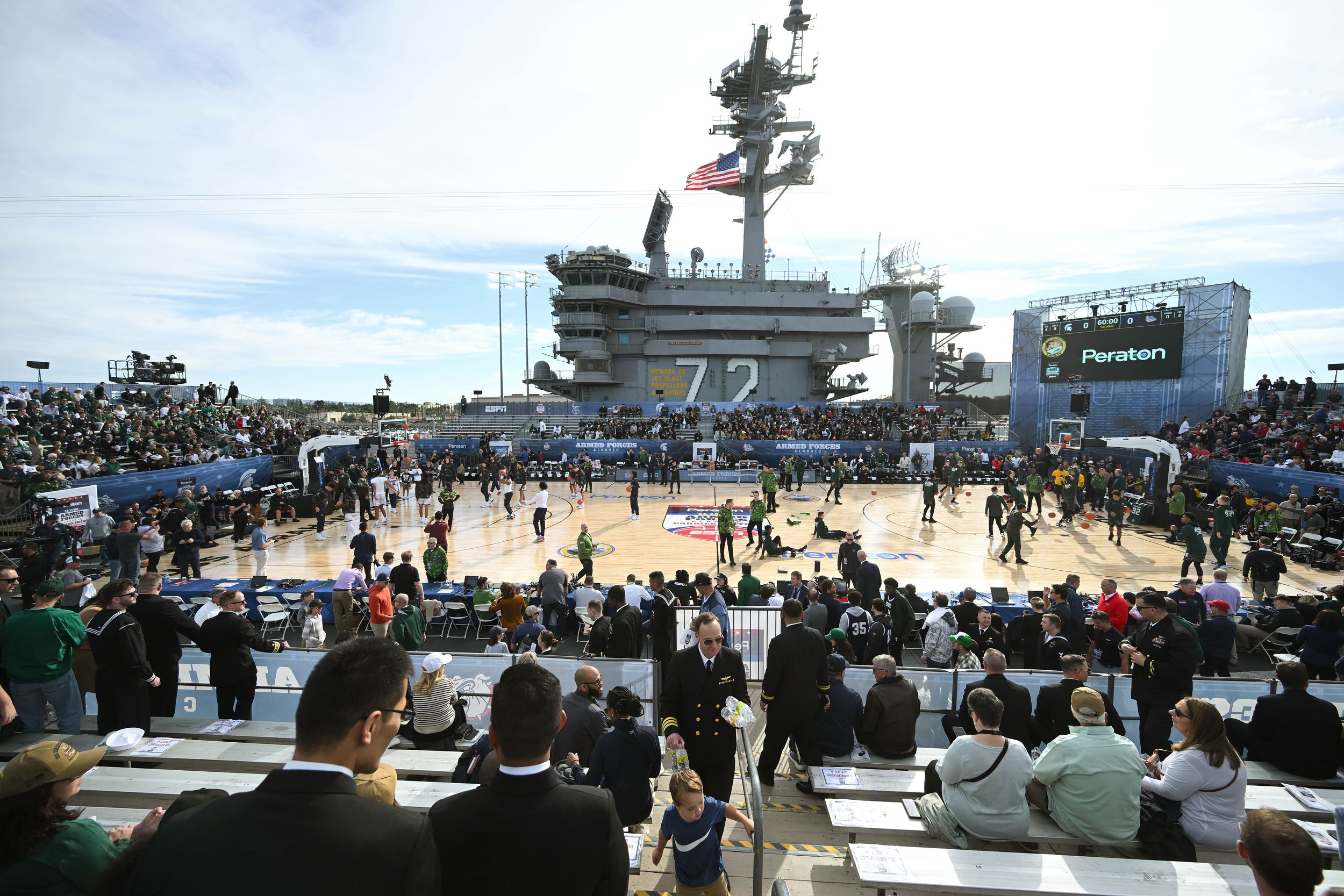 A win is a win. A one-point, hold-on-to-the-railing win is just fine. Except when it isn’t.

Unranked, but not untalented, Michigan State handed the Zags their lunch for much of Friday’s physical contest, pushing the Bulldogs around inside and out, building a 12-point second-half lead and, if not for some odd whistles down the stretch, may have pulled off the aircraft-carrier-sized upset.

Gonzaga losing wasn’t part of that yesterday. But unless the Bulldogs learn the lessons offered, like being more physical around the rim and being more efficient on the offensive end, it will be soon. The nonconference schedule is too daunting for the Zags’ current disjointed attack and, at times, inattentive defense, to survive unscathed.

• Enjoy your Saturday. Get to bed early. The Seahawks play at 6:30 tomorrow morning. That’s early. Not for us, sure, but for many of you, especially on a Sunday morning. 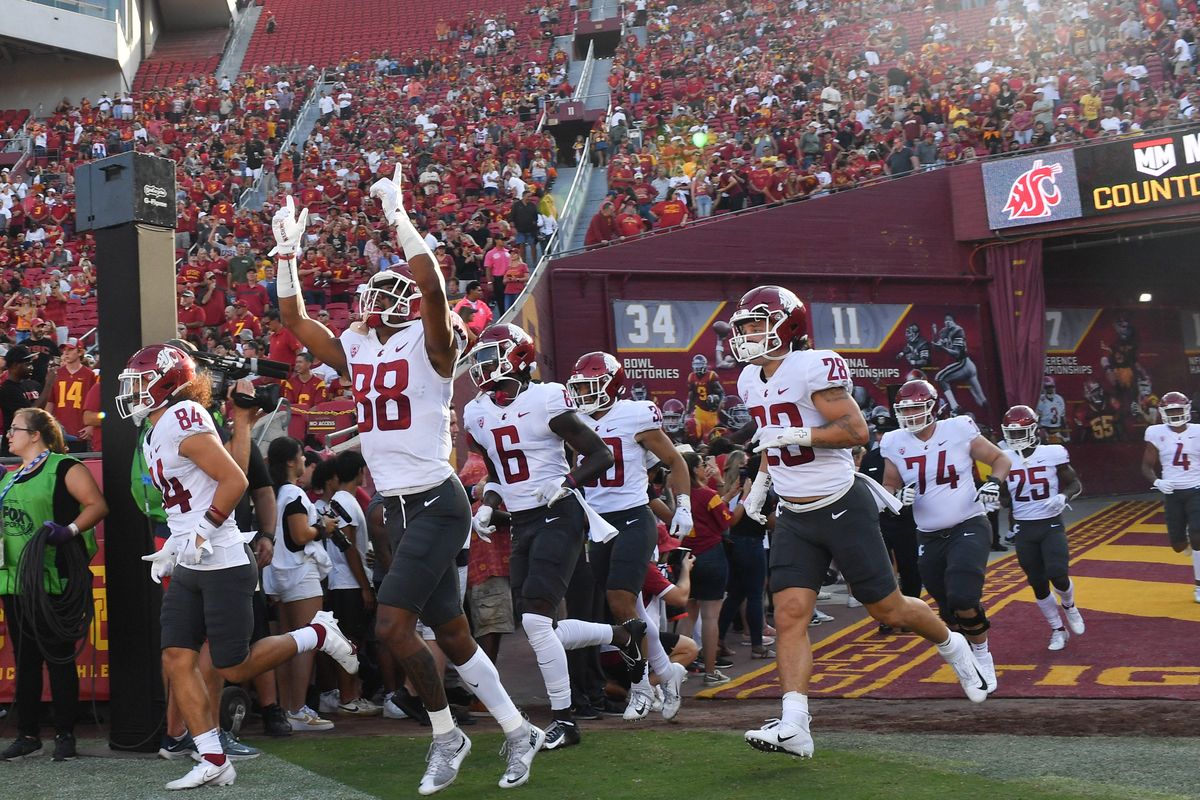 WSU: The solid Cougar defense will try to control a gambling ASU offense today in Pullman. Colton Clark has a preview of the game as well as his pick (Washington State by 14) and the usual two-minute drill. … Arizona State’s interim coach would like to get that one word removed from his title. … Elsewhere in the Pac-12 and college football, Jon Wilner has a mailbag in the Mercury News. He also passes along this look at recruiting. … There was one game last night. Eighth-ranked USC started slowly but still blew out Colorado 55-17. But the Trojans lost key running back Travis Dye for the season to a leg injury. … No. 24 Washington and Oregon meet in Eugene in what both (first-year) coaches see as a new era in the rivalry. We see it as just another chapter in one of the meanest rivalries on the West Coast. The sixth-ranked Ducks are favored. … After a tough loss to Washington, Oregon State has to be looking forward to playing struggling California. … No. 13 Utah has the other struggling Bay Area school, facing Stanford. By the way, ESPN has a documentary on The Play. You know which one. The band, Cal and the wild ending. … No. 12 UCLA hosts Arizona tonight with a lot of questions, not the least of which is who will carry the football. … In basketball news, short-handed Washington struggled against a team GU blew out recently, topping North Florida 75-67. … As we mentioned above, Oregon fell at home to UC Irvine. We won’t gloat. Heck, yes, we will. Go Eaters. … Oregon State picked up a 60-43 win. … Colorado suffered a huge upset as well, losing at Grambling. … Utah routed Cal State Bakersfield 72-44. … Stanford and California both lost yesterday. … UCLA had little trouble with Long Beach State. … Arizona won easily as well. 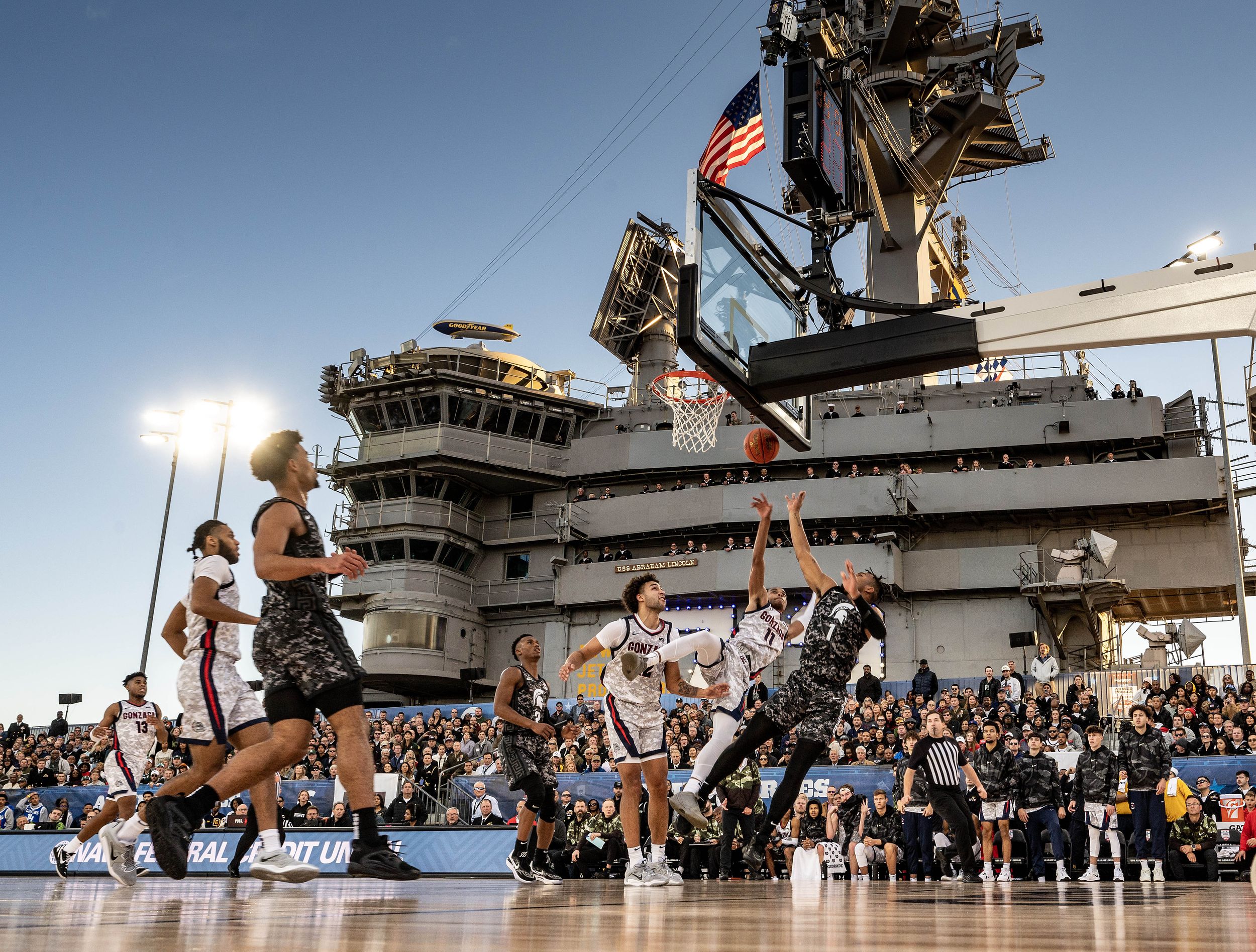 Gonzaga: We pounded out a lot of words recently on the venue of yesterday’s game. The pomp, circumstance and pageantry. No need for more. We leave that to Theo Lawson, who has the game story from GU’s 64-63 victory. Or to Dave Boling, who has this column. To Jim Meehan, who covered the background stuff and the difference makers. And to the folks in the office, who put together the recap with highlights. … Colin Mulvany had a different view, through his camera lens, and he has a photo gallery. … We can offer coverage of the game from other sources as well. … Jim has a story on WCC commissioner Gloria Nevarez leaving for the same job with the Mountain West Conference. Wonder if she saw the ultimate end for a conference that is losing BYU and, who knows, maybe Gonzaga in the not-so-distant future. … Jim Allen has a preview of this afternoon’s game, as the women host Southern Utah. … The Gonzaga men’s cross country team is headed to nationals again. Chuck Stewart has more in this story. … Elsewhere in the WCC, BYU fell at No. 19 San Diego State. …Tyler Robertson has 32 points as Portland defeated Portland State.

EWU: The Eagles head to Missoula for a noon showdown with 16th-ranked Montana. Dan Thompson has the three things you should look for. … Elsewhere in the Big Sky, Northern Arizona hopes to get healthy at Northern Colorado. … Weber State should have little worry with Idaho State. … Same with Montana State at Cal Poly. … There was a game last night, with second-ranked Sacramento State getting a win over Portland State, 45-17. … In basketball, after its coach signed a five-year extension, Northern Colorado picked up a win. … Montana lost at Xavier.

Idaho: The Vandals’ run defense will need to be stout to slow a hot UC Davis team in the Kibbie Dome this afternoon. Peter Harriman has things for you to watch. 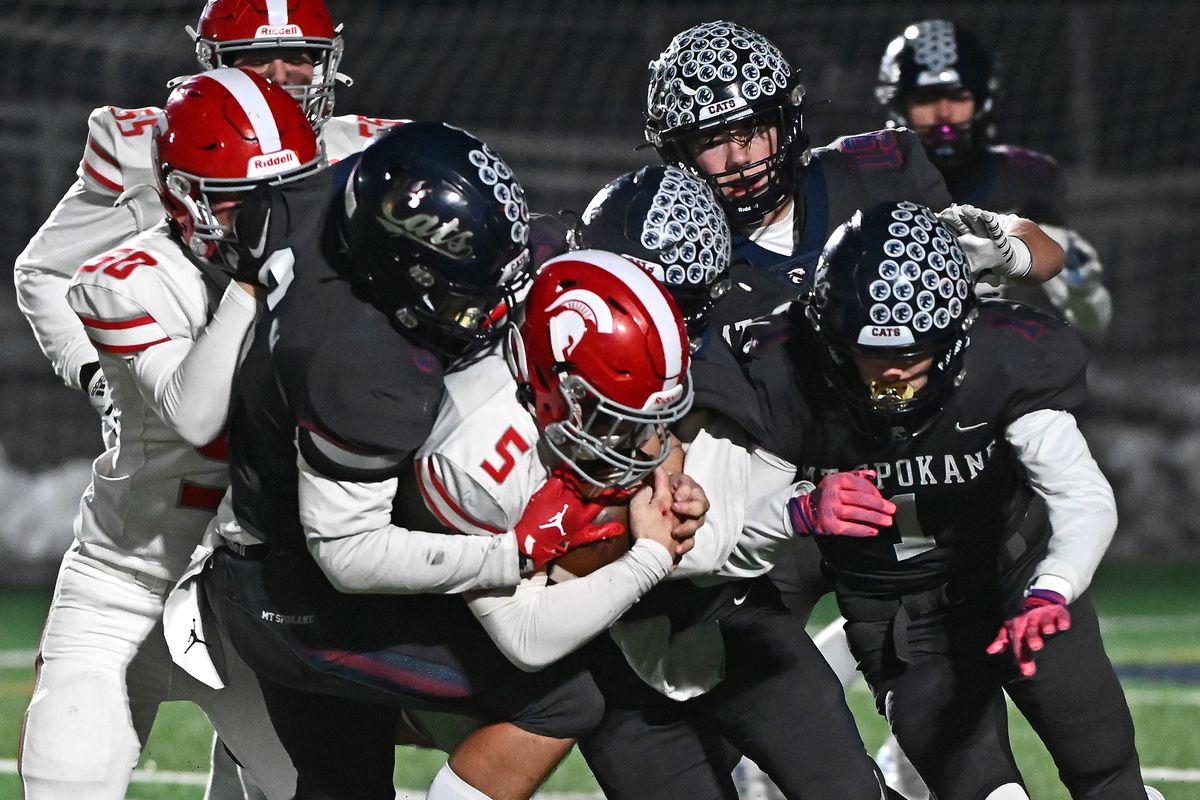 Preps: Football playoffs began last night with Mt. Spokane hosting pound-and-ground Stanwood at Union Stadium. Dave Nichols was at the 3A game and has this story from the Wildcats’ defeat. … Oakesdale won another 1B State volleyball title in Yakima yesterday. … Dave returns with a roundup of the soccer playoffs and a roundup of other volleyball action.

Chiefs: Spokane has lost nine consecutive games, dropping a 7-2 decision to Seattle in the Arena last night. Kevin Dudley was there and has this story.

Seahawks: The game may be in Munich, but the Hawks have enough German fans it may seem like a home game. Though Tom Brady’s large fan club might have something to say about that. … Kenneth Walker III does some amazing things with the football in his hands. … Tyler Lockett ignores the criticism. … Tampa is down. Geno Smith and the Hawks are up. How odd. … Cade Otten has found a home with the Bucs.

Kraken: The shorthanded Kraken saw their five-game winning streak end with a 1-0 home loss to the Minnesota Wild.

• Another Saturday, another morning waking up wondering why we didn’t sleep all that well. It’s this darn cold. Not the cold weather, the cold in our head. It’s lingering. And, yes, we tested. It’s a cold. It’s also unwanted. Time for it to leave us. Until later …