A GRIP ON SPORTS • A defensive win in Tucson, an anticipated matchup in Spokane. What a Saturday and Sunday for the two most-popular sporting entities in the region.

• The ultimate difference between Washington State and Arizona yesterday? The 10 points the Cougars scored either directly due to defensive takeaways or right after them.

The secondary’s four interceptions, two from Sam Lockett III and another from Armani Marsh, both Gonzaga Prep alums, keyed the Cougars’ 31-20 victory in the desert and sent the crowd supporting the visitors back to the winter places happy. 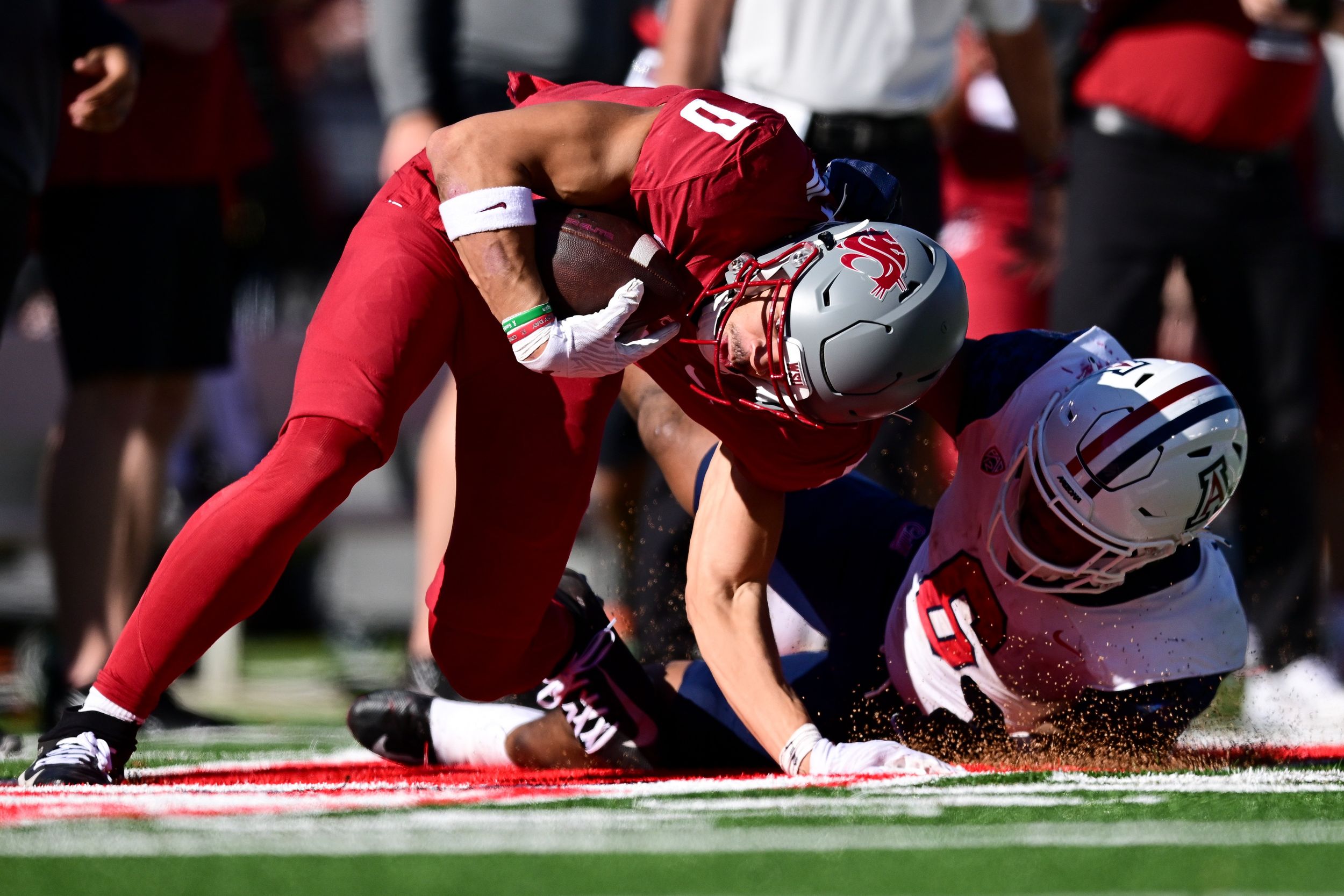 That those picks came at the expense of Jayden de Laura? That’s the Fireball chaser atop the whole day.

Maybe not for the players, as de Laura still seems friendly with his former teammates. Maybe even more friendly than he is with some of his current receivers, but that’s a tale for a later time. But Cougar fans? After de Laura fled Pullman following last season’s losing bowl game, they had a bad taste in their mouth. And not even the memory of his memorable Apple Cup performance could wash it away.

The reports that have emerged recently, including one saying he visited UA en route to the bowl game, haven’t endeared the former Pac-12 offensive freshman of the year to WSU followers either. Now they can let the whole affair rest. Or not. Like elephants, the group never forgets, especially slights.

Fine. But don’t let it overpower an appreciation for what Jake Dickert has done in Pullman with the defense. It’s special. Not perfect, but special.

The Cougars just keep attacking on that side of the ball. When it works (and it’s worked often enough that statistically they are among the Pac-12’s leaders) Washington State wreaks havoc, as it did Saturday. Good offenses – Oregon, USC – have found ways to dent it more consistently, but they do that to everyone. We will find out some time next Saturday if Washington can do the same thing.

For now, WSU has seven wins. The only real difference between its record and Washington’s is the Pac-12’s uneven schedule. The Cougars played Utah (and lost) instead of woeful Colorado. The Huskies were the other way round. Change matchups and maybe both teams are 8-3 heading into the rivalry game, which the Pac-12 announced this morning will start at 7:30 p.m.

Maybe. But it wouldn’t make a difference. It’s going to be fun regardless.

• Today’s Gonzaga vs. Kentucky matchup in the Spokane Arena should be fun too. Though the loser won’t be able to smile, no matter what occurs. 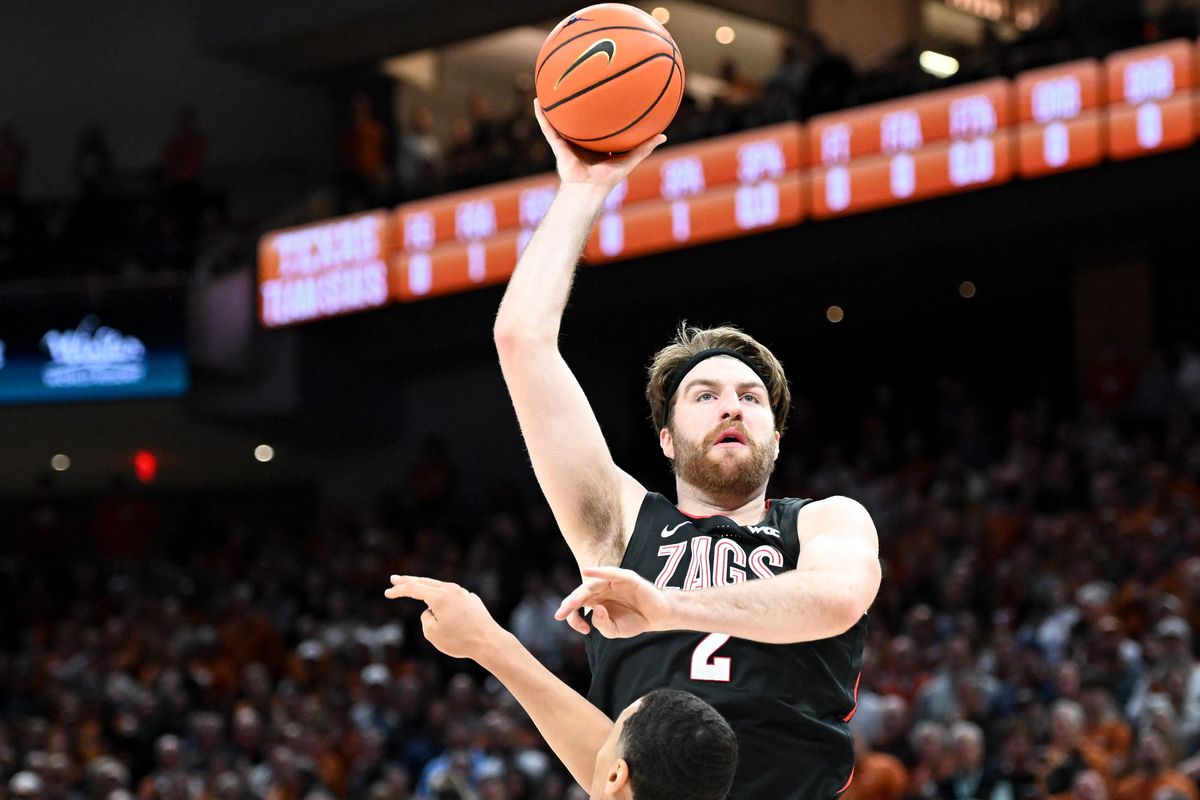 With second-ranked (for now) GU’s loss at Texas and No. 4 (ditto) Kentucky’s double-overtime defeat against Michigan State so recent, each team feels the pressure to get back on track (UK’s rout of an overmatched foe in between notwithstanding).

The onus is probably heavier for the Zags. Mark Few has always played tough opponents in the nonconference and this year is no different. What could be, however, is Gonzaga’s recent success rate. In the previous half-decade or so, GU has won often enough against highly regarded out-of-conference foes it has been insulated against any disparagement of the West Coast Conference schedule. The who-have-you-played questions are moot.

But the whole strategy falls apart if Few’s teams don’t win. Michigan State was wonderful in that regard, as the Zags toughed-out a one-point victory. The Texas loss is the other side of the spectrum, what with America tuning in to see Gonzaga blown out in the second half.

What will this afternoon bring? Get down to the Arena or tune in to ESPN (4:30 p.m.) to find out. 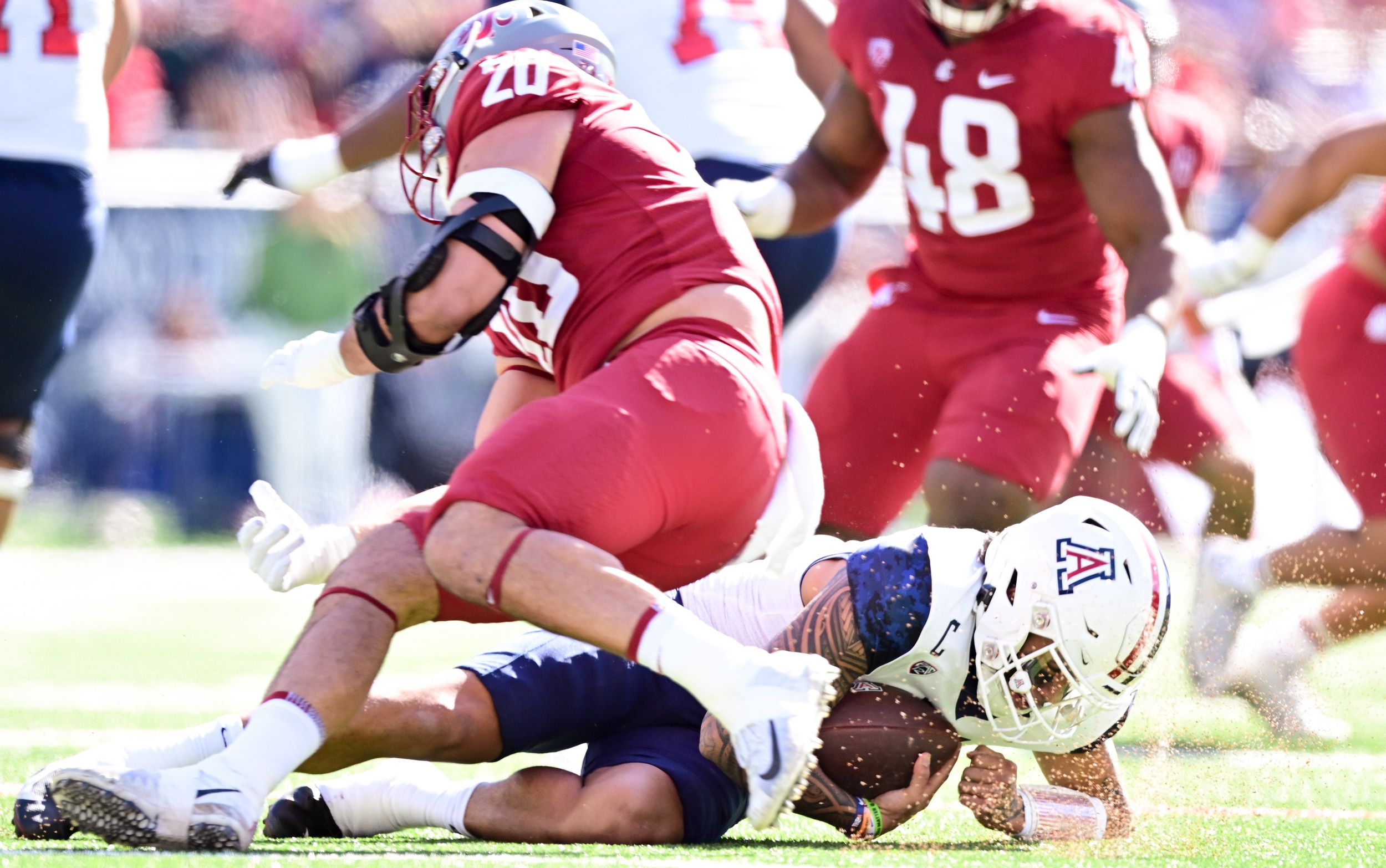 WSU: Nothing out of the ordinary today in the S-R’s coverage, even with the importance of the matchup (at least according to the Pride-O-Meter). Colton Clark has his game story, his difference makers, a feature on assistant coach wearing Virginia colors in honor of players he once coached and a pregame piece on injured Cougar players returning to action. … Tyler Tjomsland has a photo gallery that catches the essence of the contest. … We have our TV Take that spends a lot of space on de Laura’s sideline confrontation. … The folks in the office put together a recap with highlights. … We can share stories from the Tucson side of things as well, with de Laura’s actions covered pretty extensively. The Wildcats are no longer in the hunt for a bowl berth. … Elsewhere in the Pac-12 and college football, Jon Wilner does what he does, looking back quickly at the weekend. He covers the Pac-12 title game and the CFP implications of yesterday’s results. … As we mentioned above, Washington routed Colorado 54-7 to set up another special Apple Cup next weekend. The Huskies can still make the title game but it would take an upset by California over UCLA. That’s all part of the possibly convoluted tiebreakers coming into play. … The Buffs have one more game left before the search for a new coach begins in earnest. … Stanford collapsed in the fourth quarter and lost the Big Game to California 27-20. The Cardinal did connect on 61-yard field goal as time expired, allowing the over to win for any alum who placed a wager. … USC stayed alive in the CFP chase with a memorable 48-45 victory against crosstown rival UCLA. Caleb Williams’ performance may get him to New York. The Bruins’ won’t get them to the Rose Bowl game. … Oregon’s Bo Nix hobbled his way around the Duck defense picked off Cam Rising three times en route to a 20-17 must-have victory. Win next week and Oregon will face USC in the Pac-12 title game no matter what else happens. … Oregon State will have a say in that. The Beavers pounded Arizona State 31-7 and now go into the unnamed rivalry game with Oregon on a roll. And they’ll be at home. … In basketball news, Oregon State lost for the first time and it came against Portland State of all teams. … Colorado will face Boise State today. … After a loss to Illinois, UCLA has to face No. 5 Baylor. … Arizona hosts Long Beach State. … The battle of No. 1 and No. 2 between South Carolina and Stanford is today. 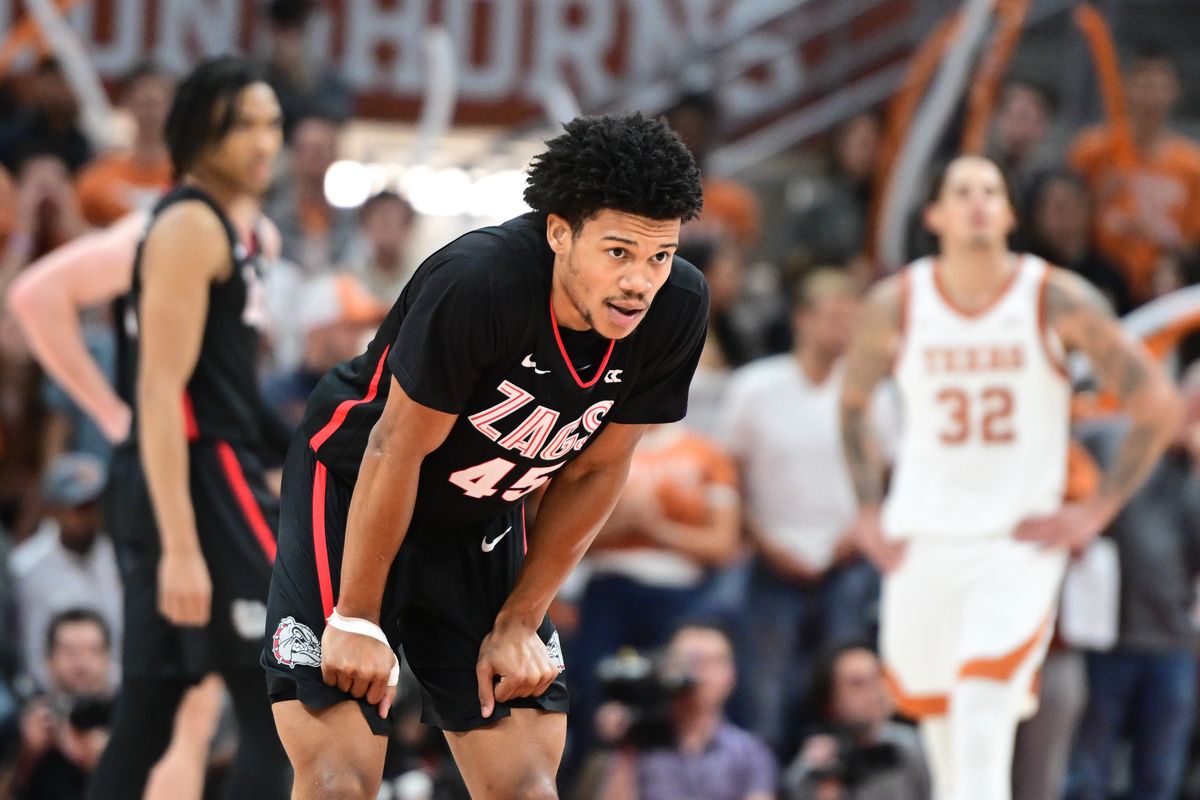 Gonzaga: Before we look ahead, let’s look back just a bit. The women traveled to the Bahamas where they met the team, Louisville, that ended their last season in the NCAA tourney. In this holiday tournament, Gonzaga got its revenge, dominating overtime and upsetting the sixth-ranked Cardinals 79-67. Jim Allen has the coverage of the Zags’ best-ever upset of a ranked team. … It seems as if everyone has thoughts about this afternoon’s Arena matchup. Kyle Wiltjer does, as Jim Meehan tells us. … They all want to see Drew Timme and Oscar Tshiebwe face off in the middle. That’s Theo Lawson’s contention anyway. … Meehan looks back to Tshiebwe’s last meeting with GU. … Theo also has a preview of the game and the key matchup. … The cross country team posted its best finish in an NCAA championship race, ending up 13th overall. … The baseball program has filed plans to make huge changes around the Patterson Baseball Complex. 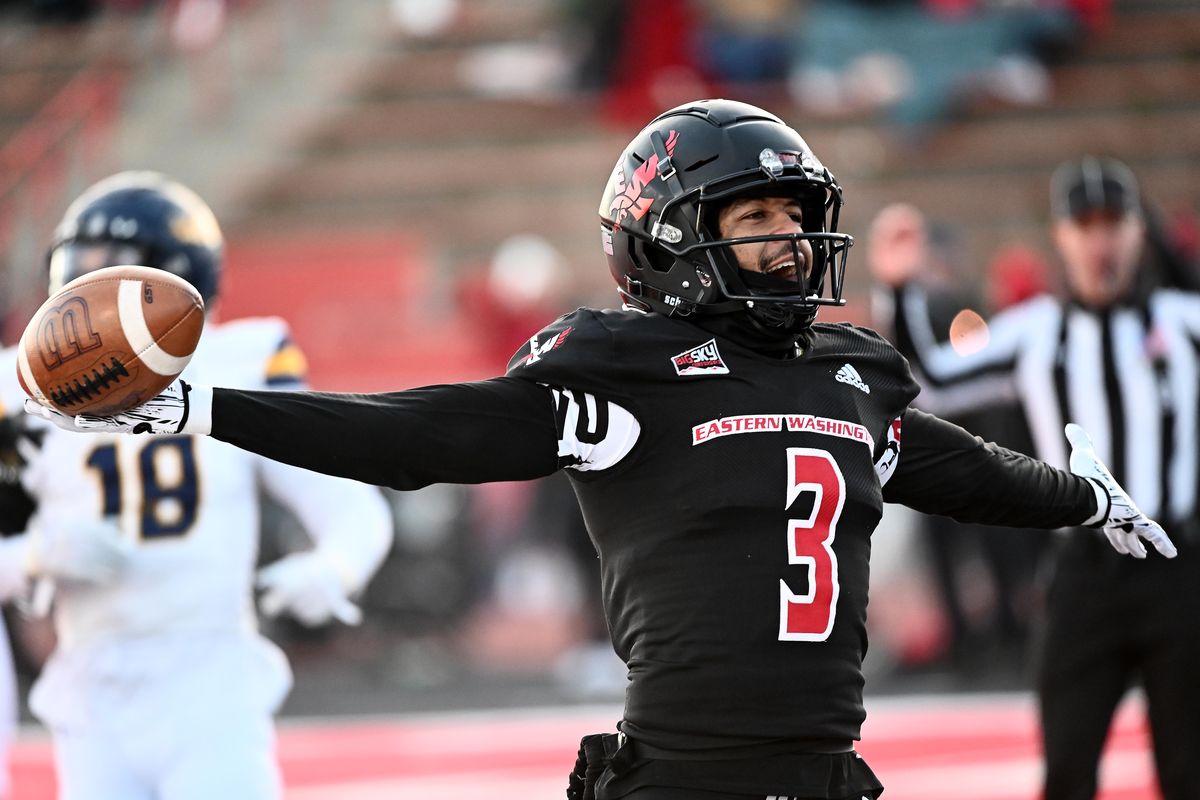 EWU: Eastern Washington ended a down season on a huge up-note, pounding visiting Northern Colorado 45-17. Dan Thompson has that story and a notebook that begins with coach Aaron Best earning a vote of confidence. … Elsewhere in the Big Sky, the Brawl of the Wild turned out to be a Bobcat beatdown. Montana State ran No. 13 Montana out of the stadium 55-21 and in the process probably assured the Griz of a non-playoff season. … Second-ranked Sacramento State held off UC Davis 27-21 but the Aggies might make the postseason anyway. … Weber State handed Northern Arizona a heartbreaking 33-31 rivalry defeat. … Cal Poly finished up its season with a surprising 49-47 win over visiting Portland State. … In basketball news, Montana fell to Troy. … Northern Colorado lost to San Jose State. … One last note. Northern Arizona won its third consecutive NCAA men’s cross country title. 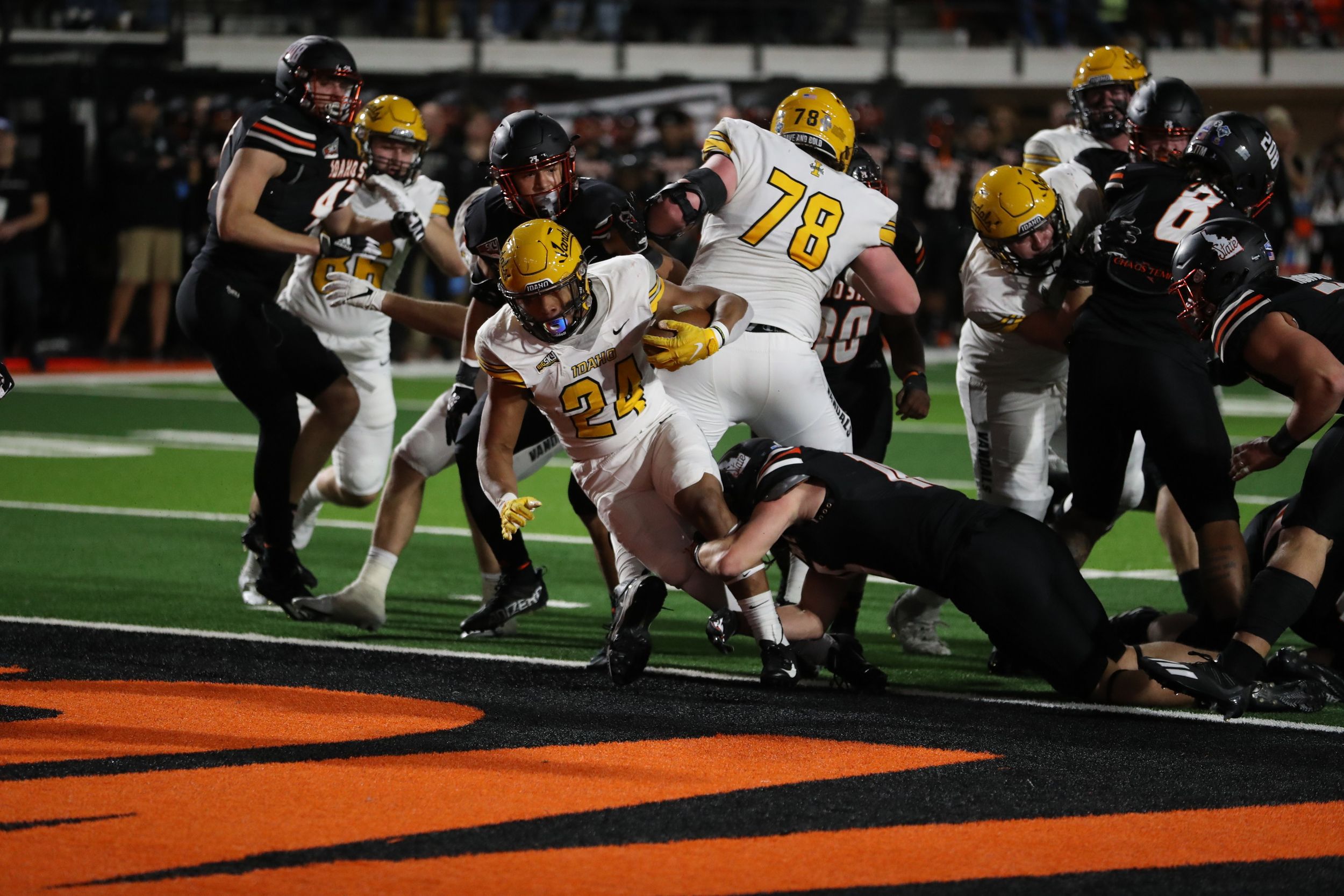 Idaho: It looks as if the 7-4 Vandals will appear as a wild-card team in the FCS playoffs. Jason Eck’s first season is a resounding success following a 38-7 win over host Idaho State to culminate an awfully taxing week in Moscow. … The Bengals played without Xavier Guillory, suspended for the season finale after a DUI in October. … The Vandal men’s basketball team lost to visiting Utah Tech 81-71. Peter Harriman has this game story.

Preps: Gonzaga Prep’s 4A football title hopes ended Saturday with a 42-17 loss to Lake Stevens. … Lakeside’s 1A hopes also ended with a 35-20 loss to Mount Baker. … Though we don’t have a story to pass on, Freeman is still alive after a 23-17 win over Eatonville on the road.

Chiefs: Spokane’s defense was porous once again as Calgary put 60 shots on net en route to a 6-2 victory at the Arena. Kevin Dudley has the story.

Sounders: The World Cup is underway. It is also every player’s dream, including the pair of Sounders who will participate.

• We only counted six direct references to Jayden de Laura having played at Washington State in the matchup with Arizona yesterday. Then again, there may have been some late but by then we were busy writing and had lost interest in counting. Until later …