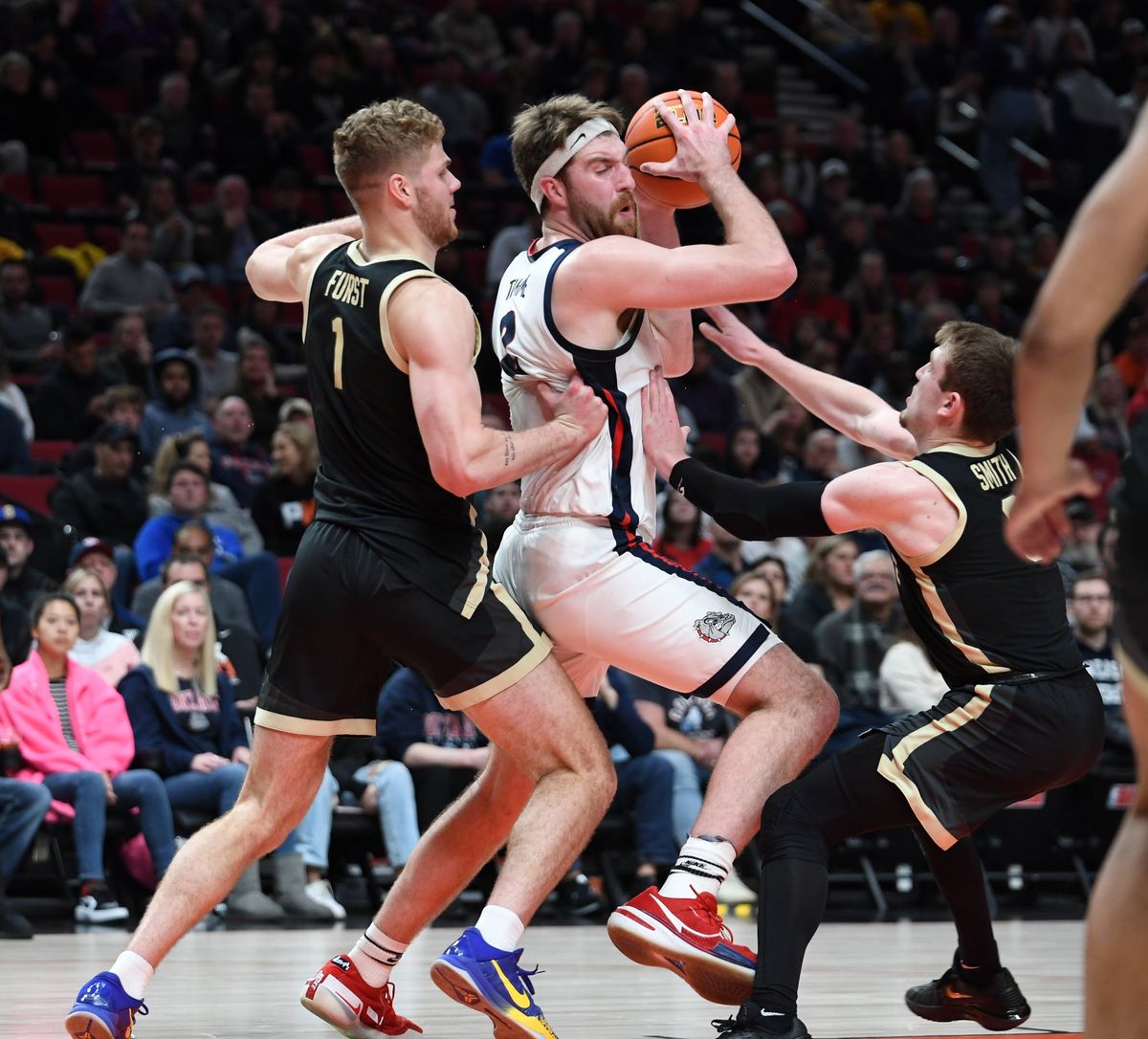 Gonzaga’s Drew Timme, center, is doubleteamed in the paint by Purdue’s Caleb Furst (1) and Braden Smith, right, early in the second round game between Gonzaga and Purdue at the Moda Center in Portland, Oregon. (Jesse Tinsley/The Spokesman-Review)

PORTLAND – Zach Edey proved to big of a challenge.

The 7-foot-4 center led a suffocating defensive effort for Purdue, which ran away with a 84-66 win over Gonzaga in the semifinals of the Phil Knight Legacy tournament at the Moda Center.

Edey scored a team-high 23 points, while a pair of freshman guards, Loyer Fletcher and Braden Smith added 14 apiece behind him.

Purdue, which advances to Sunday’s championship against Duke, limited Gonzaga to 40% from the field and many inconsistent jump shots. The Zags didn’t shoot a free throw until there was 9 minutes remaining in the second half.

Drew Timme led Gonzaga with 22 points and Nolan Hickman added 15. The Bulldogs will play Xavier in the third place game at 4:30 p.m. on Sunday. That game will be broadcast on ESPN.

PORTLAND – They quelled their turnover issues. They threw the first punch, racing out to an eight-point lead less than 5 minutes in. They got another 20-point outing from Drew Timme, season-high production from Nolan Hickman and late shot-making from reserve forward Ben Gregg. | Read more

For most of the night, Gonzaga leaned heavily on Drew Timme and Nolan Hickman at the offensive end. The pair finally got some help from an unexpected source when Ben Gregg, who played at nearby Clackamas High School, provided a second-half spark in the Zags’ 84-66 loss to Purdue in the semifinals of the Phil Knight Legacy tournament. | Read more

15:43 – GU 10, PU 4: Gonzaga starts strong at the first media timeout, as Hickman leads with five points and Timme comes up with a big block on Edey.

Zags on the floor in Portland. They fared well in their last game at the Moda Center. pic.twitter.com/l3dXYgyhbR

7:18 – GU 16, PU 14: Loyer connects on his second 3-pointer, to cut into the Zags lead and Timme is called on an over-the-back foul on the other end to reach the U8 media timeout.

Gregg checked into the game and put in a good defensive shift on Edey, who is 1 of 5 and has no rebounds.

Earlier a collision on the sideline sent a fan’s beer flying through the air.

Brandon Newman and Julian Strawther collide near the sideline while chasing down a loose ball.

PA announcer: “A beer is down on the court. Call on the floor is ‘out of beer.’ Correction, ‘out of bounds.’”

Gonzaga led by as many as eight in the first half, but a 15-3 Purdue run sent the Boilermakers to a 33-28 lead over the Bulldogs at the Moda Center in Portland.

Gonzaga shot 34.3% from the field and converted 4 of 15 3-point attempts. Drew Timme leads with 11 points and Nolan Hickman added eight. Not much else working for the Zags on the offensive end.

Purdue’s Zach Edey and Braden Smith lead with eight points apiece. The Boildermakers are shooting 38.7% and made 4 of 15 3s.

Gonzaga is yet to attempt a free throw.

This is #Gonzaga‘s lowest-scoring half of the season. Zags scored 31 in the first against #MSU on the aircraft carrier. https://t.co/L4lv3zNZKN

A 7-0 run featuring back-to-back baskets from Timme and a transition 3-ponter from Bolton got the Zags back into it iin less than a minute.

13:04 – PU 49, GU 40: Few goes with a smaller lineup to try and spread the floor and Purdue takes advantage, feeding Edey inside to extend its lead.

Gonzaga’s offense can’t get anything going and will need a major turnaround to make a comeback. Zags shooting 35.8% and are yet to attempt a free throw.

Zach Edey getting it done on both ends of the floor for @BoilerBall 🔥 pic.twitter.com/cLguVTlI6U

The big man has 20 points, six rebounds and two blocks and will head to the free throw line for a pair.

3:41 – PU 72, GU 60: Gregg heads to the bench with his fifth foul at the U4 media timeout. Purdue will shoot bonus free throws when play resumes, looking like the Boilermakers will go on to win this one.

Assuming the majority of Gonzaga fans were deep in the middle of a turkey-fueled slumber during last night’s win over Portland State, here’s what you missed:

• Breakout games in the back court for Malachi Smith and Hunter Sallis, who totaled 23 and 12 points, respectively, thriving in a new-look small ball lineup.

• A season-high mark in assists at 24 and limiting turnovers to 11.

The win sets the stage for the No. 6 Bulldogs (4-1) to play No. 24 Purdue (4-0) in the semifinals of the Phil Knight Legacy tournament at 8:30 p.m. at the Moda Center in Portland. The game will be broadcast on ESPN.

The Boilermakers lost last year’s leading scorer Jayden Ivey to the NBA draft, after a disappointing loss to St. Peter’s in the Sweet 16.

Coach Matt Painter returned 7-foot-4 center Zach Edey to lead this years team, which handled West Virginia in the first round of the PKL 80-68. Purdue also has wins over Milwaukee, Austin Peay and Marquette.

The loser of Gonzaga-Purdue will play Xavier in the 3rd place game at 4:30.

All we got again tonight. pic.twitter.com/xQ0r0HCGWL

“He’s really good. I think he’s got that underrated quickness almost. He’s really shifty in the post, a lot of shimmies, a lot of up fakes, a lot of deception.” pic.twitter.com/UVVniC7Wbx

Gonzaga and Purdue have played twice in their all-time series, with the Boilermakers winning both games. Purdue beat Gonzaga in consecutive seasons, 83-68 on Nov. 18, 1998 and then in the Sweet 16 of the 2000 NCAA Tournament, where Purdue won 75-66.

PORTLAND – Gonzaga’s road to the Phil Knight Invitational title will go through the Big Ten Conference and its most immovable force. | Read more

No wake-up call was necessary for the sixth-ranked Zags, who seized control midway through first half and cruised to a 102-78 victory over the Vikings at Veterans Memorial Coliseum. | Read more