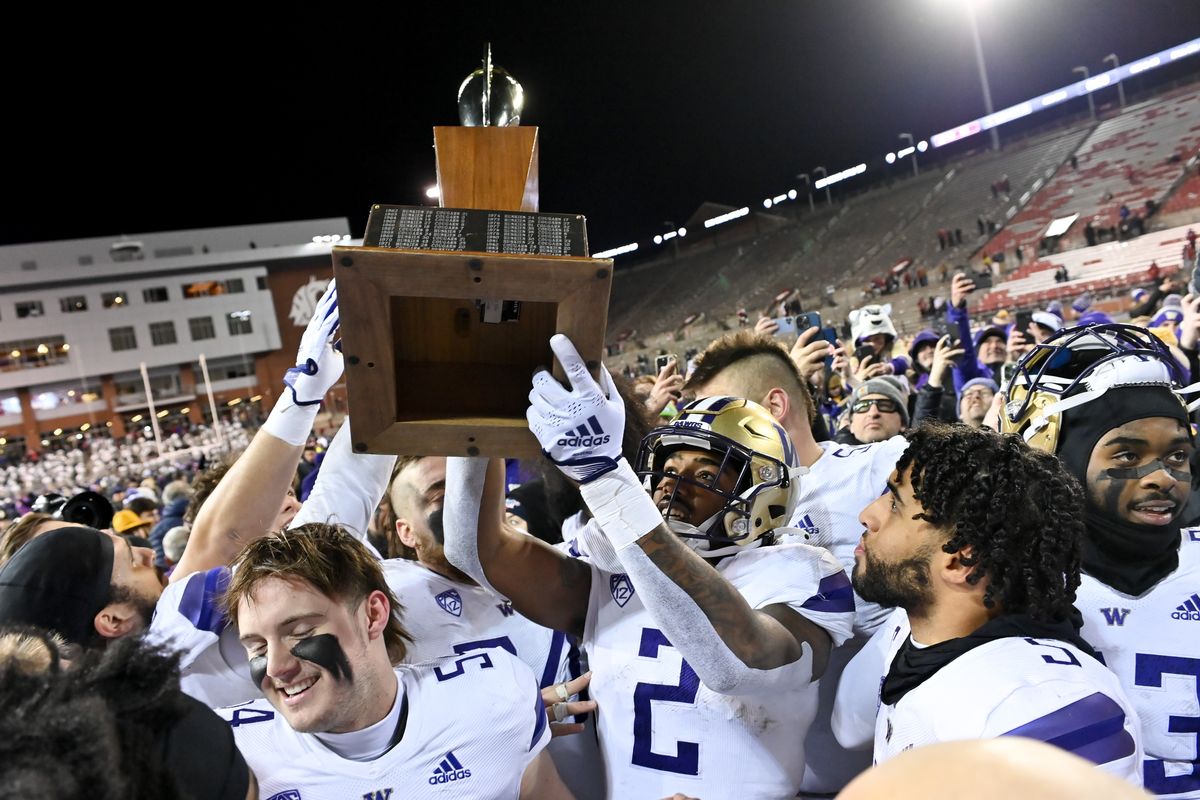 PULLMAN – Washington State played like it could ill-afford an empty possession.

The Cougars couldn’t if they wanted to keep pace with Washington on Saturday.

The two rivals traded blows in the first half, but the Cougars couldn’t keep up in the second, as the Huskies won 51-33 to reclaim the Apple Cup trophy at Gesa Field.

No. 12 Washington (10-2, 7-2 Pac-12) punted on its first possession and then rattled off five straight touchdown drives.

Cameron Ward did he best to match Penix’s effort.

Ward completed 32 of 51 attempts for 312 yards and two touchdowns. He added another touchdown on the ground.

The Cougars (7-5, 4-5) converted four fourth down conversion in the first half to stay withing a point at halftime.

The Huskies picked up the second half where they left off with a 75-yard touchdown from Penix to Jalen McMillan – who had six catches for 150 yards and a touchdown – to take a 35-27 lead.

Washington State couldn’t answer and punted on its next possession.

The Cougars defense finally came away with a stop, as Daiyan Henley forced a fumble on Cameron Davis.

Washington State scored nine plays later with a chance to tie, but Ward errantly ran out of bounds without crossing the goal line on the 2-pt attempt.

It would be their only points of the half and the Huskies lead would stand until the end.

Rome Odunze scored another touchdown with 14:30 remaining in the fourth quarter, and after another Cougars punt, the Huskies put the game away with a 15-play field goal drive.

Wayne Taulapapa added insult to injury with a 40-yard touchdown run in the final two minutes.

Washington finished with 703 total yards and improved its rivalry series lead to 75-33-6.

‘It should scar them’: Washington State surrenders 700 yards, Washington separates in second half for 51-33 Apple Cup win

PULLMAN – In the week leading up to the Apple Cup, many presumed this edition of the rivalry game would feature a high-powered Washington passing game versus a stout Washington State defense. | Read more

Penix is 20 of 34 for 422 yards, three touchdowns and one interception.

2:28 – UW 35, WSU 33: Penix is intercepted by Langford in the endzone and the Cougars get a crucial takeaway. Huskies were threatening another touchdown drive.

6:30 – UW 35, WSU 33: Watson punches in a 4-yard touchdown to capitalize on the UW fumble. 2-pt conversion attempt is no good, as Ward had all the space to get into the endzone, but went out of bounds with the ball in his left arm shy of the goal line.

Penix comes out of halftime and launches a 75-yard touchdown to McMillan on the first play. We’ll see if the Cougars can continue to keep pace.

75-yard house call to start off the second half 💨

A sensational first half of the Apple Cup closed with eight-straight scoring drives between Washington and Washington State.

The Huskies take a one-point edge to the locker room, leading the Cougars 28-27, on a night neither defense can seem to do anything against the opposing quarterback.

UW’s Michael Penix Jr. is 13 of 22 for 242 yards and two touchdowns and has added two carries for 34 yards and two more scores. The Huskies have 326 total yards and are 6 of 7 on third down conversions.

WSU’s Cameron Ward is 18 of 33 for 193 yards nd two touchdowns. He has five carries for 21 yards and another score. The Cougars have 304 total yards and while 3 of 9 on third down, have converted all four of their fourth down tries.

It’s shaping up to be a classic in the rivalry series’ 114th installment.

The Cougars will need to avoid a let down in the second half, where they’ve struggled to score points in recent weeks.

Washington will receive the second half kickoff.

1:40 – UW 28, WSU 24: SEVEN straight touchdown drives between the two teams as Penix runs in a 4-yard score to retake the lead.

@themikepenix is bringing the heat 🔥🔥🔥

5:07 – WSU 24, UW 21: Ward completes a 15-yard pass to Watson for the touchdown after converting its fourth 4th down conversion of the half.

Cougars playing like they can ill-afford an empty possession. It’s paying off so far.

McMillan tosses a swing pass back to Penix, who runs it 30 yards for a touchdown. WSU and UW have traded four touchdowns in the past six minutes of game time.

Ward throws three straight incompletions, but finds his man on 4th down, as Ferrel takes in a 34-yard touchdown.

Cam Ward extends the play and finds Ferrell for a 34-yard TD. pic.twitter.com/SgecHHzMqv

13:27 – UW 14, WSU 10: Penix throws a perfect deep ball to Odunze, who catches it in stride and strolls in for a 47-yard touchdown to regain the lead. Huskies showing why they have the nation’s top passing and 3rd down offense on consecutive plays.

13:35 – WSU 10, UW 7: Penix picks up a big 3rd down conversion with a 19-yard pass to Jackson. Huskies near midfield when play resumes out of the TV timeout.

The Cougars converted two 4th down plays en route to the score.

#WSU QB Cameron Ward evades a few tacklers, scurries in from 14 out.
Cougs go up 10-7 against #UW with just under a minute left in the opening quarter. pic.twitter.com/4ZwvicRZep

Huskies capitalize on the short field position with a 4-play 44-yard drive. Penix is 5 of 10 for 61 yards.

7:00 – WSU 3, UW 0: Ward somehow escapes a safety on third down, but his pass falls incomplete and the Cougars punt.

8:11 – WSU 3, UW 0: Huskies drive doesn’t result in points after a holding penalty, but McCallister pins WSU deep on its own 2.

12:18 – WSU 3, UW 0: The Cougars march down the field, thanks to a 20-yard run from Watson and a facemask penalty, and Janikowski sneaks a 50-yard field goal through after it bounces off the crossbar.

Ward opens the game 1 of 4 for four yards. Cougars will need him to play well to keep pace with Penix Jr. and the Huskies offense.

A Janikowski doink to get the scoring started for the Cougs.

Pregame scene in Pullman.
Apple Cup about to kick off. pic.twitter.com/oHEjLTaPFY

Gonzaga Prep graduate Armani Marsh, who had two interceptions and a touchdown for Washington State in last year’s Apple Cup, is not suited up during warmups and is wearing sweat pants.

Cougars’ wide receiver Renard Bell is not active. Safety Jordan Lee is active in warmups after missing the last three games with an injury.

If history is any indicator, it’s rare for Washington State to win the Apple Cup, let alone retain it for consecutive years.

The Cougars will hope coach Jake Dickert can turn the tide in this rivalry series.

Washington State hosts No. 12 Washington tonight at 7 p.m., a year removed from beating the Huskies 40-13 for its first Apple Cup win since 2012. The game will be broadcast on ESPN.

Dickert was promoted from interim to head coach after last year’s rout of the Huskies. A win tonight and he would become the first in Cougars history to win his first two Apple Cups.

On the other side, Washington coach Kalen DeBoar looks to earn a win in his first Apple Cup. DeBoar has led the resurgent Huskies to a 9-2, 6-2 Pac-12 record and are riding a five-game winning streak.

Meanwhile, the Cougars (7-4, 4-4) have won three straight, but are 0-4 against teams ranked in the AP top 25. Washington State did beat then-No. 19 Wisconsin in Week 2, but the Badgers haven’t returned to the rankings.

Washington enters the game as a 2-point favorite.

Cougs arrive ahead of the 🍎 🏆 pic.twitter.com/7XLYQBqeHM

‘This is not just another game’: Washington State plays to retain Apple Cup against No. 12 Washington

Two-minute drill: Keys to victory for Washington State against No. 12 Washington

The pick: Why Washington State will beat No. 12 Washington

PULLMAN – Washington State is taking a new approach to its rivalry series with Washington. | Read more

Commentary: Cougars, Huskies can choose their own adventure at this year’s Apple Cup

MARRAKECH, Morocco – Look to your left and read the dateline, dear readers. Does that look like the home of the Washington State Cougars? Through a bizarre mix-up at SeaTac International Airport, your intrepid columnist ended up on the wrong side of the Atlantic. | Read more

PULLMAN – In 2015, Armani Marsh and Sam Lockett III held down key roles in Gonzaga Prep’s secondary and boosted the Spokane program to a class 4A state championship. | Read more

It is time for an Apple Cup reset. The last whirlwind decade of the post-Thanksgiving rivalry games between Washington and Washington State has this columnist needing a smoke. | Read more