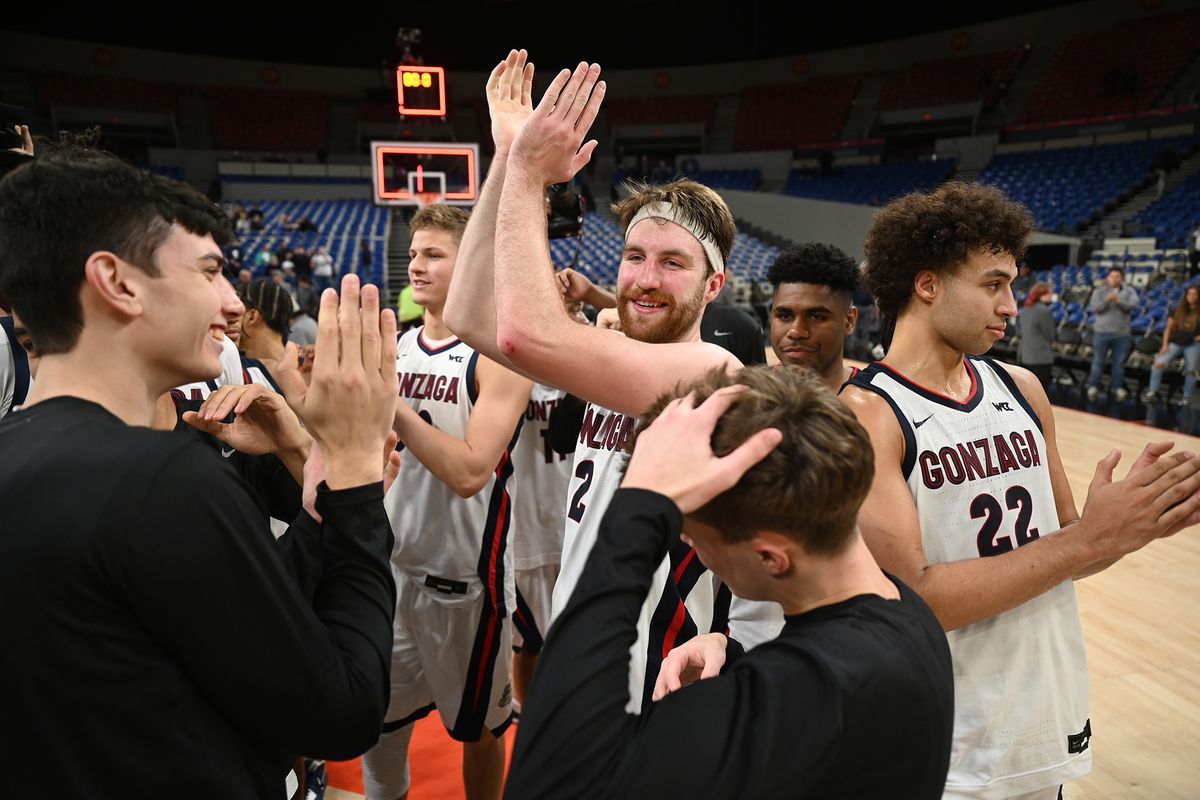 PORTLAND – Gonzaga allowed another team to hang around and take the lead in the second half.

The difference this time?

Julian Strawther made a pair of late 3-pointers as Gonzaga surged to a 88-84 win over Xavier for third place at the Phil Knight Legacy tournament.

Rasir Bolton and Nolan Hickman answered with back-to-back 3s and Drew Timme tied it at 71 with a pair of free throws.

Xaiver retook the lead with 3:46 remaining, then came Strawther’s 3s to put the Zags in front for good.

Strawther finished with a team high 23 points and made five 3s on eight attempts.

Drew Timme added 18 points, but was far from his usual self, committing seven turnovers.

Gonzaga will undoubtedly take a tumble in Monday’s AP top 25 poll ahead of Friday’s meeting with No. 7 Baylor (5-1).

That game will stream exclusively on Peacock at 5 p.m.

On a night that was the ultimate rollercoaster ride for Gonzaga’s Drew Timme, teammate Julian Strawther made sure a turbulent 40 minutes of basketball arrived in the win column. | Read more

18:31 – GU 3, XU 2: Strawther gets the Zags on the board with a 3-pointer and play is stopped so Timme can put his shoe back on after it fell off on an earlier play.

Watson seals off his defender and Timme sees the tiny windows to sneak a pass down to him.

Watson with an easy dunk. pic.twitter.com/FUzbzRfsWn

11:27 – GU 16, XU 6: Xavier finally gets some points on a layup from Nunge, who will shoot a free throw when play returns from the U12 media timeout.

Musketeers start 2 of 13 from the field. Zags spreading the ball around with six assists on their seven baskets and five different scorers.

Gonzaga racking up turnovers and fouls now, up to five and six, respectively.

Watson tips it away to Bolton who find Strawther on the other end for the alley-oop.

Fun to watch Strawther with his approach, readying himself for the pass above the rim. pic.twitter.com/snq1HZ3Yvx

2:54 – GU 37, XU 30: Both teams trading baskets and misses and a good pace when Timme commits his second turnover of the game to reach the U4 media timeout.

Fairly even half with the Zags making six 3-pointers to Xavier’s three leading to the edge. Timme just 2 of 7 from the field.

Gonzaga started strong, jumping out to a 10 point lead over Xavier, but got sloppy with the ball and let the Musketeers get back into the game and settled for a 40-34 lead at halftime.

Ben Gregg ended the half on a high note, coming in off the bench in place of turnover-prone Drew Timme, and making a 3-pointer a couple second before the buzzer.

Anton Watson leads seven Gonzaga scorers with 10 points. The Zags are shooting 46.9% from the field and are 7 of 14 on 3-pointers.

Xavier started just 2 of 13 from the field, but settled in for a 41.2 shooting percentage. Zac Freemantle leads Musketeer scorers with 10 points.

9:17 – XU 62, GU 61: Nunge steals it from Timme – his sixth turnover – and makes a layup on the other end to give Xavier its first lead of the game. Gonzaga calls for a timeout.

Nunge has been the best player on the floor with 25 points on 11 of 16 shooting and six rebounds.

Gonzaga has been hit-or-miss through its first six games.

The No. 6 Bulldogs (4-2) are bound for another tumble in the top 25 rankings following a loss to Purdue on Friday, but much like its first loss to Texas, has a chance at redemption and will face Xavier at 4:30 p.m. The game will be broadcast on ESPN.

The Musketeers (4-2) and Zags will play for third place in the Phil Knight Legacy tournament. Xavier lost to No. 8 Duke in the semifinal 71-64.

Things won’t get easier for Gonzaga with a trip to Sioux Falls to play No. 7 Baylor coming Friday.

Gonzaga holds a 4-1 all-time series lead over Xavier, winning the past four meetings since 2006. The Musketeers lone win came during the 1960-61 season.

PORTLAND – Gonzaga’s breakdowns were widespread in Friday’s loss, from the 27.5% shooting from players not named Drew Timme or Nolan Hickman to a defense that “got torched,” in the words of coach Mark Few, in the second half. | Read more

Key matchup: Xavier senior guard Souley Boum, Gonzaga have seen each other before

Souley Boum first occupied the key matchup space against Gonzaga on Jan. 13, 2018, when he was 6-feet-3, 145 pounds and wearing San Francisco’s green and gold. The Oakland native makes a repeat appearance nearly five years later, 30 pounds heavier, a proven scorer and one of college basketball’s most experienced guards. | Read more

PORTLAND – Gonzaga’s first 48 hours at the Phil Knight Legacy came with a mixed bag of emotions. It will take another 40 minutes to determine if the program’s second trip to the Portland-based tournament celebrating Nike co-founder Phil Knight is ultimately deemed a success or failure. | Read more

PORTLAND – They quelled their turnover issues. They threw the first punch, racing out to an eight-point lead less than 5 minutes in. They got another 20-point outing from Drew Timme, season-high production from Nolan Hickman and late shot-making from reserve forward Ben Gregg. | Read more

For most of the night, Gonzaga leaned heavily on Drew Timme and Nolan Hickman at the offensive end. The pair finally got some help from an unexpected source when Ben Gregg, who played at nearby Clackamas High School, provided a second-half spark in the Zags’ 84-66 loss to Purdue in the semifinals of the Phil Knight Legacy tournament. | Read more