A GRIP ON SPORTS • The defense was leaky. The offensive line was overpowered more than a few times. The quarterback play was spotty. And yet, if the Seattle Seahawks had just gotten one break, had one 50/50 call go their way down the stretch, they would have eked out a win Sunday.

• They didn’t. And they lost by the improbable score of 40-34 in overtime. To the Raiders, a team with nothing to play for in the grand scheme of the whole NFL playoff thing. 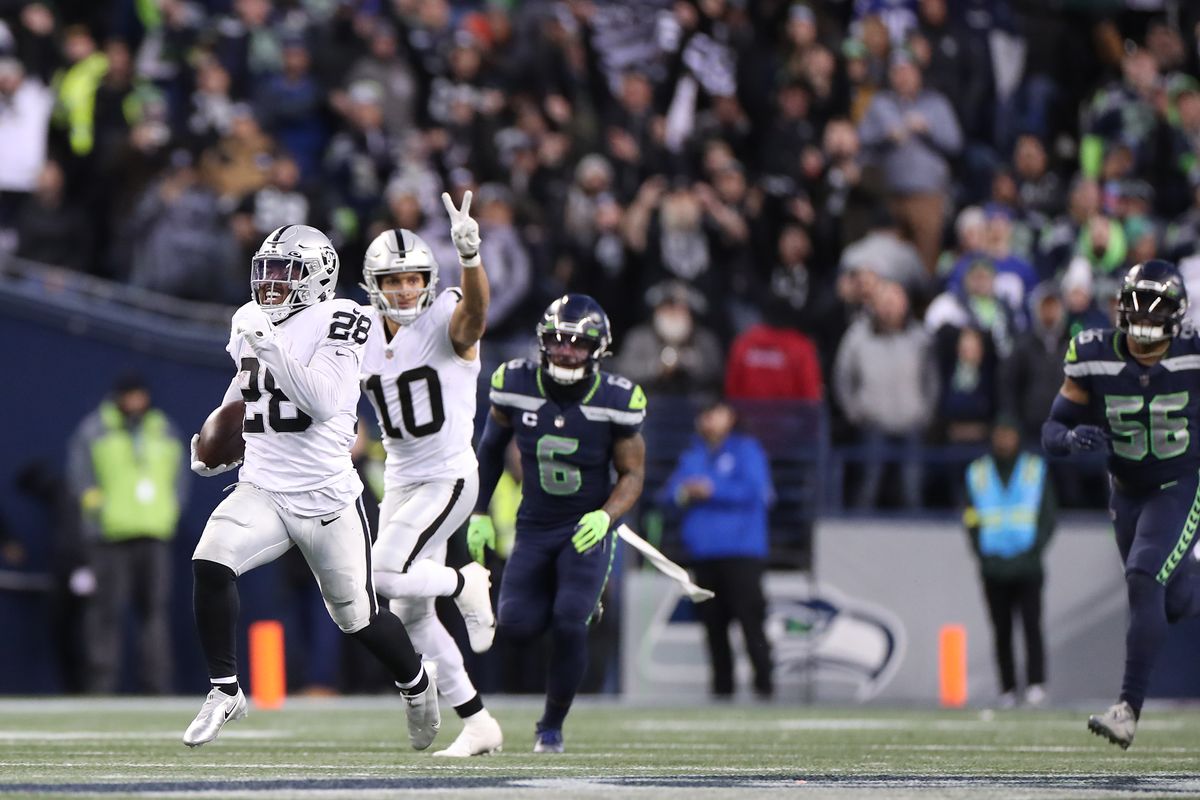 Not just Seahawk fans, who are probably still wondering how a late fumble wasn’t a fumble or how it takes six minutes to be convinced a key catch wasn’t a catch. But the Seahawks themselves, a group that has watched their last two games turn on their inability to get stops when needed. Or be able to run the ball with the consistency that marked their four-game winning streak.

Las Vegas was the better team at the line of scrimmage. Yep, you read that right. The team that came in 3-7, had looked horrendous in the first part of the season, dominated up front. On both sides of the ball.

The Hawks couldn’t win a 1-on-1 battles consistently, either on defense – the holes running back Josh Jacobs sprinted through were stunning, including on the game’s final play – or on offense – Abe Lucas has been special this season but the rookie tackle, who wasn’t expected to play due to an illness, looked less-than-ordinary against Maxx Crosby.

Those two elements were missing Sunday. Without them, the Hawks are going to struggle. It may be somewhat surprising, then, they were still in the game near the end of regulation. When a call here or there would have made the difference. None broke their way. And their season broke a little more.

• Speaking of breaks, Gonzaga made its own down the stretch Sunday its 88-84 win over Xavier in the Phil Knight Legacy tournament.

Well, the Zags made shots. Put together a 20-4 run in crunch time to take the lead heading into the final minute and then survived a couple of poor decisions and missed free throws to secure the win. 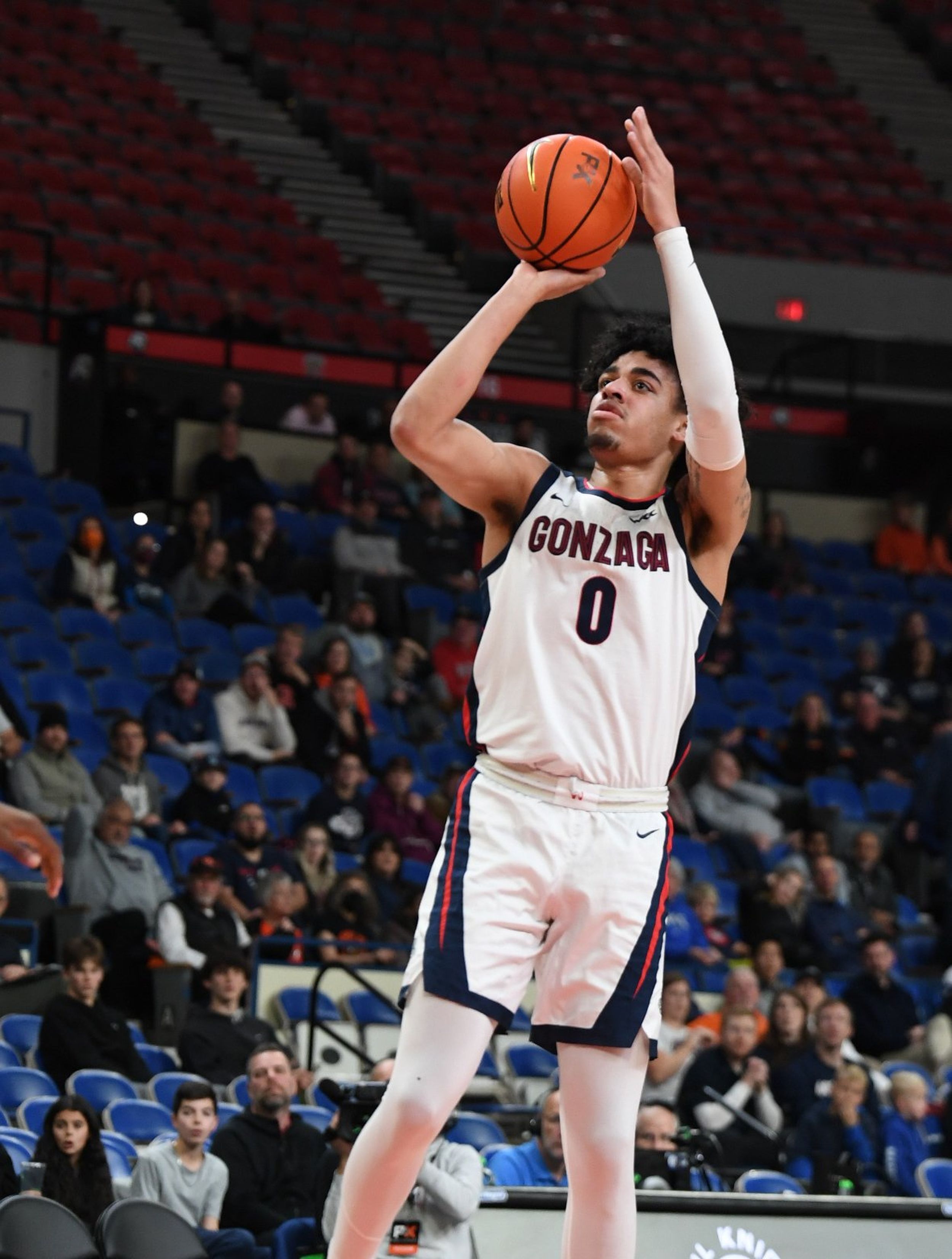 Thank Julian Strawther for the impetus – and the big shots. His long 3-pointers keyed the run and he finished off the Musketeers with two game-clinching free throws in the final seconds. He finished with 23 points.

But the win, GU’s second in Portland, masked at least one issue.

The bench was almost non-existent in this one. The starters scored 82 of the Bulldogs’ 88 points. Ben Gregg, who was barely a part of the rotation heading to Portland, played the most minutes off the bench with 13. He had three points – a 3-pointer – and six rebounds. Hunter Sallis added a 3-pointer in 7 minutes. Malachi Smith played 8 and Efton Reid was on the floor for 1. That’s 29 out of a possible 200 minutes.

It didn’t hurt Gonzaga against Xavier. But other tests are coming, starting with Baylor in South Dakota on Friday. So is foul trouble. The Zags need seven players, at times eight, they can count on.

The question is, who will fill those final two or three spots? 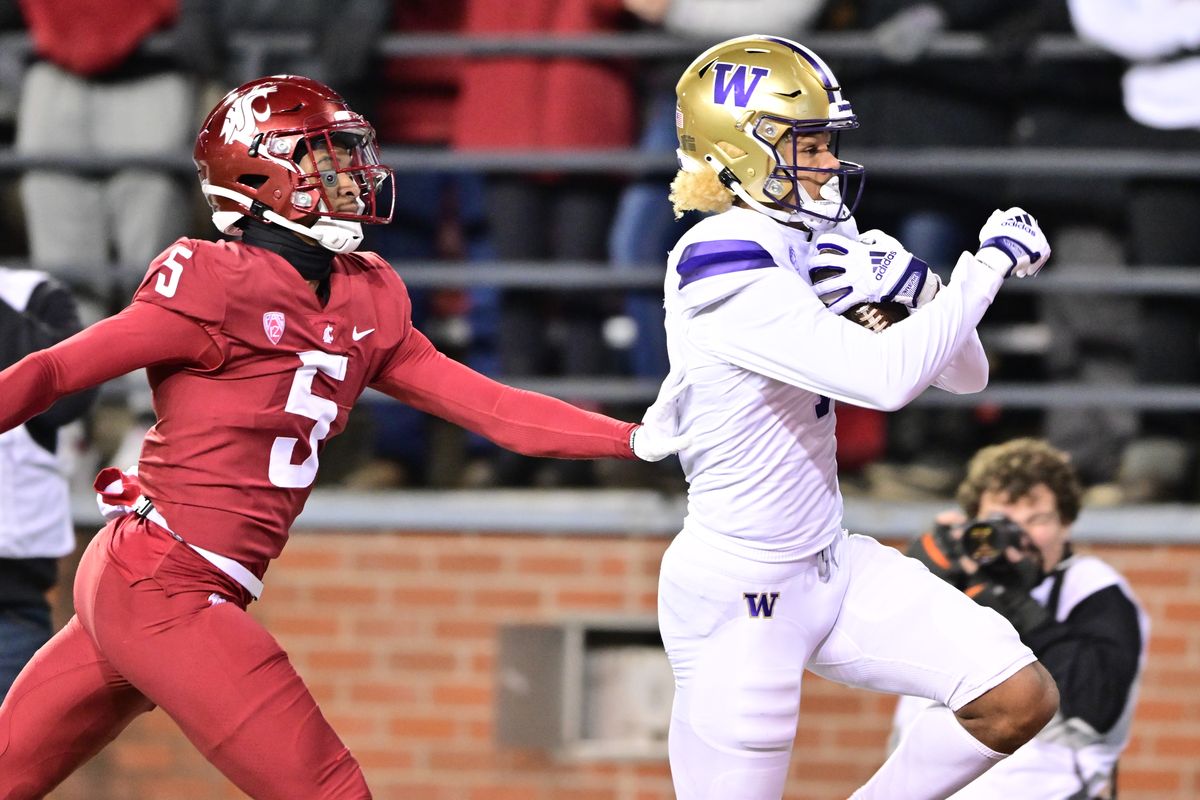 WSU: The Cougars lost five games this regular season. All five were to top-25 teams. All in conference. But it’s the last one, the one in which Washington ran over the defense to the tune of 703 yards, folks may remember. The Huskies gained 10.5 yard, on average, every time they snapped the ball. Colton Clark has more in this notebook. … Elsewhere in the Pac-12 and college football, Jon Wilner takes a look back at the momentous happenings of the weekend and there were quite a few. … One was David Shaw stepping down at Stanford. … Another was Arizona State hiring a new coach, Kenny Dillingham. He was introduced yesterday. … Washington’s offense is something special and may be featured in the Rose Bowl. … But that will only happen if USC can get past Utah in Friday’s conference title game in Las Vegas. That result would more-than-likely send the Trojans to the CFP. Utah is happy to be in the title game and has the advantage of knowing it has already defeated USC. … UCLA and its leaky defense is going bowling again, though not to one of the fancier locations. … Is Oregon State coach Jonathan Smith headed to a postseason award? He was quite diplomatic about a couple marks in the Oregon game. … The Ducks’ loss to the Beavers knocked them down the polls. … Colorado’s season is done. … In basketball news, Colorado held off Yale to pick up a needed win. … UCLA was a bit shorthanded but won anyway. … Oregon was really shorthanded but it won as well. … Arizona State defeated Alcorn State. … Stanford lost to Memphis. 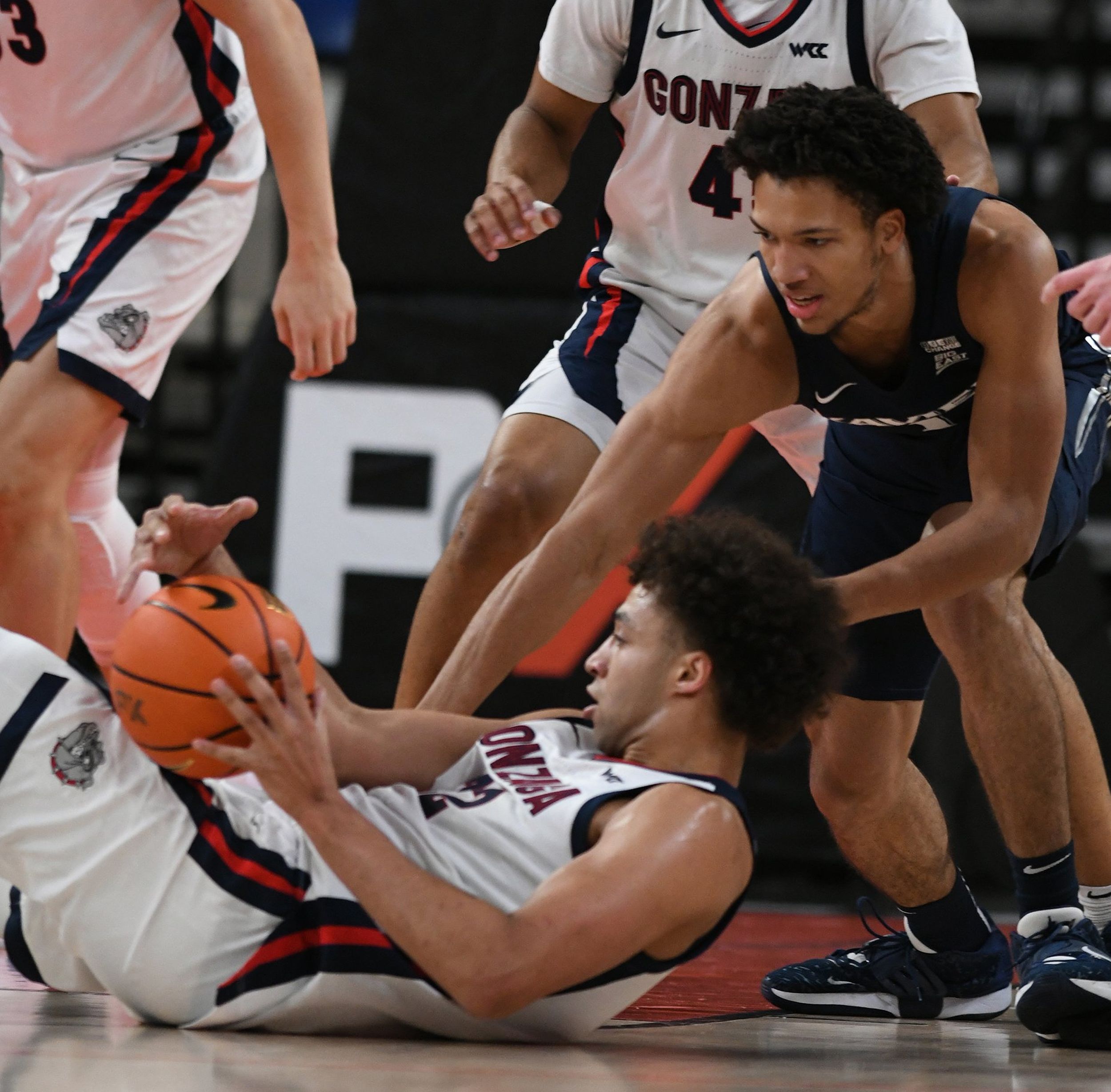 Gonzaga: Jim Meehan has the game story from Portland. … Theo Lawson has the difference makers and a story on Nolan Hickman’s week. … Jesse Tinsley has the photo gallery. … The folks in the office put together the recap with highlights. … The women are scheduled to host Maine tonight in the Kennel. There is still no official reason except the nebulous health and safety protocols why Saturday’s game with Eastern was postponed. Jim Allen has a preview of tonight’s game. … Elsewhere in the WCC, Portland gave Michigan State another battle.

Chiefs: Everett pounded the Spokane net and left the Arena with an 8-3 victory. Kevin Dudley has the story. 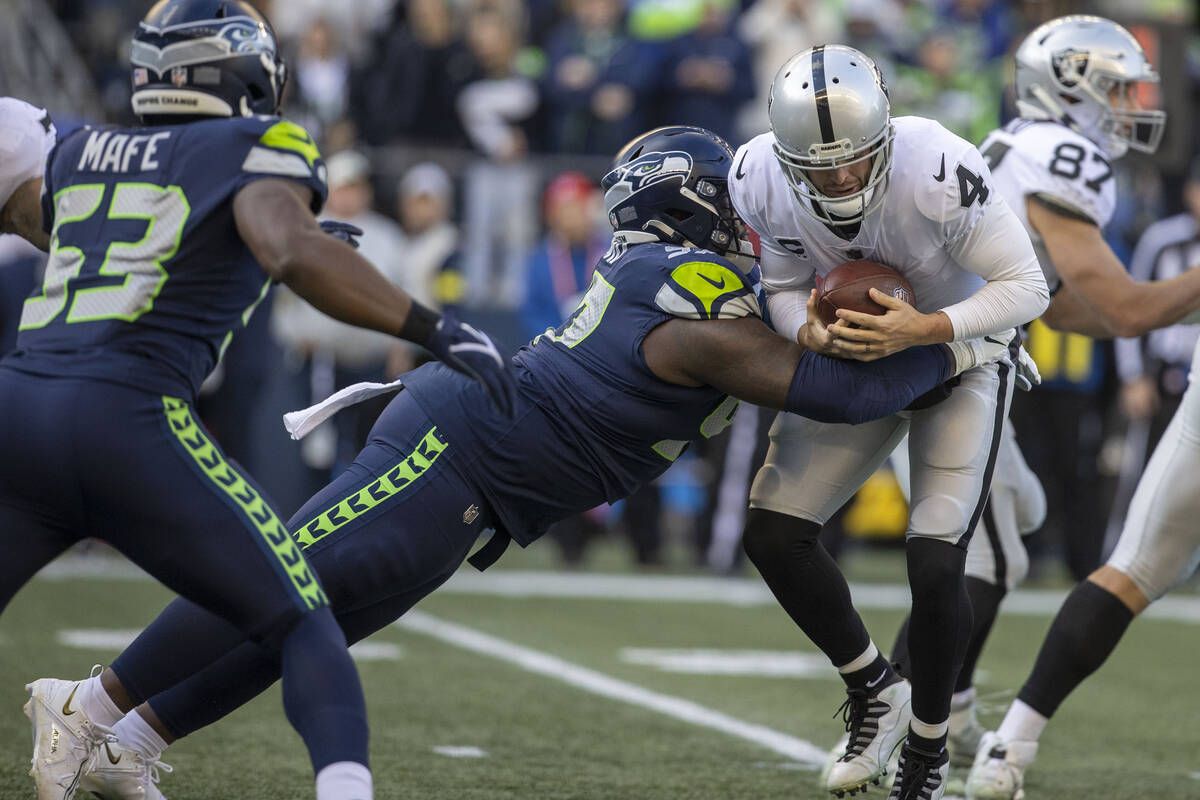 Seahawks: Dave Boling was at Lumen Field and has this column about the Hawks’ disappointing loss. … Seattle led 7-0 28 seconds into this one. The rest of the game wasn’t nearly as positive for the home team. Especially for the defense. … A late review, which took at least 6 minutes, went against the Hawks. … There are always grades. The rush defense had to have earned an F.

Kraken: Despite leaking a bit on defense, Seattle won again on the road, this time in Anaheim. The Kraken have won five consecutive games. And they are piling up points.

• It looks as if we could have some issues with the weather this week. Great. At least there will be a decent amount of sporting events to watch. Until later …