A GRIP ON SPORTS • Lately, every time we’ve seen one of those you-have-to-be-born-before-this-date signs in a liquor store, we’ve felt the Mariners were, subliminally, being mocked. After all, people born back in 2001 have never experienced a postseason playoff game with the M’s. Now they will.

• We all will. The 21-year drought will be drenched next week. Drenched like anyone who had the courage to venture into the Seattle locker room after last night’s 2-1 win over the Oakland A’s.

When Cal Raleigh’s high fly ball down the right-field line exited T-Mobile, we watched one life-long Mariner fan rise to his feet, throw his right hand in the air and celebrate as if he himself had played a role. 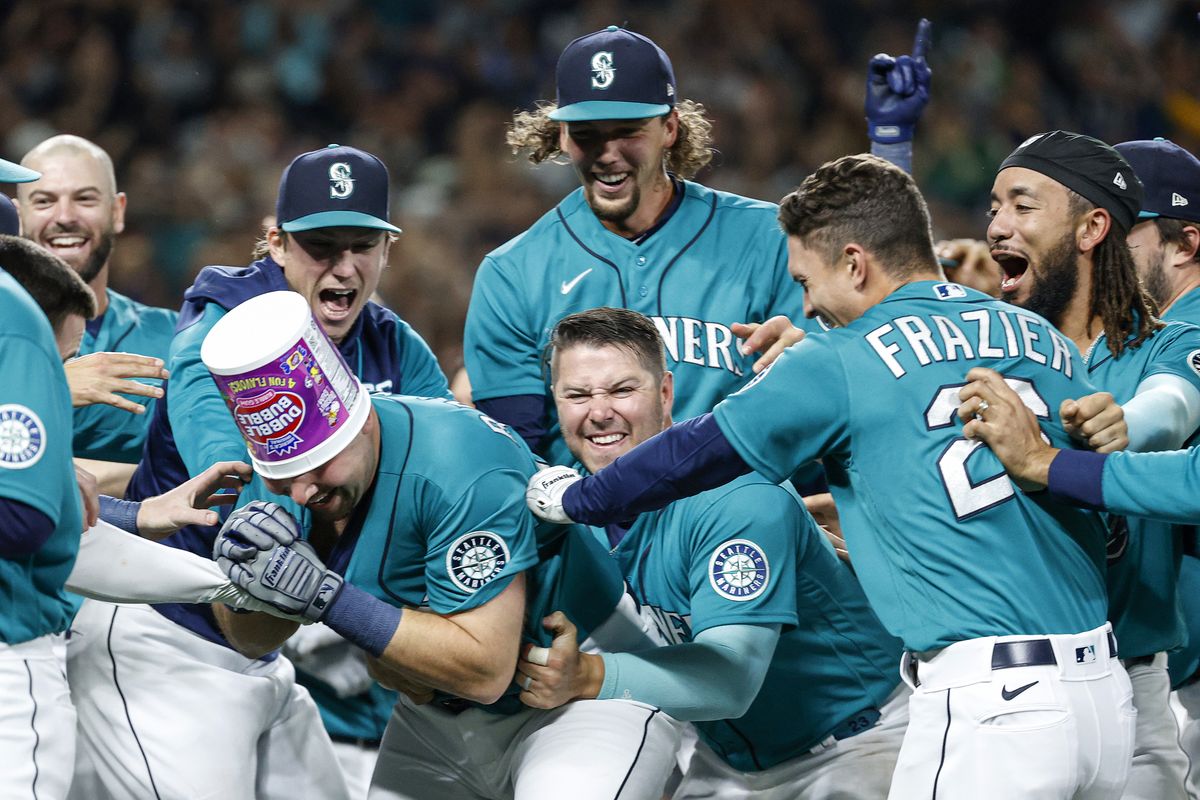 And, in a sublime way, he was right.

The players on the field are the ones who make it happen. That’s a given. But the players are invested in one season or two. They work in a profession that rarely allows long-term ties anymore. The band of brothers they bond with is guaranteed to be different in the not-so-distance future.

Fans? They mainly are invested for life. No one connected to this Mariner team, the one that ended the years of futility, has been in Seattle all that long. None have watched, year after year, as the M’s found grotesque ways to lose. Not a single guy in that dugout was around for the 100-loss teams, the good-enough-to-come-up-just-short squads, the we-don’t-look-like-we-care groups.

But you know who has? Yes, you do. Because they are you.

We know a lot of you. Leslie Kelly. Scott Ward. Neil Stover. Jim Kershner. And more than we can list here. Fans who cheered the M’s in 1995, 2001 and through the wandering-in-the-desert years. They endured. Grumbled, sure. But they endured.

One of them was sitting next to us last night. Our son Tyler. He may not have the passion for the game he once did, but still has a special place in his heart for Ken Griffey Jr.’s former team. Always will. He’s been watching the Mariners throughout the summer, convinced this was the team that would not break that heart. Convinced this was the team that would break the streak instead. He was right.

When Raleigh sat on Domingo Acevedo’s slider and lifted it toward right, he rose as well. It was almost as if the ball was pulling him into a spot he had not been since his youth. The postseason. Happiness. Success. Vindication.

We smiled. We know how important the baseball team of your youth can be. Their triumphs not only mean something in the moment but they take you back to when your love of the game was pure. Unsullied by the cynicism of adulthood. Untarnished by failure. Unblemished by the reality success on the field was a secondary concern for so many years.

The Mariners have always been really good at reveling in the past. Their fans have had to be exceptional at that as well. It was all they had. No more. Now they have a future. A future that makes them feel young once again.

That’s worth the price of admission.

• Ten minutes after Raleigh’s smile rounding the bases had faded, we began to calculate what’s ahead. Every team that makes baseball’s postseason feels it has a shot to win the World Series. Why wouldn’t they?

Finishing third in the wild-card race would be the toughest of the tough roads. Having to travel to Canada – more than likely – and win two-of-three from Toronto would be no fun. Better to win the final six games of the season and move up the standings. Be the host. Make Toronto or Tampa Bay beat you in Seattle to move on.

Last night was special. The next week will be too. Push to the finish. Make a run at moving up the playoff ladder. Then, next Friday, take a deep breath. And starting winning games. WSU: Last week’s disappointing loss to Oregon can’t be allowed to lead to a second-consecutive one this afternoon in Pullman. Not when the opponent is California, a school that scored just six points against the Cougs last season in Berkeley. Colton Clark has a preview of the game, the keys to its outcome and a prediction. We’ll be back on this site after it ends with our TV Take. The game is on the Pac-12 Network, with Roxy Bernstein and Lincoln Kennedy on the call. … The Bears will probably lean on freshman running back Jaydn Ott today. … Elsewhere in the Pac-12 and college football, Jon Wilner is always throwing out interesting ideas. His latest in the Mercury News, urging the conference to partner in as many ways as possible with Amazon, is beyond interesting. It could be game-changing. Or not. … Recruiting never stops. … The weekend began last night in the Rose Bowl, where 15th-ranked Washington handed UCLA its fifth win of the season – in five games. The Huskies were in self-destruct mode, fumbling away two points and throwing a couple of interceptions. The 40-32 final was a bit deceiving as the Bruins dominated the middle two quarters. … The best game of the day may be in Eugene, where Oregon will try to overcome another Stanford upset bid. The two have had some great matchups over the past decade, including last season. … Oregon State finishes a tough stretch with a game at Utah. The Utes will pose a lot of questions for the Beavers, who will try to answer. … Even Colorado’s president is weighing in on the football program. That is not good. The Buffs’ best chance for a win might be today against Arizona. The Wildcats are improved. … Sixth-ranked USC may be entering a trap against Arizona State, a team undergoing a transformation. … In basketball news, UCLA is getting back a player from ACL surgery. … Arizona unveiled its 2022 squad in the annual Red-Blue Game. Nothing matters more to the Wildcats than basketball.

Gonzaga: It is the same at GU. Basketball matters. Even preseason scrimmages, like the one the Bulldogs will have with Tennessee in Texas late this month, matters. Theo Lawson has that story. … Drew Timme, face (and voice) of college hoops. The senior post, like everyone and their aunt, is doing a podcast. Theo has that story as well. 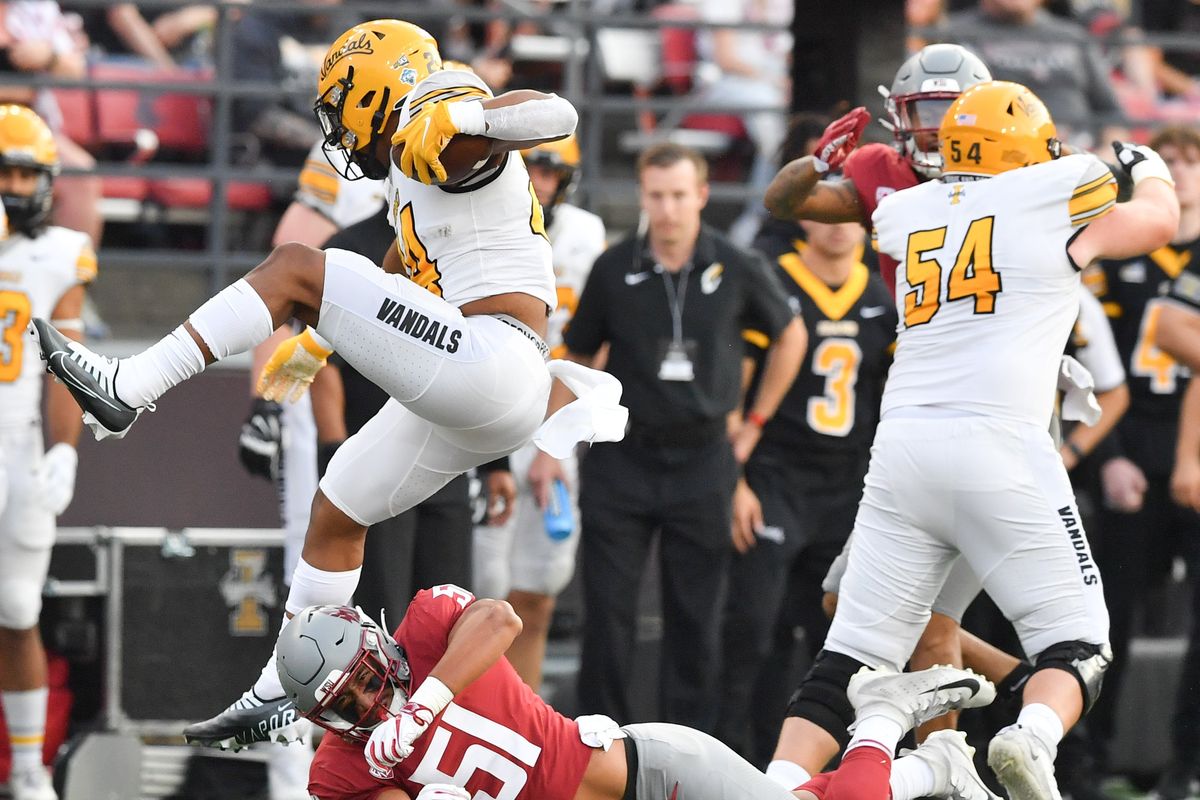 Idaho: The Vandals host Northern Colorado tonight. Peter Harriman has three things to watch. By the way, once again a Palouse football doubleheader is possible. WSU starts at 2:30 and the Vandals at 6. Think we may add that to our bucket list. … Elsewhere in the Big Sky, UC Davis might be in the midst of the toughest stretch. It plays at Montana State today. … Sacramento State might be the conference’s best team, though the Hornets can’t prove it today against Cal Poly. … Montana is the highest-ranked team. The Griz travel to winless Idaho State. … Northern Arizona faces off with Portland State.

Preps: West Valley won the battle of the Valley’s northern schools last night, topping East Valley 35-10. Steve Christilaw has the game story. … There were lots of other games last night and Dave Nichols has this roundup.

Mariners: Logan Gilbert had his longest outing of the season, eight one-run innings in the 2-1 clinching victory. … The magnitude of the accomplishment led to an outpouring of words, though none have more context than those of Larry Stone, who has been covering the M’s since Abner Doubleday retired. … Since returning from Tacoma, Jarred Kelenic has contributed in such a way he probably will be on the postseason roster. … It was also awards night at the ballpark.

Seahawks: The Hawks’ secondary has gotten healthy. Which may lead to some roster decisions. … Michael Dickson has memories of Detroit. … The Lions’ offense is dealing with a lot of injuries. … Boye Mafa wants to be on the field more.

• We’ve attended more Mariner games than we can remember. More than any other team’s as well. Most have been with our sons. It is our fault they are M’s fans. It’s just another thing we will have to explain when we get to the pearly gates. Though, hopefully, Saint Pete will give us purgatory credit for time served over the past 20 years. That would be nice. Until later …