It’s been a long journey, but a joyous one, for the marching band at Ridgeline High School.

It began last fall, when the new school opened in Liberty Lake. Everything in the $100 million building was new, from the microscopes in the science labs to the glistening floor of the gymnasium.

But when the marching band members met for their first practice in August 2021, instruments were scarce, there were no uniforms and the color guard twirled their flags on poles fashioned from PVC pipes.

“It was harder than I could have imagined,” said senior color guard captain Alayna Bell. 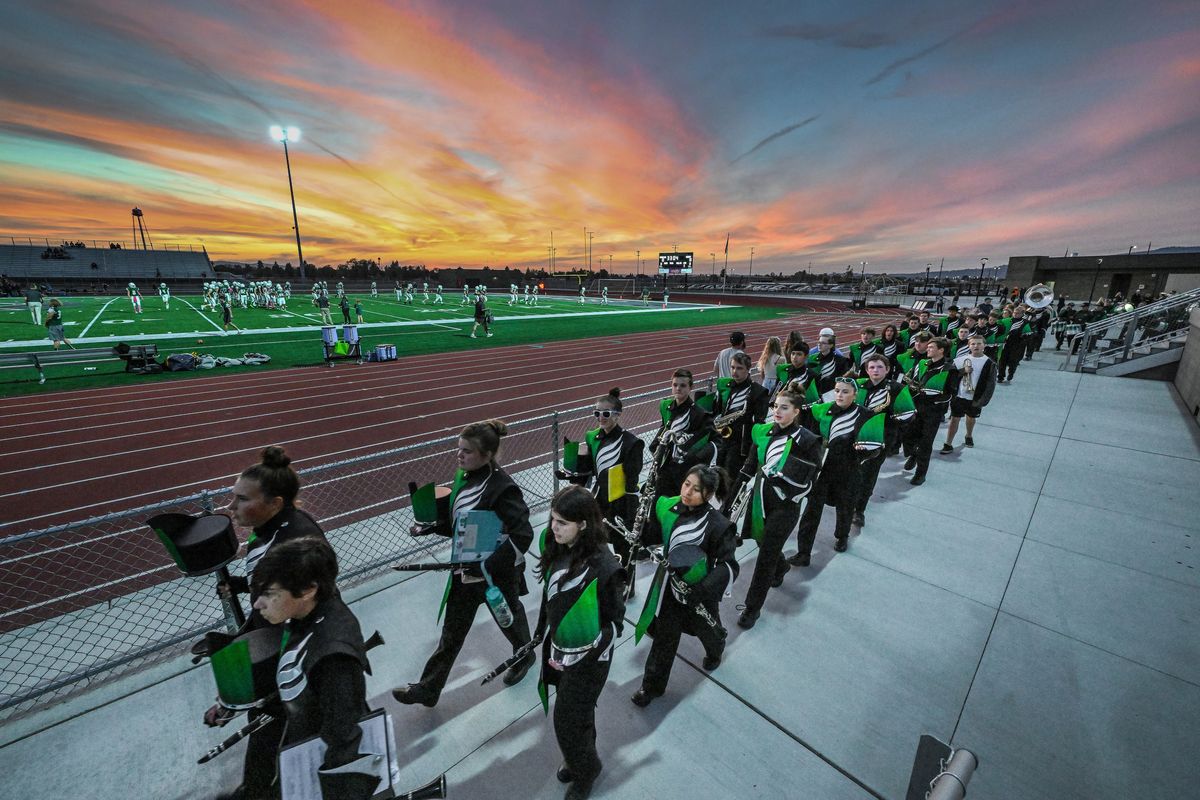 And yet a year later, Ridgeline is the top marching band in the Pacific Northwest. Earlier this month, the Ridgeline Regiment outperformed 15 other bands in a competition in Mead.

That was no fluke. A week earlier in Pasco, Ridgeline bested 17 other bands.

“There’s definitely something great about being recognized,” band director Eric Parker said this week. “Nothing succeeds like success, and a lot of people are talking about our band.”

But it isn’t about the trophies, said Sophia Jensen, a senior woodwinds captain. And in case sports fans weren’t sure, it also isn’t about performing at halftime.

For Jensen, competitions “are so cool because you get to see other high school bands doing the same thing you love. And seeing that energy and connecting with other bands, it’s cool to share your passion.”

Many probably felt that way in the late summer of 2021. Before Ridgeline opened, juniors who lived within the boundaries of the new school had the option of staying at their old high school or transferring.

The latter option meant parting with friends, and yet offered the chance to start something new. However, the interruptions of the pandemic made that decision a bit easier.

It also didn’t hurt that Parker and several other music teachers from Central Valley had opted to move to the new school. In fact, Parker – the band director at CV for 20 years – was part of a core group of faculty who switched to Ridgeline three years earlier.

“So we had a lot of time to think about things,” Parker said. “CV had a successful band program, so we brought a lot of institutional knowledge to Ridgeline.

Parker switched schools partly because his son would attend; also because of the challenge of “building a plane while you fly.”

Using that analogy, the band struggled to get off the ground. Instruments ordered months earlier didn’t arrive in time for the football season.

What followed was a harmonic convergence of sorts. Many band members had their own instruments, while other equipment was borrowed from other schools and institutions. The Ridgeline community also donated funds and goods.

“We borrowed almost everything,” Parker said. “But there were a lot of people who wanted to help us, because the marching band community isn’t competitive the way the sports are.”

“It’s nice to have all of our hard work pay off,” Bell said.

There’s more fun ahead. The band will miss the final home game of the year to compete in Portland, and at some point the baton will be passed.

“It’s cool to see how the juniors are coming into that leadership role,” Jensen said.