A GRIP ON SPORTS • Say you decided to build a house. You start one spring, put a lot of sweat equity into it throughout the summer but, despite your best efforts, you just can’t get it done as winter arrives. Do you quit? Or do you tarp everything, make sure nothing deteriorates and prepare to get back at the next spring?

• The latter, of course. Can’t waste all that time and effort. Besides, winter might not be a time to finish the laundry room or kitchen, but it’s a great time to find bargain deals on what could be big-ticket items come the summer.

And yes, this Thursday morning we decided to begin with an analogy. Pretty transparent, aren’t we? We’re talking about the Mariners. 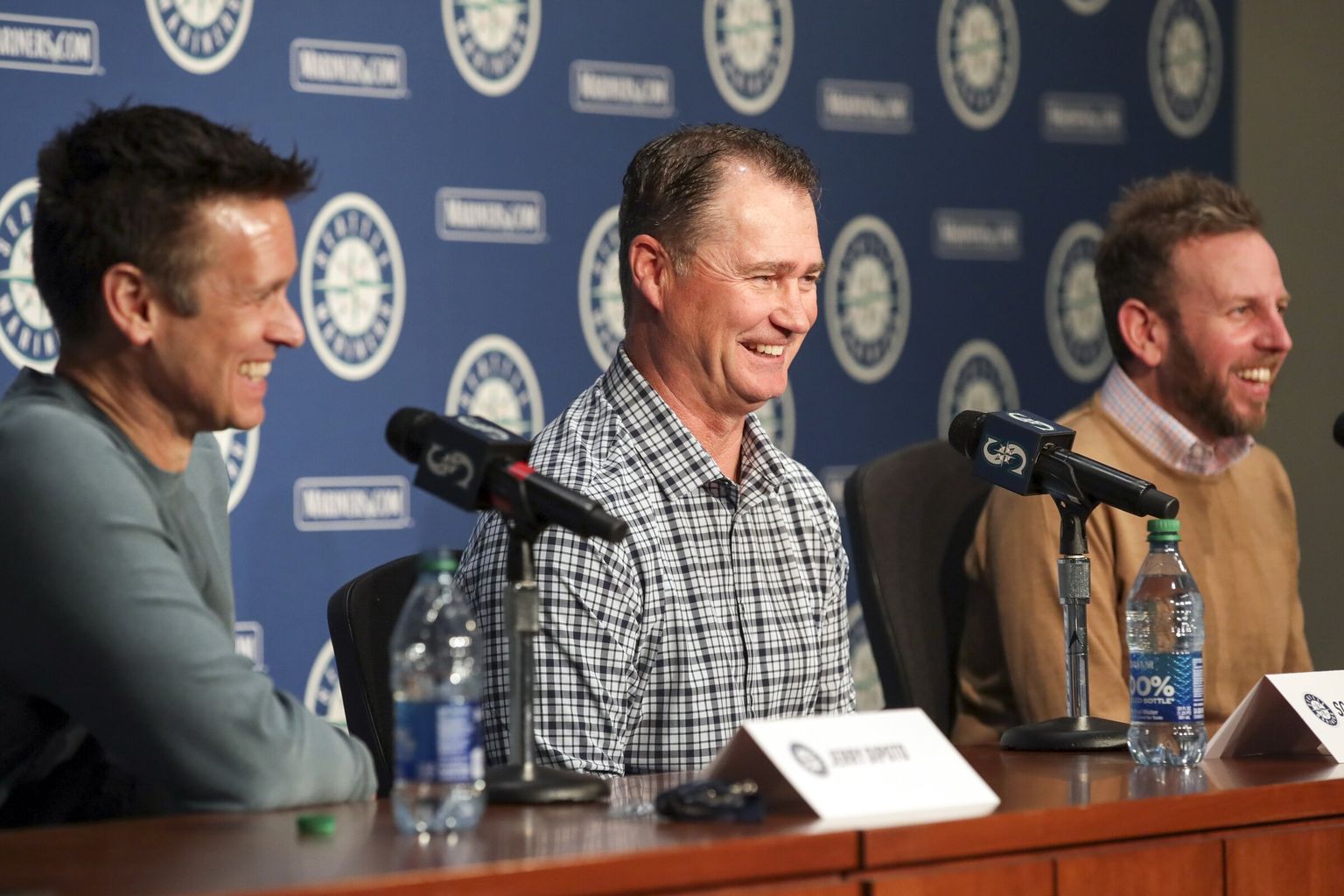 Hey, what did you expect, Shakespeare?

It would be a tragedy, of course, if the M’s don’t build on their 2022 success. If the organization doesn’t invest in the on-field product after getting so close to success this season. And though we’ve spent years laughing at the comedic way Seattle’s baseball franchise has been run in its recent history, we’re pretty sure this time the folks in charge will get it right.

More so today after reading everything we could on Wednesday’s end-of-season press conference.

Jerry Dipoto, Scott Servais, et al know what has to be done this winter. The process has started. To whit, laying the groundwork toward filling the potholes in the foundation.

Last offseason, Dipoto brought in Jesse Winker to fill a hole the organization has been unable to fix for decades. Left field, for some reason, is the M’s nightmare.

Winker couldn’t do it. The veteran left-handed hitter played the position like a deer on ice at times, swung the bat horribly and reportedly alienated teammates in the clubhouse. Other than that, he was great. 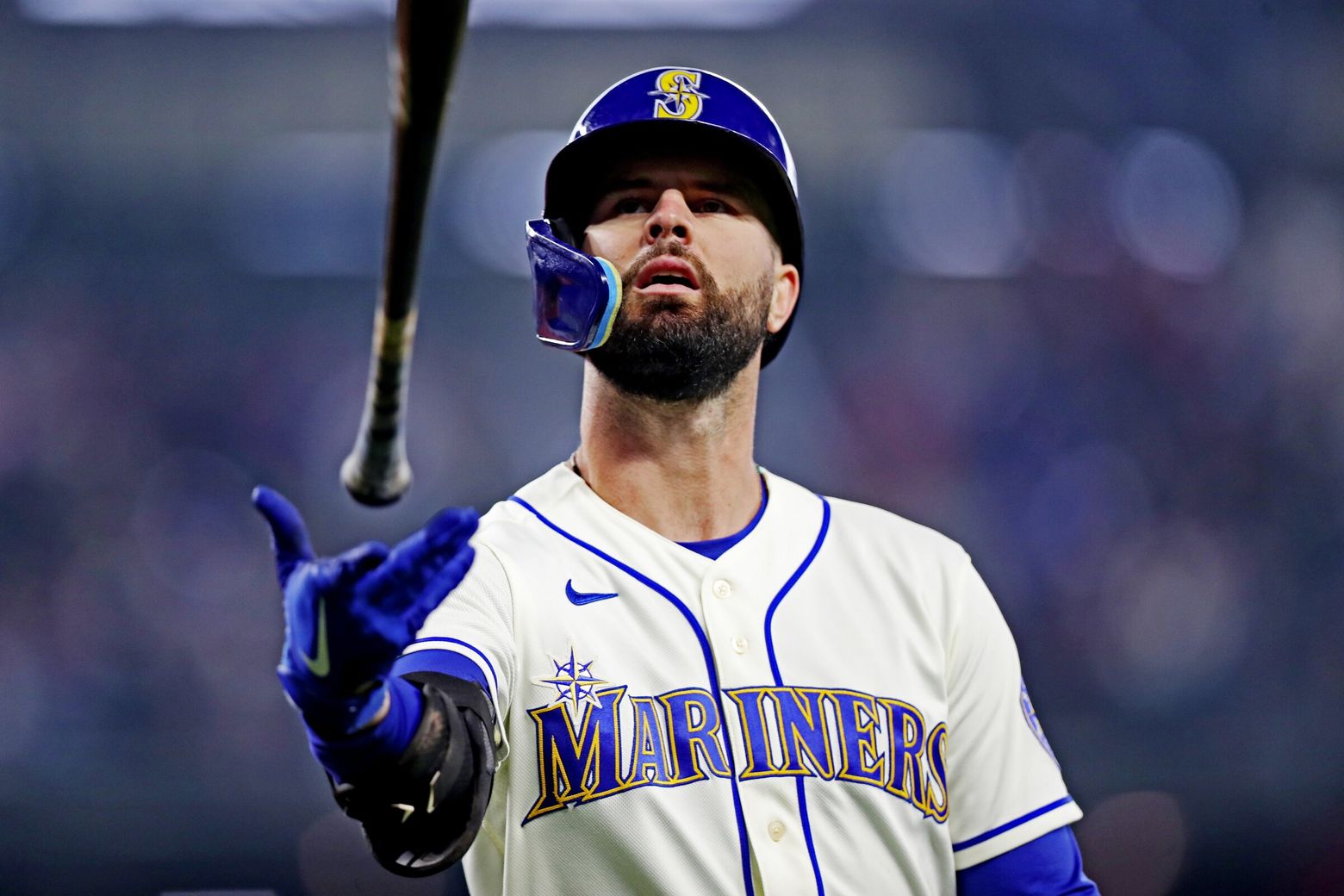 But Winker cost a lot of capital. Capital the M’s can’t afford to toss in the dumpster. So, yesterday Dipoto and Servais began rehabbing Winker’s reputation, revealing a previously undisclosed injury – or two. And disputing reports about Winker’s work ethic (or lack of). This helps in two ways. If the M’s decide to trade him, other organizations will have cover when the deal is made. Makes Winker more palatable. Or, if a deal doesn’t happen, it allows Winker to enter next spring with a fresh start, turning the narrative toward the injuries and not the poor play. Either is preferable to admitting a mistake was made and moving on with no recompense.

Remember, Winker signed a contract extension recently. As did J.P. Crawford. Last year at this time Crawford was locked in at shortstop. But the 27-year-old wasn’t the defensive whiz in 2022 he was previously. This offseason, the M’s aren’t as committed to keeping him at the infield’s most crucial defensive spot. At least it didn’t sound that way.

Everyone in Mariner fandom will peruse the free-agent lists from now until the end of the World Series. They will wonder just who the M’s will sign to fill their holes. (If rightfielder Mitch Haniger tries his chances on the open market, and it sounds as if he wants to, then that’s another spot to fill.) But that’s the wrong strategy for Seattle followers.

Instead, examine who might be available through a trade. That’s Dipoto’s preferred method. The Winker deal – or how it will be known heretofore, the Eugenio Suarez deal, being he was the throw-in who became the centerpiece – is a prime example of that.

Dipoto, the team’s president of baseball operations, and general manager Justin Hollander have pitching to deal. Starting pitching. Chris Flexen is under contract. He can fill a role. For someone else. He might help bring a second baseman in return (Adam Frazier, a free agent, won’t be back). Or there may be more of a need in rightfield. Or the bullpen.

No matter what, however, don’t expect Dipoto and the M’s to stand pat. The house isn’t done. There is more work to finish if there is ever going to be a reason to have asked the architect for a trophy room. 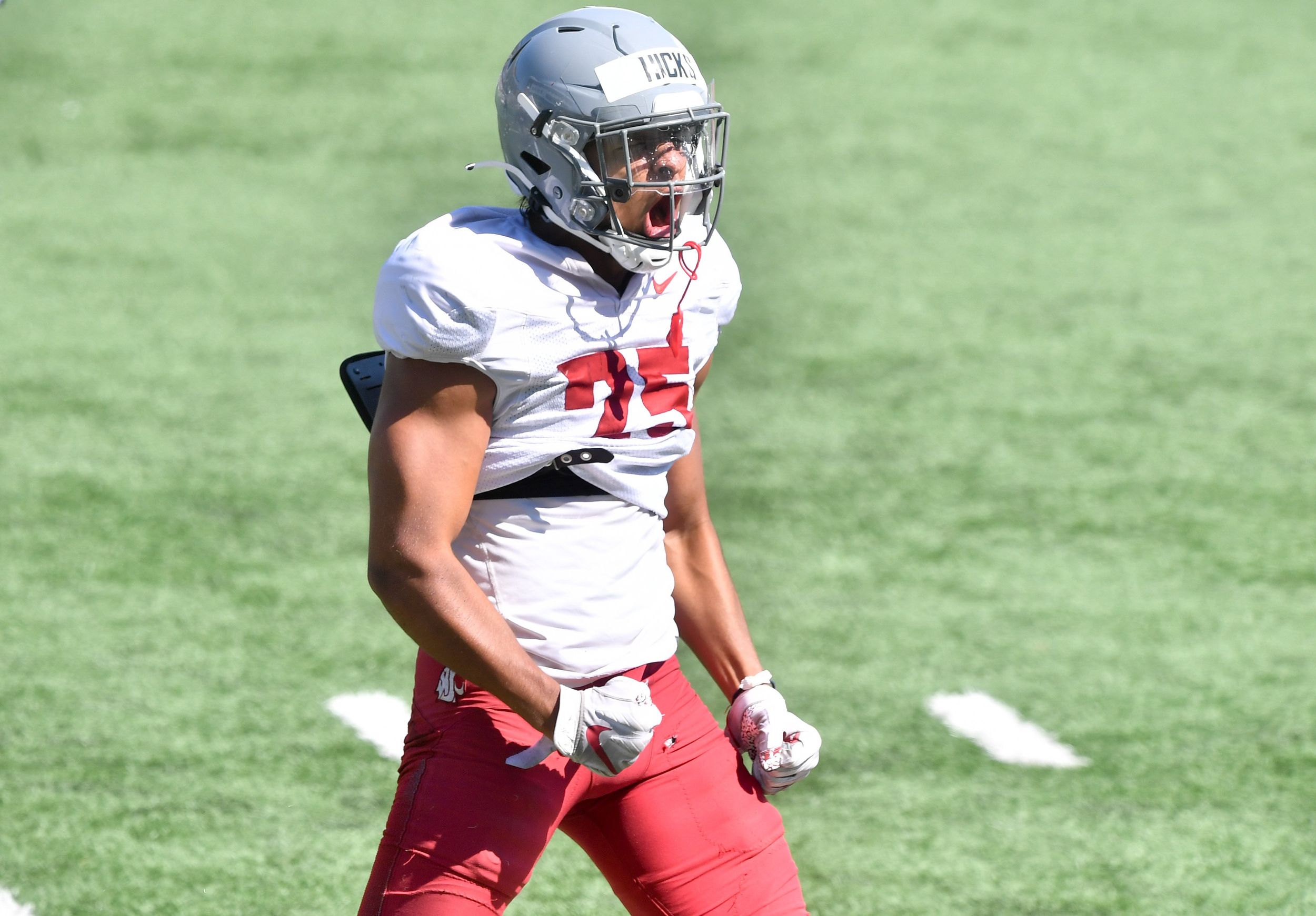 WSU: Another Cougar defender earned midseason honors yesterday. Colton Clark has this story on Jaden Hicks. … The transfer portal gets a bad rap, but this is the reason it needs to stay. Ahmir Crowder has fallen down the depth chart, wants to get on the field and, for whatever reason, won’t be in Pullman. Colton has this story on the defensive tackle looking elsewhere. … Charlisse Leger-Walker is back for the Cougars. And is back on the watch list for the most prestigious award in college women’s hoop. Jim Allen has more in this story. … Elsewhere in the Pac-12 and college football, Jon Wilner’s power rankings appeared in the S-R today. … His picks for the week, his best-in-the-west rankings and his interview with SEC commissioner Greg Sankey were in the Mercury News. … John Canzano joined Wilner on the podcast interview. He also has thoughts on Chip Kelly’s return to Eugene. That game, pitting the ninth-ranked Bruins against the 10th-ranked Ducks, is the best one this Saturday. Oregon is favored – and Wilner’s best bet – but UCLA has some weapons. After a smoky week, rain is in the forecast. … Washington goes on the road – uh oh – to play a California team coming off an awful loss. … Oregon State, thanks to its defense, is a big favorite to handle Colorado. But the Buffs played better last week. … Utah’s bye gives Kyle Whittingham time to stew about the end of the USC game. … Stanford could be on a two-game winning streak. Maybe after playing Arizona State this week? … The Arizona defense is pretty bad. … In basketball news, Colorado can’t afford any injuries right now. … Strength gains in the offseason has given one Arizona player more confidence.

Gonzaga: Which GU player will be the most improved this season? Jim Meehan asked and got a whole bunch of different answers from players. Which means, of course, there is once again a lot of depth at Gonzaga. … Julian Strawther is the consensus pick nationally to make that leap. … Elsewhere in the WCC, expect to see a bit different looking BYU team this season. 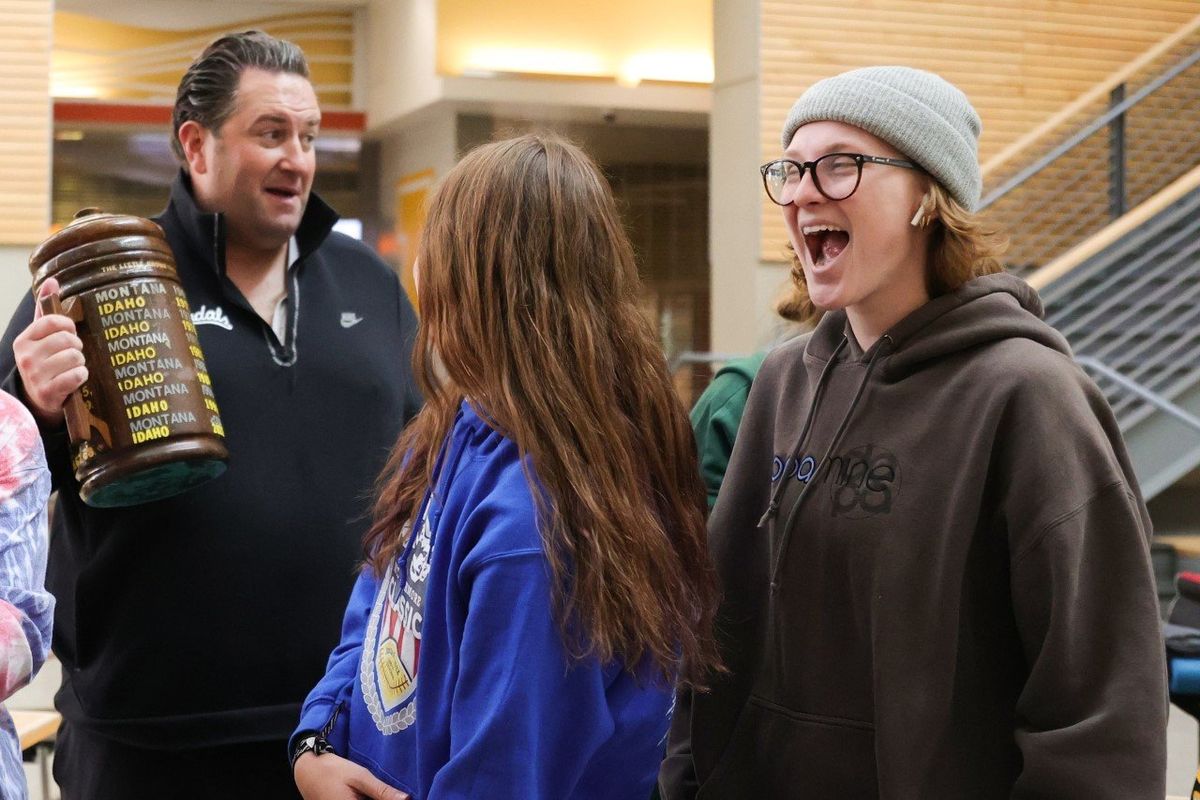 Idaho: We mentioned yesterday one of the things we learned about the Vandals following their rivalry win over Montana. Peter Harriman illustrates that point in this story today. Yep, Jason Eck loves traveling trophies. … Around the Big Sky, Sacramento State has some deep Montana roots. And expects to win the conference title. … What happens in practice shows up in Montana State games. … UC Davis is better than its record. Northern Colorado knows that. … In basketball news, Montana State worked in the weight room in the offseason. 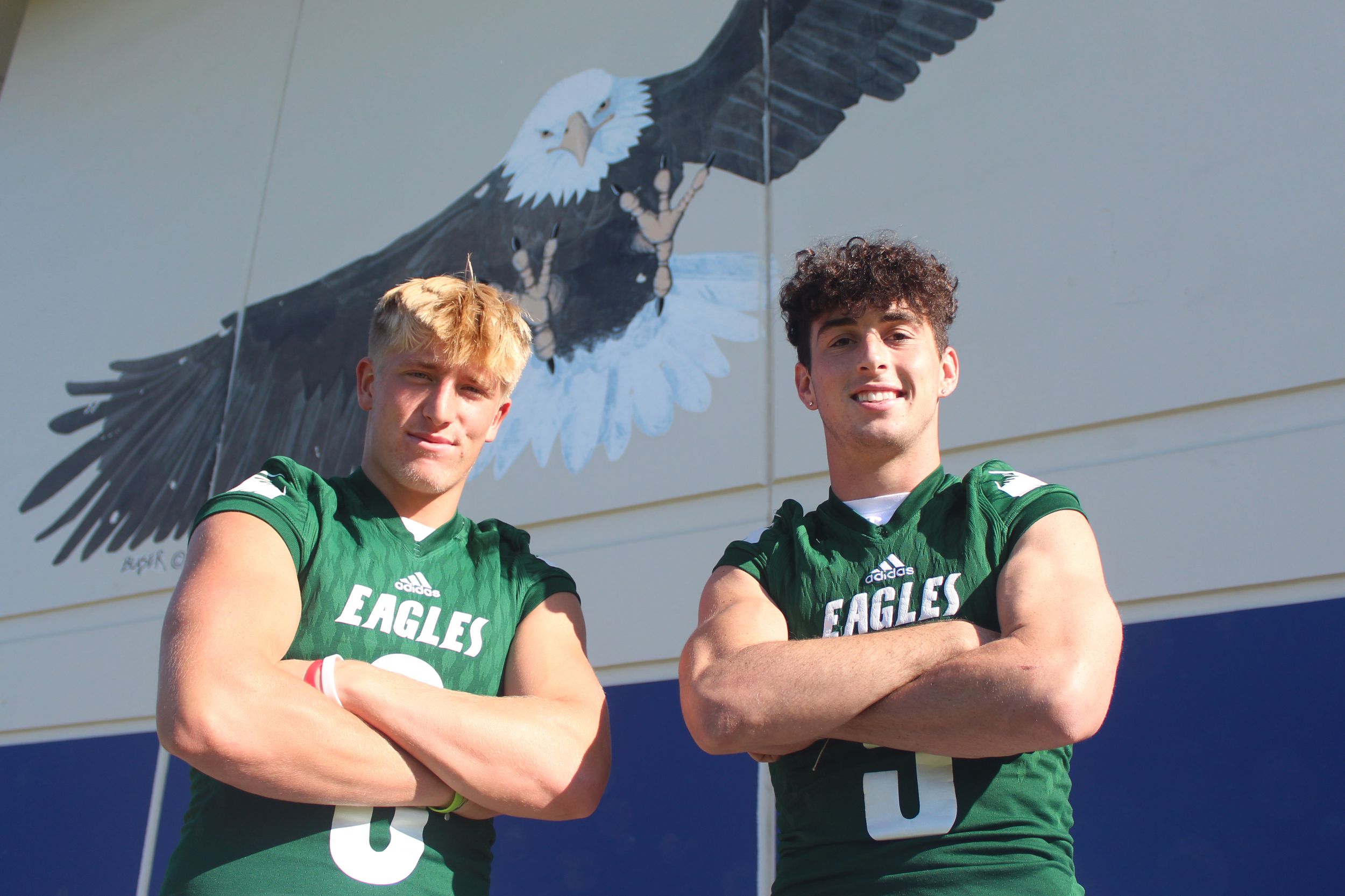 Preps: It’s a big weekend in Greater Spokane League football, as the league champions may be decided. Dave Nichols delves into all the games this weekend in this preview. … The Northeast 1A title won’t be determined for a while but Lakeside is right in the thick of it. Taylor Newquist has this story on how the Eagles have rebuilt their program. … Dave is back with a roundup of Wednesday’s soccer action.

Seahawks: The youth movement is showing dividends, especially on defense. Tariq Woolen is the NFC’s defensive player of the week. … Other youngsters have started to excel as well. … So has linebacker Uchenna Nwosu.

Mariners: Yep, it’s going to be an interesting offseason.

Kraken: Let’s see. The Kraken fell behind at home. Rallied. Lost. Tough start to a season.

• It’s Thursday already? Where did the week go? We’re not sure. All we’re sure about is today will be final day of 2022 we’ll be assured of wearing shorts and flip flops. Tomorrow it will be cold and rainy. The latter is certainly needed but we will miss our flip flops. Love those things. Have since 1974. Until later …