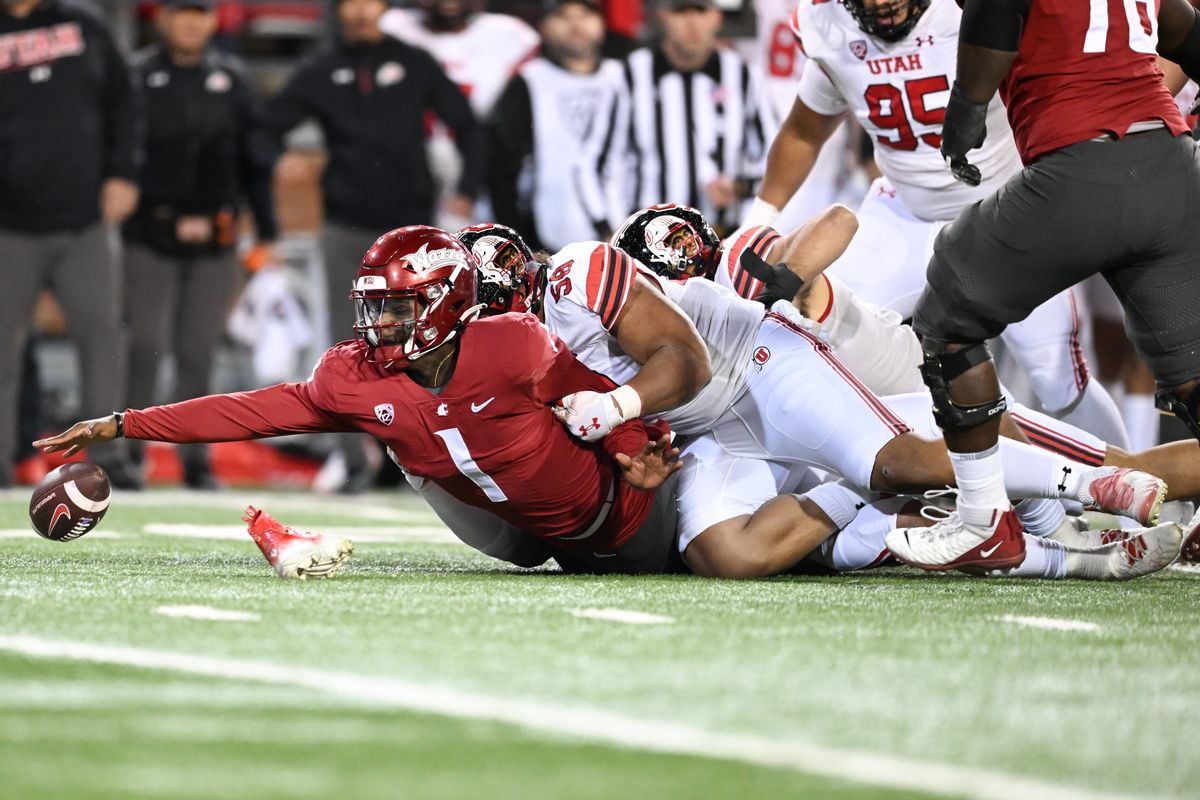 Washington State Cougars quarterback Cameron Ward (1) loses control of the ball as he is brought down by Utah Utes defensive tackle Junior Tafuna (58) as a Utah shoe goes flying in the chaos during the first half of a college football game on Thursday, Oct. 27, 2022, at Martin Stadium in Pullman, Wash. (Tyler Tjomsland/The Spokesman-Review)

PULLMAN – Utah’s offense trotted onto the field with its first-team All-Pac 12 quarterback watching from the sideline, setting up a prime opportunity for an upset.

The No. 14 Utes leaned on their rushing attack and stifled the Cougars offense en route to a 21-17 win on Thursday night.

Barnes completed 17 of 28 attempts for 175 yards and a touchdown. He was backed by a rushing attack that handled 41 carries for 171 yards and two scores.

Meanwhile, the Cougars (4-4, 1-4) continued an ineffective offensive spell that dated back to the second half against USC on Oct. 8. WSU had scored 17 points over its previous nine quarters leading into the fourth against Utah.

The Cougars forced a fumble on Utah’s next drive, but the comeback was for naught, as WSU was unable to find the endzone on a drive starting at the Utah 35.

Utah recovered an onside kick after a Dean Janikowski field goal and ran out the remaining 4 minutes of the game.

Ward completed 27 of 31 attempts for 222 yards and one touchdown. The problems mounted for WSU on third down, where they converted 3 of 10 attempts.

Ward was sacked four times, bringing the Cougars rushing total to a meager 42 yards on 19 attempts.

WSU hung with Utah for most of the first half, but muffed a punt late in the second quarter, setting up the Utes for a short scoring drive.

The Cougars nearly held the Utes to a field goal, until Brennan Jackson was charged with targeting on a would-be third-down stop.

Jackson was ejected and the Utes punched in a 1-yard touchdown run to take a 14-7 lead into halftime.

The Cougars have dropped four of their last five games, after starting the season 3-0. They travel to Stanford next week for a 12:30 p.m. kickoff against the Cardinal, with four games to earn two wins and secure bowl eligibility.

PULLMAN – Utah quarterback Cameron Rising had been at the top of the scouting report for Washington State throughout the week leading up to Thursday’s Pac-12 matchup at Gesa Field. | Read more

PULLMAN – Washington State’s football team is embracing a moniker that has long been used by fans as an unofficial school nickname. | Read more

Thursday night crowd at Martin/Gesa with less than 10 minutes till kick … pic.twitter.com/9S0wSw6XEC

14:06 – UU 0, WSU 0: Surprising start for the Utes offense as usual starting quarterback Cameron Rising is on the sideline wearing a pinnie with his helmet off.

Sophomore Bryson Barnes is in his place.

The Utes leaned on their run game with Cameron Rising on the sideline, gaining 31 yards on eight attempts. Bryson Barnes completed 3 of 5 passes for 25 yards on the drive.

Cougars take over on their own 27.

Cameron Rising is seen on the sidelines pic.twitter.com/tKEIcPI9sd

WSU opened with a 2-yard loss on a wide receiver screen and promptly went 3-and-out on its first possession. It’s been a common sight for WSU, which produced 10 points in six quarters leading into tonight’s game.

The Utes picked up a first down, but were stopped on the next three plays after two incompletions from Bryson Barnes.

1:54 – UU 0, WSU 0: Cameron Ward is sacked on third down and the Cougars are forced to punt near midfield.

Ward completed a 21-yard pass to De’Zhaun Stribling to get the drive going, but he held onto the ball too long on 3rd-and-2.

Cougars will have a chance to take the zeros off the scoreboard in the second quarter.

13:24 – WSU 7, UU 0: Utah’s safety falls down in coverage to allow an easy 29-yard touchdown from Cameron Ward to De’Zhaun Stribling.

Ward has completed 7 of 7 attempts, many screen passes, for 71 yards in the early going. Two plays before the touchdown Jaylen Jenkins picked up a pivotal third down conversion, using a burst of speed to take the edge for a 4-yard gain.

Bryson Barnes has been mostly inaccurate at quarterback completing 4 of 9 attempts, but made a pretty pass to Money Parks for 31 yards on third down earlier in the drive.

TOUCHDOWN UTES 🔥@Utah_Football responds and is on the board 👏 pic.twitter.com/F9nD5Kdtyw

UTES RECOVER! 💪@Utah_Football back on the attack 👏 pic.twitter.com/P6Q9h8sIfr

2:42 – UU 7, WSU 7: Costly mistake on a punt return as two Cougars run into each other and the ball bounces off a WSU player and is recovered by the Utes at the WSU 25.

0:20 – UU 14, WSU 7: Jaylon Glover capitalized on a penalty and punches in a 1-yard touchdown right before halftime.

A targeting penalty against Brennan Jackson extended the Utah drive and set the Utes up with a first and goal instead of a field goal attempt. Jackson was ejected.

Without its first-team All-Pac 12 starting quarterback, Utah found a way to take a lead into halftime.

The No. 14 Utes capitalized on a couple of Cougars mistakes and leaned on its run game to lead Washington State 14-7 after a scoreless first quarter.

Utah has ran 23 times for 92 yards with Cameron Rising watching from the sideline. Sophomore walk-on Bryson Barnes has completed 7 of 15 attempts for 70 yards in his place.

Washington State opened the scoring with a 29-yard pass from Cameron Ward to De’Zhaun Stribling, but the Utes answered right back with a touchdown drive of their own.

Then right before halftime, the Cougars muffed a punt and set the Utes up for an easy scoring drive. WSU nearly forced a field goal, but Brennan Jackson was called for targeting on a third down stop to extend the Utah drive and set up a short touchdown run with 20 seconds remaining.

The Cougars will receive the second half kickoff.

Brennan Jackson has been disqualified due to targeting pic.twitter.com/e6E9AByVOw

7:05 – UU 14, WSU 7: On the other end of the field the Cougars come away with a big fourth down stop of their own, as Daiyan Henley drops Ja’Quinden Jackson on a rush up the middle.

Utah comes up empty after an 8-play 53-yard drive.

5:24 – UU 14, WSU 7: Cameron Ward is sacked on first down for the fourth time tonight and the Cougars drive goes nowhere quick.

Utah takes over on its own 40.

1:24 – UU 21, WSU 7: Bryson Barnes completes a 5-yard touchdown to Dalton Kincaid to give the Utes a two-score advantage nearing the fourth quarter.

WHO ELSE? 👀👏@_DaltonKincaid and @Utah_Football extend their lead at the 🔝! pic.twitter.com/9y9NQOjVz8

Ward completed a 39-yard pass to Tsion Nunnally at the end of the third quarter to set up the score.

QB Cameron Ward darts up the middle on a designed run and #WSU cuts the #Utah lead to 21-14 early in 4Q. pic.twitter.com/6ETnilZCUD

7:49 – UU 21, WSU 14: Ja’Quinden Jackson fumbles and the Cougars recover at the Utah 35, setting them up with a prime scoring opportunity.

4:48 – UU 21, WSU 17: Dean Janikowski boots a 42-yard field goal through the uprights. The Cougars will need a stop and a touchdown drive to complete the comeback.

Who needs to watch Tom Brady and Lamar Jackson go head-to-head when the Pac-12 is in action?

Washington State hosts Utah on Thursday night for a rare mid-week showdown at 7 p.m. on FS1.

WSU’s last outing was a 24-10 loss to Oregon State, where the Cougars offense continued to struggle. Meanwhile, Utah was riding high off a thrilling 43-42 upset of USC.

The defending Pac-12 Champion Utes are looking to repeat for the first time in a full season since Stanford in 2012-13. Utah, along with USC and UCLA have one conference loss apiece, while Oregon is the lone unbeaten in Pac-12 play.

WSU hasn’t played a Thursday night game since the 2017 Holiday Bowl – a 42-17 loss to Michigan State – and last played a regular season Thursday game to open the 2014 season against Rutgers, a 41-38 loss. The Cougars are 25-8-2 all-time on Thursdays.

We are a player-first program. Our players choose the uniform combo each week. We’re honored to play another game with these helmets on. pic.twitter.com/gvI4pCcaIw

14 in the AP Poll pic.twitter.com/kAbRpHL7UY

The Utes hold a 10-9 all-time series advantage over the Cougars, winning each of the last three meetings. The Utes also hold a 5-4 series lead since joining the Pac-12.

Utah won last year 24-13 in Salt Lake City, scoring 17 unanswered points in the second half, after the Cougars held a 13-7 lead early in the third quarter. Utah quarterback Cameron Rising was ineffective completing 13 of 23 attempts for 137 yards.

Two-minute drill: Keys to victory for Washington State against No. 14 Utah

PULLMAN – Washington State coach Jake Dickert made the rounds this week. He stopped by Pullman businesses, checked in with student-life groups and introduced himself to various WSU classes, professors and administrators. | Read more

The pick: Why Utah will beat Washington State

PULLMAN – Washington State and Utah will meet for a late kickoff on a Thursday night in uncomfortably cold temperatures on the Palouse. How weird could it get? | Read more

Commentary: Five Guys must keep Cougars from being sandwiched

There is an apocryphal story passed around by sportswriters at the Spokesman-Review. Well, there are many, but this one is actually true. | Read more

PULLMAN – In hopes of shoring up an offensive line that’s been shaky so far this year, Washington State is making a midseason personnel adjustment and reconstructing part of the position group. | Read more