Learning will always come first at the new Pauline Pascal Flett Middle School, but it will be nourished by a sense of belonging.

Principal Matthew Henshaw made that clear during a media tour last week that showed off the school’s sparkling newness – and something he felt was even more important.

“We want students to feel like they belong here,” Henshaw said.

The campus, situated on Wellesley Avenue in northwest Spokane, certainly does its part, with an exterior of alternating sand- and gray-colored brick veneer and metal wall panels. Grass playing fields stretch north toward the former site of Joe Albi Stadium.

Inside, Henshaw was eager to talk about the new school, which will open Sept. 6 along with the rest of Spokane Public Schools.

“We’re beyond thrilled, and we kind of wanted school to start tomorrow,” Henshaw said as he showed off the commons area. 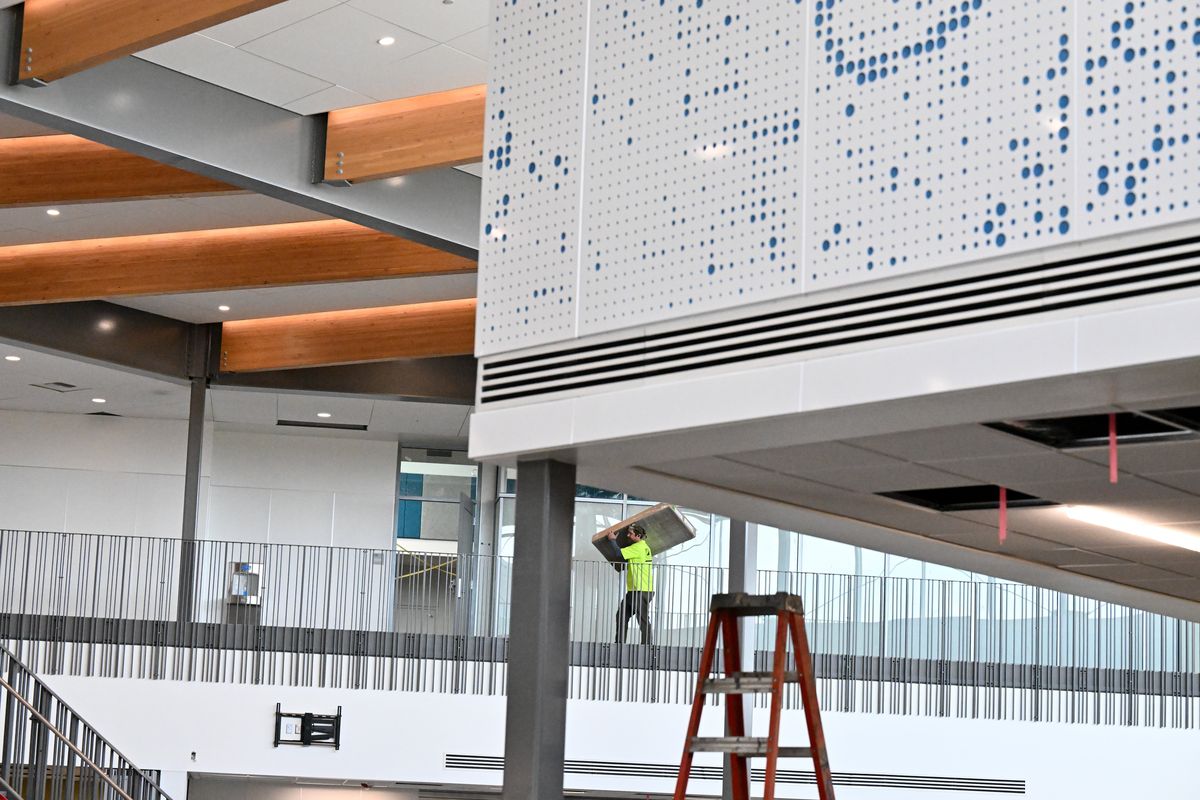 Centrally located, with high ceilings and a floor of polished concrete, the commons is intended as a gathering place – for eating, browsing in the library or seeking help from a counselor.

Nearby is a multi-stepped viewing area that also can accommodate several classes at once for visual presentations.

Most of the 30 classrooms are in the two-story “neighborhoods.” The school also accommodates an art room, two gymnasiums, a library and an aerobics/multipurpose room.

Continuing a trend seen in the completed buildings at Shaw and Glover middle schools, Flett will have no traditional hallways. Instead, the common area will lead students to one of three learning “neighborhoods,” one for each grade level.

Located on two levels, the neighborhoods are intended to aid collaboration among teachers and minimize distractions and time spent between classes.

Upstairs, English teacher Kathy Heaps was preparing her room for the first day of class and taking in the view through an oversized window.

“The kids can look out and see this space, and as a student I can’t imagine having such a flexible space to work in,” said Heaps, who is moving to middle school after 24 years at Westview Elementary School.

Heaps also said she looked forward to being able to send a group of students to work in nearby rooms “and still be able to see them and work with them.”

“It’s a rigorous environment where we want them to be stretching themselves and trying out new things,” Henshaw said.

“And so we see middle school as an exploration opportunity for them to come out of their shell a little bit. But we also know they’re still kids at heart and want to have fun,” Henshaw said.

In a nod to sixth-graders, the school will have a playground and an outdoor sensory area.

The sense of belonging will be enhanced, Henshaw hopes, by placing students into four “houses,” each with distinct traditions and even handshakes.

Asked to compare that to the houses of Hogwarts in the “Harry Potter” series, Henshaw smiled and said he hoped it would be a “fun way for students to get to know one another.”

“We want them to stretch themselves, to come out of their shells a little bit,” Henshaw said.

The 140,000-square-foot building and campus, designed by NAC Architecture of Spokane, cost about $67 million. The general contractor is Garco Construction of Spokane.

The project is financed by the $495 million capital bond approved by Spokane voters in 2018. It is part of the district’s plan to ease overcrowding by moving sixth-graders to a three-year experience at the middle-school level.

In its first year, Flett will serve only sixth- and seventh-graders, because eighth-graders are being allowed to finish at their current middle schools.

The building’s namesake, Pauline Flett, was a Spokane tribal elder who helped preserve the Salish language by co-writing a Salish-English dictionary and teaching Salish to students at Eastern Washington University.

Although she didn’t have formal training in linguistics, Flett was among the first to use the new alphabet to transcribe words and record the tribe’s legends. She died in 2020 at the age of 93.

Henshaw said he hopes to “incorporate the Salish language into instruction – that’s one way we can to try to honor her.”