A GRIP ON SPORTS • The first competition in any season leads to way too much over-reaction. No sport lends itself to that more than football, with its once-a-week schedule. Let’s join in, shall we?

• Washington State is in trouble. Idaho is going to have a great season. That’s the quick take after the Cougars held off their neighbors 24-17 in Pullman last night. Is it the right one as well? 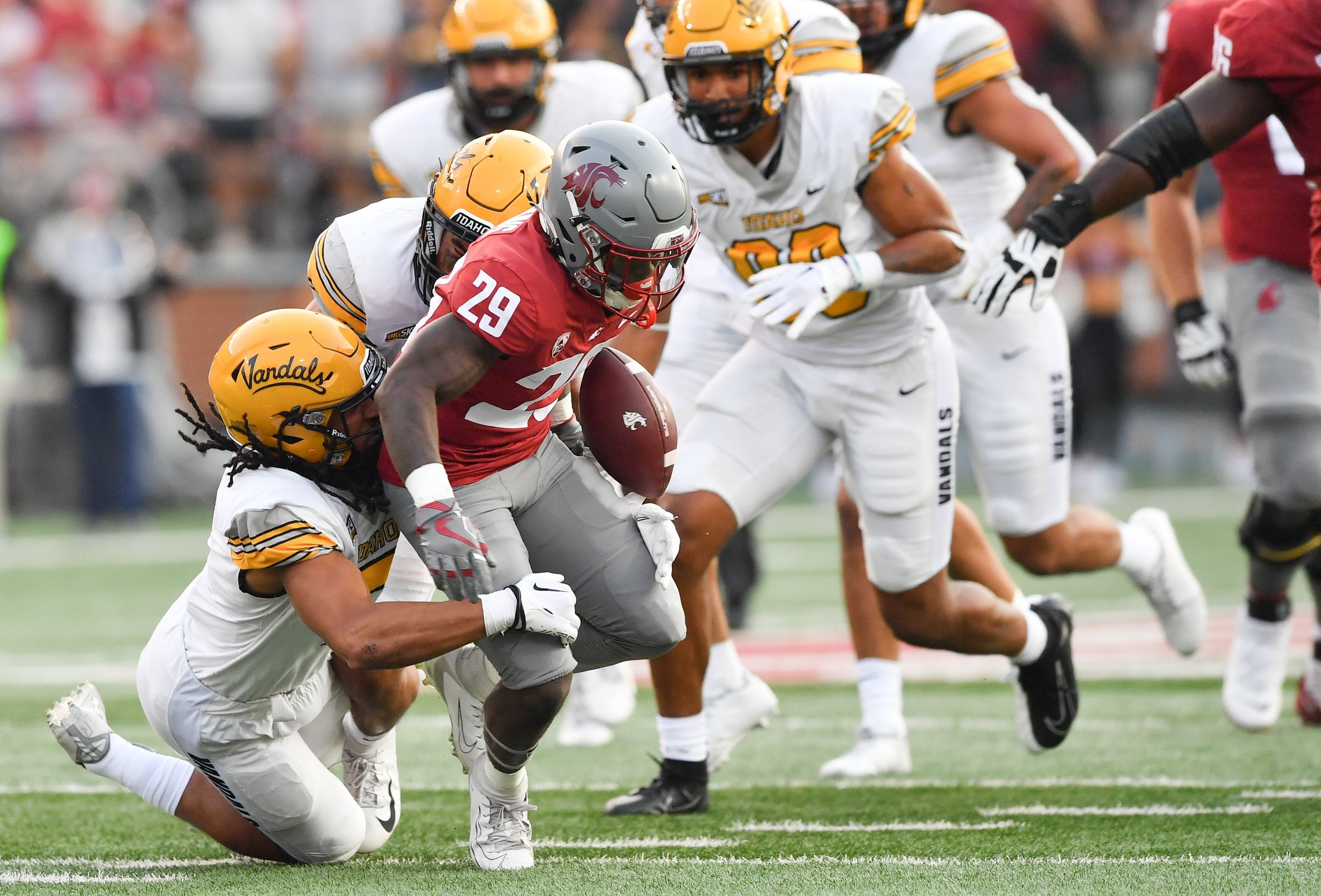 We’re sure it isn’t. Mainly because both are a little at odds with each other. If WSU isn’t that good, then the Vandals’ outstanding effort needs to be devalued some, right? Conversely, if UI has a great season, it is entirely possible the Cougars will be fine. More than that, actually, since the Cougs showed resilience after nearly handing the Vandals a win.

The reality of the situation is simple.

Idaho played hard. Flew around, caused havoc. Took chances, not just once or twice but quite often – the Vandals were 3-of-7 on fourth down, more than one of those in their territory. This could be the hallmark of a Jason Eck-coached team (we don’t know as we have such a small sample) or it could have been just a who-gives-a-spit attitude displayed in the opener against a favored FBS foe.

Washington State made mistakes on offense. Looked tight. Looked a bit out of sync. And rightfully so. So much is new. The Cougars have a new quarterback, a new offensive line, a new scheme – there were tight ends for goodness sake – and a new head coach to impress. Being perfectly in sync was never in the cards.

Besides, the Cougars travel to Wisconsin next week in their key nonconference game, so why show the entire package against the Vandals? Save some stuff for the Badgers – and the national TV audience.

Final thoughts? Vandal fans can celebrate – and they should. Eck established a baseline of effort that will get them through tough spots. They will be fun to watch if it continues. And Cougar fans needn’t worry. The defense, if it stays healthy, will match up well with Pac-12 foes. The offense will coalesce. They will be fine.

• One last WSU thought. Though improved, the interior of the WSU defensive line is still developing. Next Saturday, against the size of Wisconsin, will be tough. Speed can cause havoc early but slows down as the game wears on. Size never gets smaller. 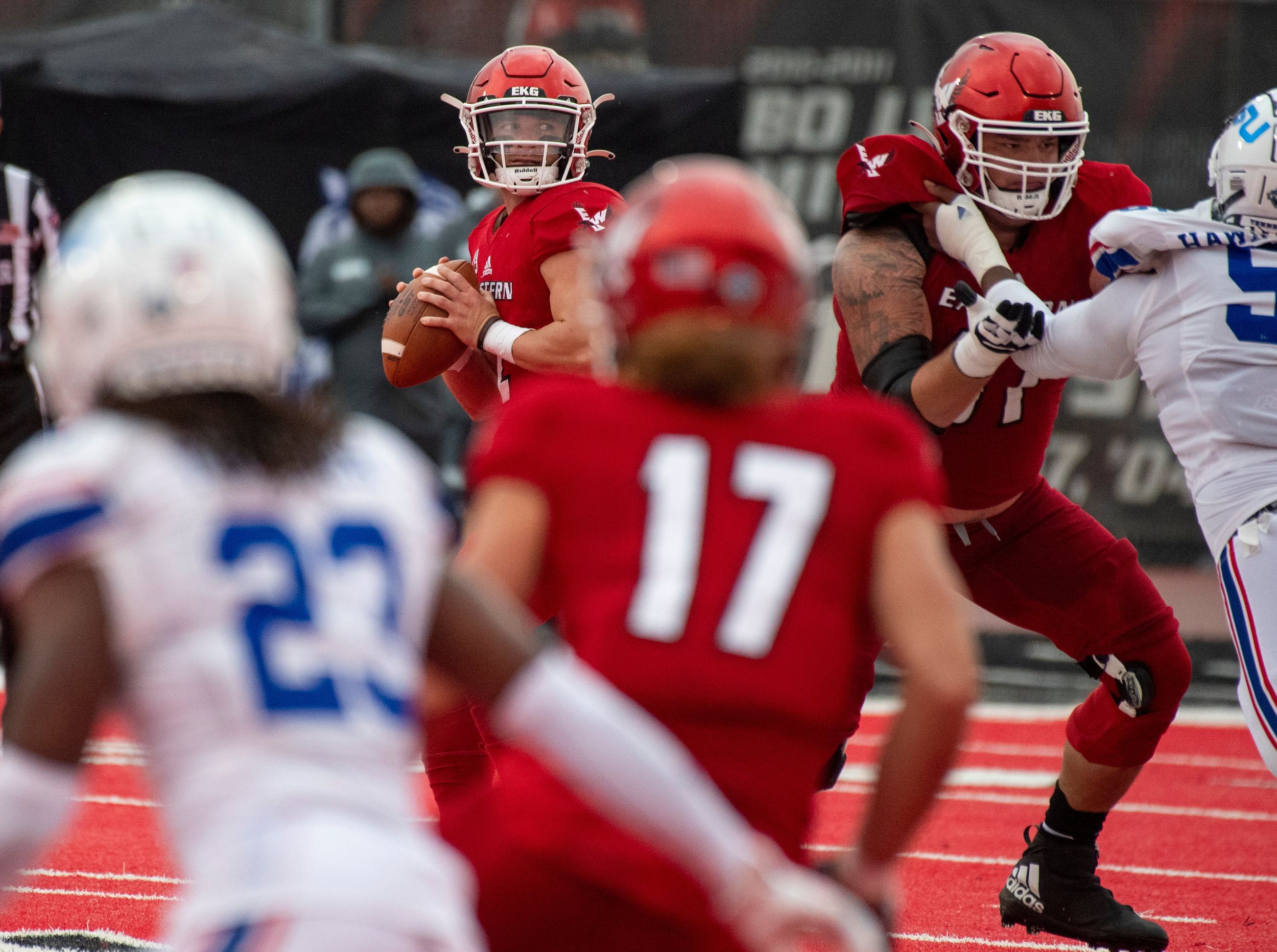 • Eastern Washington isn’t the powerhouse it has been most of this century. This is a transition year. That’s fine. If the Eagles’ offense develops from here until November, they’ll be in every Big Sky game. The defense should be more than capable against conference foes. Yes, Tennessee State rushed for 290 yards. That’s too many. But Eddie George’s team made it a priority, something many Big Sky schools don’t do.

Aaron Best’s defense, which gave up three big plays early, settled in and showed why it should be capable of holding the line until the offense reaches EWU-expected levels. That might not take as long as feared, either, as Gunner Talkington showed what’s possible, throwing five touchdown passes and leading the game-winning, fourth-quarter drive.

Good or bad, Saturday tight win was just that, a win, and nothing to over-react to.

• Finally, the Pac-12 was great this weekend. And awful. Funny, it’s the latter the national memory will file away.

The conference won nine times. Didn’t lose to a Group of Five school. Or an FCS one. That’s progress. Sure, Colorado lost (at home) but the Buffs are the Vandy of the conference this year. It was a good weekend. Except …

Ya, about that. Oregon just wasn’t ready to deal with Georgia’s size and speed. And the Ducks weren’t tough enough, mentally or physically, to change that once they settled in. They didn’t compete. The 49-3 butt-kicking will resonate for a while.

But it didn’t hurt as much as Utah’s failure at Florida. The Utes are still the conference’s best until someone knocks them from that perch. And they self-destructed, mentally and physically, against what’s expected to be an also-ran SEC school. The 29-26 loss in the Swamp was as much on them as it was on the Gators.

The 9-3 mark was just fine for the Pac-12. Those two losses, however, will sting a long time. And that’s no overreaction. 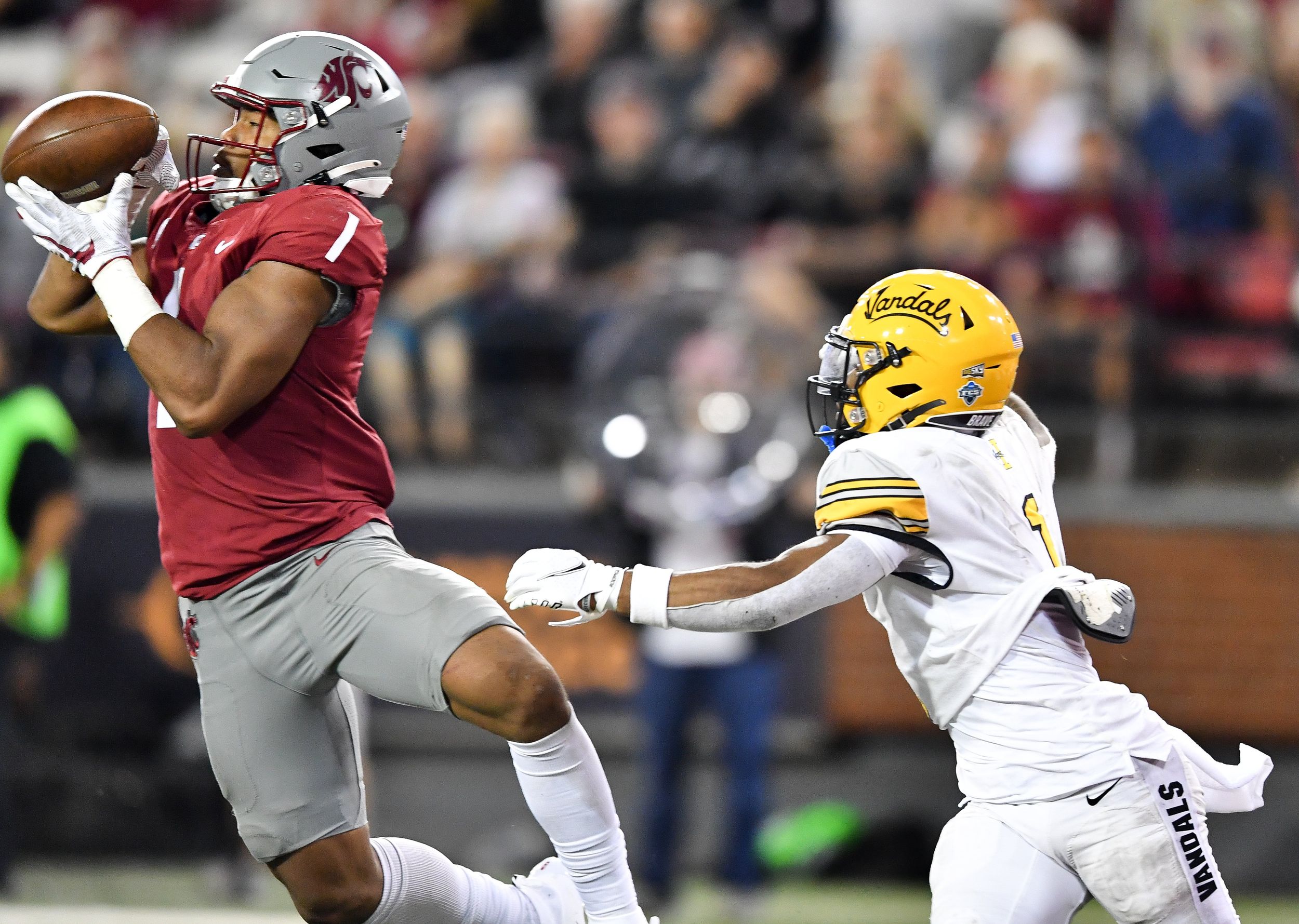 WSU: We have a lot to pass along. Colton Clark gets it started with his game story, a short story on the flag raisers and a piece on who was suited up for the Cougars. … Theo Lawson made a return to Pullman, watched his alma mater play well and wrote this summary of the game. … Tyler Tjomsland was also at Martin Stadium and has this photo gallery. … The folks in the office put together a recap with highlights and the difference makers. … We watched from home and had our TV Take. Ryan Leaf has a shot at being pretty darn good as an analyst as his experience level grows. … Elsewhere in the Pac-12 and college football, Jon Wilner has his thoughts on the weekend’s results in the Mercury News. … We start in Georgia, where the Ducks’ loss in Dan Lanning’s debut was covered in depth by the Oregonian and also by its former columnist John Canzano. New Oregon starting quarterback Bo Nix made some crucial mistakes. … In Florida, the Utes showed they can play with anyone. Now they have to show they can defeat them. … Washington began the Kalen DeBoer era with a resounding win over Kent State. It was much better than last year’s opener. … Oregon State had either the best or second-best win in the conference, manhandling visiting Boise State 34-17 despite some Beaver mistakes. … The best win might have been turned in by Arizona, which defeated San Diego State 38-20 on the road, ruining the unveiling of the Aztecs’ new stadium. … USC had an impressive 66-14 win as well, but considering how poor Rice was last season, the Trojans probably should have rolled. Then again, they didn’t do what was expected before Lincoln Riley arrived. … The Rose Bowl looked emptier than it did for my sister’s graduation from Pasadena High – yes, they held the 1971 ceremony in the stadium – and it sounded quieter too. Still, the Bruins got their act together and won going away, 45-17 over Bowling Green. … California started slowly against UC Davis but picked it up and won its opener 34-13. … Stanford had little trouble with Colgate, winning 41-10. The Cardinal started with a big run and got the typical solid game from Tanner McKee. … Colorado looked like its old self in the home loss to TCU. That is not a good thing. EWU: Dan Thompson and Jesse Tinsley survived a weather delay – lightning in the area – and have this coverage. Dan has the game story and a notebook while Jesse supplies the photo report. … Elsewhere in the Big Sky, the two best teams are expected to be Montana and Montana State. They both won Saturday, with the Griz unveiling a new quarterback against Northwestern State and the Bobcats handling visiting McNeese State 40-17. … Northern Colorado was outscored by Houston Baptist 46-34. … Sacramento State handled Utah Tech 50-33. … As we mentioned above, UC Davis gave Cal a bit of a scare. 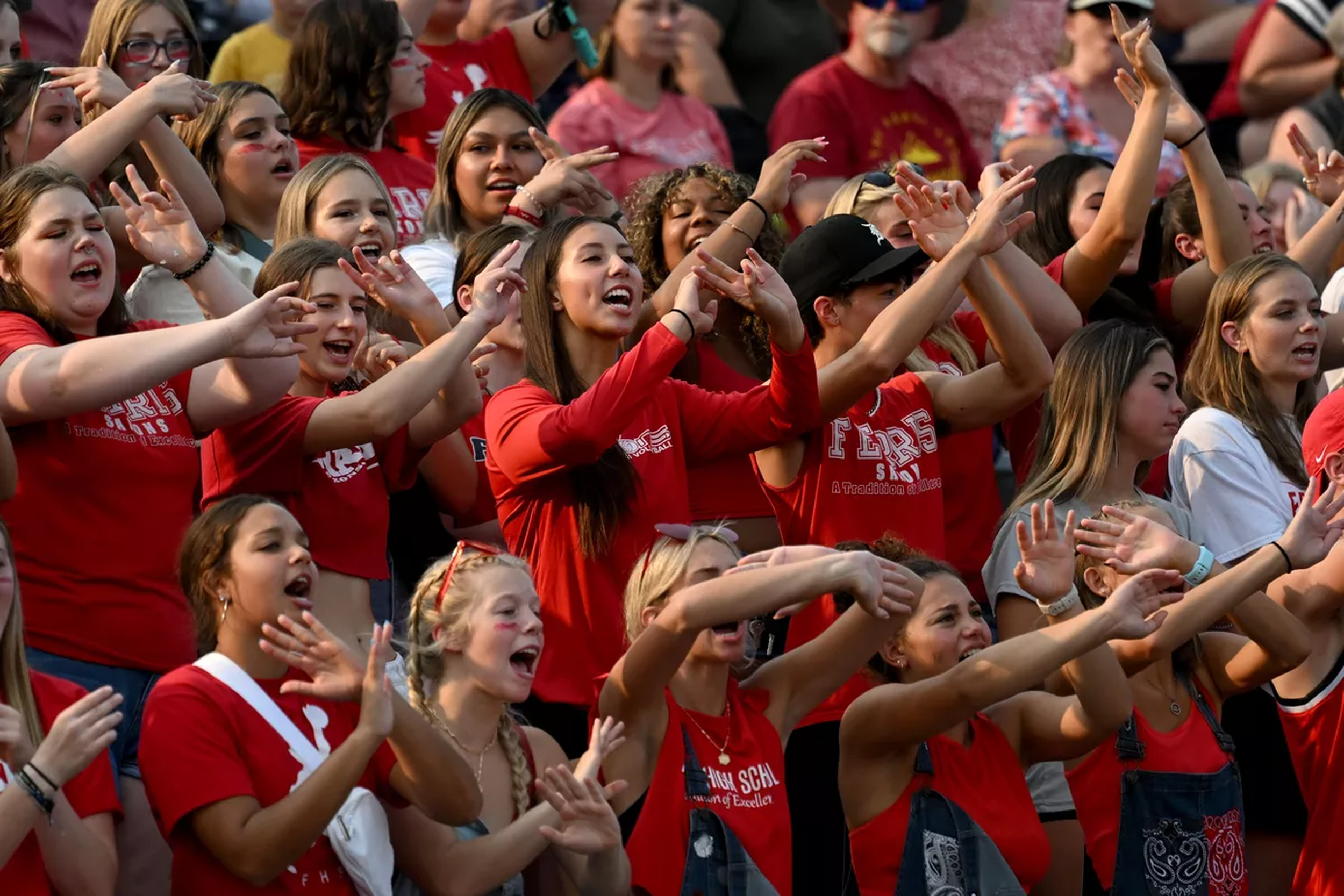 Preps: Dave Nichols is back taking some time on Saturday to summarize the weekend’s prep football games.

Indians: Dave was also at Avista last night as Spokane pretty much sealed its fate, losing in 10 innings to visiting Vancouver. The Indians are 5.5 games back with seven to play.

Tennis: Serena Williams ended her career the same way she went through all of it. On her terms. Mariners: Robbie Ray has been really good lately. Especially against Cleveland. He was again Saturday in the M’s 4-0 win. … J. P. Crawford is struggling.

Sounders: Let’s be clear. Today is must-win territory for Seattle. A draw against Houston at home isn’t good enough.

Storm: Despite the WNBA semifinal series tied at a game apiece, Seattle is still in the driver’s seat against Las Vegas. The Storm are at home today.

• Not enough is being made about Utah basically handing Florida the victory last night. The Utes fumbled at the goal line on a second-half fourth-down play, a play-calling decision that cost three points. They also went for two way too early, a decision that cost them another point. How much did Florida win by? It seems so odd for a Kyle Whittingham-coached team. … Lest we forget, happy birthday Tyler. Until later …