Thelma Yasuhara was in a wistful mood Tuesday morning as she walked through the new northeast Spokane middle school that bears her husband’s name.

As students moved briskly in search of their classrooms, the 94-year-old took a long look around and said, “it’s overwhelming.”

It certainly was that, as hundreds of students, teachers and staff took their first steps into the new Denny Yasuhara Middle School, named for the longtime teacher and civic activist who died in 2002.

Thelma Yasuhara pointed out that her late brother also has a school named in his honor in Los Angeles. 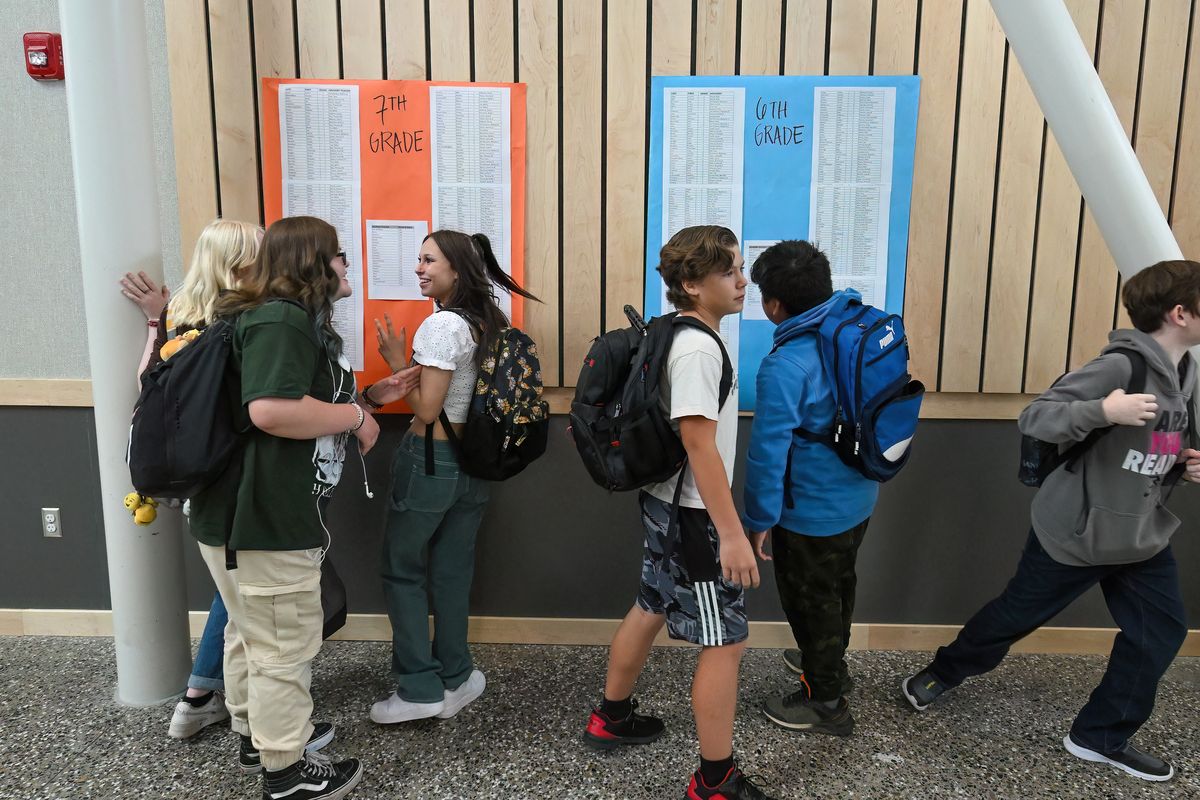 After entering their new school for the first time, Yasuhara Middle School students look for where their classrooms are located, Tuesday, September 6, 2022. (COLIN MULVANY/THE SPOKESMAN-REVIEW)

“Today, I can picture them together in heaven, high-fiving each other and saying, ‘How about them apples?’ ” Yasuhara said.

On the ground, everyone was celebrating the fruits of the 2018 capital bond, which led to the construction of Yasuhara and three other middle schools on the north side, including the new Pauline Flett building that also opened Tuesday morning.

Two more middle schools – Carla Peperzak and the replacement for Sacajawea – are due for completion next year on the South Hill.

Officials from Spokane Public Schools thanked voters for passing the $495 million bond; so did Principal Stephanie Lundberg, who also praised her staff after a 2 ½-year journey “that none of us will ever forget.”

Then she met the eyes of hundreds of students and hoped that one day they would appreciate the moment as much as she did.

“We worked to ensure that this is your school, that you get to set the tone and tenor of our building,” said Lundberg, who also promised that Yasuhara will be a building “where every student is seen, heard and valued.”

Hundreds of them gathered outside on a chilly morning – a sure sign that it’s time to get back to school.

A few students congregated at the small playground, while others sat with friends or parents. Many had already seen the building’s interior during an open house last week.

“I love it,” said April Palmanteer.

Her daughter, JoceLynn, wasn’t so sure.

The legacy of Denny Yasuhara was never far away on Tuesday.

School board president Mike Wiser praised Yasuhara, who left a legacy as a teacher for three decades.

“He was beloved by his teachers and peers,” Wiser said.

By then, most of the school’s teachers were milling around with their guests. Most wore sweatshirts donated by the Hifumi En Society.

Founded by Denny Yasuhara almost five decades ago, Hifumi En supports the Japanese-American community in the area through cultural awareness.

Nakagawa praised Denny Yasuhara for his dedication to teaching and community activism on behalf of Spokane’s Japanese-American community.

“He challenged students to work up to their potential and cared about each of his students,” Nakagawa said.

Known for his generosity, Yasuhara often dug into his own wallet to help a needy child.

When he retired, about 100 former students threw a party to thank him.

According to a newspaper account of the party, attendees said he “taught us responsibility and accountability,” that he was “one of those teachers who people remember for their whole lives,” and that he “did the job my parents should have done” but he “did it for 20 to 30 kids every year.”

Then Nakagawa unveiled the surprise: every student at the school also will receive a Yasuhara sweatshirt.

“Now go be the best version of yourselves,” Nakagawa said.

Most everyone clapped and cheered, which rendered the ribbon-cutting ceremony almost an afterthought.

Moments after the yellow ribbon fell to the ground, students moved quickly but uncertainly to their classrooms on the first and second floors of the 140,000-square-foot building.

In their wake followed Thelma Yasuhara, who, like her husband, was a teacher in northeast Spokane.

Thelma was pushing a walker as she recalled Denny’s achievements.