WELLPINIT – Clark Pauls, the football coach and athletic director for Wellpinit High School, surveyed the new artificial turf field behind the school and had to pause for a moment.

“Kind of surreal,” he said. “I still don’t understand how we got it. I’m thankful for it. But it’s just a wild experience and how quickly we got it done and how we’re actually playing all of our home games here for this year. It’s just an amazing thing for our kids in our community.” 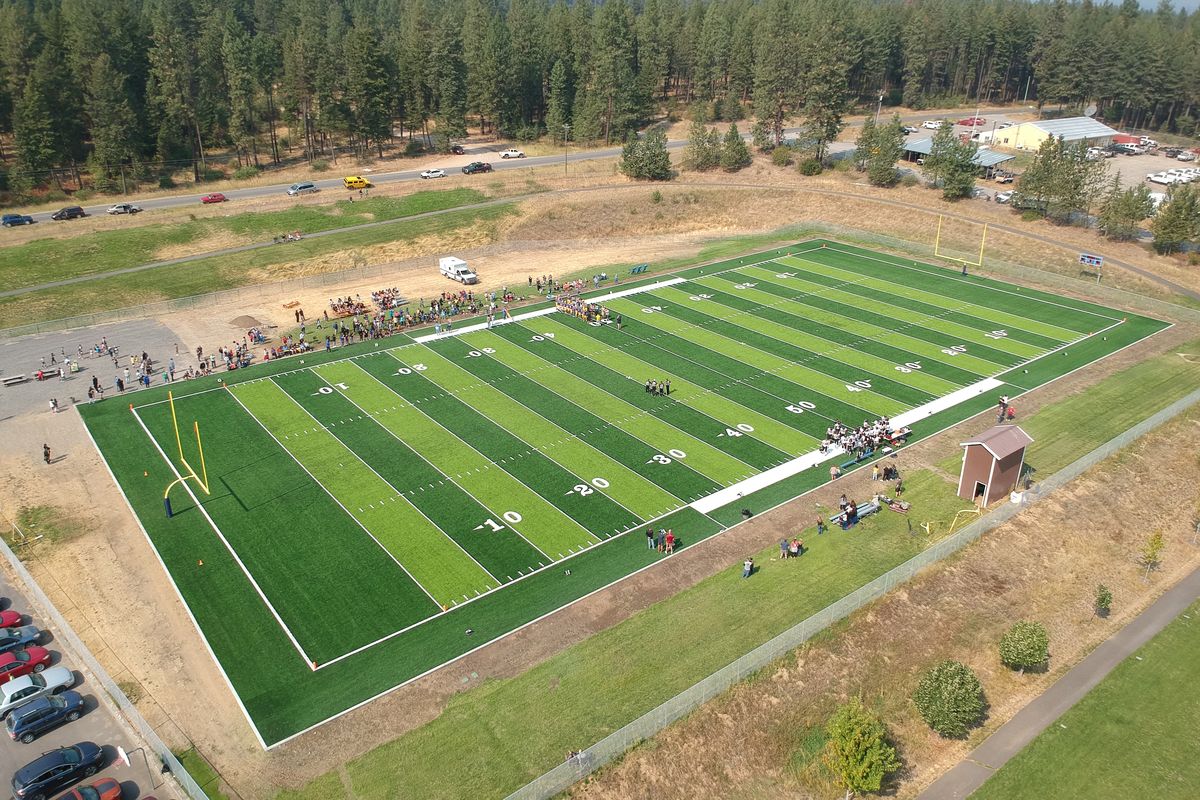 The permanently green football field at Wellpinit High School is courtesy of a grant from the National Football League, shown Friday, Sept. 9, 2022. The artificial turf makes Wellpinit the envy of tiny schools dotting Eastern Washington, where virtually every field is brown and dead by September. Wellpinit hosted the first game on the field Friday. (Jesse Tinsley/THE SPOKESMAN-REVIEW)

Pauls was involved in every step of the process from finding the potential grant to getting school board approval through groundbreaking in May until Friday’s opening game.

If he was taken aback by the final product, the rest of the community was just as elated.

“It’s really an accomplishment,” said Greg Abrahamson, a councilperson for the Spokane Tribe of Indians. “When I went to school back in the ’70s we used to have to play down at the pow wow grounds. We had tepee poles for goal posts. There were gopher holes everywhere. It’s quite an accomplishment for the young people coming up to be able to have something like this to be able to play on.”

“This is amazing,” Wellpinit School District board member Bobbi Williams said. “We have never had a sports facility like this in our community.

“I am excited that this will bring in more teams who want to use the field, but also it will encourage our community to organize sports teams, whether it be football, soccer, any of the other kind of recreational activities on this field. It’s exciting to see this happen in Wellpinit.”

Less than four months ago, the space was brown grass, dirt and gravel, with potholes throughout the football and baseball fields, dug up by cleats running and stopping in the often muddy field.

On Friday, the school debuted its state-of-the-art artificial surface for its first home football game of the season, which now rivals any of those found in the Greater Spokane League.

Williams lives just down the street from the school and was able to have a first-hand look at the construction and installation.

“Every time I drove by I was amazed at the progress and how quickly it was happening. It really just came to life.”

The school district was granted $250,000 from the program, with matching funds from the district.

“It does not seem real,” Williams said. “It’s kind of unbelievable a school our size has an opportunity like this. It really was a team effort between us and the NFL, LISC, and the tribal council to make this happen. We appreciate all the support we were able to receive throughout the process.”

It was almost by accident that Pauls even found out about the possible grant.

“I was just looking for (grants) for some new equipment – USA Football has a lot of those,” he said. “I saw this and I immediately went to my business office manager and asked, ‘Hey, this is a grant I think we should go for,’ and she’s like, ‘Yeah, we can make it work.’ ”

Construction finished on the project so recently that maintenance crews were still moving aluminum bleachers along the sidelines less than an hour before the noon kickoff between Wellpinit and Springdale.

The contrasting shades of green in the turf stand in stark contrast to the dry, brown grass surrounding it, the faded scoreboard on the north side of the field and the sideline markers, which were bent and needed athletic tape to be held together.

A grandstand and other improvements are still on the way, according to Pauls, who stressed it was more important to get the field installed to be able to play games this fall.

“I think just everybody needs to come out and see one game here because it’s just going to be great.”

Pauls said the players reacted with equal parts joy and nerves when they were allowed on the field. It was the first time most had seen, let alone played on such a surface.

“I think it took a while for them to get used to the turf and stuff,” he said. “They’re all just smiling about it and looking at it. So, it’s just a great experience.”

The Wellpinit-Springdale matchup was part of a doubleheader at the field on Friday – Selkirk was the “home” team for the second game against Waterville-Mansfield.

“Hopefully in the years to come, we’ll just continue to be doing that and share our great facility with everybody in the surrounding communities,” Pauls said.

Wellpinit already has one of the nicer basketball gyms in the Class B ranks in the region. Adding the new football surface adds to the prestige in the community.

“It’s a pretty big sense of pride just from the fact that we’ve always been kind of known as a basketball community – which is great and our kids really enjoy it,” Pauls said. “But I just feel that now that we have this facility like this, we’re gonna get more and more kids to turn out for football, and it’s going to be a great experience for them.”

“The gym has always been the pride of our school,” Williams said. “To have a field to kind of match that, it is a sense of pride.