This is the third in a four-part series about kayaking the Noatak River in the Arctic Circle. The river, which anchors the largest undeveloped watershed in North America, flows from its headwaters at the base of Mount Igikpak in the Brooks Range, through the Gates of the Artic National Preserve and the Noatak National Preserve. Combined these two protected areas are nearly seven times larger than Yellowstone National Park. This month Spokesman-Review outdoors editor Eli Francovich kayaked the Noatak River with Spokane natives Chris and Cary Kopczynski and Jim Wood.

Noatak River, Alaska, Aug. 3 – This is clean country. No trash. No fire rings. No beer cans, or bits of plastic or torn segments of candy wrappers, the kind that fall out of a pocket and disappear into the wind, no matter how concise your movements.

We all notice the absence. Words like pristine come to mind. Unspoiled. Virgin. Wild. These adjectives pepper wilderness writing and it’s not hard to see why, particularly on a place like the Noatak River in Alaska’s Arctic circle.

We’ve been on this river for a week and change and, other than passing a camp and chatting briefly with a guided party on our second day (about 10 people, most from Seattle, paddling about 50 miles of the river) we haven’t seen another human, or sign of a human. This reminds my travelling companions, all of whom are in their 70s, of their youth when they were just beginning to explore the world’s wild places. They tell me about climbing Mount Rainier before the crowds and permits. I tell them about WAG bags (sealing bags that climbers and hikers relieve themselves into, particularly important in high-use areas like the Washington Cascades) and they are flummoxed by the thought of carrying excrement, no matter how well sealed, in your backpack.

We don’t do any of that here on the Noatak. Cat holes suffice for excrement and every few days we burn our trash. That’s the beauty of this trip and this place, we act as if we’re the only ones because we, for the most part, are. Isolation allowed by geography and protected by affluence.

Meanwhile, as we float down the Noatak, Spokane is in the grip of a heat wave and hundreds of homeless men and women are living in a camp alongside I-90. Others are getting by pay-check-to-pay-check. Underemployed, or overemployed and underpaid, either way unable to pay the entrance fee to a heaven like this. And that’s not accounting for the most expensive and hardest to itemize expense: experience.

Chris Kopczynski is a firm believer in the healing powers of wilderness exposure. And I agree with him. He says if everyone could have an experience like this, just once in their life, the world would be a better place. And I agree with him. This sort of isolation is a powerful antidote to the stresses of work and relationship.

But, if everyone had access to this river, even only once in their life, we wouldn’t be able to dig shallow holes for our waste or burn our trash. It would be a permitted and mediated experience – like Yosemite, Yellowstone, or Rainier – as it would have to be.

It’s a paradox that brings me up short each time. How to reconcile the spiritual and physical importance of the wilderness with the luxury and wealth it requires? All while human suffering lives under every bridge and around every corner?

I think about this falling asleep wrapped in a $600 sleeping bag. 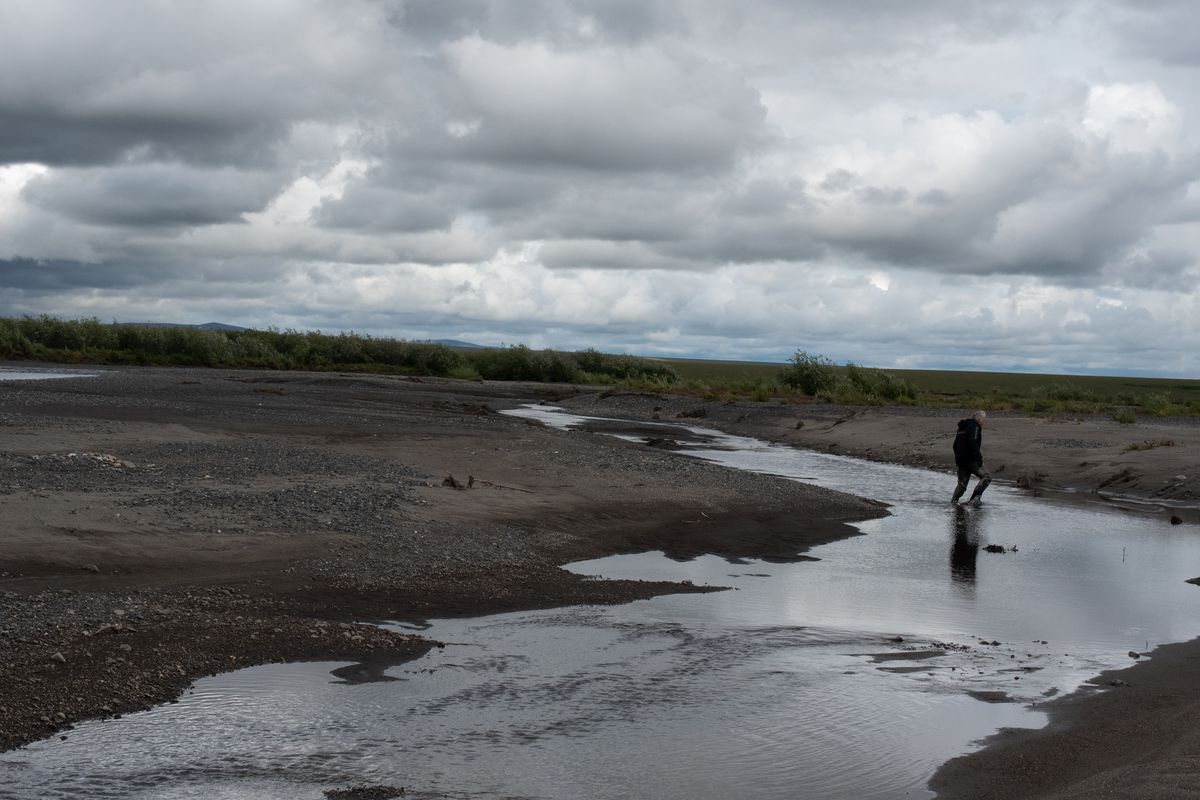 Cary Kopczynski crosses a stream flowing into the Noatak River in the Arctic Circle on Aug. 5, 2022. (By Eli Francovich/The Spokesman-Review)

Aug. 4 – I’ve never seen riverbanks like this. The constant movement, combined with the annual violence of the ice breaking, means that the banks are sharp, the river cut deeply into the soil, the still frozen foundation of this land often visible as we paddle by. Sometimes huge clods of soil break free, roots from the plants above free-hanging, diving for the water below.

Some of this is natural, the normal erosion of an undammed river. Some of this is climate change, ground that has been frozen for thousands of years beginning to thaw. Increasing a natural erosive process. It’s hard to tell the difference, which seems illustrative of something, but floating on the river listening to the wind keen through my fishing pole I can’t bring the thought home.

We take a half-day today. We’re camped on a large sandbar made by the joining of the Noatak and Cutter Rivers, the Noatak River murky from the silt of all that erosion, the Cutter clear. We fish for Arctic Grayling in the riffles made by the two rivers and Cary Kopczynski catches one, which we cook for lunch before pushing off and continuing our slow fall to the sea. The fact of grayling – a fish species known to only inhabit clean waters – proves what anyone would guess, this river is clean and unpolluted despite the murk.

Aug. 5 and 6 – Time warps on a river. Minutes stretch into days and days drop to minutes.

Aug. 7 – The weather has turned. Rain and wind blew in last night and we wake at 6 a.m. to a gray and wet horizon, the constant sun replaced by low-hanging clouds. Ice and frost formed on our drybags and the tent fly, cracking and sloughing to the ground when moved. We debate, from the warm confines of our bags, whether to rest or paddle. Yelling over the gusting winds we decide to spend the day here.

Chris and I, who are sharing a tent, heat water for oatmeal and coffee and lay in our bags. We talk and then lapse into silence. I write and read. Chris guesses he’s spent 4 months of his life sitting in a tent on one continent or another waiting out storms, wiling away the time with Shakespeare and conversation. He tells me about 100 mph winds on Denali. About sudden Himalayan storms forcing mid-climb bivies where the weather forecast remained as unknown as the ground ahead.

I see a lifetime of experience in Chris’ movements. The stove is set up the night before in the tent vestibule, breakfast and coffee sitting next to it, easily accessed with a half turn in a sleeping bag. He’s constantly considering the worst outcome. What if our down bags get wet? What if someone is injured, sick, or just plain over it? He tells me about climbing partners who couldn’t handle the boredom and uncertainty of waiting out a storm.

I enjoy the tent-bound day. A day with nothing to do but nap, think, write and, perhaps if the weather clears, walk. A luxury with a shelf life as I’m sure after two or three days I’d be stir crazy.

Chris’ constant considering of the worst-case scenario confuses me at first. This trip feels so tame and controlled (physically not demanding for me and the security of satellite phones and bush plane pickups offer a wide safety net) but as I think on it, I realize that he’s seeing a layer deeper than I. A trip like this is tame and safe and simple, until it suddenly, catastrophically, isn’t. I remember a friends’ mother who, on a guided river trip in Idaho, got caught in a downed tree and drowned. One minute laughing and relaxing with her grown children. The next gone. I take Chris’ concerns more seriously. After all he’s survived a career full of cutting-edge climbing. Most don’t.

Aug. 8 – The weather is marginally better. Cold and wet though. We leave at 8 a.m. shaking our arms and legs to drive out the chill. Frost and sand coat our kayaks. Soon after starting we hit rapids. Class 2 at the most, probably less, but still enough to get water in our boats. Chris, Cary and I are wearing waterproof waders. Jim Wood is wearing rain pants, which soak through. He is wet and in the cold wet can be very bad.

We pull in early for lunch and scrounge wood to build a fire in the lee of an eroded riverbank. Cary nurses the small flame, telling stories about close calls he’s had hunting, and I boil water, serving cups of tea and coffee. The chill leaves slowly and we linger by the fire. Jim changes into dry clothing and doubles up the rain pants and we push off.

Later I consider how that was one of those inflection points where things could have avalanched from uncomfortable to very bad, or worse. But after more than two weeks together we’re functioning as a team, one that has a considerable reservoir of experience from which to pull.