For the second day in a row on Monday, Spokane woke to unhealthy air quality levels from smoke that blew in from North Idaho, northeastern Washington and western Montana.

Spokane Regional Clean Air Agency air monitors were showing air quality in the unhealthy for all people category Monday morning, and maps from the Environmental Protection Agency indicated the air was similarly unhealthy in most of Eastern Washington, North Idaho and western Montana.

Greg Koch, National Weather Service meteorologist in Spokane, said a light wind coming from the northeast has blown smoke into Spokane from fires near Bonners Ferry, as well as near Cusick, Washington.

The Kootenai River complex of fires has burned nearly 20,000 acres northwest of Bonners Ferry. Nearly 350 firefighters are fighting the three fires, which started in August and merged.

The wind will change gradually starting Tuesday and start coming from the southwest.

“That will help bring some improvement,” Koch said. “I would not anticipate bright blue sky days until maybe late this week.” 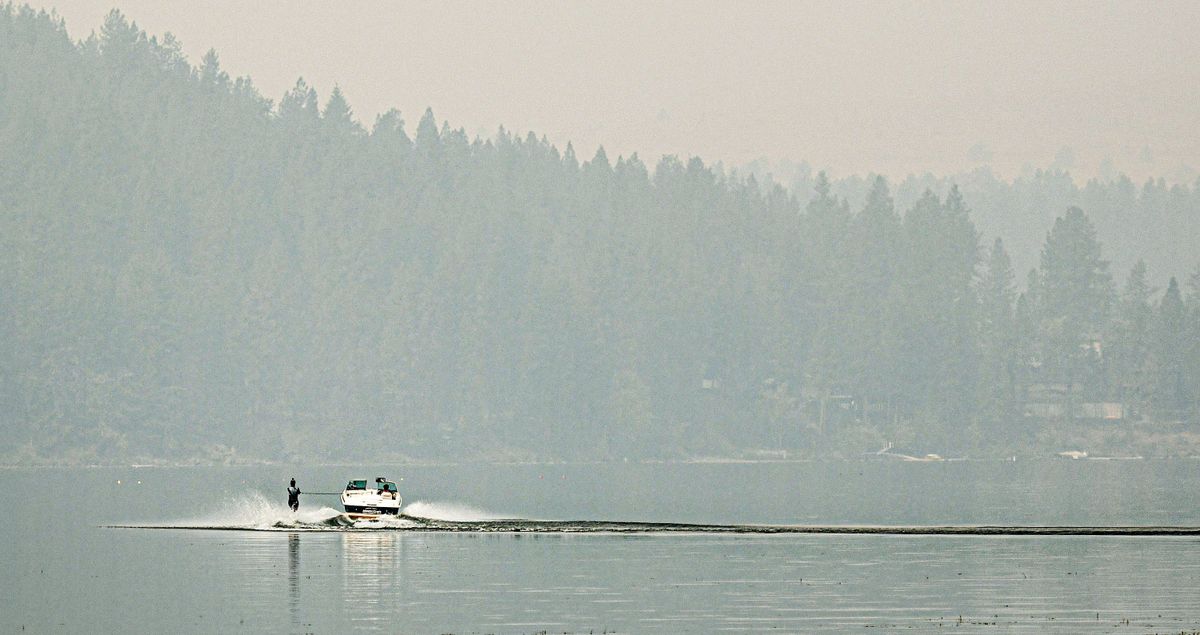 A water skier braves the smoke from area fires while skimming the surface of Liberty Lake on Monday, Sept. 12, 2022. (Kathy Plonka/The Spokesman-Review)

There is a chance for showers and thunderstorms late Tuesday and early Wednesday.

“There will be opportunity for some rain over the next seven days, but at this point in time it doesn’t look like a wide, ground-soaking rain to really knock these fires down significantly,” Koch said.

Still, the rain could offer some relief, and humidity levels will be higher and temperatures lower this week than they were last week. High temperatures are expected to be in the lower 80s Monday and Tuesday and fall into the mid-70s for most the rest of the week. The average high for Monday is 76.

Poor air quality in Spokane from wildfire is a relatively new phenomenon. The clean air agency began measuring air using current standards in 1999. The first time wildfire smoke caused the index for a day to top 100, in the “unhealthy for sensitive groups” category, was in 2012. It’s happened 60 times since then, including four times when the index topped 300 – in the hazardous category.