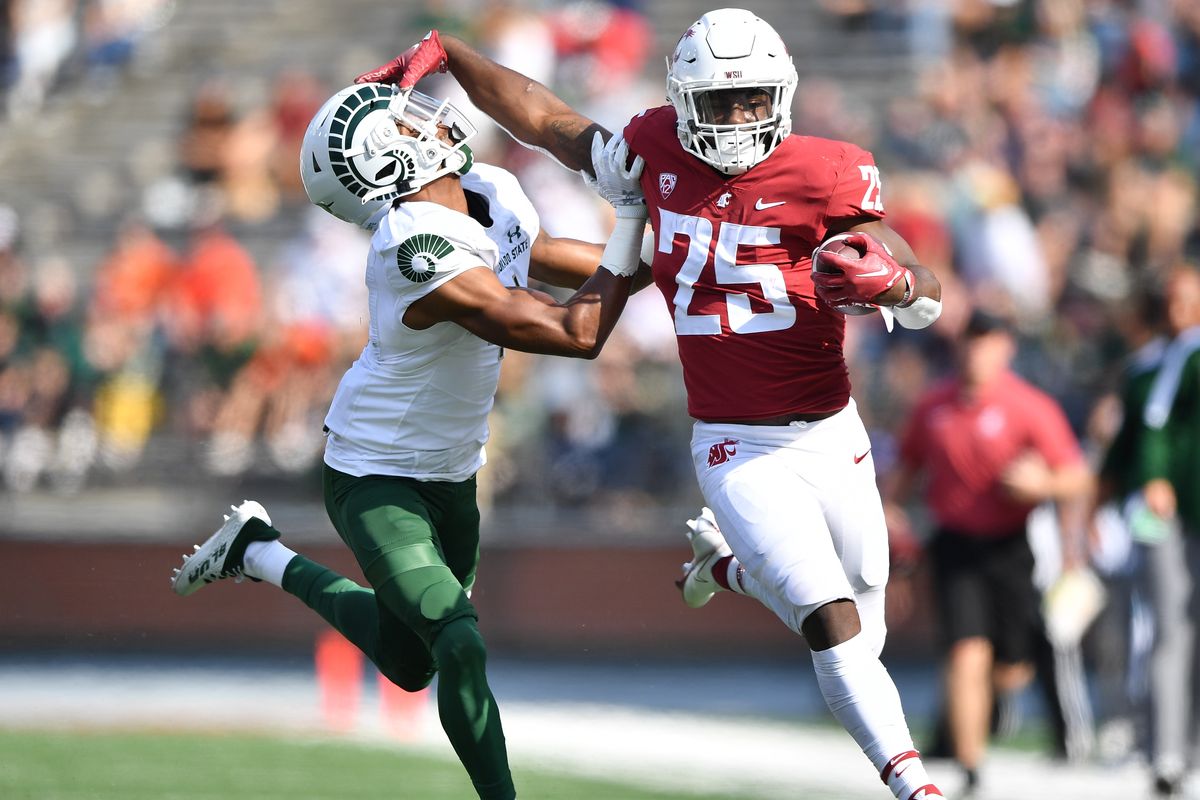 Washington State Cougars running back Nakia Watson (25) shakes a tackle from Colorado State Rams defensive back Angel King (4) during the first half of a college football game on Saturday, Sept. 17, 2022, at Martin Stadium in Pullman, Wash. (Tyler Tjomsland/The Spokesman-Review)

PULLMAN – So much for a hangover.

Washington State scored three touchdowns in the first quarter en route to a dominant 38-7 win over Colorado State on Saturday, a week removed from an upset win over then-No. 19 Wisconsin.

The offense flashed early and stagnated in the second half. Again it was the defense leading the way.

The Cougars (3-0) totaled seven sacks, four three-and-outs and four fourth down stops in the win over the Rams (0-3).

Daiyan Henley is building a case for one of the best defensive players in the Pac-12, if not the country.

Henley has led the Cougars in tackles each game this season. He tallied 13 to go with three sacks and two forced fumbles on Saturday. On the season he has 30 tackles, four sacks, 7½ tackles for loss, two forced fumbles and an interception.

Another first-year Coug, Cameron Ward, completed 26 of 36 passes for 292 yards and four touchdowns. He found Donovan Ollie and De’Zhaun Stribling two times apiece for touchdowns in the first half.

Meanwhile, the Cougars rushing attack was clicking. Nakia Watson took eight carries for 74 yards, leading the backfield that totaled 27 for 148.

‘We had to be ready to burst out of the gate’: Washington State offense shows explosive potential, Cougar defense dominates in rout of Colorado State

PULLMAN – The football secured by his right hand, Kannon Katzer cruised into the end zone and took two steps before raising his left arm and pointing a single index finger toward the sky. | Read more

PULLMAN – Three years ago, Jay Norvell signed off on Daiyan Henley’s move to the defensive side of the ball at the University of Nevada. | Read more

13:29 – WSU 0, CSU 0: Daiyan Henley continues his strong start to the season with a tackle on the first play and sack on third down to force a 3-and-out.

12:26 – WSU 7, CSU 0: Cameron Ward and the Cougars ease down the field for a quick touchdown on a 19-yard pass from Ward to Donovan Ollie to cap the 4-play scoring drive.

Nakia Watson broke off a 23-yard run on his lone carry.

The Rams have -5 total yards after two possessions.

Cougars are outgaining the Rams 98 to -5 in the first five minutes.

5:30 – WSU 14, CSU 0: Cayden Camper misses a 44-yard field goal after the Rams drive stalls. CSU finally gets some offense going with the 10-play 48-yard drive, but don’t get any points to show for it.

3:24 – WSU 21, CSU 0: Cameron Ward finds De’Zhaun Stribling for another touchdown, this time a 19-yard pass over the middle.

Cougars drive 73 yards in five plays and show no signs of letting up. Two plays before Nakia Watson ran for a 39-yard gain to set up the touchdown pass.

Ward is 8 of 10 for 106 yards and three touchdowns in the first quarter. Watson has four carries for 65 yards. The Cougars are averaging 12.2 yards a play.

11:19 – WSU 21, CSU 0: The Rams drive into Cougars territory, but again are stopped and are forced to punt. WSU takes over on its own 18, having scored with ease on its first three possessions.

6:10 – WSU 28, CSU 0: Cameron Ward completes a 2-yard touchdown to Donovan Ollie and the Cougars score on their fourth-straight possession to start the game.

Cam Ward with TD pass No. 4, this one a goal-line strike to Donovan Ollie, who scores his second TD.#WSU running away with this one, up 28-0 on #CSU midway through 2Q.
244 yards of offense for the Cougs. pic.twitter.com/7BS1oSWq8W

2:16 – WSU 28, CSU 0: Cameron Ward is stripped and the Rams recover on the WSU 35, setting them up with a chance to score before halftime.

It’s the first Cougars drive to not end in a touchdown.

0:03 – WSU 28, CSU 0: Clay Millen is strip-sacked on fourth down by Daiyan Henley and it is recovered by Francisco Mauigoa. The Cougars take a knee to end the half.

Washington State dominated both sides of the ball to take a commanding 28-0 lead over Colorado State at halftime.

Cameron Ward completed 16 of 21 passes for 174 yards and four touchdowns to lead the Cougars to touchdown drives on its first four possessions of the game.

Meanwhile, the defense held the Rams to 82 total yards with four sacks and eight tackles for loss. Daiyan Henely leads the team with seven tackles, two sacks and a forced fumble.

The Cougars receive to start the second half.

The Cougars drove 70 yards in seven plays, but were unable to score a touchdown from the Rams’ 6-yard-line after three incompletions from Cameron Ward.

9:45 – WSU 31, CSU 0: Clay Millen heaves a deep pass on fourth down, which is effectively a terrific punt as WSU’s Jaden Hicks comes away with a diving interception inside the Cougars five.

The Cougars force its fourth 3-and-out of the game as the Rams have eight possessions without scoring. Their drives have gone: punt, punt, missed field goal, punt, punt, downs, downs, punt.

11:07 – WSU 31, CSU 7: Clay Millen stands in the pocket in the face of a WSU blitz and delivers the Rams first touchdown of the game with a 9-yard completion to Justus Ross-Simmons.

Bad decision by the Cougars quarterback, who were facing a third down and put their defense in a redzone situation.

Daiyan Henely continues to impress in his first season with WSU. The linebacker has a team-high 13 tackles with three sacks and two forced fumbles.

Programing note: WSU-CSU will air on Pac-12 Washington and streamed on the Pac-12 app until the conclusion of South Alabama and UCLA.

Washington State walked out of Madison, Wisconsin last week with an upset win. This time it will be Colorado State hoping to play party spoiler.

The Cougars (2-0) cap nonconference play against the Rams (2-0) of the Mountain West Conference today at 2 p.m. on Pac-12 Network. Entering as 17-point favorites according to VegasInsider, a win would secure WSU’s fourth nonconference sweep in the past five eligible seasons, excluding the shortened 2020 slate.

The spread has flipped since the Cougars knocked off then-No. 19 Wisconsin in Camp Randall Stadium as 17-point underdogs a week ago. The Rams don’t seem to pose the same threat stepping onto Gesa Field.

CSU was battered by Michigan 51-7 in Week 1, allowing seven sacks and scoring drives on 8 of 10 Wolverines possessions.

It didn’t get much better in Week 2.

To boot, MTSU was blown out by recently FCS-promoted James Madison 44-7 in Week 1.

Washington State’s pass rush should get involved early and set up favorable field possession for Cameron Ward and the Cougars offense to get going after a sluggish start to the season. A dominant win could even see the Cougars crack the top 25 come Monday.

Redshirt freshman Jaden Hicks will make his first-career start for #WSU today at strong safety in place of Lee.
Hicks is listed as the backup FS, but he cross-trained at both safety spots throughout the preseason. https://t.co/ChxKky0nGB

#WSU arrives ahead of its 2 p.m. tilt with #CSU.
Fine day for outdoor festivities pic.twitter.com/Onb7XqXfjf

#CSU has allowed 16 sacks this year – more than any team in the FBS. #WSU, as you know, is well-stocked with talent on its defensive front.
“These guys specialize in passing and I think we have to take advantage of our defensive line.” pic.twitter.com/KLVorpU3uS

The Cougars and Rams have met once before in a New Mexico Bowl WSU fans would want to forget.

Second-year coach Mike Leach and the Cougars scrapped to their way to the school’s first bowl appearance in 10 years and had the game all-but-won with a 35-13 lead in the second quarter. Instead they’d lose in dreaded “Coug-it” fashion.

CSU scored 10 points in the final minute of the first half, rattled off a 75-yard run in the third and outscored WSU 18-7 in the fourth quarter.

The win sparked a run of five-straight bowl appearances for CSU, which hasn’t returned since 2017 and finished 5th in the Mountain West a season ago. The Cougars went 2-4 in bowl games under Leach.

‘We’ve barely scratched the surface’: Washington State looks to build on its momentum in nonconference finale versus Colorado State

PULLMAN – Last weekend, Washington State had an impressive performance on a bright stage and raised the expectations surrounding its program. | Read more

The pick: Why Washington State will beat Colorado State

PULLMAN – The Washington State Cougars have momentum at their backs coming off their big road win over a ranked Wisconsin team. The Colorado State Rams are hoping to spoil the fun. | Read more

‘It was a surreal feeling’: WSU rookie Jaylen Watson decides a quarterback showdown between the Chiefs and Chargers

Three years ago, Jaylen Watson was working for his mother at a Wendy’s in Augusta, Georgia. He was making $7.50 an hour and getting his grades in order. On Thursday, he was the most important player on the field for Kansas City, though one that few had heard of. | Read more