A GRIP ON SPORTS • Where were we? Oh, yes. Wondering if we made the baseball gods mad with all this talk of the Mariners making the postseason. And wondering what part of the Pac-12 is the best. Same as always.

• It’s pretty easy to break the Pac-12 into three parts. Sort of like Gaul back in the day, right Julius? There are the mountain schools, from Utah to Arizona. And the California schools. Finally, the Pacific Northwest bunch. It’s been this way since the expansion more than a decade ago. 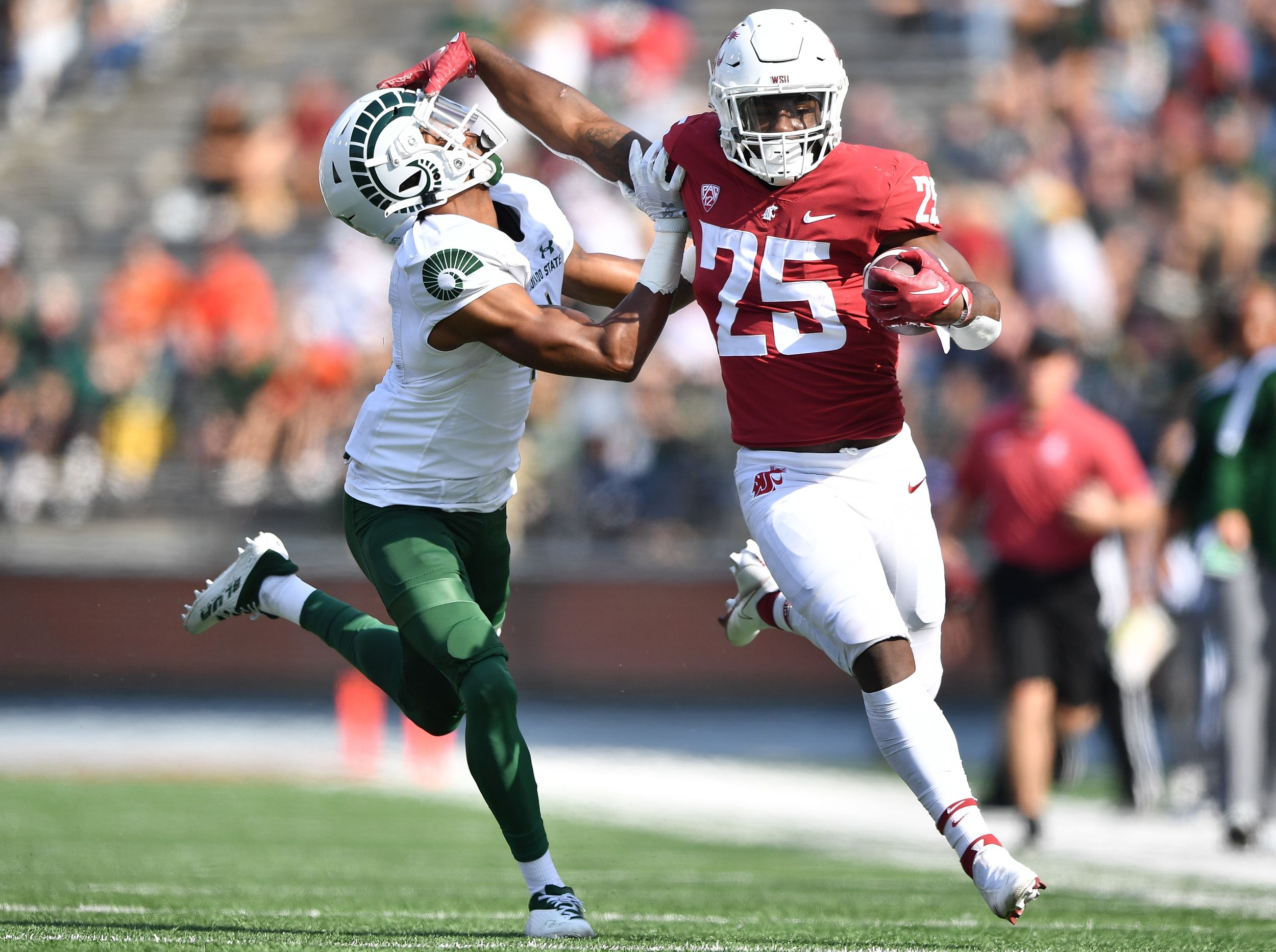 This year, however, there seems to be a changing of the guard, power-wise.

The mountains have turned blue and not because the beer is cold, though, with a 5-7 combined record, that’s probably happening as well. There has to be some way to drown the sorrows, especially in Colorado.

The Buffs are not just 0-3. They very well could be the worst Power Five school after losing 49-7 at Minnesota yesterday. And they may just be looking for a new coach soon.

But it isn’t just Colorado. Arizona State is 1-2 and lost by nine at home to Eastern Michigan on Saturday. Arizona is 2-1 though it took a comeback effort at home to top North Dakota State 31-28. And Utah, which still may be the Pac-12’s best, is 2-1 thanks to what looks to be a choke job to open the season in Florida.

The California schools? USC and UCLA are 6-0 combined, but the Trojans’ defense is still an issue and the Bruins have played a Charmin-soft schedule thus far. Stanford won yesterday because it had a bye. And California lost because it couldn’t corral a last-second Hail Mary, which seems appropriate at Notre Dame.

The four have a 9-2 record, with a win and loss coming against each other. That’s respectable, sure, though, as we said, UCLA’s mark is a mirage 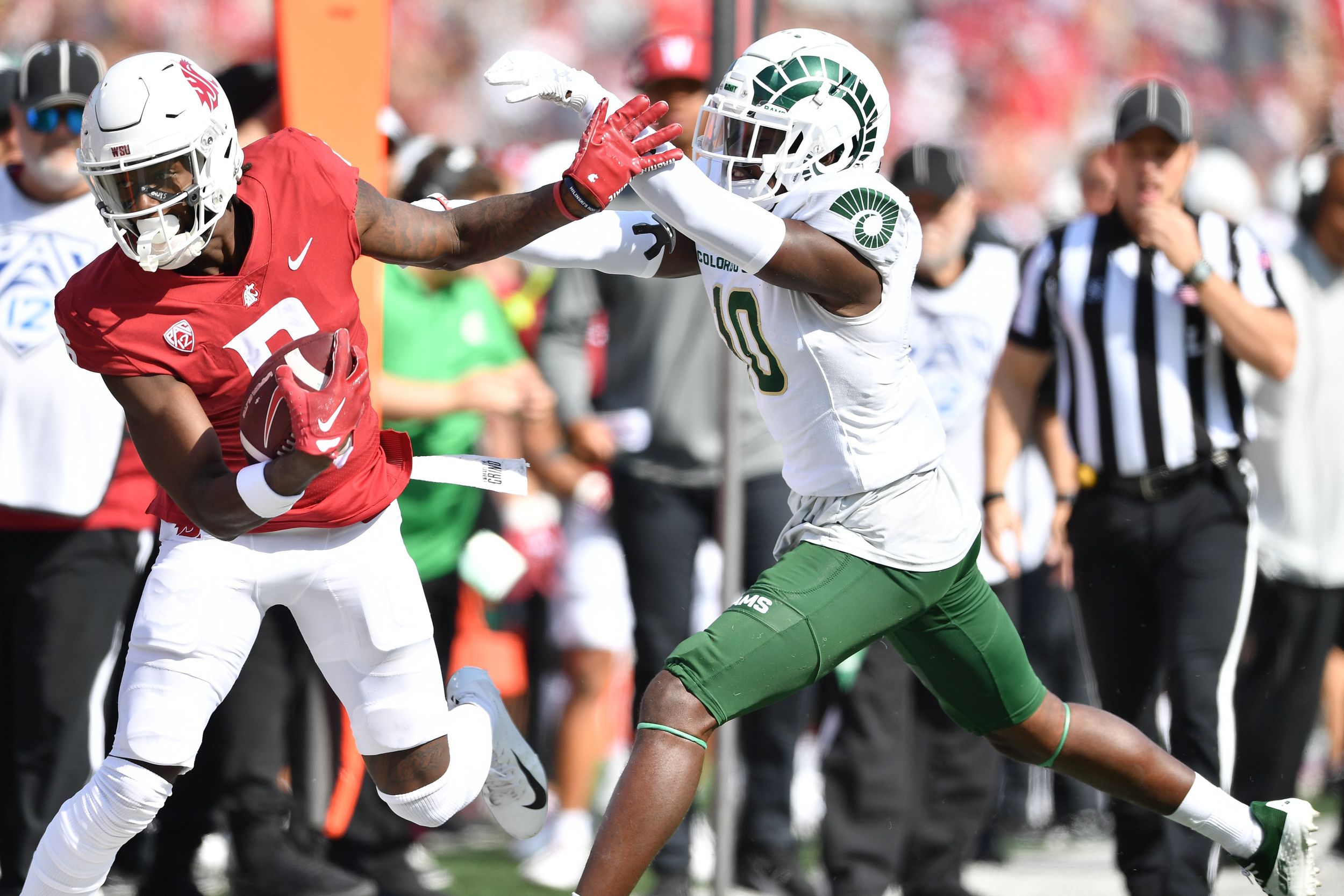 Yep, the Northwest schools have rolled through the nonconference schedule.

Washington State is 3-0 with a win at a ranked Wisconsin. Washington has returned to respectability under Kalen DeBoer, posting a 3-0 mark that includes yesterday’s 39-28 home win over No. 11 Michigan State. Oregon State has kept its momentum going, winning at Fresno State and finishing nonconference 3-0. Only Oregon, which topped 12th-ranked BYU 40-21 in Eugene on Saturday, has a loss and that was, as we said, to Georgia. OK, it was a blowout but still, one loss to the best team in the nation isn’t bad. 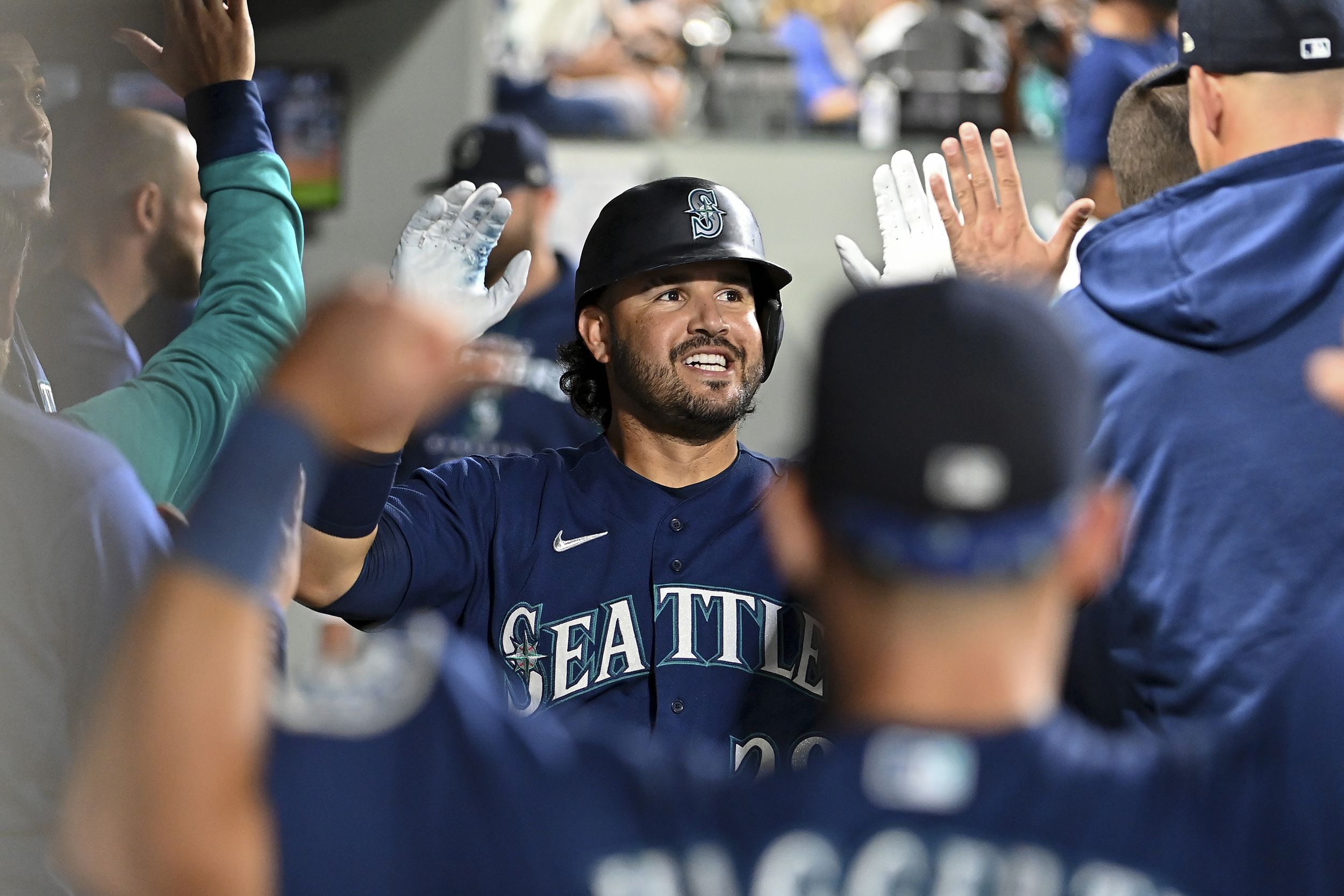 • We knew it was going to happen. All this talk about the M’s being a 99.7% lock to make the postseason was a challenge to baseball’s deities. And they love a challenge.

Remember that old Star Wars line. “Don’t get cocky kid.” Mariner fans began to get cocky. So here we are, on a Sunday morning in late September, and the three best hitters in the M’s lineup mysteriously all come up injured.

Mitch Haniger we understand. He has a bad back. Has had for a long time. It’s acting up. He’s out. But then Friday night Eugenio Suarez fielded a routine ground ball and broke a freaking finger? Really? That ain’t no coincidence, not on the same day the Times’ Larry Stone published a story explaining how these analytically based predictions work.

If you come for the king of postseason droughts, you better not miss. Or even give it a warning.

Because a few minutes before Saturday’s game in Anaheim, Julio Rodriguez is suddenly scratched from the lineup due to a bad back. What, Haniger is contagious? Can’t be. Except when you are challenging Mount Olympus.

OK, it’s not all that bad. The M’s have 18 games left. They are five games ahead of Baltimore for the final wild-card spot. It would take a meltdown of epic prop … no, we’re not going to do it. We’re not going to issue another challenge. Let’s just say the M’s are still in the driver’s seat and leave it at that. And cross our fingers. All of them. 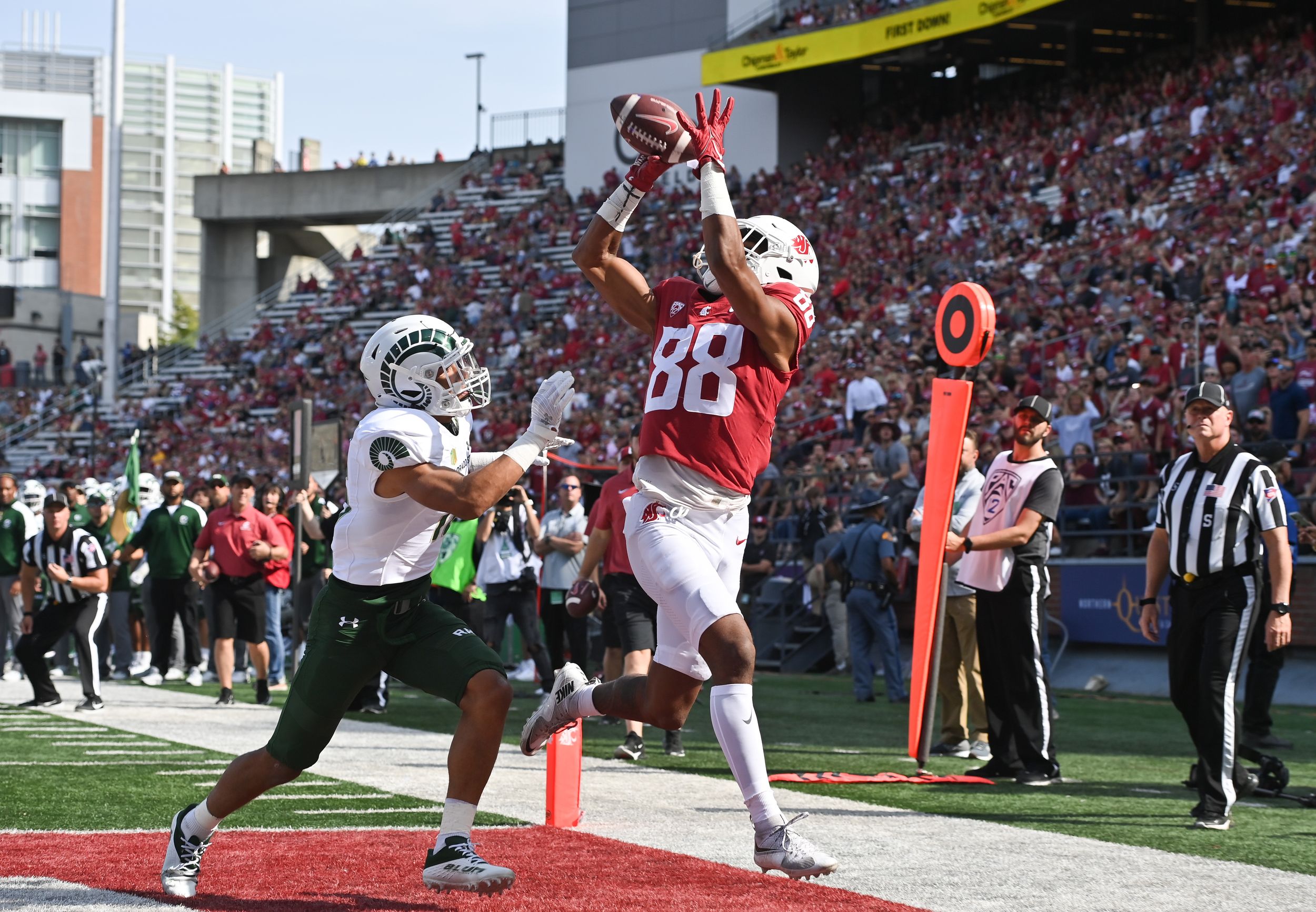 WSU: Now that’s how you dominate a struggling visiting team. The Cougars’ offense, a bit maligned in the first two wins, steamrolled Colorado State from the opening minutes as Washington State zipped to a 38-7 victory at Martin Stadium. Of course, Colton Clark was there and he has this game story. He also has a pregame story about injuries. … Theo Lawson was also in attendance and joins the fray with a story on Kannon Katzer’s first collegiate touchdown and another on Daiyan Henley’s outstanding game against his old coach. … There is also the difference makers story and, from the guys in the office, a recap with highlights. … Tyler Tjomsland was on the field and he has this photo gallery. … We also can pass along a story from the Denver Post. … Elsewhere in the Pac-12 and college football, the best win for the conference yesterday? It could be Washington’s 39-28 win over visiting Michigan State. The Spartans came in ranked 11th and the Huskies rolled over them. … Oregon also rolled a ranked foe, though BYU was a little hurt. Still, the Ducks played smash-mouth football in their convincing win. … Oregon State is 3-0 after pounding Montana State, a good FCS team. The Beavers will host USC next week with first place in the conference on the line. (Then again, there will be a lot of teams tied at the top unless the Trojans win.) … Is it possible the Buffs have already given up? Colorado didn’t even put up a fight at Minnesota. Though a new quarterback may have been identified. … Utah got a measure of revenge against San Diego State but this is this year and not last year. The Utes rolled behind a 21-point second quarter. … We were at UCLA’s 32-31 last-second win over South Alabama – Alan, for guessing right you win a 1974 AMC Pacer without an engine – and heard the alumni tell Chip Kelly to pack his bags. College football fans. Anyhow, the Bruins didn’t play well but won on a last-second field goal. … USC welcomed Fresno State to the Coliseum and then ran all over the Bulldogs. The Trojan offense under Lincoln Riley is still hitting on all cylinders. … Arizona State didn’t play well and lost to a similar team, Eastern Michigan. So, the Bruins have that going for them. The Sun Devils may not even have their coach for much longer. … Arizona picked up a win in a game they certainly would not have lost last season. … California led for most of the game in South Bend. And had a chance to tie late. But the Bears fell 24-17. … In basketball news, Chris Rastatter, who has officiated the Pac-12 for years, will be in charge of the nation’s officials this season. 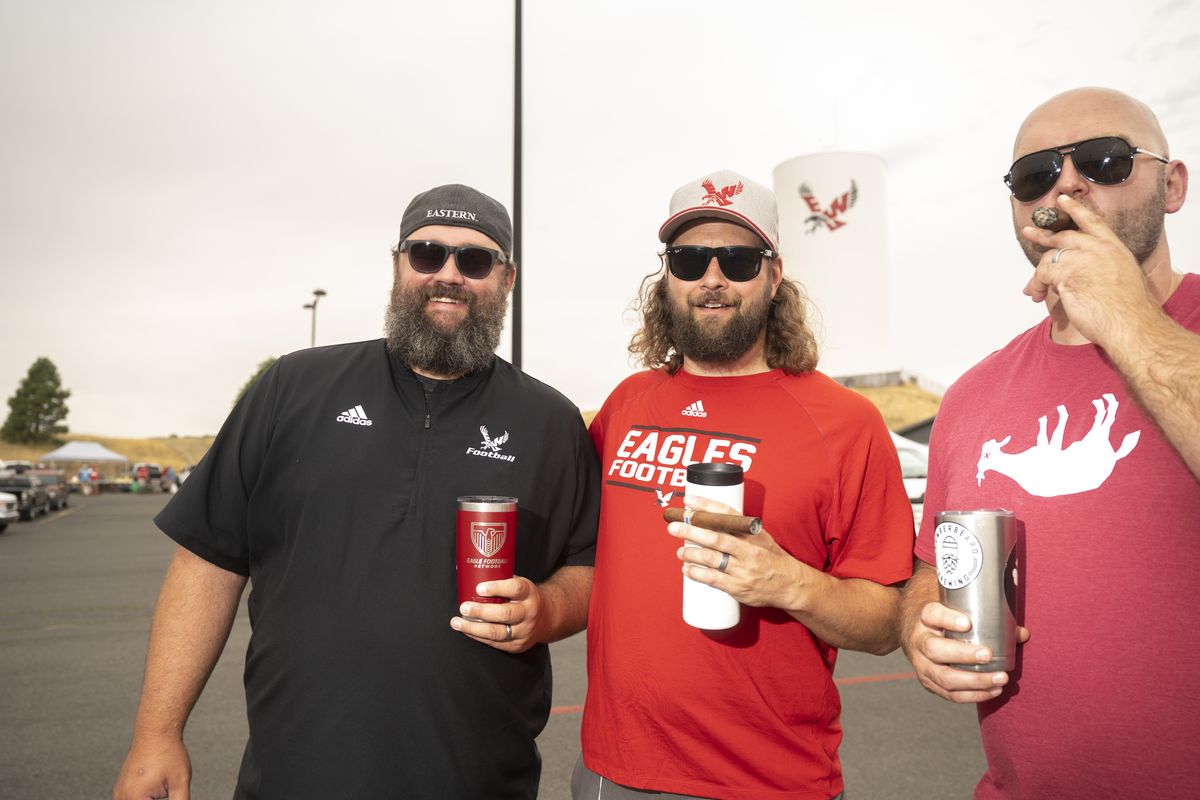 EWU: The Eagles had a bye Saturday but that doesn’t mean we can’t pass along a story. Dave Cook has this one, on three former teammates that have bonded even more in their middle age (and we’re sure they will be mad to be referred to as middle-aged). … Elsewhere in the Big Sky, Montana went on the road and showed its pretty darn good, defeating Indiana State 49-14. … We mentioned the Montana State loss against Oregon State above. It wasn’t close. … Northern Colorado also won on the road, topping Lamar 21-14. … South Dakota jumped ahead early and held off Cal Poly 38-21. … Central Arkansas dismantled an Idaho State team playing without its starting quarterback. … North Dakota rallied to defeat host Northern Arizona 27-24. … Sacramento State went on the road and defeated Northern Iowa 37-21. … Both Weber State and UC Davis scored in the 40s to easily win home games against in-state rivals. 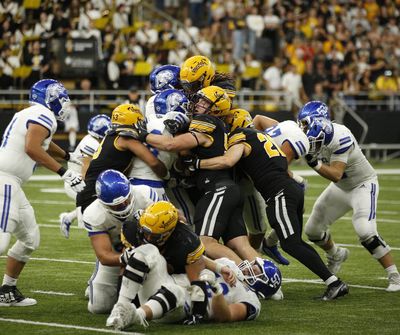 Idaho: The Vandals were in both of their first two games. But they were against teams that were just better. Yesterday they hosted Drake and showed who the better team was. UI won in a convincing manner, 42-14 in the Kibbie Dome. Peter Harriman was there and has this game coverage.

Whitworth: The Pirates rallied late, scored a touchdown in the waning moments and defeated Claremont-Mudd-Scripps 12-7 at the Pine Bowl. John Blanchette has the coverage. 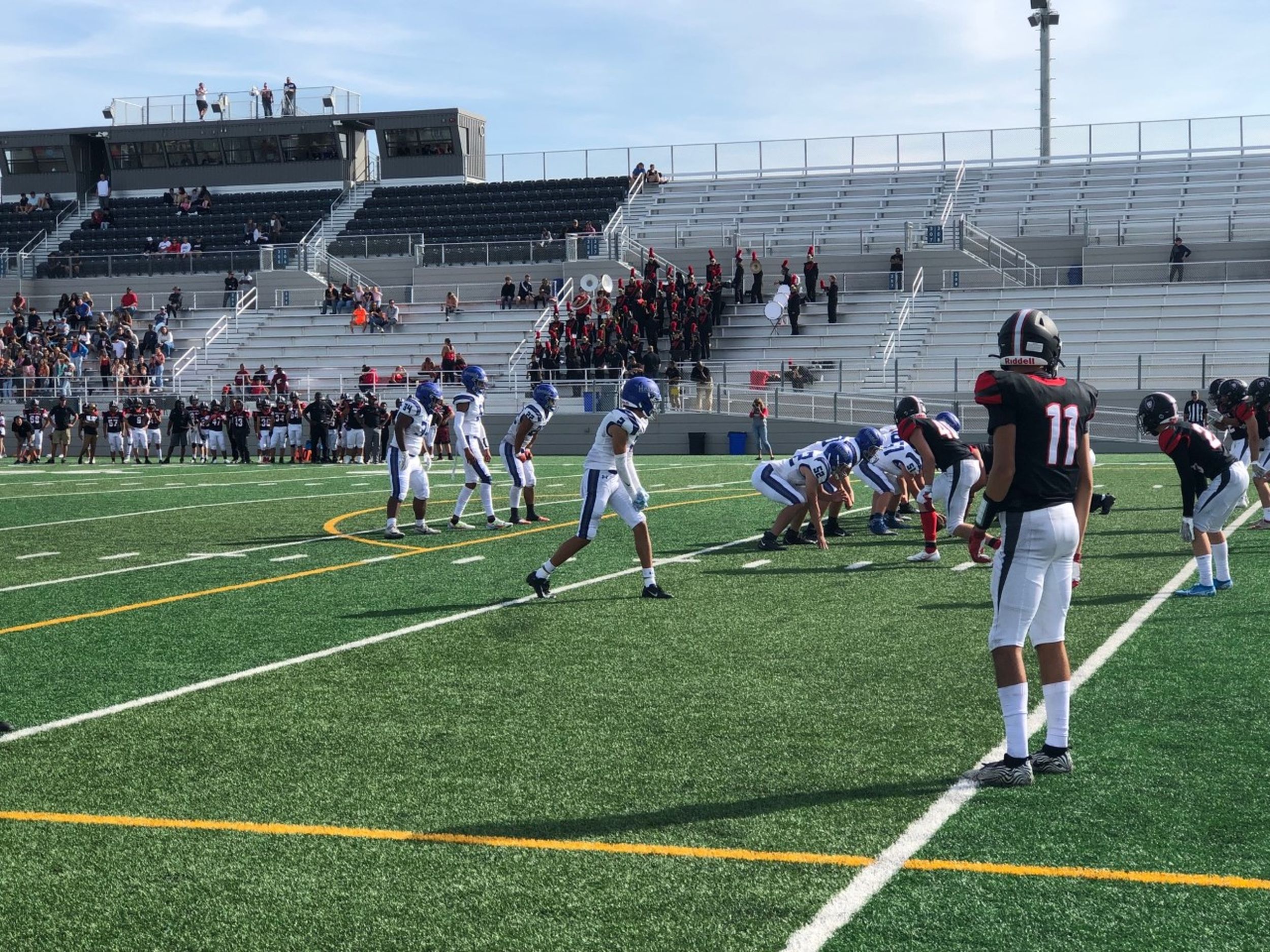 Preps: Just because it was Saturday doesn’t mean Dave Nichols ignored high school sports. Nope. He was at Union Stadium to watch North Central host Pullman in a game won by the Greyhounds 37-0.

Mariners: As we mentioned above, the M’s lineup was a bit bereft of bats. Three of the best hitters out? Shohei Ohtani on the mound for the Angels? No wonder the final was 2-1 in Anaheim. … It looks as if Eugenio Suarez will be out a while. He’s on the injured list. He’s been a key to Seattle’s success.

Seahawks: Gee whiz. Here we are, almost to the end of this column and we haven’t mentioned the 1-0 Hawks yet. Our bad. Then again, we’re not sure they will be in the game with the 49ers today. They are a huge underdog. … The weather is supposed to be rotten in Santa Clara. … Jamal Adams decided to make a speech. … Kenneth Walker III should play.

Sounders: Is it over yet? Not mathematically but last night’s 2-1 loss at Vancouver wasn’t what Seattle needed in its playoff chase.

• The rain pours down. San Francisco turns the ball over five times. The Hawks roll. Is that the scenario everyone else sees, except you Steven Karr? Until later …