A GRIP ON SPORTS • Where were you the last time the Seattle Mariners clinched a postseason berth? One thing is for sure, you were much younger. Twenty years younger. Heck, some of you may not even have been around.

• A two-decade-old drought should end this weekend. That’s the Dust Bowl of postseason droughts. A Mojave-desert one. Sahara-like. The current longest in North American professional sports. It’s about to end. Maybe tonight. Maybe Saturday. Or Sunday.

But one of the days this weekend. And you can watch it. If you don’t mind missing something else important.

The Mariners host Oakland starting at 6:40 tonight. The game, as usual, will be on Root. The usual time and place, in other words. But a conflict if you happen to be a fan of Washington football, as many are this year. After all, the Huskies are 4-0, seem to be returning to glory under first-year coach Kalen DeBoer and face a tough test. Tonight at 7 on ESPN, the face UCLA, also 4-0, in the Rose Bowl.

Two TVs may be necessary. 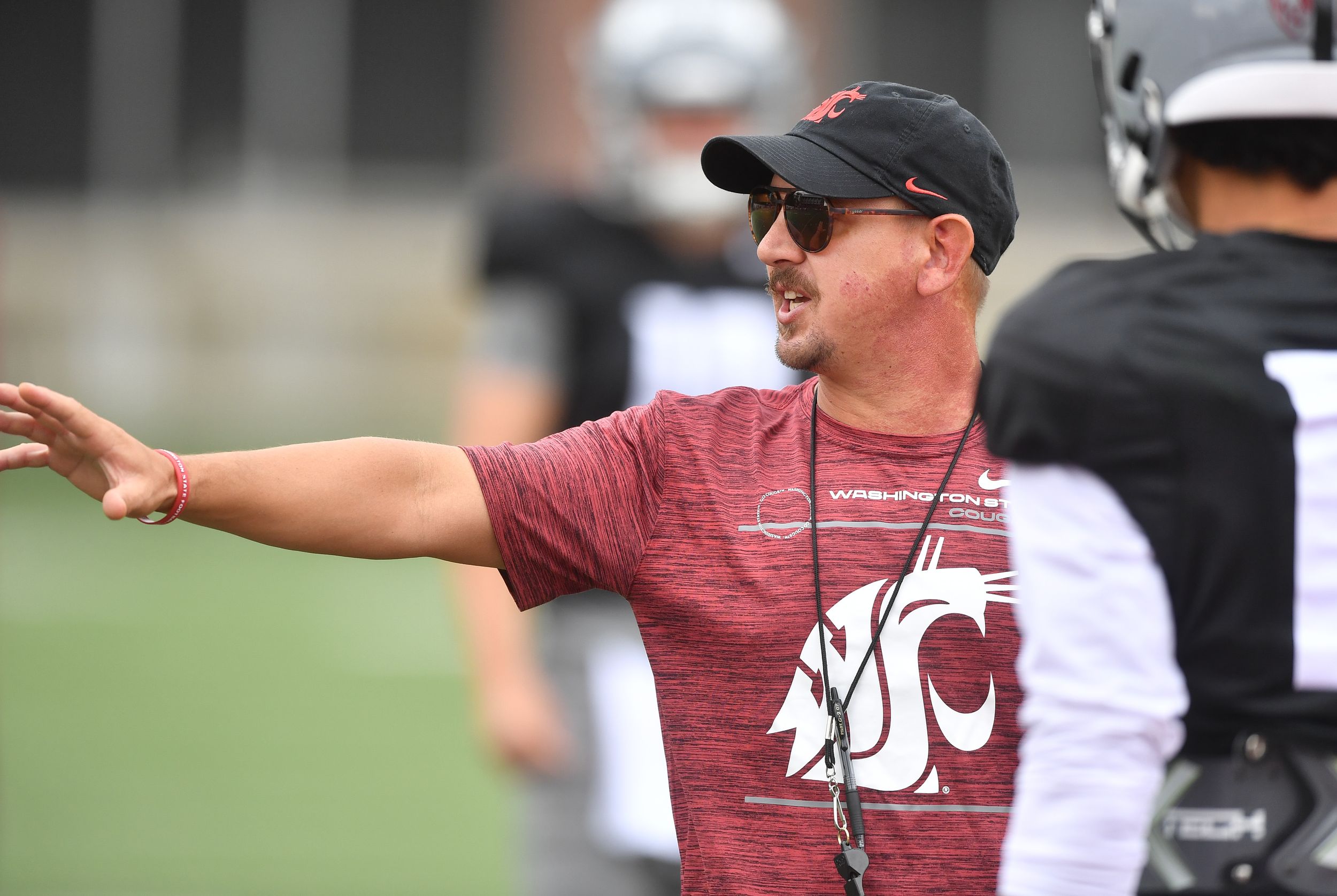 Say the M’s lose tonight. Baltimore wins. The clincher could come Saturday. In the afternoon. Of course, there is a conflict. The baseball game begins at 1:10 p.m. on Root. It should be in about the third inning when the Washington State football game against California kicks off at 2:30 on the Pac-12 Network. That will be a tremendous conflict for Cougar fans if they are part of the lucky few who actually have access to the Pac-12 Network. More than likely, though, they can turn on the M’s game, mute it and listen to Matt Chazanow and Alex Brink on the radio.

Say the unthinkable happens. The Mariners still haven’t clinched by Sunday. You are in luck.

They can save your day.

After watching the Seahawks lose at Detroit (10 a.m., Fox), you can get a much-needed pick-me up by switching to Root at 1 p.m. and watching them do something they haven’t done in two decades. We guarantee it. Waiting until Sunday after the Hawks show everyone in the Northwest the first pick in the NFL draft is within reach would be such a Mariner thing to do. The franchise has always been there for the fans in their darkest hours. Heck, for 35 or so of the past 45 years, the franchise has supplied many of those darkest hours.

This would be such a nice way to unwrap a postseason present that has been gathering dust in the corner since 2002.

• Jon Wilner shares something fun today. It concerns the Pac-12 and the conference’s open-door policy on egregious officiating errors. And, as one might expect, it stars the Cougars.

Of course it does.

Did you know the conference has spoken publicly five times about such matters since instituting a new policy in 2018? And of those five calls, the only Pac-12 school on the bad end of them has been Washington State?

Yep. Two of the five issues came in nonconference games, with the out-of-conference opponent holding the short end of the stick. The other three all occurred in games featuring WSU. And all three were at the Cougars’ expense.

The most egregious, of course, came at California in 2019 when a foul on the Bears – the son of a former WSU employee was caught holding on a kickoff – was assessed against the Cougars, costing them 57 yards of field position in a then-tight game.

The most memorable, however, occurred a year earlier. That’s when an obvious, and game-changing, targeting hit on Gardner Minshew was just ignored at the end of the 39-36 loss at USC.

The most recent? That came last week against Oregon when the officials lost track of the downs. And, despite going back a couple plays, never really fixed it.

Let’s summarize Wilner’s findings. In the past five seasons, five calls have risen to the level the conference feels it has to explain its football officials’ actions. Three times the school that got walloped was WSU – the only Pac-12 school on the short end in those calls.

And people wonder why WSU followers are paranoid. 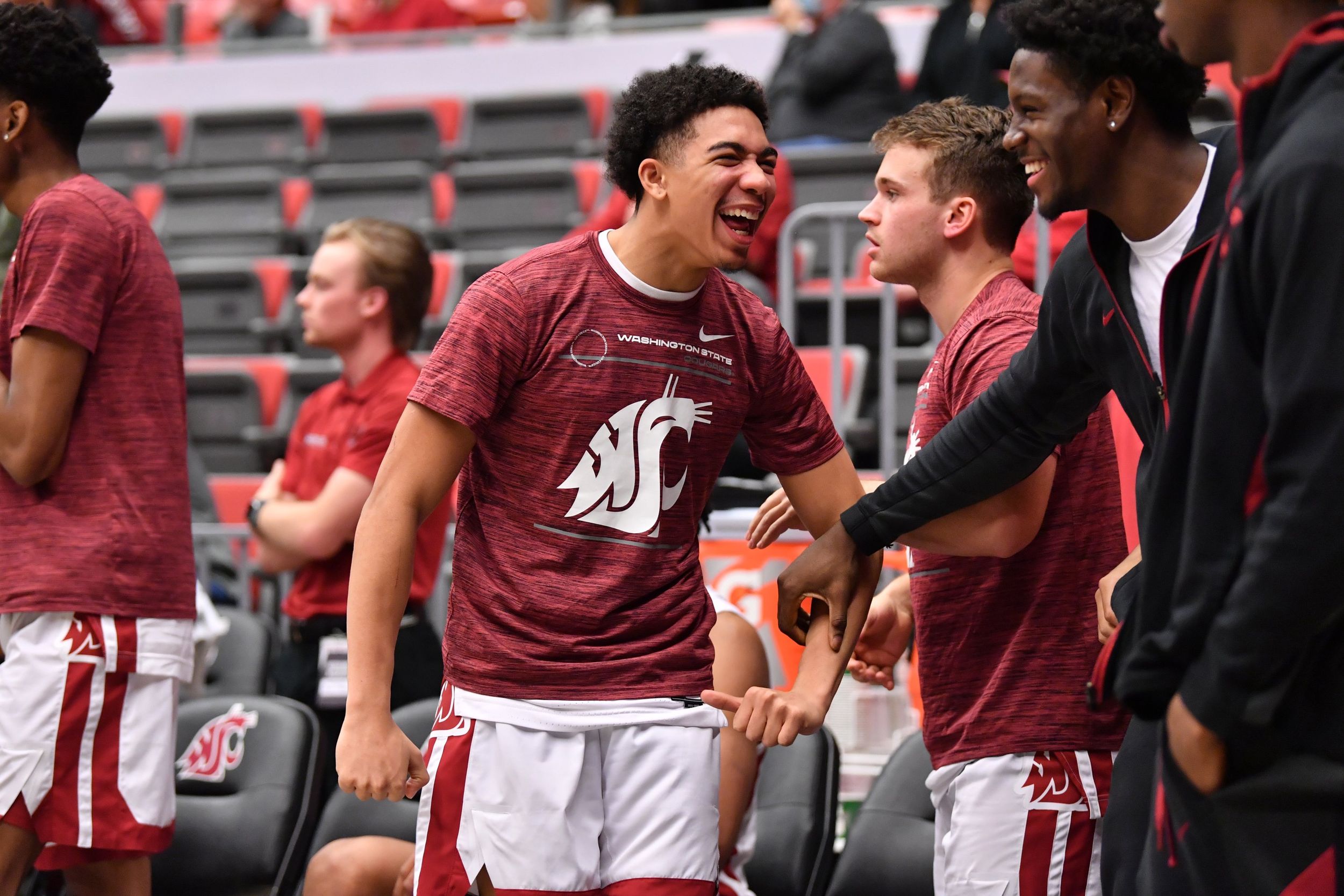 WSU: It’s been a while since we’ve heard from Cougar offensive coordinator Eric Morris. He spoke after practice Thursday. And let everyone know the offense is still a work in progress. Yep, we get it. Colton Clark relays what Morris had to say in this story. … Just a couple days ago basketball coach Kyle Smith let everyone know Dishon Jackson would miss some time with an unspecified injury. Yesterday, guard Miles Rice let everyone know he is battling Hodgkin’s lymphoma and will miss time to deal with the disease. Colton has that story as well. … Elsewhere in the Pac-12 and college football, we passed along Wilner’s picks yesterday. Here they are in the S-R. … Washington has struggled against UCLA recently, but new coach DeBoer has a history of success against the Bruins. If one game can be considered a history. By the way, the game is in the Rose Bowl. Why UCLA has such a long contract with Pasadena and hasn’t explored moving to So-Fi (just down the street from the Westwood campus) is beyond our comprehension. … If the past teaches us anything, it teaches us Stanford has a shot of upsetting Oregon on Saturday. It’s happened before. Recently. The Ducks know that and want some revenge. … Oregon State has a much tougher opponent. Utah also has some revenge on its mind. … Neither Colorado nor Arizona have tackled well thus far this season. Both will try to be better this week. … USC has done a lot well. Arizona State? The Sun Devils haven’t done much of anything. The Trojans hope to continue that. … In basketball news, Oregon adds a top junior college player to its roster.

Gonzaga: Drew Timme sat down with Fox Sports for an interview. He was his usual open self. 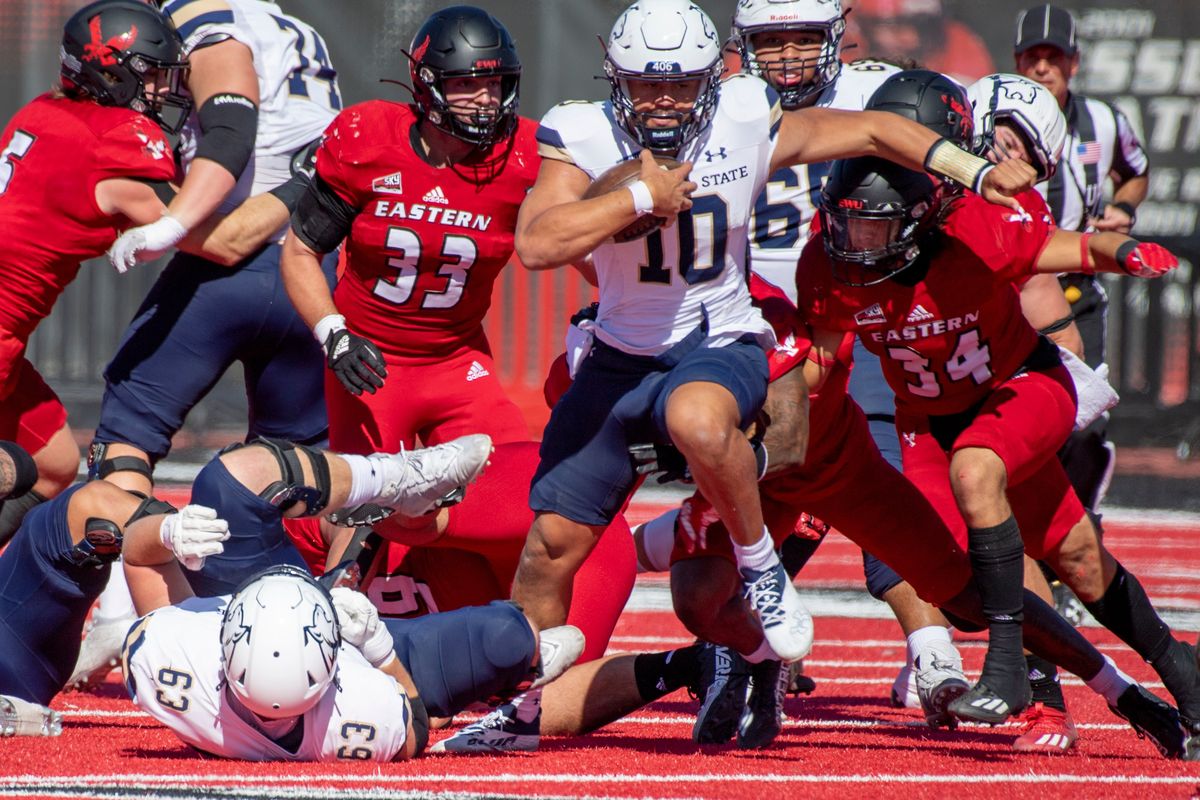 EWU: Much of the focus in these parts has been on whether the game itself would be played. The Eastern football team has been focused on something else. How to defeat Florida on Sunday morning. It is a tough task. Dan Thompson covers both those stories this morning. … Elsewhere in the Big Sky, the only winless conference team, Idaho State, faces the highest-ranked one, Montana. Will it even be close? … Weber State has the week off. … UC Davis is still focused on making the FCS playoffs. … Northern Arizona faces Portland State.

Idaho: Of all the players former coach Paul Petrino left behind in Moscow, none have been a bigger revelation for Jason Eck than quarterback Gevani McCoy. Peter Harriman has this story on a quarterback who just keeps improving.

Whitworth: The Pirates’ offense will have to rev it up Saturday if it wants to keep up with Lewis & Clark in a Northwest Conference matchup. Jason Shoot has a preview of Saturday’s contest in Portland. 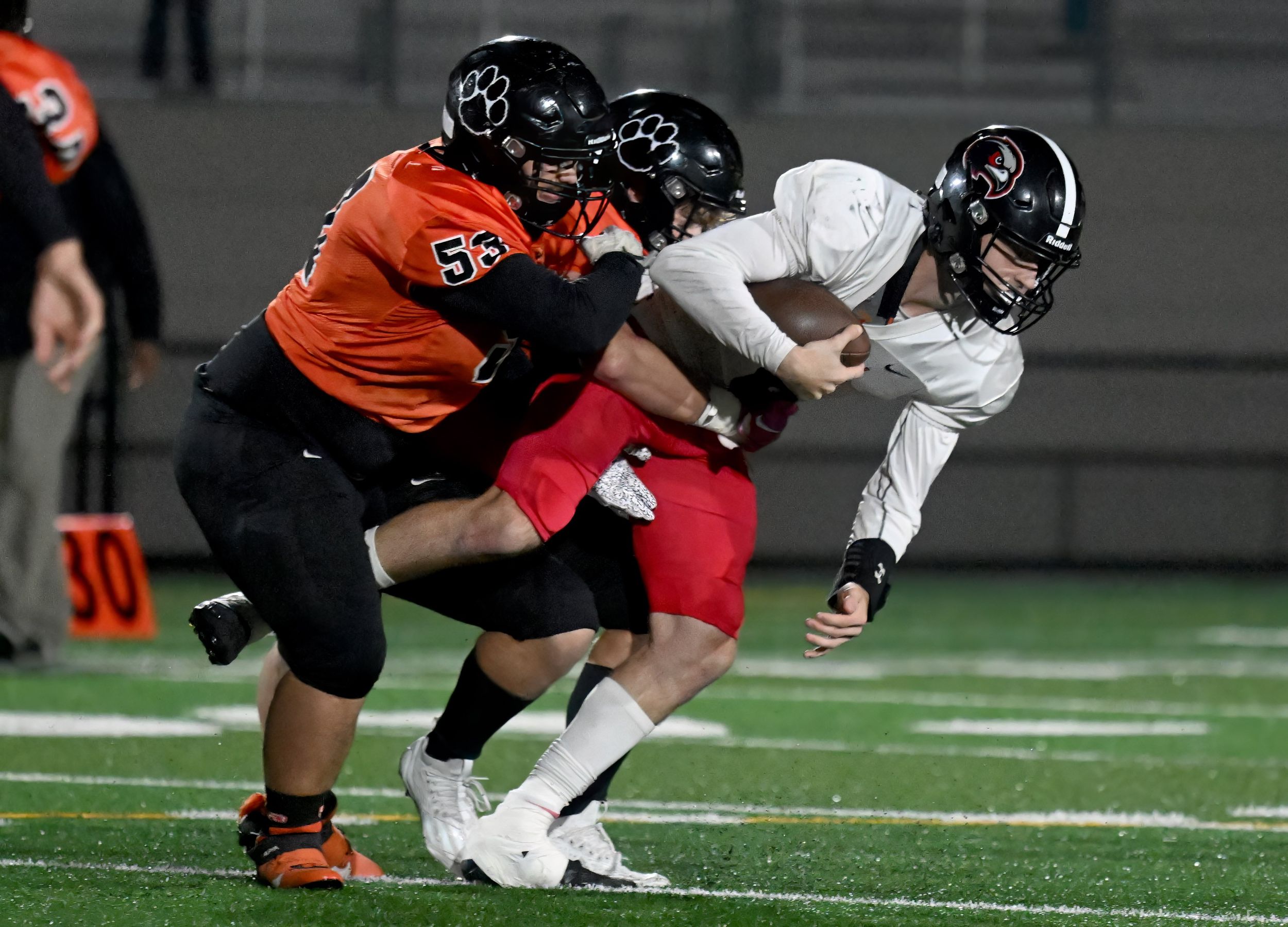 Preps: Dave Nichols headed out to Cheney last night to cover the lone GSL football game on the schedule. Lewis and Clark won 12-10. … Colin Mulvany was also there and has this photo gallery. … Dave adds a roundup of other action in the area.

Mariners: Seattle dropped the magic postseason number to one with a dramatic 10-9, 11-inning victory over the Rangers. The M’s also moved up to the second-wild-card spot and stayed in the tight race with Toronto for the top one. That last one remains their top goal. … Dave Boling has a story on Tom Hutyler, the P.A. announcer for the M’s. He’s a Ferris High grad and has been introducing the Mariners since 1987.

Seahawks: If you are of a certain age – read: old – you remember when the Hawks played in the AFC. And had intense rivalries with Kansas City, Denver and Oakland. … Seattle is effective on third down, except in the red zone. … Al Woods knows how to fix the run defense. … The 2021 draft class isn’t showing much just yet.

Sounders: Seattle has one more regular season match remaining and it may play without one of its best players.

• All the Mariners have to do is win one game. But they may take the field tonight already having clinched. Baltimore plays at New York tonight and the game may be over by the time Seattle hosts the A’s. If that’s the case, we’ll see how focused the young roster is. With so much – home field, easier path in the postseason – at stake, each game’s outcome matters. Win, then celebrate. We will see you again in October …