Miners in the Silver Valley picketed Monday outside the Wallace office of Hecla Mining Co. to protest lack of progress on a new contract for about 250 employees at the … 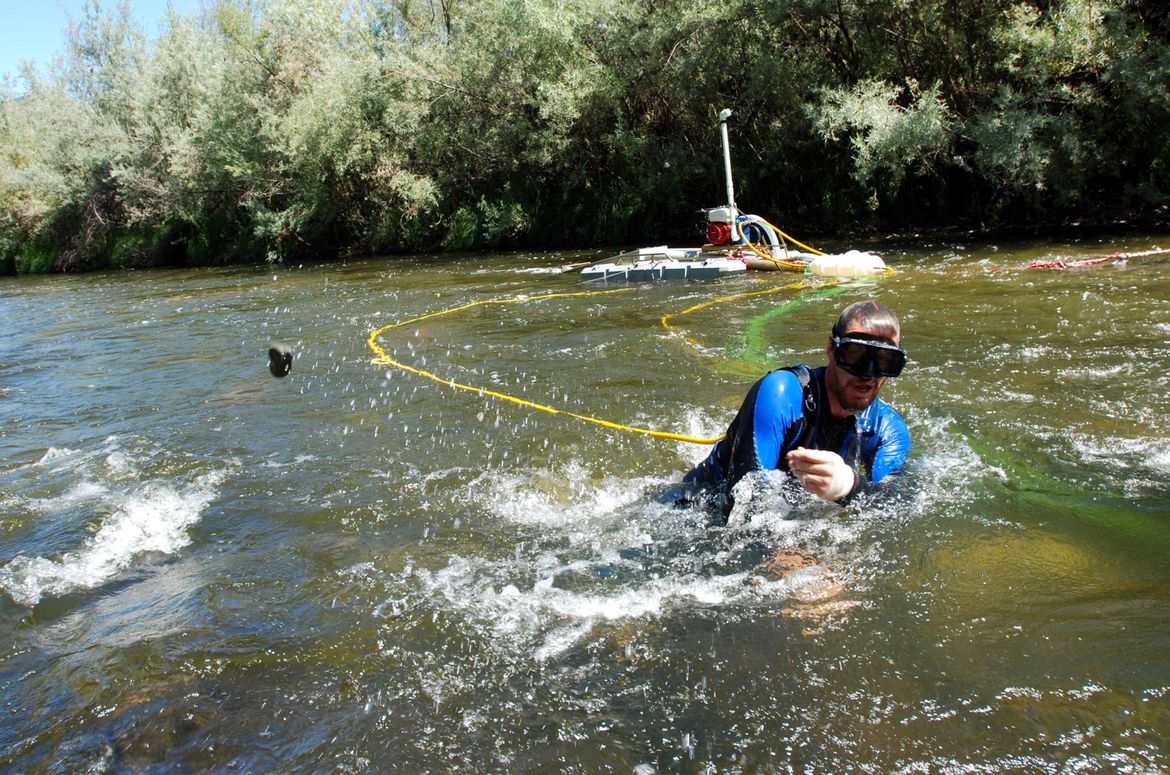 California’s ban on the use of suction dredges to extract gold from rivers is legal and not overridden by a 19th century federal law that allows mining on federal land, …

The owner of a Canadian smelter must pay the Colville Tribes about $8.3 million for legal fees and environmental studies related to ongoing litigation over the smelter’s discharges into the … 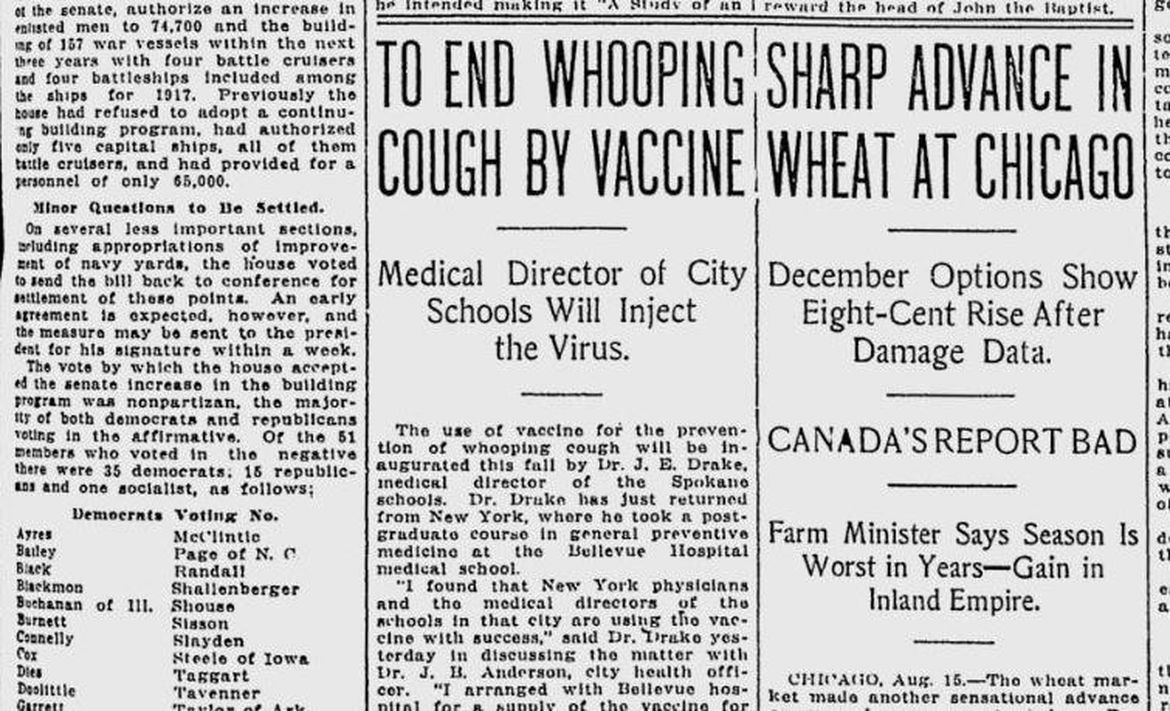 From our archives, 100 years ago The medical director of the Spokane Public Schools announced plans to vaccinate Spokane children against whooping cough.

A company has resubmitted its application to look for gold in Montana near the Yellowstone National Park border after state officials raised some concerns with the project. 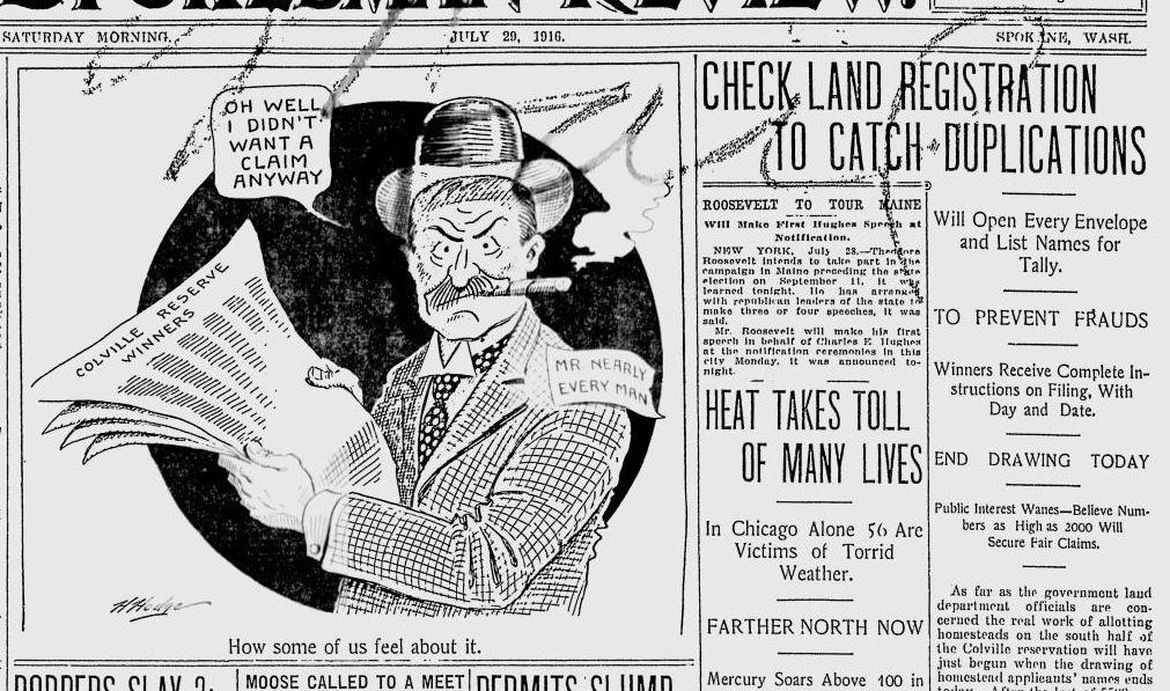 100 years ago in Spokane: Sisters among those winning lottery for Colville Reservation land

From our archives, 100 years ago The Spokesman-Review’s front page cartoon showed a man labeled “Mr. Nearly Every Man,” perusing the list of Colville Reservation land drawing winners. He had … 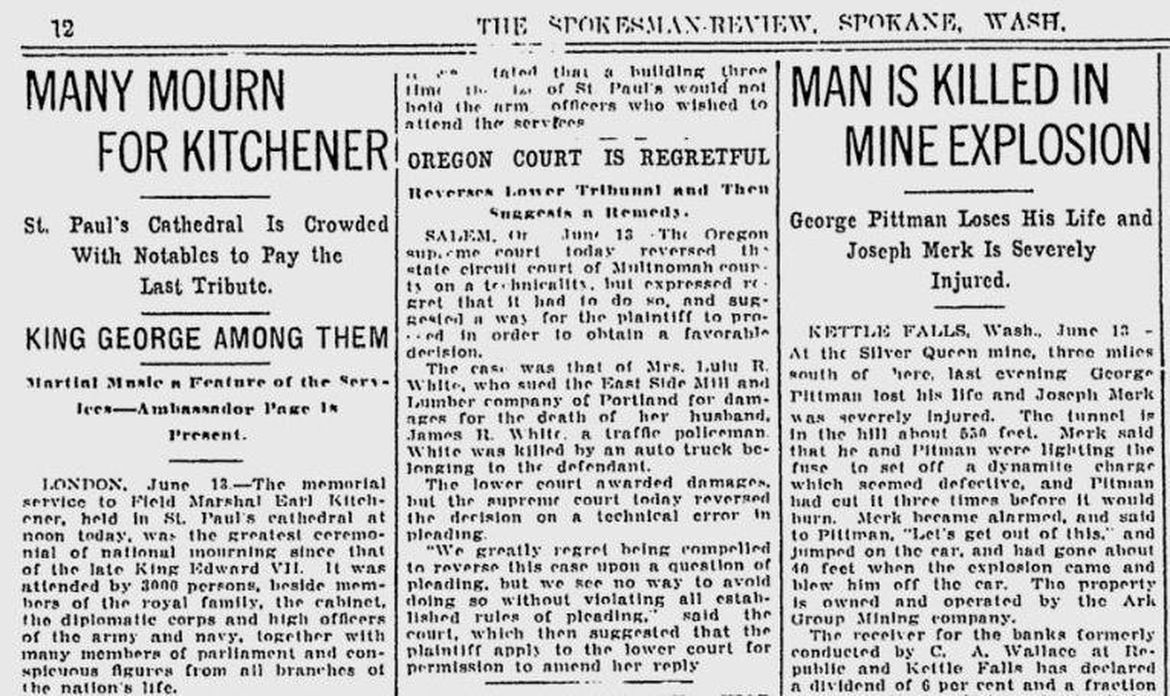 100 years ago near Kettle Falls: One man killed, another injured in mining accident

From our archives, 100 years ago Joseph Merk and George Pittman were working in the Silver Queen Mine, a few miles south of Kettle Falls, when they attempted to set …

The unanimous three-member commission imposed some restrictions on Ron Calhoon’s mining plans, including a prohibition on blasting and crushing and a requirement for safety vehicles on-site. 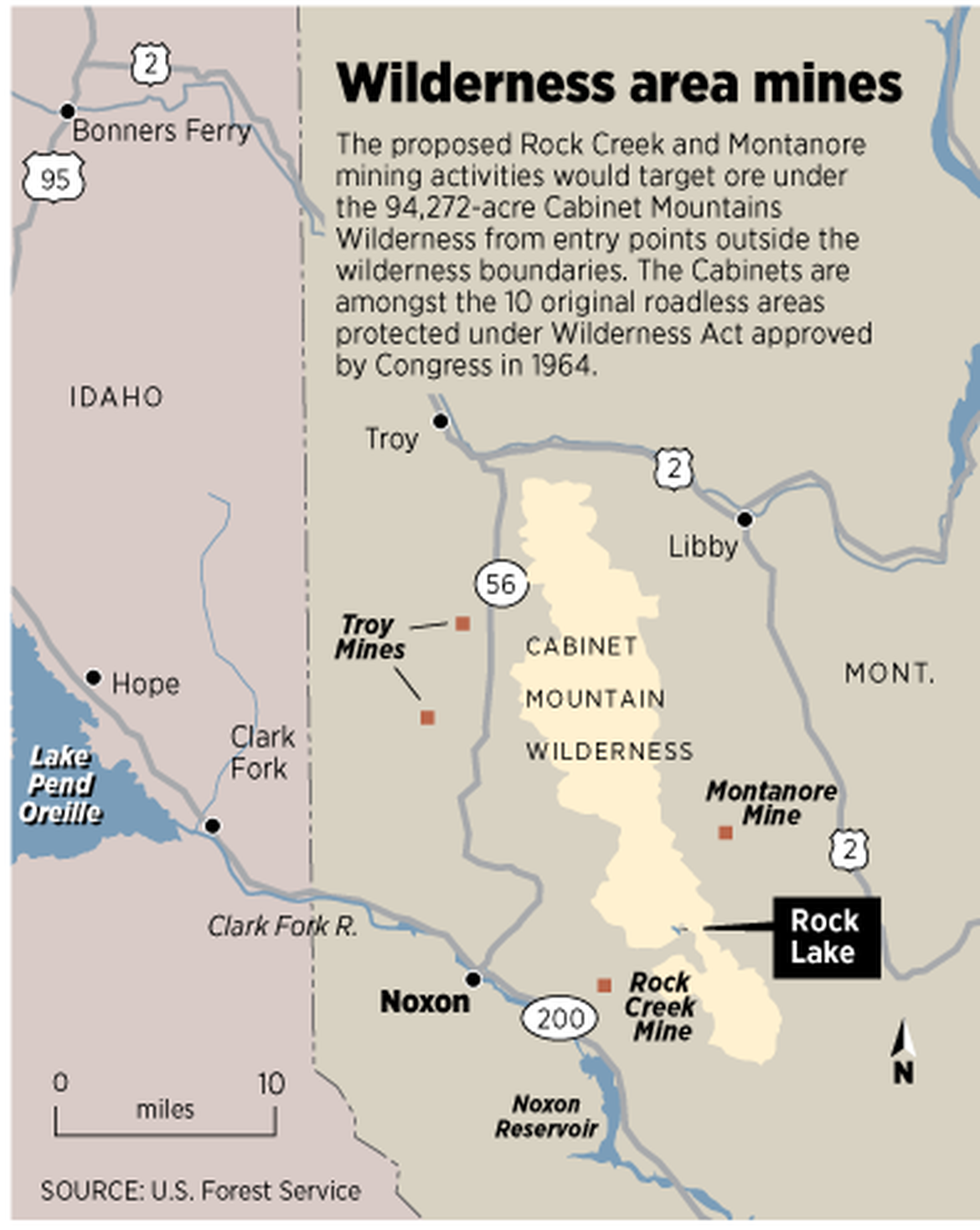 Hecla Mining Company plans to buy a major silver deposit in Northwest Montana that for decades drawn the interest of speculators and the ire of conservationists. 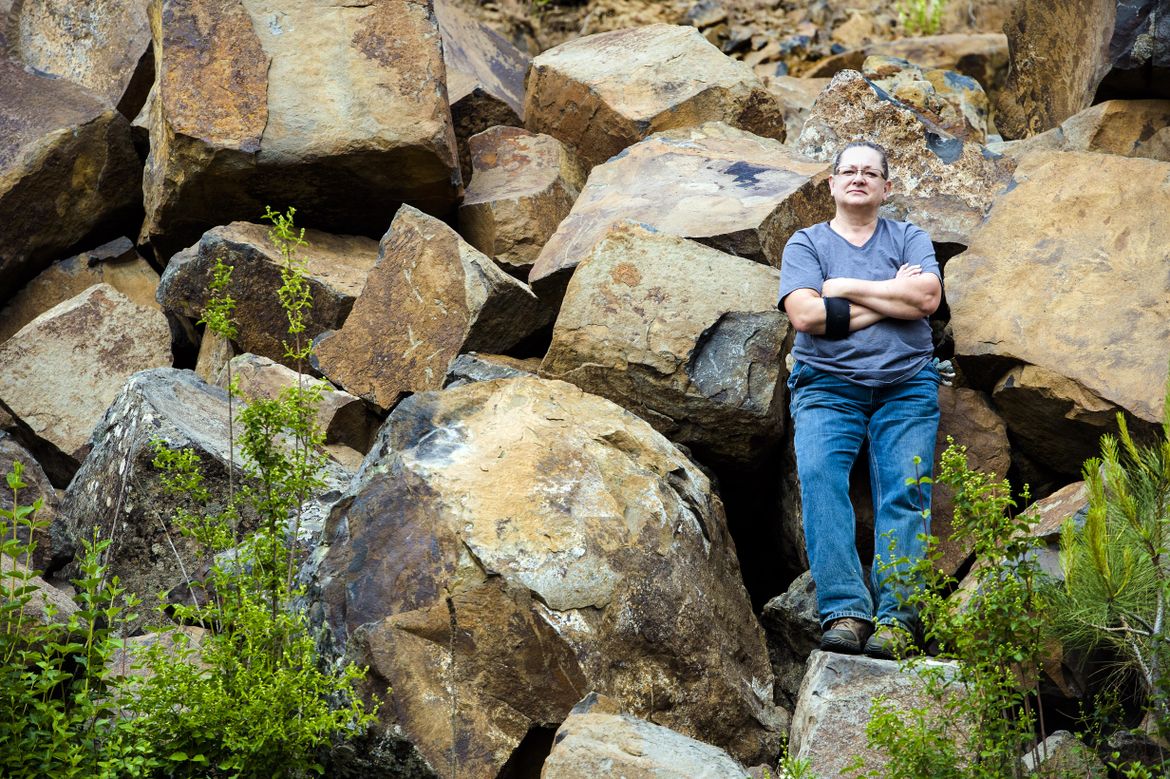 Residents along Brooks Road, a lightly maintained gravel street on the West Plains, have spoken out against plans by Ron Calhoun to mine basalt on his 70-plus acres. Calhoun says … 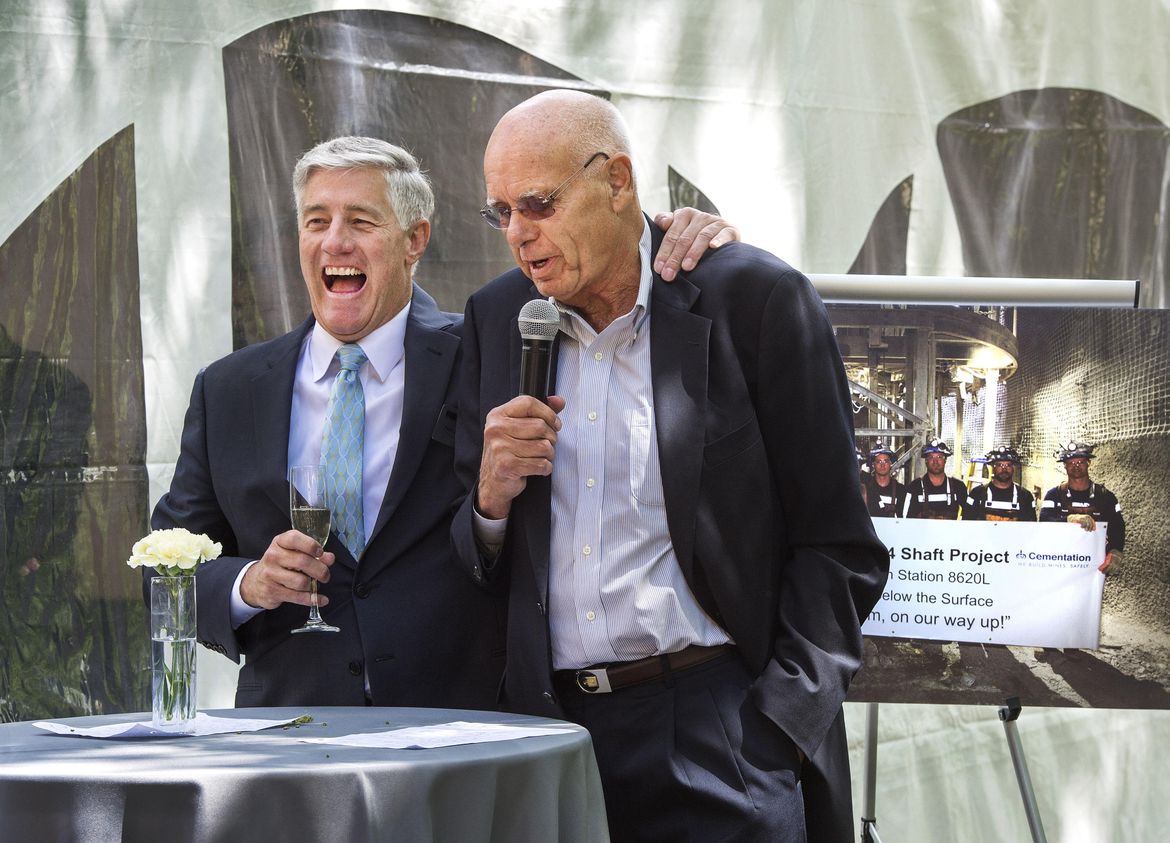 Hecla Mining Co., the last of the pioneer mining companies in the Silver Valley, celebrates is 125th anniversary this year.

Ex-coal CEO Don Blankenship due to report to prison

About 30 builders buried in landslide in southeast China

A landslide in southeast China on Sunday buried about 30 workers at the construction site of a hydropower project, an official said. 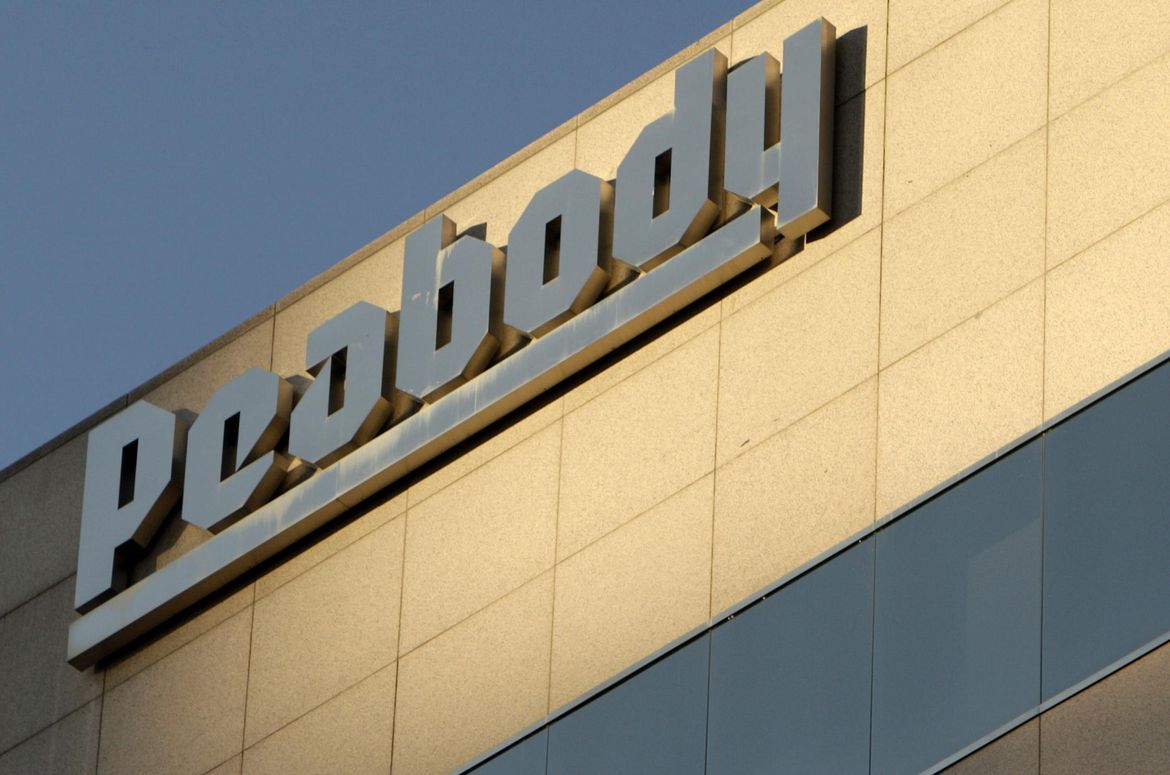 Peabody Energy, the nation’s largest coal miner, filed for bankruptcy protection Wednesday as a crosscurrent of environmental, technological and economic changes wreak havoc across the industry.

Environmentalists are challenging U.S. Forest Service approval of a $500 million copper and silver mine in northwest Montana, citing concerns from state officials that it could drain surrounding waterways and …

Peabody Energy warns it may file for bankruptcy protection

The largest American coal miner, Peabody Energy, is delaying an interest payment due this week and warned that it may have to file for Chapter 11 bankruptcy protection. 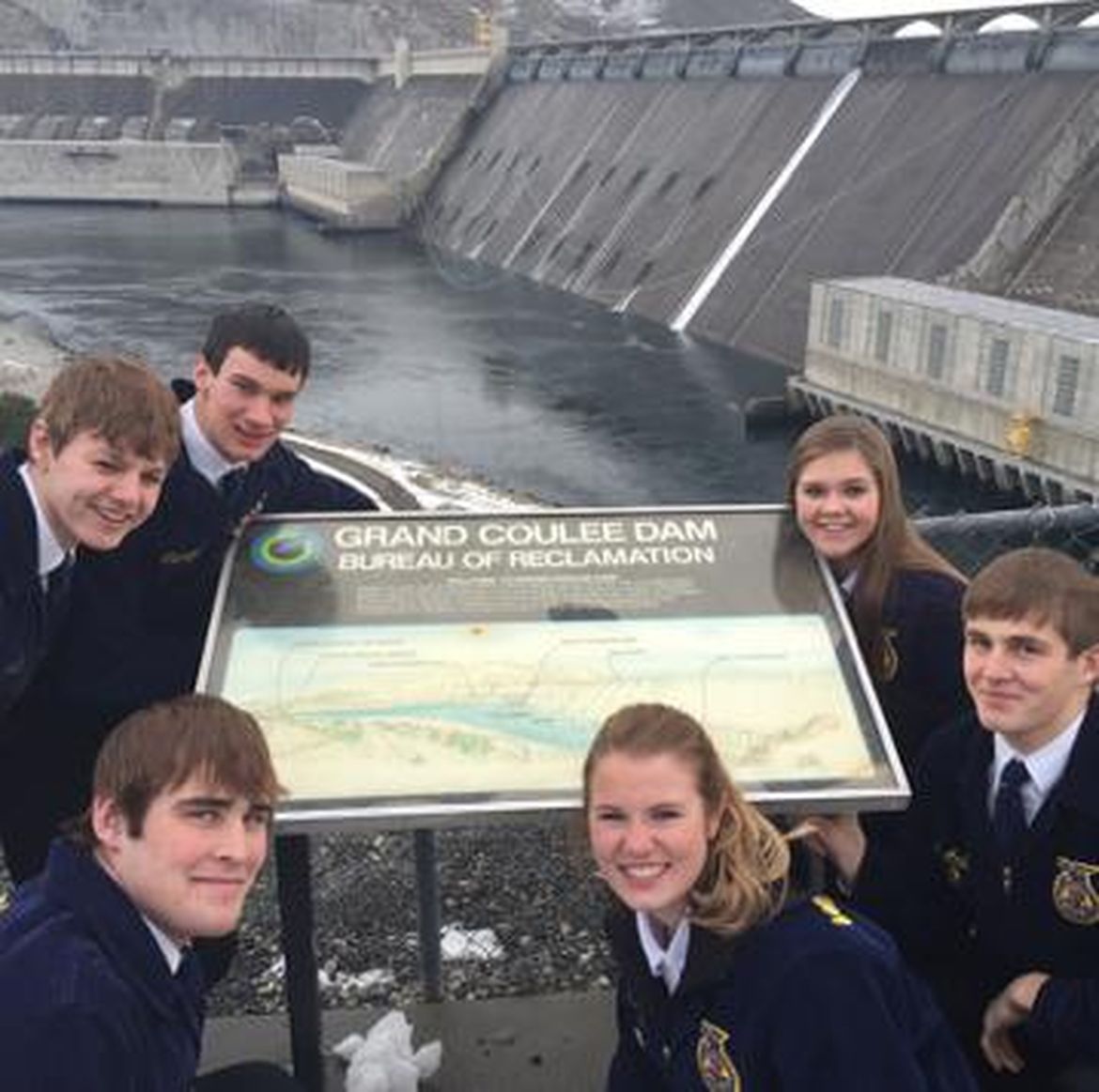 Unlike the “debaters” we’ve come to know on TV, a Reardan High School class is tackling natural resource issues without attempting to persuade, promote or ridicule. The students are researching …

Federal land managers have adopted a new policy aimed at capping pipes and plastic tubes on public lands that annually lead to the unintentional deaths of up to 100,000 cavity-dwelling … 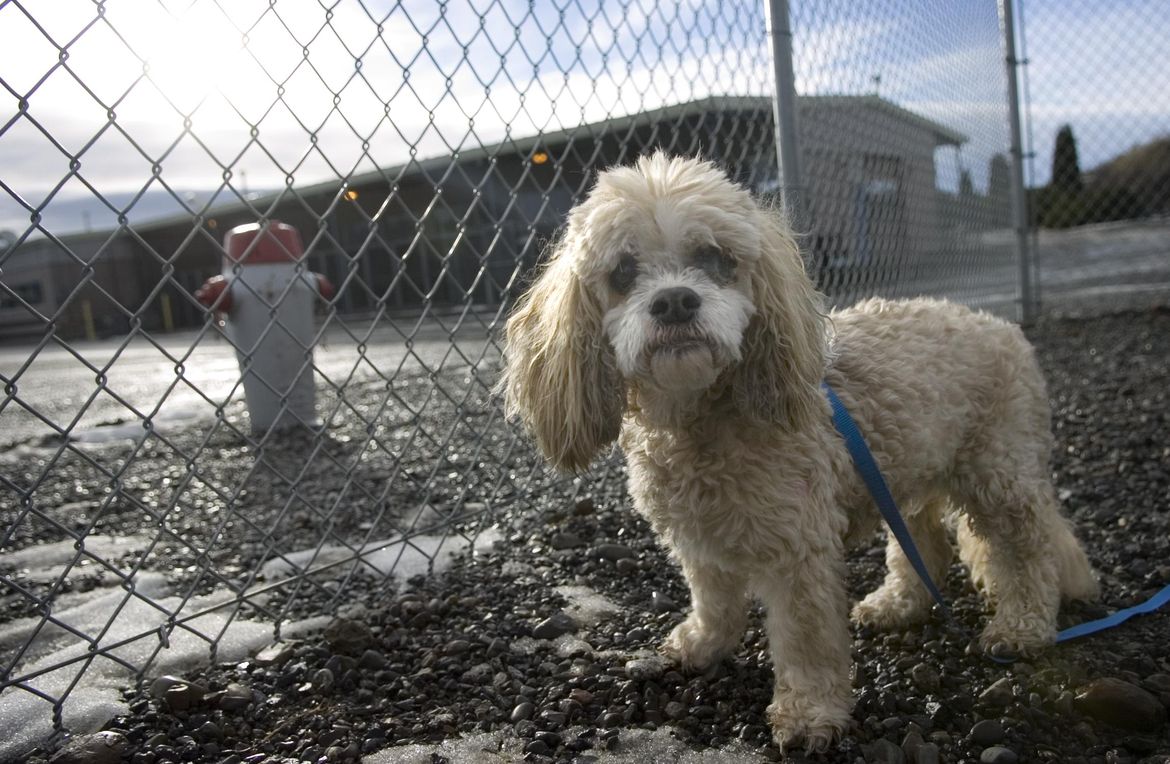 Spokane County will receive nearly $400,000 in cash and 20,000 tons worth of gravel in a deal to sell a former gravel site to Central Pre-Mix as it moves its …

Montana mine gets conditional approval due to water worries

Montana environmental regulators have partially approved a major silver and copper mine proposed beneath a federal wilderness area, casting uncertainty over the $500 million project near the Idaho border.

100 years ago in California: Spokane actor dies in stagecoach fall during filming

From our archives, 100 years ago Leslie Reed, a well-known actor in Spokane, died during a motion picture shoot near Santa Barbara. 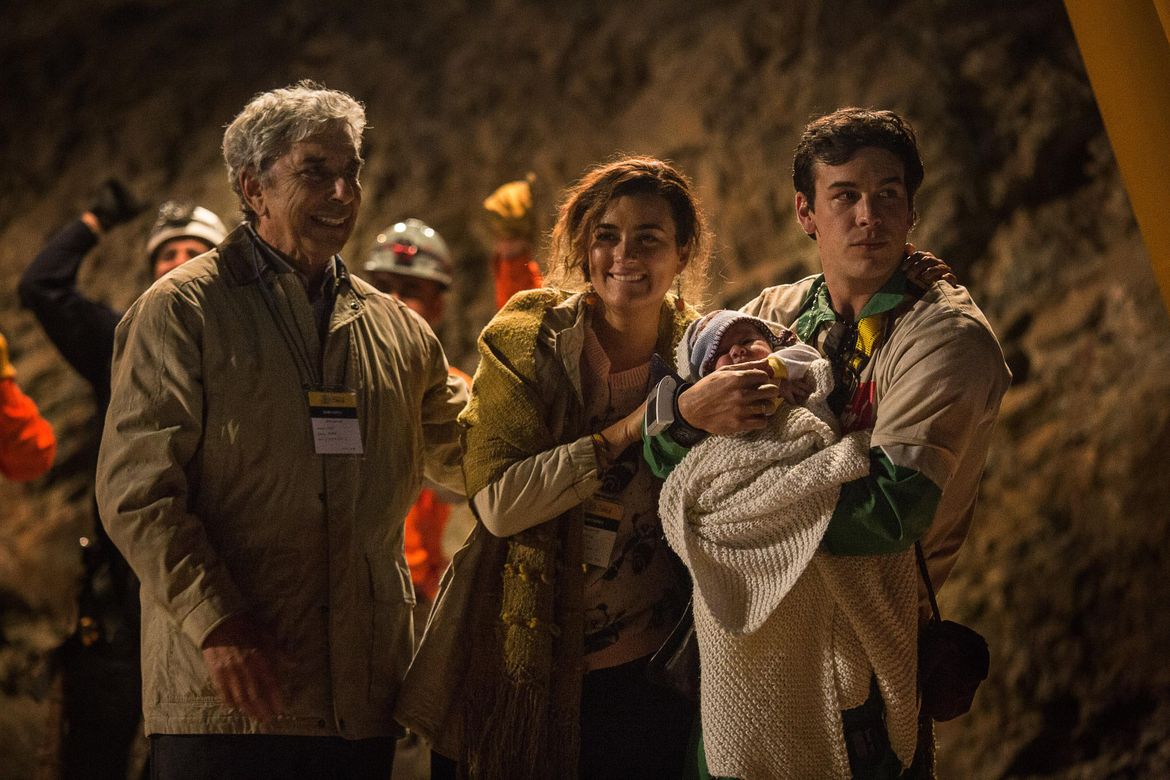 Movie review: ‘The 33’ is a formulaic telling of an amazing story

Going into “The 33,” we know a few things. We know it’ll be tense, and largely subterranean. We know it’s a bad-news/good-news story, in that order, about the 2010 mine …

From our archives, 100 years ago In an event with lasting repercussions for all Spokane nature lovers, John A. Finch, 61, pioneer Spokane mining man and businessman, died suddenly at …

A property owner will try again to establish a controversial basalt mining operation on his 78 acres in western Spokane County. But Don Howell, a retired real estate agent who’s …

An Australian mining company will conduct exploratory drilling this summer on the Idaho Panhandle National Forests near the Canadian border. MMG Ltd. is looking for zinc deposits in the Hall …

An Australian mining company will conduct exploratory drilling this summer on Forest Service land in Boundary County near the Canadian border. 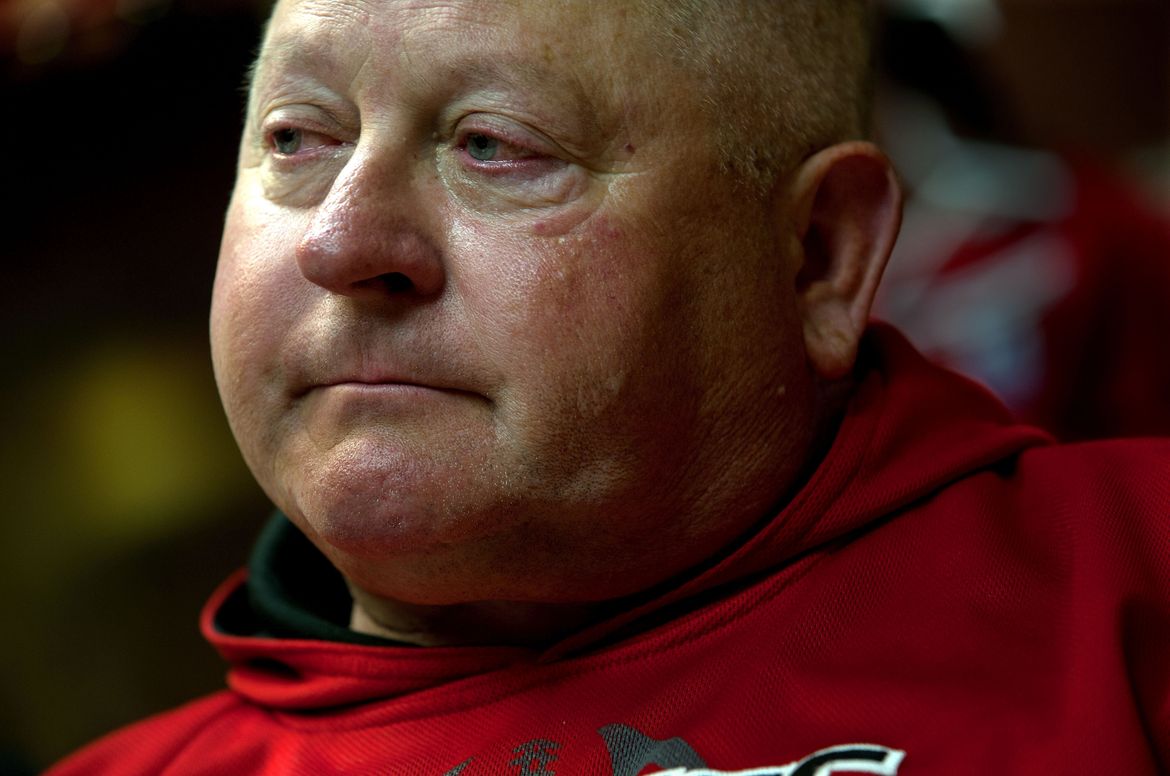 Nick Rounds followed his dad into Idaho’s silver mines, proud of the work and good wages that came with being a miner. “I know that my brother didn’t want to …