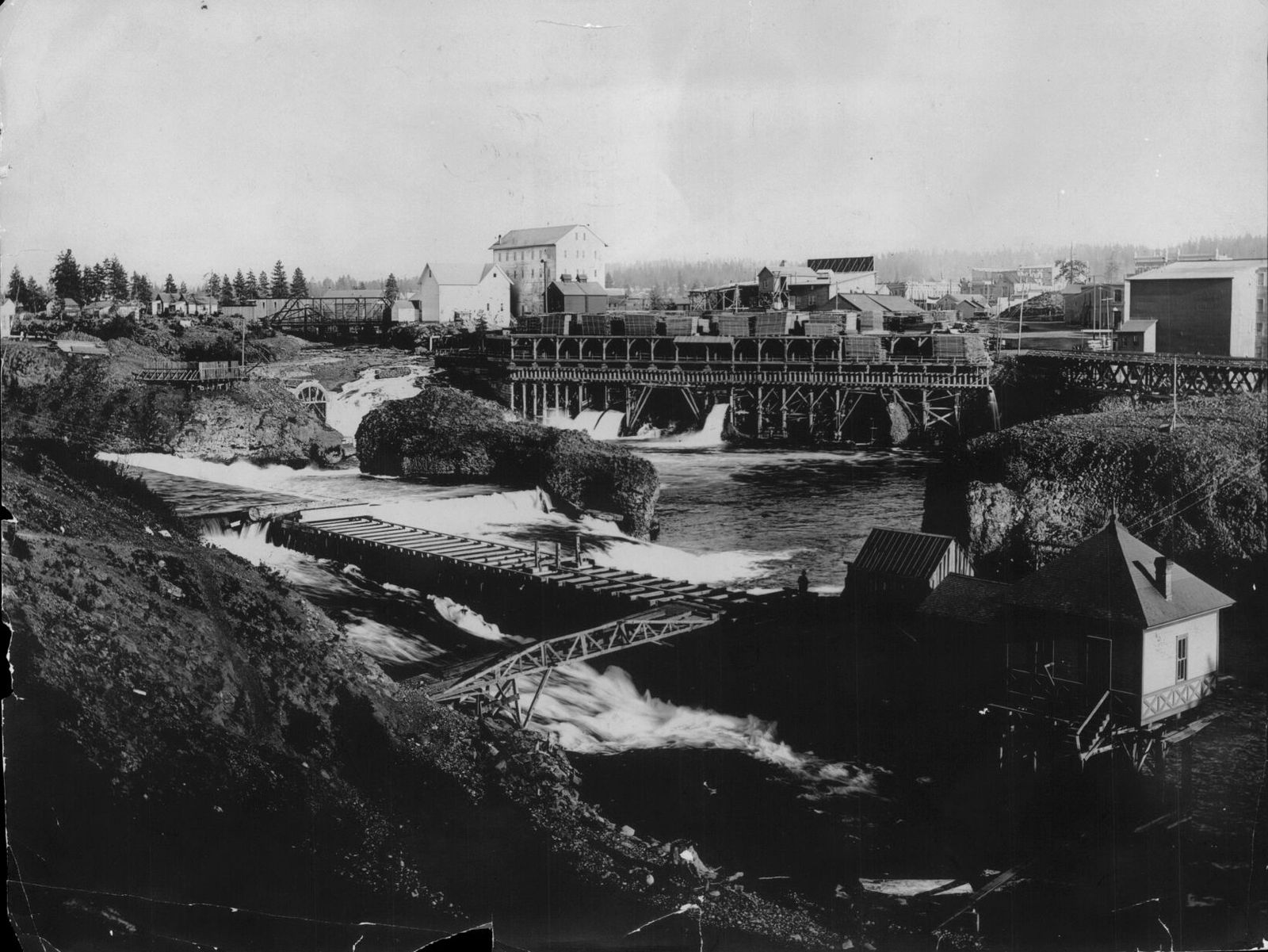 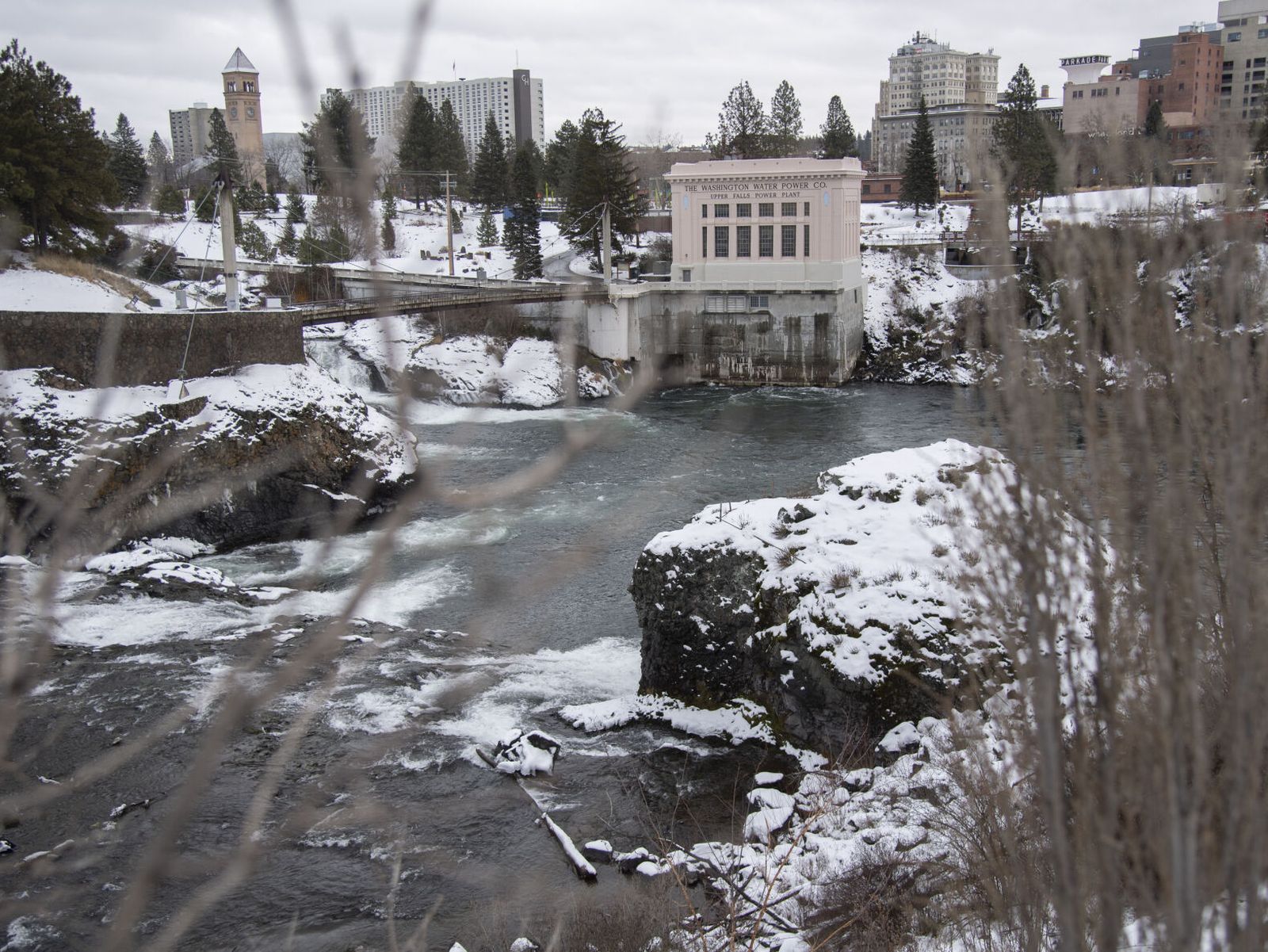 Then and Now: Spokane Mill Company

A water-powered lumber mill was built on the city’s riverfront by white settlers in 1871. The mill helped build the first generations of buildings here but had many stops and starts.

Pioneer settlers S.R. Scranton and J.J. Downing picked the area of today’s Riverfront Park for the mill based on two advantages: The river’s south channel offered swift flow to turn a water wheel, and the land around was relatively flat for moving logs in and lumber out. The first mill had a “muley” saw, a vertical blade that moved up and down on a crank attached to the water wheel.

City founder James Glover took over the mill when Scranton and Downing sold out, and he upgraded to a five-foot circular saw.

The mill was upgraded again in 1880 by businessman Anthony M. Cannon, who took over with another partnership that lasted five years. A dam was built above the river channel to form a holding pond where logs could be stored.

Brickell, an experienced mill operator who moved from California, became an important figure in banking and manufacturing.

Though the flames of the great fire of 1889 had spared the mill, another massive blaze in May 1892 destroyed the sawmill along with the nearby Echo Roller Mills and Spokane Oatmeal Mill, a financial loss totaling more than $300,000.

Businessman Simon Oppenheimer led the rebuilding and opened Northwest Milling and Power Co. in 1895. Oppenheimer was also building the Spokane Flour Mill and went bankrupt in both ventures in a few years.

The Dutch bank that had financed Oppenheimer reopened the plant as the Sawmill Phoenix in 1898. It would operate under that name until Long Lake Lumber Co. took it over in 1924.

The mill power was converted to electric motors, and the water that once powered the saws was repurposed by WWP engineers to drive the Upper Falls Power Plant, which opened in 1922.

The lease on the mill site was terminated by WWP in 1945, and the plant was dismantled.

1888: The Spokane Mill Co. is seen as a web of timber framing on the south bank of the Spokane River, supporting the sawmill’s machinery over the swift water that drove the saw blades. Since it was built in 1871 by the first white settlers, it was expanded and remodeled several times. The complex burned in a massive fire in May 1892 and later rebuilt on a smaller scale, reopening as Northwest Milling, then Sawmill Phoenix and Long Lake Lumber. It closed around 1945 when its lease ended. By then, it was surrounded by railroad tracks and a bustling downtown area.

Present day: The Upper Falls Power Plant, operated by Avista, is still powered by the water channel that once powered a pioneer’s sawmill that was there from 1871 until 1945. The utility company has owned the site since it bought the assets of mill owner Simon Oppenheimer, who went broke in the late 1890s.