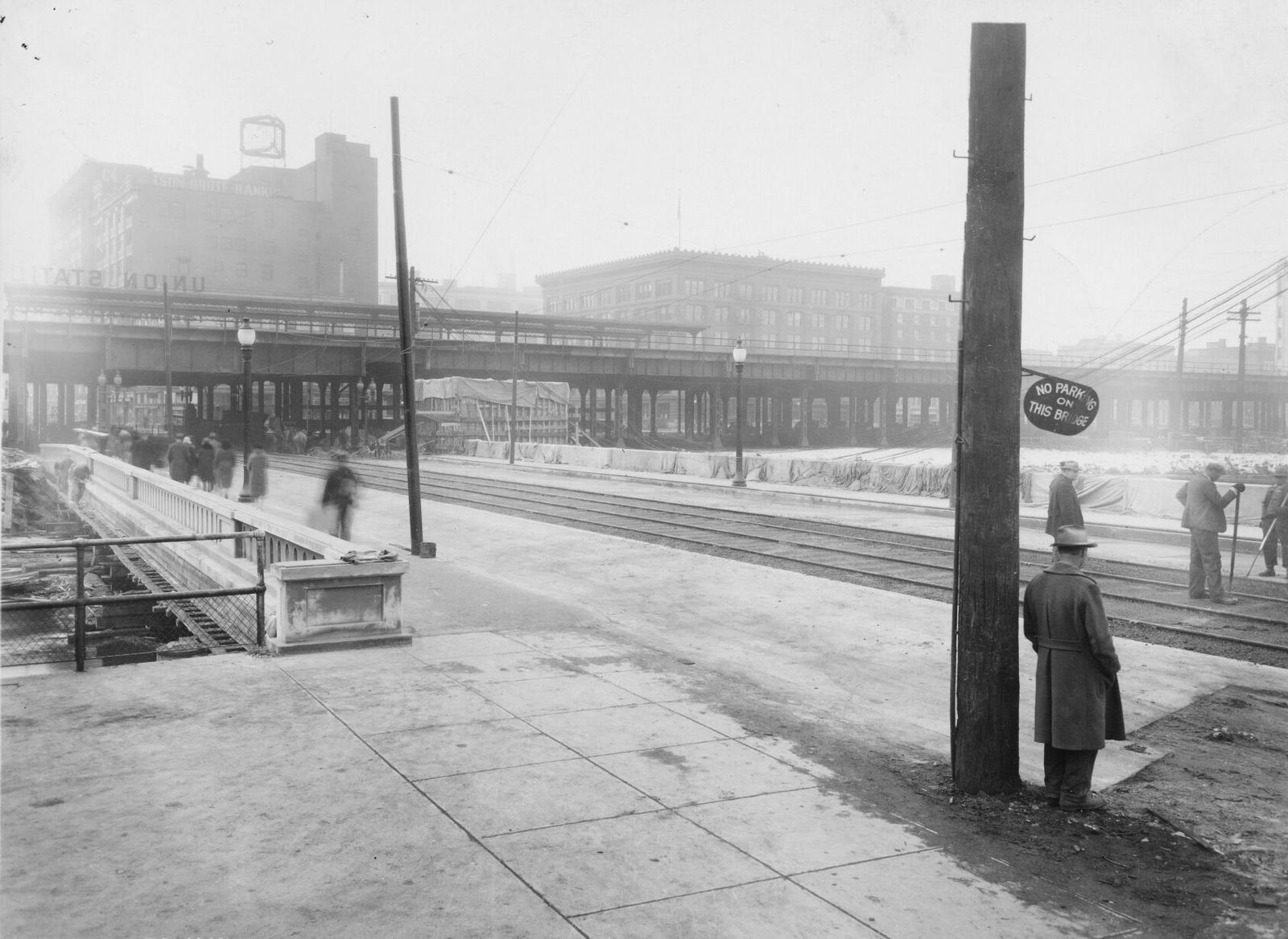 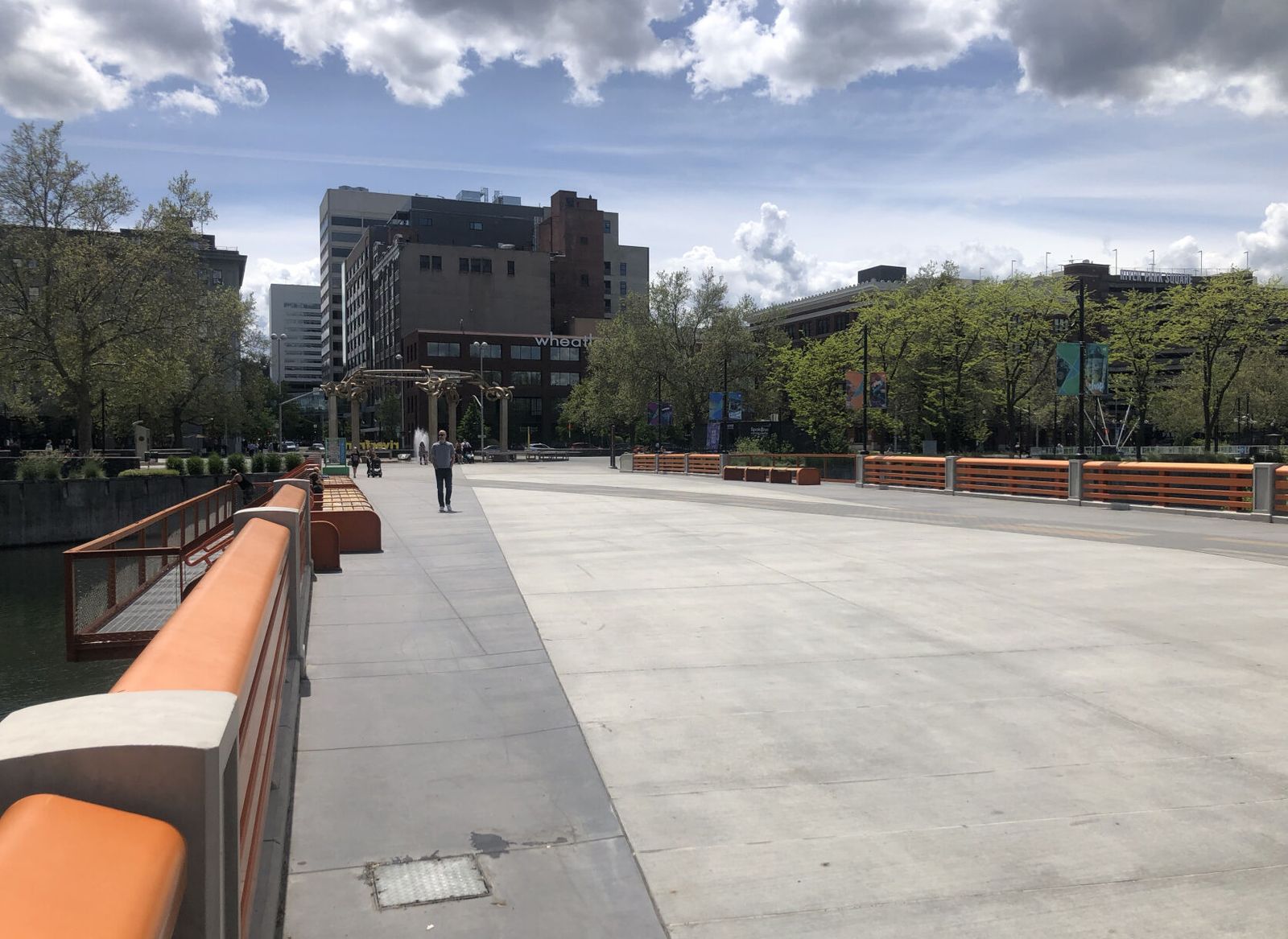 Then and Now: Howard Street Bridges

The Howard Street Bridge over the south channel of the Spokane River in downtown Spokane was the first downtown river bridge, built around 1881, a full decade before the first wooden Monroe Street bridge. Before that, locals had to use a ferry that operated just east of Division Street or use their own boat or canoe.

From 1881 to around 1929, the wooden bridge was renovated four times to add strength and width to the 185-foot wooden span. This bridge only allowed access to Havermale Island, where commercial buildings and houses were being built.

A sequence of three bridges were required to move cars from the south bank to the north bank, via Havermale Island and Crystal Island, which today is called by a Salish name, snxwméneɁ, meaning “salmon people.” It is pronounced “sin-HOO-men-huh.”

The gap from Havermale Island to the smaller snxwméneɁ island was called the river’s middle channel. In 1892, it was first spanned by a steel bridge with sidewalks cantilevered on the outside of the bridge deck. Part of the impetus for building was the arrival of railroad tracks and the building of depots around Havermale Island.

Though the wood decking on the middle channel bridge was kept covered with a thin layer of asphalt, thousands of cars and buses used the bridge for decades, causing potholes and decay. Around 1965, the wooden beams and decking were replaced with pre-stressed concrete beams and more asphalt. Because of the decay, the middle channel bridge was limited to pedestrian traffic only during Expo ’74.

Also in 1892, a steel bridge was built across the river’s north channel, from snxwméneɁ island to the north bank completing the route. The north channel steel bridge was replaced in 1907 with a concrete bridge. It was part of a trend in the early 1900s to replace steel bridges with concrete, which could resist damage from heavy river flows.

The south and middle Howard Street bridges were showing their age but weren’t part of the $64 million Riverfront Park bond passed in November 2014. To pay for the new $6.6 million south channel bridge replacement, park planners found a way for the city’s utility department to slowly pay off the bridge, which is now lined with orange benches that look out over the river. It reopened in 2018. Replacement of the middle channel bridge is postponed until money is available.

Captions: 1931- The recently-completed Howard Street Bridge over the Spokane River's south channel in downtown Spokane is the first concrete bridge in this spot, replacing a wooden structure. This structure would last for  until it was replaced with a new version which opened in 2018. Washington State Archives - Digital Archives

2022 - The new Howard Street Bridge, built by LaRiviere Corporation, opened in 2018 in Riverfront Park, incorporates benches where park-goers can look out on the calm water in the south channel of the Spokane River. Jesse Tinsley/THE SPOKESMAN-REVIEW