Obama on Mount Rushmore?  A mere six months ago, despite barely making a dent in his presidency, if you would have asked some of his more fanatic followers if they thought that was appropriate, you would have been greeted with an enthusiastic, "Yes we do" 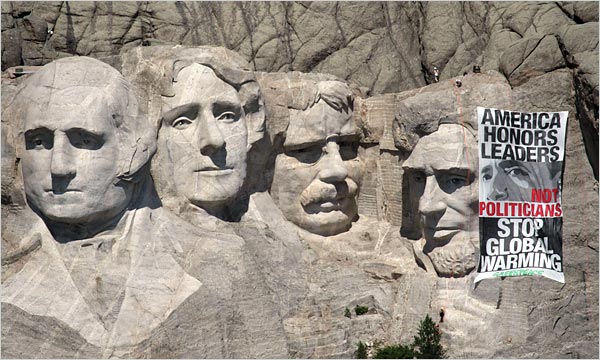 Well he made it there, but the message associated with the gesture wasn't one of admiration, but of frustration.  Last Wednesday morning, a group of Greenpeace activists targeted the iconic Mount Rushmore to protest President Obama's unwillingness to criticize the House for watering down last month's ambitious climate legislation, and for going along with it, leaving many feeling that he is abandoning his campaign promise that he would be a leader on combating global warming and shifting to renewable energy sources.  The banner, which read, "America honors leaders not politicians: Stop Global Warming," was draped down the front of Mount Rushmore next to President Abraham Lincoln's head by three repelling Greenpeace activists while the action was caught from several angles by a handful of others.  The protest was in conjunction with the G8 summit which was happening at that time in Italy.  Where leaders of the most industrialized nations were meeting to discuss, among other topics, climate change - where the hope was that President Obama would show the rest of the world that the United States was ready to lead on combating climate change, especially as the uber-important Copenhagen Climate Conference nears.