I really don't have anything to rant about today. Sorry. Though I did notice the stars of the Arena Bowl seemed to be all former Shock players. And Tiger Woods is in position to win another major. And the Mariners threw away what should have been a sure win last night. And ... ah, you get the picture. Read on. 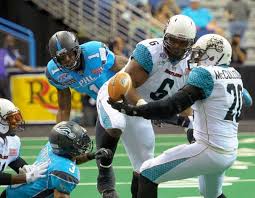 • But really, why rant? It's not going to make any difference. The Shock were once the premier AF2 franchise, won the first title in the revamped AFL and now are also-rans. Meanwhile their former quarterback Nick Davila and players like Markee White and Kevin McCullough all made big plays in the Arizona Rattlers' 72-54 ArenaBowl victory Friday night, allowing Phoenix fans to celebrate instead of those in Spokane. And Tiger Woods is going to win another major sooner or later, so why not this week in South Carolina? Of course, he could play like he has every weekend of every major this year and finish tied for 22nd. And what the heck, the M's aren't going anywhere this year, are they? So why get mad when they hand Felix a 5-0 lead against the Angels, then he lets it all slip away. Well, everything but the winning run, which came in the bottom of the ninth on a wild pitch by Josh Kinney. So why get upset. It's not important. There are more important things to take care of today (see the bottom of this post).

• Washington State: The Cougars will scrimmage today and, if you have any doubt, I'm sure Jeff Tuel will take most of the snaps with the first team. They practiced yesterday and Christian Caple was there, filing a blog post last night, another this morning and this story for the Saturday S-R. ... Ted Miller makes my weekend with his Friday mailbag on ESPN.com. ... The Pac-12 Network is inching closer to the starting line, with more and more partners signing on the dotted line. The network has a chance to be pretty cool, especially with the dedicated young pups it hired.

• Eastern Washington: The Eagles' tight ends will be heard from this year as Jim Allen's story following yesterday's practice shows. Jim also has this blog post.

• Idaho: A lot of the Vandal football games this season will be available on your television. Well, maybe not yours, but folks around here.

• Mariners: First Dustin Ackley hits a two-run home run. Then John Jaso adds a three-run dong. Bingo, it's 5-0 Mariners, Felix is pitching and it's time to focus on the Olympics. Wrong. Mike Trout doesn't respect his elders, drives in five runs and the Angels of Los Angeles or Anaheim or La Habra win 6-5 with a ninth-inning run. Even with Brendan Ryan back in the lineup. Jeez.

• Seahawks: Though the Hawks lost an offensive lineman for a few weeks to an elbow injury, that can't temper the anticipation of tonight's first exhibition game. Especially for Matt Flynn, who will start at quarterback.

• Sounders: The Sounders need to catch San Jose in the MLS' Western Conference, if not in the regular season at least by the end of the playoffs. That process starts tonight as Sigi Schmid's team heads to the Bay Area.

• Thirty-three years ago today there was this scared, skinny kid standing in a little room off the main hall of St. John Lutheran Church in Covina, Calif. It was a Saturday, just like today. And it was so hot the kid's shoes were sweating. His best man wasn't helping; constantly reminding him how hot it was before breaking out in some sort of maniacal laugh. It serves him right to end up a USC fan. Yep, 33 years ago I had the best day of my life, a day that's still paying dividends. If you know me at all, you know it's almost impossible to spend 33 minutes with me, let alone 33 years. But somehow Kim's done it. Thanks. I can't believe how lucky I am (and yes, you better believe I'll make her read this). Until later ...