I was talking to someone the other day about this column and they asked me a question. They wanted to know how I came up with my ideas each day. I told them there is no magic formula, I just read the news and something comes to me. At least that's how it works most days. Read on.

• The one thing I want to write about this week is the last decade of Washington State football. But it's not an item for a Tuesday morning, when the bowl game is still a few days away. It's more of a Friday morning piece. We'll do it, just not today. So what do we write about this morning? I'm not sure.

• We could laugh with you folks concerning a tweet from former Washington State commit Darren Gardenhire, who sent one out yesterday saying he was "proud to announce my last and final commitment" was to Washington. Really? Last and final? Are we sure? Such comments are why this whole commitment culture is such a farce. When a high school kid announces he will attend a certain university, that's all it is. An announcement that, on that day, he or she plans on attending that school. Tomorrow is another day. So, from now on, we are going to label it as such. An announcement. The word commitment will no longer pass my fingertips in this context, other than to make fun of it for your amusement. 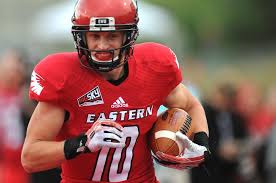 • We could cry with you over the injustice of Vernon Adams not winning the Walter Payton Award as the best player in FCS football. The Eastern quarterback, who finished second in the balloting, not only has a record-setting year but his team is still alive in the playoffs. He's a big reason for that. But the Eagles can't win every award. Cooper Kupp (pictured), Adams' favorite target, already had roped in the Jerry Rice Award as the best freshman in FCS football, so that was Eastern's award for this year.

• And we could just shake our head at the week ahead. The Cougars in a bowl game, the Eagles in the semifinals – at home – and the Hawks with another chance to reach their main goal, regular-season variety, home field for the postseason. Not to forget there is college basketball, high school sports and a handful of other things in the near future as well. And Christmas is just around the corner. That's sort of important.

• WSU: Jacob Thorpe is keeping up with the goings-on around the football team and uses today to look toward the fireworks that should be on tap Saturday morning. He also has a look back at the 1992 Copper Bowl (pictured) and links in a post this morning. ... Before we move on, Jacob also has this blog post on WSU losing its soccer coach to USC after just two successful seasons. Bill Moos' stated desire to ensure Pullman is no longer a stepping-stone for coaches is still an elusive goal. ... Bud Withers caught up with some members of WSU's last bowl team, including Lewis and Clark High graduate Erik Coleman, and examined the gap between bowls. ... Colorado State has a freshman who has invigorated its passing game. ... The Heisman has been handed out and here's one man's reasoning behind his vote.

• EWU: Jim Allen has the story of Kupp's honor – it was by the widest margin in the history of the Rice award – along with more in a blog post. ... Jim also has a look at Eastern's Saturday opponent, Towson State, which upset Eastern Illinois last Friday, and links this morning. ... Weber State has plucked a trio of Southern Utah football coaches.

• Whitworth: The Pirates found their man. To be football coach, that is. Rod Sandberg, who was at Wheaton College, is the next football coach. Thomas Clouse has the story. ... The basketball team eased past Southwestern, 74-59, at the Fieldhouse.

• Shock: Erik Meyer will return as the Shock's quarterback. The team made official what was an open secret around town yesterday.

• Preps: There were enough high school basketball games last night that we have a roundup.

• Seahawks: Sure, everyone is happy about the shutout win over the Giants, including coach Pete Carroll, but this is the NFL. Like Italian driving, what's behind you doesn't matter. It's time to look ahead – and ask the same questions as last week. Will Percy Harvin play? How about Brandon Browner? Wait and see, Carroll says. Why? Because he doesn't know himself. ... Speaking of the shutout, there were some folks who played a lot more snaps than they had been playing. ... Sometimes a rude shock can change a career.

• Sounders: The roster remodeling continued yesterday, though it slowed down a bit. And the changes don't seem to be spreading to the coaching staff. ... It looks as if Clint Dempsey is going to be playing in England again soon. This time on loan.

• That's it for today. Guess what? We are back on the radio today and for the rest of the week. If you want to listen, click here. We're on the Patchin, Lukens and Osso show between 3 and 6 p.m. Until then ...