A GRIP ON SPORTS • Technology has made our life better. There is no argument. But there is some disagreement if all technology is better. Take instant replay for example. It’s good. And bad. Read on.

• We bought a clock a few years back. It’s somehow connected to the world wide ethernet or interweb or something like that. It’s supposed to keep the correct time on its own. It seemed cool at the time.

And yet it’s never right. For one thing, it was programmed before daylight savings time was changed, so it’s never figured the new configuration out. And it runs fast. I don’t know why, but it’s about three or four minutes faster than every other clock in the house. Maybe it knows something the rest of the clocks don’t?

Today I kept glancing at it before I got out of bed. It seemed like the right time to get up but, nope, I had another hour. Except I didn’t.

For some reason the clock decided to jump back last night. In the middle of the night. By itself. Maybe a Russian hacker got into it? Or this “Dream Machine” decided to defect to Samsung and was letting me know it was going to blow up in an hour or so.

I guess I’ll never know. I’ll try to fool it today, switching time zones on it and getting it within three or four minutes of being right – the best I can do – and move on.

Which, after the last couple days, I’m sure Adrian Gonzalez wishes baseball would do with instant replay.

I was never sure replay would work for close plays in baseball when they put it in. Now I’m sure it doesn’t. Not yet. There are too many variables with the game. When is the ball in a fielder’s possession? Exactly? When does the front spike make contact with the base? Exactly? When does a fingertip touch home plate? Exactly?

With today's technology, there is no way to know. Exactly. So too many of the replayed calls in baseball offer little in the way of definitive evidence. And yet plays are changed. See, replay is a tool to double check judgment. But who double checks the checkers?

There was a play in each of the last two National League Championship Series games that needed replay. Both were bang/bang plays. Both involved Gonzalez. Neither determined the outcome of the game. But both ultimately were decided by replay.

The first was a play at the plate Wednesday night. Gonzalez tried to score and was thrown out. He made a great slide. But the umpire on the play decided the tag, on his face, occurred before he got the hand in. It went to New York, where baseball keeps its replay people. 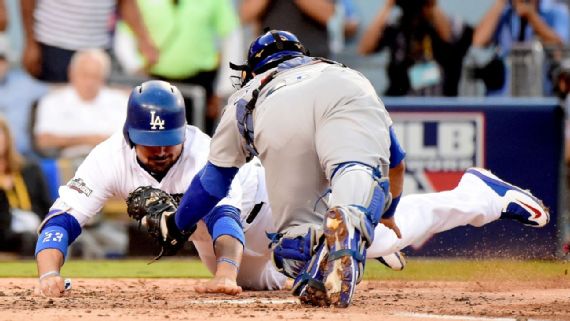 Watching the video in almost frame-by-frame mode made it clear it wasn’t all that clear. But stopping it at one spot was definitive. Maybe. Gonzalez’s hand was on the plate and the glove was still an inch or two from his nose. Safe. Except the call stood. Out. OK.

Last night Gonzalez tried to beat out an inning-opening bunt in the seventh. A great play, a quick throw and he was called safe. Close. The call goes to replay. Looking at all the angles, it was – and usually is – almost impossible to tell when the ball was completely in the first baseman’s glove. Then it had to be determined, to the same degree, when Gonzalez’s front spike made contact with the base. It wasn’t all that clear. Yet the call was overturned. Definitive evidence? It comes down to someone’s definition of definitive, doesn’t it?

I listened to Richard Justice of MLB.com speak on a podcast the other day. He said a major league baseball official told him the Cubs were always going to be on in prime time during the playoffs. They were termed "ratings gold." The best thing that’s happened to baseball in years.

High ratings mean more profits. So it makes it easy to connect dots when they don’t actually, you know, connect. Unless they do.

• WSU: Before we get to football, let’s take a moment to acknowledge today is the Pac-12 basketball media day. Defending champion Oregon was the runaway selection as the preseason favorite of the media, the first time that’s happened. The Ducks were also Jacob Thorpe’s choice to win the conference, though Jacob didn’t have the Cougars’ 12th. That’s where they finished in the overall poll. ... Though Jacob is in San Francisco for the day, he does have a couple stories, one on WSU’s top-ranked rushing defense and the challenge it faces Saturday and the other based on a Pac-12 news release from after 10 last night. The conference fined Mike Leach $10,000 for his – sarcastic and smart-alecky – comments on Arizona State, sign stealing and the Sun Devils' "command bunker." ... Also, the Cougar soccer team is struggling in Pac-12 play. ... Arizona State is working on its tackling angles this week. ... Before we move on, wanted to note Cody O'Connell has now made two major midseason All-American teams, FoxSports and CBSSports.

Elsewhere in the Pac-12, there is plenty to watch down the stretch of the football season. And if you have Dish, you're helping your school earn a few more bucks. ... Oregon is still trying to get its act together before it has to face California’s potent offense tonight on ESPN. ... Colorado, leading the South, faces the tough test of winning at Stanford, the team it emulates. ... Utah, also a South leader, travels to UCLA. ... Washington is expected to beat the daylights out of Oregon State. ... USC and Arizona have byes this week.

• Gonzaga: As we passed along yesterday morning, the Zags were ranked 13th in the preseason coaches’ poll.

• EWU: It’s not often a college football team have two players as close as the two Jim Allen writes about today. Well, the Webster twins are twins, after all. ... Jim also held a live chat yesterday and has the transcript. ... Around the Big Sky, North Dakota has to draw players from far and wide. ... Northern Arizona knows it will have its hands full with Montana. ... Montana State isn't winning. But it has some players who are still leading. ... Sacramento State is going through hard times.

• Whitworth: You made need some extra time this morning. Just make sure you don't miss this Tom Clause feature on the Pirates' Jordan Pride.

• Preps: Greg Lee had a busy day – and night. First he covered the state soccer match in North Idaho won by Lake City 4-0. Then he traveled to Albi and covered the football doubleheader. In the first game, North Central handled Rogers 21-8. And in the nightcap showdown, Mt. Spokane scored the game’s only points with 30 seconds left to defeat Shadle Park, 7-0. There is also Colin Mulvany's photo gallery from that game.

• Seahawks: One of the best things a coach can do is to be constantly evaluating his methods. And whether the way he or she is doing things is working with the group being coached. Defensive coordinator Kris Richard seems to be doing just that right now. ... So we’ve always spelled it “Steven,” not “Stephen.” Turns out the latter is correct. But Steven Hauschka wants us to keep using the “v.” ... Russell Wilson is relentlessly positive. And we’re positive he and Earl Thomas have made each other better. ... There are injuries. And questions. There always are.

• Mariners: The entire coaching staff is returning next season. And another coach will be added.

• Sounders: The Sounders have to win this Sunday to be assured a playoff spot.

• If you like classic movies, you might understand this: I am playing Alfred Hitchcock today. Yep, I’m making a cameo appearance. For a couple hours today I will join Keith Osso and Rick Lukens on the 700 ESPN set. You can listen here if you like. We start at 3 p.m. Until then ...