SHELTON, Wash. – Just as ranching has rodeo and farming has tractor pulls to show off certain work skills, shellfish farming has oyster shucking contests, ranging from local to national to international.

The timed opening of oysters features audience participation unlike any other competition.

The West Coast Oyster Shucking Championships take place every fall during Oysterfest, a two-day state seafood festival just outside Shelton where community groups raise money for the coming year’s activities at booths that sell everything from scallops wrapped in bacon to smoked salmon and fry bread. And, of course, oysters cooked about every imaginable way, from barbecued to fried to Rockefeller-ed.

On the first day, shuckers vie to be the fastest to open two dozen oysters and plop the meat on a plate as quickly as possible, as on the processing line. On the second day, they again open two dozen oysters but are judged on speed and presentation for arranging them neatly in the half shell, as though presenting them to customers at a restaurant.

The skills are not completely interchangeable. Production line shuckers usually open an oyster by inserting a knife at the “bill” where the shell separates to open in the water. Restaurant shuckers usually open it from the other end, where the shell is hinged together. The former is faster; the latter is neater and retains more of the oyster’s liquid.

The knives are sharp. “We have had injuries in the past,” announcer Mike Barnard said. “It makes the competition more exciting.”

Shuckers who come from all over the West Coast compete in heats, with a judge standing behind each one. The nine fastest times from the qualifying heats compete for the championship. 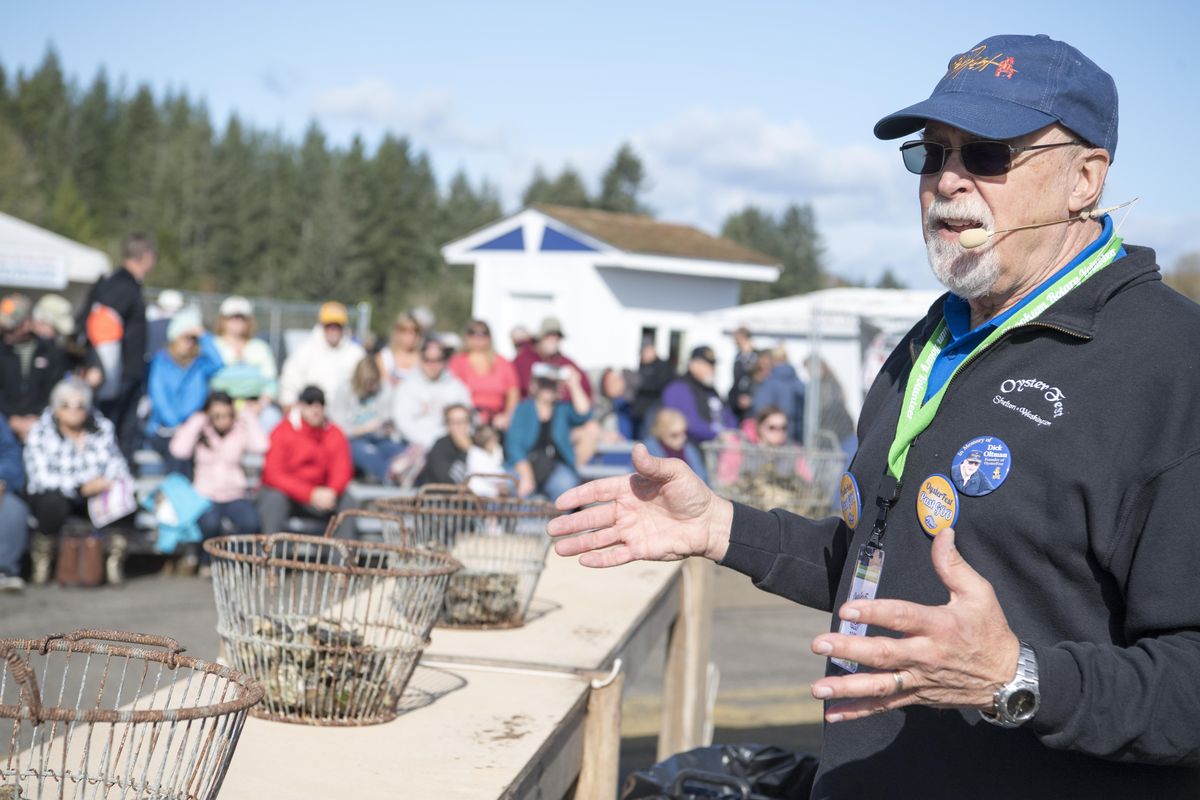 As with any true sporting event, fans take sides and the contestants trash-talk, particularly the shuckers from Taylor and Jolly Roger Seafoods, one of the state’s other major growers and processors, with disparaging remarks about who grows the better bivalves. Contestants pick 25 oysters from baskets and arrange them on the table in front of them. At the signal, the stabbing, prying and scraping start.

In two days, the shuckers will go through some 550 dozen oysters. Taylor, which sponsors the competition, supplies the oysters and matches prize money if its shuckers win.

In the speed competition, some contestants struggle to get two dozen oysters open in five minutes. Others are done in under two. Juan Loza, a Taylor employee from Shelton, breezed through the second heat in about 1 minute, 45 seconds, and actually opened 26 oysters. The meat of two of his original oysters plopped out of the shell and onto the ground. They couldn’t be counted, so he grabbed and opened two more.

Loza said he came to the state from Jalisco, Mexico, in 1988 at age 16, and after spending time picking apples and cherries in Eastern Washington he came west. He’s worked at Taylor for 20 years, seven of them as a shucker. His rule for picking a competition oyster: Get a flat one.

Each heat is followed by a waste-not, want-not tradition. Audience members crowd around the shucking tables to eat the oysters that have been flicked onto the plates by the shuckers.

In the final heat, Loza finished sixth in the speed-shucking competition, 16 seconds behind the reigning champion, Miriel Silva of Jolly Roger, who won the speed competition with 1:20:00. Silva would win the half-shell competition the next day as well, on a combination of speed and presentation.

“We were sending Cambodian, Vietnamese and Hispanic shuckers,” Barnard said. “They didn’t like us competing against their white guys.”

Want to learn the right way open an oyster? Go to , to see Xinh Dwelley, former five-time Oysterfest shucking champion and gourmet chef, and Bill Dewey, a longtime shellfish farmer and international expert on the effects of ocean acidification, demonstrate the techniques.

Lead photo credit: Mike Barnard, a retired surgeon and volunteer at Oysterfest, slurps a raw oyster leftover after the West Coast Oyster Shucking Championships on Saturday, Oct. 7, 2017 in Shelton, Wash. The audience can step up and grab a oyster meat after the contest is over. (Jesse Tinsley / The Spokesman-Review)