The tip of the blind Spokane resident’s cane had just popped off after some rough traveling on the cracked, uneven and missing sidewalks of her Southgate neighborhood, and she was working to snap on a new cane tip she handily had in her pocket.

“I never leave home without another,” she explained.

Canfield was out for a walk, but it was less like a relaxing stroll and more like navigating an obstacle course.

There were uneven slabs of sidewalk. There were unpredictably aligned curb ramps. There was a disorienting roundabout right outside her front door. There was a totally unpaved block. There was a nearby stretch where the sidewalk was missing altogether and that she went out of her way to avoid.

“That’s a hell of a crack,” Canfield said, feeling for one of many inconsistencies in the pavement with her well-worn cane. 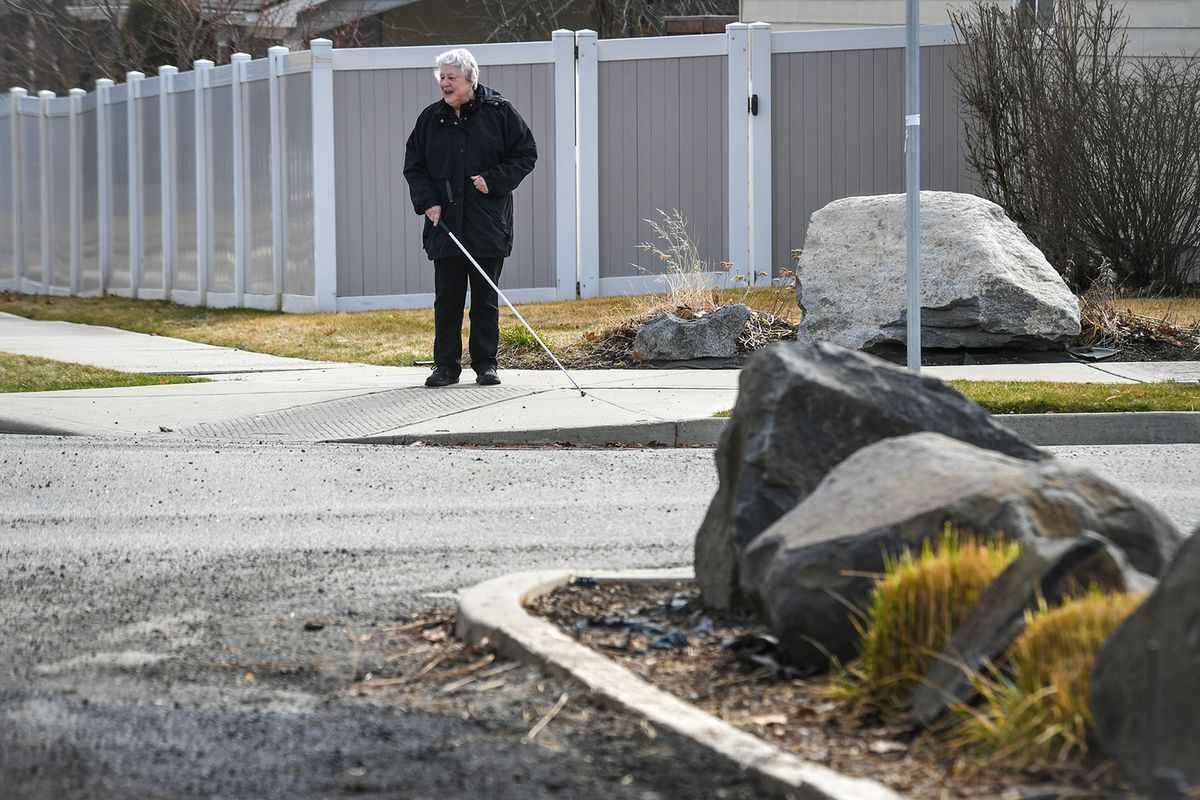 Alco Canfield, 73, who is blind, pauses her outing at the corner of 42nd Avenue and Cook Street where the sidewalk ends, Friday, March 26, 2021, in Spokane. (Dan Pelle/THESPOKESMAN-REVIEW)

Canfield doesn’t let the difficulty of getting around deter her from going out, she said, but she certainly wishes it were easier.

“What’s the choice?” Canfield said. “You can sit home and rot, or you can go. … The world is made for people who drive, and that’s just how it is.”

Disability Rights Washington, a nonprofit, recently launched what it calls the Disability Mobility Initiative to make the world – or the state, at least – somewhat less car-centric.

The initiative aims to raise awareness about the challenges people without cars face and to push the state Legislature to invest more in the sidewalks, crosswalks and public transit that this population requires to get around.

Anna Zivarts, director of the initiative, said current funding for active transportation grants accounts for only about 2% of the approximately $11 billion state transportation budget currently being hashed out in Olympia.

And she believes that reflects skewed priorities, with too much emphasis on funding expensive highways and too little spent on far less expensive projects that could help the quarter of the state’s population, including children, without driver’s licenses.

“This is not what an accessible, equitable transportation future looks like,” Zivarts recently told state senators while testifying about their proposed budget.

That future, she argues, is one that has better paratransit, better fixed-route public transit and better sidewalks.

Callary works as a certified orientation and mobility specialist with Spokane’s Lilac Services for the Blind, where Canfield is one of her clients. Her job, she said, is to “teach people of all vision-loss levels techniques and strategies to travel independently,” and she says functional sidewalks are vital to allowing them to do so.

“The buzz phrase,” she said, “is ‘social determinants of health.’ ”

And access to transportation is one of those determinants, as it is key to accessing everything from health care to healthy food to social interactions to job opportunities.

“It really is so essential to a person’s well-being to have the ability to travel,” Callary said. “And sometimes a sidewalk is all that’s needed.”

But not all sidewalks are created equal.

According to Callary, what may seem like subtleties of sidewalk design to sighted people can make a major difference in the daily lives of people with vision loss.

A curb ramp with an unpredictable alignment, for example, can lead to a loss of direction. A snow-covered sidewalk can make an otherwise reliable route “impassable.” A ditched Lime scooter can be a dangerous hazard. A driveway slope can pull someone with vision loss off their line of direction and into the street. A missing patch of pavement can send a person who would otherwise be able to ride a city bus to fill out an application for paratransit.

“For a person to be dependent on others simply because of a missing piece of sidewalk in their neighborhood is ridiculous,” Callary said.

But she also said there’s hope for improvement.

“It does seem like people are receptive and like positive changes are on the horizon,” Callary said.

She said the city recently altered its street design standards to mandate that curb ramps be aligned with the direction of travel and have consistent grades.

“People do seem to be catching on to the benefit of perpendicular and parallel (alignment) rather than unpredictable angles,” she said. “Those types of cues are very helpful.”

Callary also said the city is in the process of addressing issues with Lime scooter use “with strategies that look like they might be effective.”

She’s also “really happy” about the city’s efforts to add accessible pedestrian signals, which use nonvisual cues to help people cross streets, though she said “they’re often not placed where a person could actually use them, so it doesn’t serve a purpose.”

Callary’s client Canfield pointed out many of the same issues on her Friday morning walk, but she wasn’t waiting for a fix.

“I have to memorize the streets,” she said.

But it’s not just the streets. It’s also the cracks, the odd angles, the driveways, the utility boxes, the dirt roads, the crosswalks and, most dangerous of all, the cars.

Construction of the Spokane Transit Authority’s City Line will lead to the following closures this week:

City crews will begin Tuesday a project on Hartson Avenue between Freya and Myrtle Street. There will be delays and lane closures.

Crews will start grinding on Clarke Avenue from Spruce to Elm Street as part of the $4 million South Gorge Trail project.

The east curb lane of Lincoln Street between Second and First Avenue will be closed Wednesday through Friday.

Riverside Avenue between Adams and Madison Street will be closed intermittently through April 5 for Quanta work.

Northbound Five Mile Drive between Horizon Ridge Place and Abigail Avenue/Audubon Street will be shifted into the median through April 5 for utility work.

The west curb lane and shoulder of Highway 2 between Hawthorne Road and Holland Avenue will be closed until April 30.

Work is expected to continue this week on the Harvard Road interchange improvement project, leading to closures on Interstate 90: