Transit planners have big dreams for extending and improving the Ben Burr Trail, which connects lower Lincoln Heights to downtown Spokane, passing through a perpetually changing – if not always idyllic – urban landscape along the way.

But they are starting small.

Crews are in the process of installing a pair of HAWK beacons where the trail crosses Second and Third avenues on either side of Interstate 90 near Liberty Park in East Central.

HAWK – a tortured acronym that stands for High-Intensity Activated crossWalK – beacons allow pedestrians and bicyclists to stop traffic with the press of a button that activates a stoplight.

The same technology is in use elsewhere around the city, including on Grand Avenue near the main entrance to Manito Park, and officials hope they will help improve safety at some of the more dangerous uncontrolled crossings along the Ben Burr trail’s current 2½ -mile course.

As of now, that course stretches from 11th Avenue and Fiske Street to where the Centennial Trail crosses the Spokane River to the Gonzaga campus via the Don Kardong Bridge.

But the Ben Burr’s path is on the brink of becoming longer and more complex. 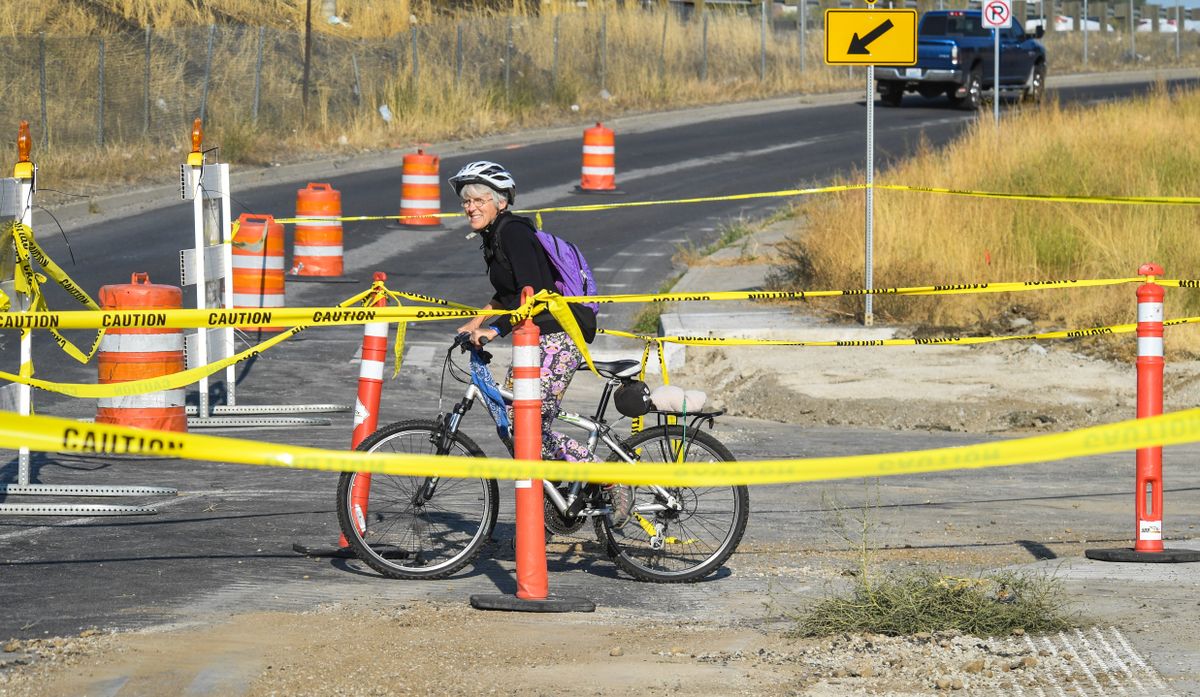 Cyclist Susan Hale waits for an opening in traffic to cross north on Perry Street at 3rd Avenue as work is underway for pedestrian safety construction of hybrid beacons along the Ben Burr Trail, Wednesday, Sept. 30, 2020 in Spokane. The project is budgeted for $363,000. (DAN PELLE)

City officials are working behind the scenes to link the trail from just north of Martin Luther King Jr. Way to the Iron Bridge, creating both a new connection from the South Hill to Gonzaga and a new loop around the river.

To do so, the city needs to fill two gaps in the trail. One gap exists along the river near the former Brown Building Materials site. The second gap stretches beneath what will be the new East Trent Bridge.

Filling that first gap will be the shared duty of the city and the developer of the Brown Building Materials site, according to Dan Buller, a city of Spokane senior engineer.

As for the second gap, the city is in the permitting process to fill it, though doing so will require the new East Trent Bridge to be finished, which isn’t expected to happen until 2023.

That means the new section from beneath the Hamilton Street overpass on the south side of the Spokane River to the Iron Bridge and back over the river to the Centennial Trail likely won’t be complete for three or four years, Buller said.

While that may seem like a long timeline, it likely won’t be the end to improvements on the trail.

City and county planners are in the preliminary stages of pursuing a more ambitious and long-term project that would extend the trail all the way to Moran Prairie.

While that extension is mostly just a “long-term dream” at this point, according to Inga Note, a senior traffic planning engineer for the city, it’s one she and her counterparts in Spokane County hope to realize.

And some of the work is already in place, in the form of a separate section of trail that starts on its south end at the Southside Family Aquatic Facility on 61st Avenue and runs north to the dead end of Myrtle Street.

One possibility, Note said, is to piece together a trail from that point to the trail’s current terminus at 11th Avenue and Fiske Street. But that won’t be easy.

While much of the existing Ben Burr trail sits in the long-abandoned Spokane-Palouse interurban rail line, much of that right of way has since become homes, yards and other forms of private property.

It’s not impossible that such a connection could be cobbled together, Buller said, but it’s also “not at all obvious” how it would happen.

As city officials are left with figuring out that puzzle, Spokane County has come up with its own idea for how to create a new trail that would bring bicyclists and pedestrians within at least striking distance of the current Ben Burr Trail.

Barry Greene, a transportation and development services engineer for the county, calls that idea, which currently exists as a line on a long-term planning map, the Glenrose Trail.

Its namesake is the road it would follow from the end of 57th Avenue, around the southeastern corner of the city and back into Spokane at Havana Street and 17th Avenue.

That leaves another complicated gap for the city and county to deal with, trying to get the trail from there to 11th and Fiske, but Greene and Note say interest exists for somehow making the connection.

“We get a lot of requests for better routes off the South Hill,” Note said. “The nature of it having more vertical topography than other parts of the city, it’s just tougher to cycle out there. And I think having a well-defined trail system makes it easier to use. And railroad grades are perfect because they always have a gentle slope.”

Though much time and work remains before the trail is extended, there’s good news: the stretch that already exists is well worth a walk or a ride, as it splits off the busier Centennial Trail, weaves through the industrial western edge of East Central, climbs above Liberty Park, crosses Altamont Street on a high pedestrian bridge and passes along the wooded edge of Underhill Park.

The Spokane Transit Authority isn’t cutting service or projects, despite budget shortfalls caused by COVID-19. But the agency is going to have to delay some planned work. If you have feelings – or, better yet, thoughts – about how it should alter the timeline for its planned projects, you can provide that input in a survey available online at bit.ly/30t5xFw.

Work on phase 2 of the South Gorge Trail through Peaceful Valley is underway, and Water Avenue will be closed west of Ash Street starting Monday. The $4 million project will construct more of the 10-foot wide pedestrian and bike trail, water main and pavement reconstruction of Clarke Ave, and storm water mitigation at various locations.

Lane closures will be in place starting Wednesday on the east side of the Market/Greene Street corridor at Jackson Avenue as part of a project to relocate city utilities to make way for the North Spokane Corridor.