Lonnie Scott walked down to the Harvester restaurant in Spangle a couple of years ago and suggested they install an electric vehicle charging station.

A parent driving an electric car – “people call them EVs,” he explained – from Spokane to Pullman to visit their kid, for example, might need a jolt of electricity on the way. And while they waited, he speculated, they might stop inside for a bit to eat.

The argument was convincing enough that the Harvester’s owners worked with Avista Corp. to install a charging station in October 2017.

That addition to the Inland Northwest’s growing network of charging infrastructure came as part of an Avista pilot project that initially aimed to install 265 electric chargers in homes, workplaces and public spaces around the region. Ultimately, Avista extended the projected and exceeded that aim, putting in 439 charging ports.

Now, the Spokane-based provider of natural gas and electricity is again investing in electric vehicles, helping to match a $2.5 million grant from the Washington State Department of Commerce to the Spokane Regional Transportation Council for enhance the charging infrastructure in Spokane County.

With major car companies self-imposing deadlines to switch to electric and governments nudging them to make the transition, that infrastructure will likely become integral to the transit future of the region, as gas stations are replaced with high-voltage outlets installed in garages and parking lots. 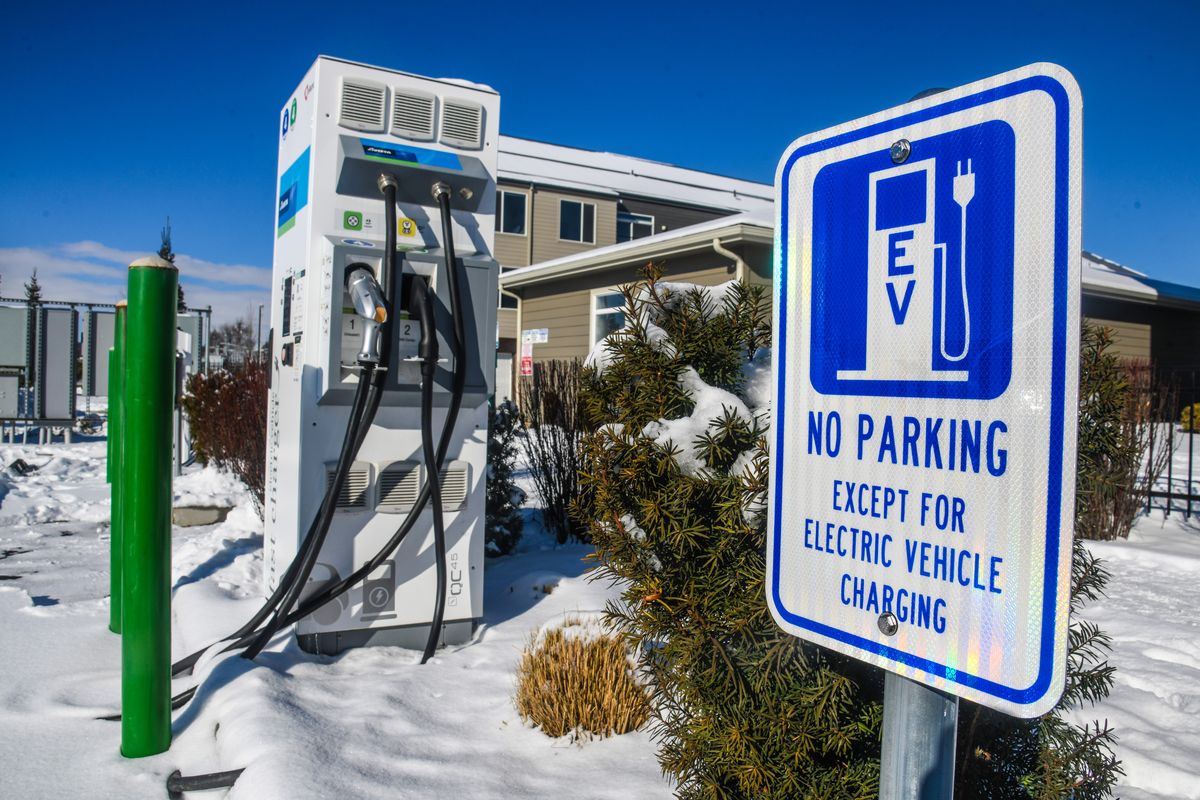 Avista is matching a $2.5 million grant to SRTC for electric vehicle charging infrastructure. This Fast Charger station is located near the corner of Cedar Street and Bridge Ln. in Kendall Yards. (DAN PELLE/THE SPOKESMAN-REVIEW)

Rendall Farley, manager of the company’s electric transportation initiative, argues there are “tremendous economic and environmental benefits” that this switch will bring about.

The company sums those benefits up in its 2020 Transportation Electrification Plan: “Today, driving a passenger EV fueled by Avista’s electricity results in zero tailpipe emissions, causes total CO₂ emissions reductions of 80%, costs less than an equivalent $1 per gallon of gasoline to fuel, and saves $300 per year in maintenance expenses.”

The report goes on to say that a complete switch to “light- duty” electric vehicles in the Inland Northwest would save the region $1 billion a year and eliminate 2.5 million tons of carbon dioxide.

But the company isn’t pushing electric vehicles for purely altruistic reasons. After all, Farley notes, “the way we get revenue is through consumption.” And consumption would skyrocket if everyone drove electric.

Farley said studies suggest a complete switch to electric transportation would “mean that probably 20% to 30% of our electric load” would come from those vehicles.

So what kind of effect would that have on the company’s capacity to produce power?

That depends significantly on when people decide to refill their batteries, Farley said.

If everyone comes home from work at 5 p.m. and plugs in their car, right as they’re also turning on the TV, flipping on the lights and otherwise tapping into Avista’s energy supply, it “could have major impacts on the grid” and “will drive infrastructure costs up,” according to Farley.

To meet that much added demand, he said, the company would have to increase its capacity to create electricity. And that isn’t free for Avista – or for its customers.

He said EV charging could begin to strain the system as soon as 2026, and that impacts could be felt by the end of the decade.

But Farley argues there’s a way for the company and its customers to have their cake and eat it too, to transition to electric cars without having “to pay for expensive power plants” and increase electric rates.

The solution, he said, is for drivers to charge their cars overnight, when the TV, the lights and almost everything else that uses electricity is off.

Such off-peak charging could eliminate – or at least greatly reduce – the need for new power sources, he said.

The question for Avista, then, is figuring out how to get people to resist the urge to plug in during peak consumption times.

That bit of seemingly social programming, though, might actually be a technological challenge.

When Avista initiated its pilot program in 2017, it aimed to both promote EV adoption and to help the company gather “extensive data on charging at home, at work in and the public and how that might impact the grid and the economy.”

Among the questions Avista hoped to answer was whether it could effectively promote overnight charging.

To promote that habit, the company offered customers a bargain: Avista would make it cheaper for people to install chargers at home in exchange for them agreeing to do so during off-peak times.

While customers would pay $200 for the charger, Avista would contribute 50% of the installation cost up to $1,000.

Farley said the average total cost of installation is a little under $1,000, though it can range from a few hundred to several thousand dollars.

Participants had to agree, however, to let Avista program a remote network charger that would only allow them to charge at night, unless they chose to override the system.

Most people were “just fine with that,” he said, with people opting out about 15% of the time.

While that “that bodes well for the future,” he said, the remote system proved expensive and difficult to use, meaning it “costs far more than the benefits you get.”

Though the power company is seeking ways to push people to use their EVs as efficiently as possible, the question of whether they will use them increasingly seems to be answered.

GM has announced it will switch completely to electric by 2035, and other car companies have signaled they too are on the path to phasing out internal combustion engines.

A bill in the state Legislature would mandate that all cars built after 2030 be electric in order to be registered in Washington.

But Scott, the EV enthusiast in Spangle, said people shouldn’t need to be compelled to quit their gas guzzlers.

After years driving two Nissan Leafs, he decided he would just walk to work at Spangle Community Church, where he serves as pastor. But he’s eager to get back behind the wheel of a vehicle without an internal- combustion engine.

The advantages, he argues, are many.

“The only maintenance we had to pay for in the five years we had the Leafs was twice we paid $9.99 for bottles of wax,” Scott said. “Otherwise, there was no maintenance. There’s no oil changes or radiator flushes or tuneups. No exhaust.”

Even the charges are free sometimes. And when you do have to pay, it’s far less than the $30 or $40 it can take to fill up a gas tank.

But there is one disadvantage, he noted.

It’s the feeling in the pit of your stomach that you might not make it to a charger before your battery dies.

When he arrived in Spangle from Gig Harbor, that feeling was common.

“When we first moved here, the nearest charger was in Moses Lake,” he said.

Now there’s one right there within walking distance, at the Harvester in tiny Spangle.

And as the $5 million from the SRTC grant and Avista gets spent, more are bound to pop up.

The connection between Browne’s Addition and downtown via Maple Street will be disrupted through mid-April due to construction of STA’s City Line. Maple Street between First and Pacific avenues, as well as Pacific Avenue between Oak and Maple streets, will close Monday for utility work on the new bus rapid-transit route. The streets will remain closed for two months while work on stations gets underway.

Wall Street between Main and Riverside avenues will be closed Monday for construction.

The south curb lane of Spokane Falls Boulevard between Bernard and Washington streets will be closed through March 15 for Avista work.

·The northbound curb lane of Howard Street between Boone and Mallon avenues will be shifted into the median through March 22 for Avista work.