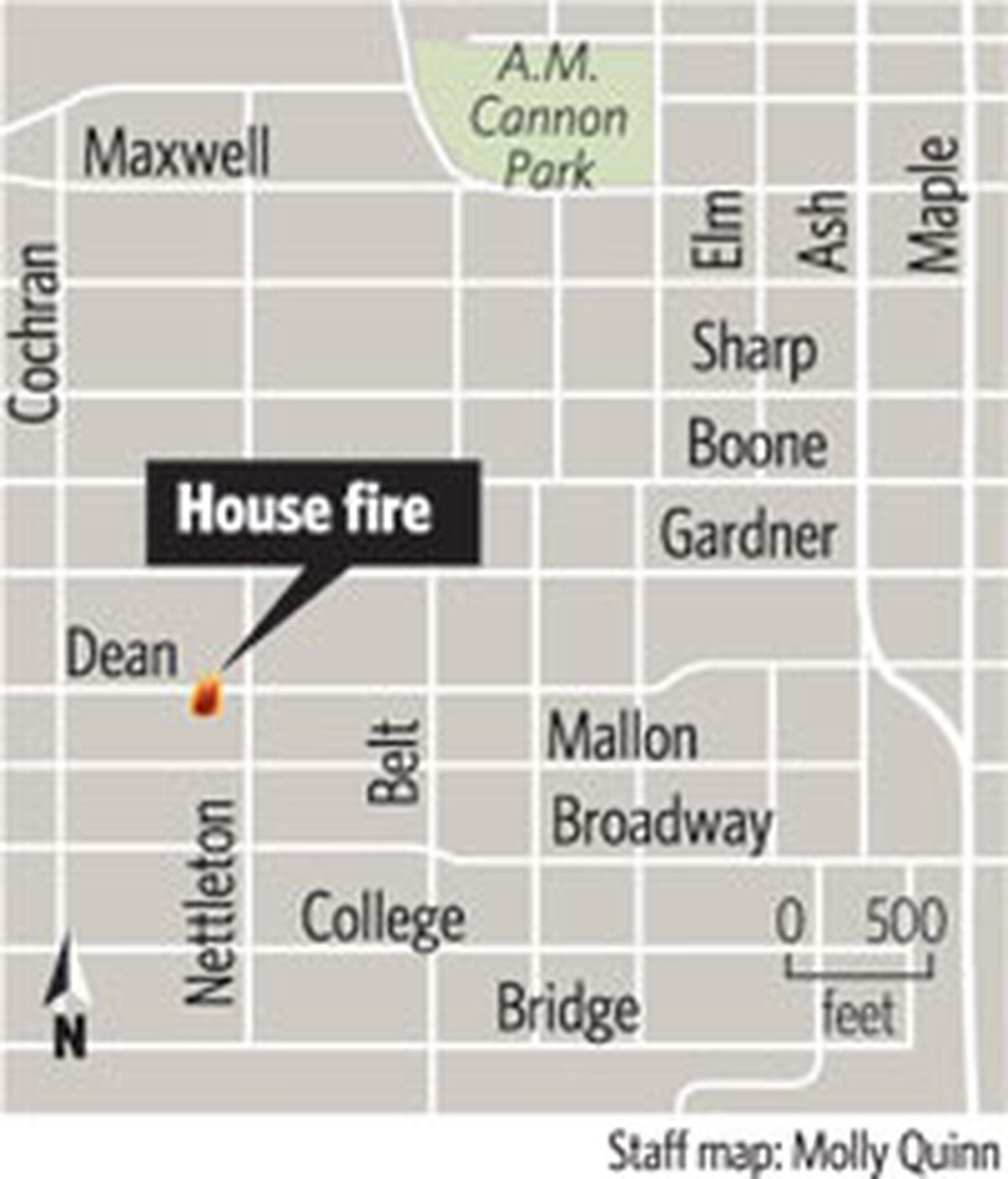 Spokane firefighters rescued a 51-year-old Spokane woman from the second-floor balcony of her West Central home this morning after fire broke out trapping her at least 12 feet above ground. Crews from stations 3 and 4 found smoke coming from the second story of the house at 2317 W. Dean Ave. near North Cochran Street when they arrived to the 7:31 a.m. call. While one crew pulled an engine hose into the house to put out the fire and to protect the victim from potentially spreading flames, another crew placed a ladder to the front-facing balcony, where homeowner Karin Mustard had retreated. Her escape down the indoor stairway apparently was blocked by heavy smoke or fire, officials said. Firefighters helped the woman climb down the ladder to safety. She was initially treated by fire paramedics and then taken to Deaconess Medical Center for treatment of smoke inhalation and possible burns to the face, officials said. He was later released. The fire, which may have started from improperly discarded smoking material, was extinguished within minutes. The fire was under investigation. Firefighters said there were no operating smoke detectors. Lt. Mark Vietzke, of Station No. 4 in Browne’s Addition, said, “It was actually a very small fire. The guys got up there fast.” However, the lethal potential of breathing smoke made the incident an extremely close call for the woman, said Assistant Fire Chief Brian Schaeffer. “This lady had minutes,” he said. Mustard’s son, 16-year-old Sean, said he may have saved his mother’s life. He said after he awakened to water dripping from the second story, he called his mother on a cell phone, apparently awakening her. “I called her. She didn’t sound right,” he said. “She was bawling on the phone, ‘The house is on fire,’” he said. She called 911 and told dispatchers that she could not make it out of the bedroom to get to the indoor stairs to escape. Sean said he tried twice to go up the stairs but was forced down by smoke both times. “I couldn’t even breathe,” he said. He called 911, too, and reported heavy smoke and heat from the fire, officials said. “She was already on the front porch, and the smoke was coming out when we got here,” said Lt. Greg Borg, from Station No. 3 on West Indiana Avenue at North Ash Street. Sean helped evacuate family pets, including a dog and cats. Water mixed with a soapy fire retardant was used to extinguish the fire. Firefighters said they showed up for work about a half-hour before their 8 a.m. shift start and were catching up on the day’s news at their stations when the call came in. They were still dressed in civilian clothing beneath their fire gear. Schaeffer said potential budget cuts and reductions of the on-duty fire force could make rescues like today’s not possible. He said it takes several two-person teams to set up a fire attack, lay hoses, enter a home, search the building and make a rescue. If more than one person is trapped, the larger number of teams is even more critical, he said. Having two neighborhood fire companies with four persons each is key to rescuing fire victims before smoke overcomes them, Schaeffer said. “I think this is a good demonstration of the importance of having neighborhood fire companies,” Schaeffer said. “If we wouldn’t have had the opportunity to have two companies nearly simultaneously arriving, the consequences could have been much worse.” If she had jumped, she could have gotten hurt more badly, he said. Six fire companies responded to the scene with 30 firefighters. The damage was estimated at $40,000.