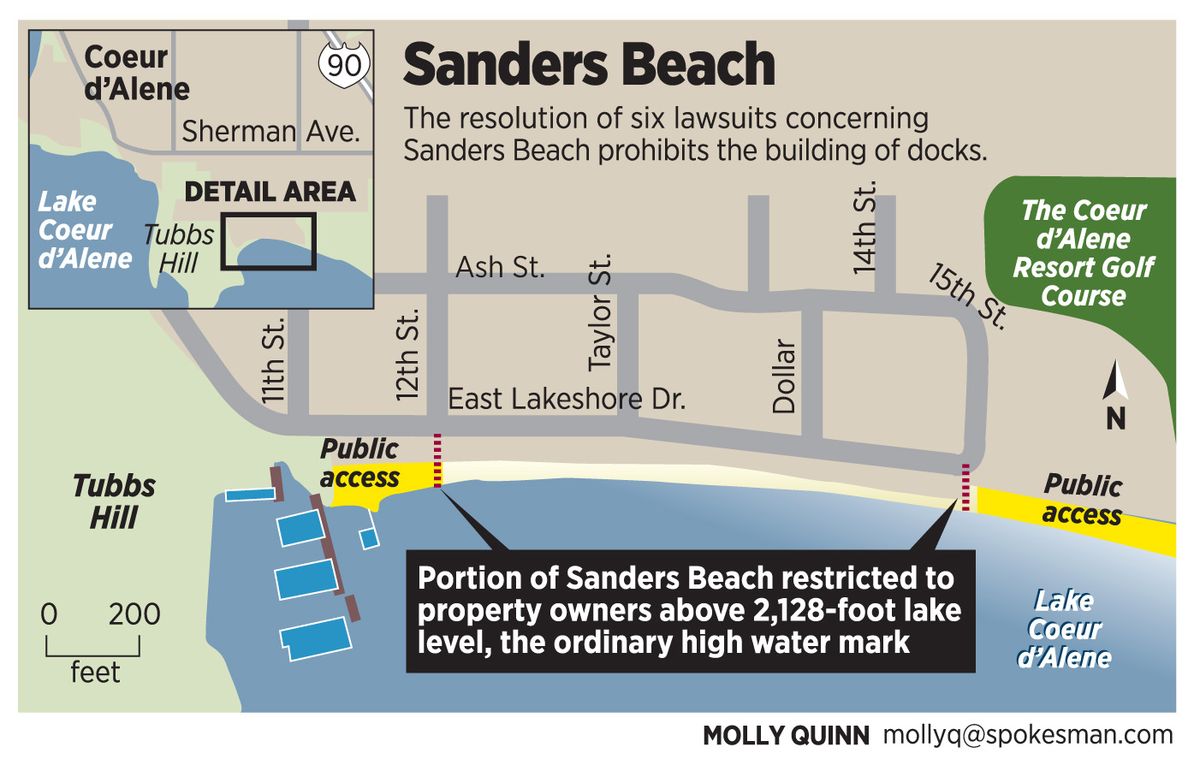 No docks will be built on Sanders Beach.

That’s part of the resolution of six lawsuits dating back to 1998 between the city of Coeur d’Alene and the owners of eight homes on a Lake Coeur d’Alene beach that also offers public access.

“For the first time, there’s some certainty among the homeowners and the public about public access on Sanders Beach,” said Mike Haman, an attorney for the city. “That’s important because summer is coming and the public will know what they can and can’t do.”

Litigation regarding public access to Sanders Beach versus private property rights has dragged on for decades.

“It would appear that every generation, the problem reappears and manifests itself in some different form,” said John Magnuson, attorney for the homeowners. However, he said, this settlement “has injected an element of objective certainty.”

In 2006, the Idaho Supreme Court ruled that the beach above a lake level of 2,128 feet is private property, and several homeowners sought dock permits, which the city opposed. The recent settlement gives the city the homeowners’ dock rights and allows homeowners to erect fences between public and private property at 12th and 15th streets.

Also as a result of settlement negotiations, the city agreed to pay $275,000 to acquire more than 60 feet of beach frontage from two owners, the majority of which expands the public beach west of the 12th Street entrance. The public portions of the beach are at 12th Street and east of the 15th Street entrance. An additional $3,500 was paid to a third homeowner as partial reimbursement of the cost of defending the lawsuit.

Magnuson said his clients are good people who just wanted to have their property rights recognized by the city. Many of them didn’t really want to have docks on Sanders Beach, he said.

Their feeling was, “if you want to take my rights, negotiate with me in good faith,” Magnuson said of his clients. One of the homeowners still has a pending claim against the city seeking reimbursement of costs for defending the lawsuit regarding the high water mark.

A sign posted at the 15th Street entrance to Sanders Beach says “2128” with arrows pointing in both directions to indicate the location of the ordinary high water mark. The beach below that and the swimming area along the entire beach are open to the public.

“It’s a very significant acquisition in my mind,” said City Attorney Mike Gridley of the city acquiring the dock rights. The beach will be “unfettered by docks and therefore motorboats and all that.”