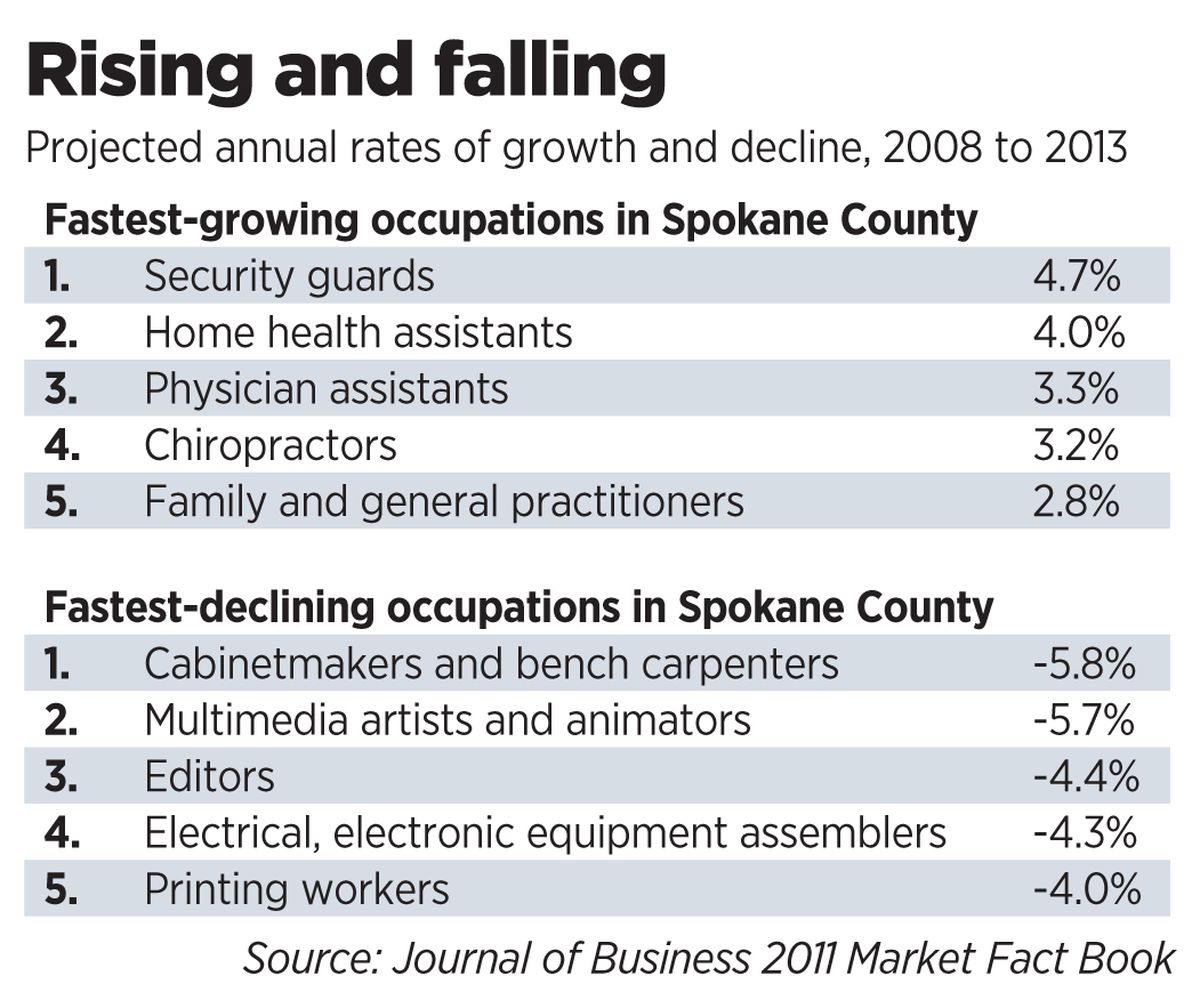 in Spokane County is not in health care or green technology. It can’t be found in casinos or computer labs.

It’s security guard – one of the few bright spots in job growth, thanks in part to a bad economy.

“I think as the economy gets worse and worse, and more people are out of work, people get desperate to find some sort of income, so crime goes up, drug abuse goes up,” Currie said.

Starplex Crowd Management Services, a Northwest firm with a regional office in Spokane, has hired about 17 percent more people this summer than last. The company’s website states “We’re hiring” and lists pay of $8.55 to $12 an hour.

The projected annual growth rate for the occupation of security guard is an average of 4.7 percent from 2008 to 2013, according to the state Employment Security Department.

Currie couldn’t comment specifically on how much business has increased, but said it’s substantial. He also could not comment on how many people are employed by the company, but said across the board, the industry is increasingly hiring new guards.

Adding to the upswing in security guard jobs is that a wide variety of industries uses them, said Doug Tweedy, a regional economist for the ESD. Those industries include retail, manufacturing, transportation, finance, health care and construction.

“It’s an occupation that crosses over a number of different industries,” he said. “So there’s a large number of employers that are hiring security guards.”

Michael Harding, 39, became a security guard as a college student 10 years ago because of the flexible schedule. Harding now is a Navy Seabee in the Reserves who just returned from deployment in Afghanistan and is back full time with Northwest Protective Service. “When I was going through college it was a very convenient opportunity to be able to go to school during the day and be able to work at night,” he said, adding that he enjoys the variety the job offers. “Every site is different, so there’s different things to like.”

The job also appeals to retirees looking to pad their retirement income. Many, like Harding, are retired from the military or police agencies.

The average hourly wage of a security guard in Spokane County in 2011 is $13.61. A guard’s duties are varied, but the primary function of most is to observe and report what’s going on. They patrol industrial or commercial premises and look for signs of intrusion, theft or vandalism, then investigate any disturbances, or work crowd control at large events.

But what makes a good security guard?

Reading comprehension is one of the most important abilities a security guard can have, Currie said. Active listening, social perceptiveness and critical thinking skills also top the list. Guards are required to have at least a high school diploma and must go through training. Christiansen said those hoping to work at Starplex CMS also have to pass an exam to be eligible for employment to make sure their reading and writing skills are up to par.

“People skills is as key as any of the others,” Harding said.

Like any job, working as a security guard has its ups and downs.

“When you work with people, you have the same problems you do with any type of customer service situation where you have to be nice but firm,” Harding said. “I’ve had to run people off of property before.”

Other downsides include working graveyard shifts and having to keep focused even when things are slow.

“It’s just a factor of keeping your mind alert to watch the area because it’s the middle of the night,” he said.

Currie said summer is typically the busiest season because of all the construction projects going on.

“A lot of them need security because sites get broken into, equipment gets stolen, tools get stolen, sites get vandalized,” he said. “You just have to have the protection of somebody on site to deter that stuff.”